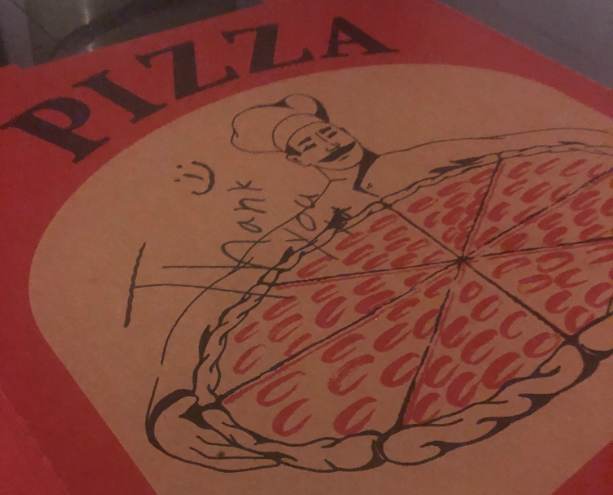 Personal thanks to continuing customers after being caught up in a COVID-19 storm: Photo: Marie McInerney

10am brunch, 1pm Kmart: when the media pokes fun at someone’s lifestyle, it’s harder for the next person to get COVID tested

Introduction by Croakey: Through the pandemic, but particularly since contact tracing has been refined to provide blow-by-blow descriptions of people’s movements in order to highlight potential exposure sites, individual privacy, wellbeing and safety have been at risk.

We’ve seen it to varying degrees, in the naming and shaming of two young women as ‘Enemies of the State’ by Queensland’s Courier Mail, in the vitriol piled on an Adelaide pizza bar and one of its workers, and recently in Melbourne in the mockery of a hotel quarantine worker’s itinerary.

People who test postitive to COVID-19 often go to great lengths to assist contact tracers in tracking their movements during their infectious period.

Victorian authorities have urged people to see the contact tracing interview as a safe space, like a consultation with a doctor, yet when media and others “join the dots” to identify people and treat their private information as entertainment, the case’s right to privacy can be breached.

It can also be counter-productive, write Clare Southerton and Marianne Clark, Postdoctoral Fellows at UNSW’s Vitalities Lab, in an article originally published at The Conversation, warning that if people are afraid of having their movements publicised, they may be less likely to come forward for testing.

Republished below, it echoes similar sentiments expressed last week on Twitter in response to an article in The Age. 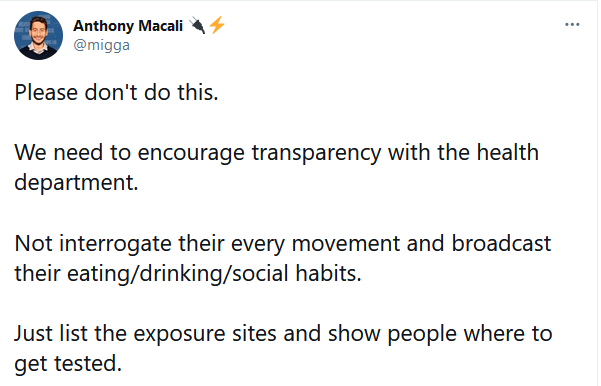 In countries like Australia where infection rates remain relatively low, contact tracing is a crucial defence in our fight against COVID-19.

We’ve seen this recently in Sydney, Brisbane and Perth, and now we’re seeing it in Melbourne as Victorian health authorities battle to contain the Holiday Inn outbreak.

The media can play an important role in sharing official information about new cases, potential exposure sites, and who needs to get tested and isolate.

But it’s important to distinguish between informing and shaming when it comes to sharing details of where people who have tested positive have been.

Read more: What can you expect if you get a call from a COVID contact tracer?

It’s about the language

When the daily itineraries of positive cases are picked apart by journalists or on social media, it’s tempting to join in the fun. This could be driven by fear. It’s scary to think we could have been infected on a trip to the supermarket.

But what can seem like a harmless opportunity to vent or make a joke represents a kind of public shaming, and can actually cause harm.

In a recent case in which a Victorian hotel quarantine worker tested positive, Twitter users were quick to mock not only how many places the worker had visited, but also what the venues said about them.

How the media places blame and responsibility within a crisis like the COVID-19 pandemic shapes how people make sense of these significant events. While an article listing venues may seem harmless (and indeed helpful), the kind of language reporters use can encourage readers to make assumptions about the infected person.

In one widely criticised recent article, The Age described a COVID-positive hotel quarantine worker’s “busy itinerary” and specifically noted they visited “two different Kmarts (yes, two)”. The tone here may make us feel as though this worker was reckless or selfish, despite the fact their “jam-packed weekend” was perfectly within COVID-19 guidelines.

Articles from The Daily Mail described a Brisbane hotel cleaner “roaming” around the city before testing positive and a COVID-positive person in Melbourne who “wandered shops for hours and even had a massage”. This language paints people who unknowingly go about their everyday lives, before testing positive, as foolish and self-centred.

Fear-driven headlines often draw a connection between the infected person and the hundreds or thousands of people who subsequently have to isolate. It’s as if that individual is personally to blame.

What are the consequences?

We know from research on previous pandemics that stigma and shame can discourage people from getting tested, or cooperating with contact tracing.

Recent studies on people who had COVID-19 have found many felt stigmatised, and particularly felt shame at the prospect of infecting others with the virus.

When people infected with COVID are ridiculed or made an example of in the media and on social media, everyone suffers. People may be reluctant to get tested and subsequently to cooperate with contact tracers if they think their every movement is going to be subject to scrutiny and ridicule.

It’s important to note that many people identified in these news articles are frontline workers — such as hotel quarantine staff — with bills to pay and who have little choice but to put themselves at risk. The entire quarantine system relies on these workers, and this public shaming only makes an already tough job much harder.

Is there a better way?

As the virus keeps popping up in Australia, the reality is we are all at risk. We could be exposed the next time we dine at a cafe, do a fitness class, stop by Dan Murphy’s, or go to work.

But public shaming of people who test positive causes real harm. The media can reduce the judgement heaped on positive cases by:

The public can also help by focusing on the relevant facts and their own actions. Remember, this is a stressful time for everyone. We are all working towards the same goal.