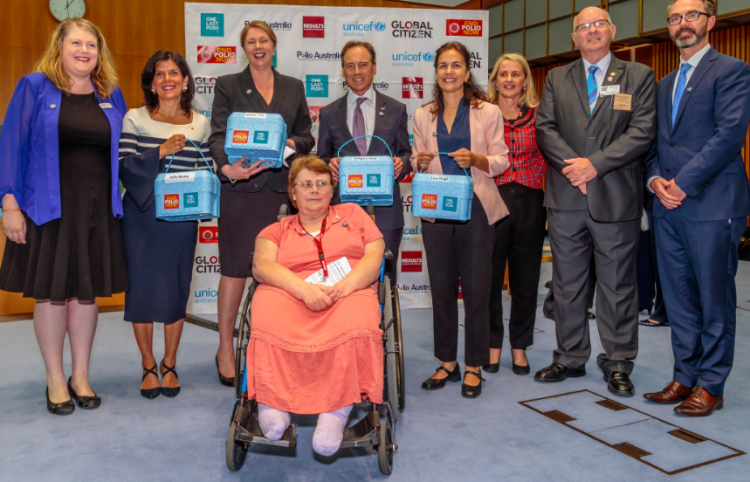 20 years after Australia was declared polio-free, the eradication fight must go on

Today, 29 October, marks the 20th anniversary of Australia being declared free of polio, an infectious disease that terrified the community through the 1940s and 1950s in particular, and continues to impose a “sting in the tail” for polio survivors today.

The world is just a beat away from total eradication, with the disease now only still endemic in Afghanistan and Pakistan, but COVID-19 has disrupted efforts — more than 50 million children worldwide missed their essential polio immunisation this year.

In the article below, Sarah Meredith (far left in the feature image), Country Director of Global Citizen Australia and Gillian Thomas OAM (front), polio survivor and President of Polio Australia, mark the anniversary and call on the Australian Government to commit an extra $10 million to the Global Polio Eradication Initiative and to continue supporting polio survivors in Australia.

As Australia celebrates its 20th anniversary of being polio-free today, cases of this highly-contagious virus continue to circulate in Central Asia, and the battle to reach every last child globally with the polio vaccine is more important than ever.

The 20th anniversary marks the Royal Commission for the Certification of Eradication of Poliomyelitis confirming that, based on a range of evidence, there is no transmission of wild poliovirus in Australia.

It is hard to believe it was only 64 years ago that Australian children were immunised with the Salk polio vaccine for the first time – and Australia must continue to maintain vaccine herd immunity to keep the disease at bay while polio still exists in the world.

While applauding the success of polio immunisation in Australia and acknowledging the critical challenges currently facing the Global Polio Eradication Initiative (GPEI), we must not forget the legacy this terrible disease has left on our country.

For decades before the Salk vaccine became available, polio epidemics had regularly been terrifying our community, leaving thousands of Australians paralysed in their wake – mostly children.

The World Health Organization (WHO) states that one in 200 polio infections will lead to irreversible paralysis. Amongst those paralysed, 5-10 per cent will die when their breathing muscles become immobilised.

Much like COVID-19 today, poliovirus can spread fast, far and wide – and undetected, spreading rapidly before cases of paralysis are seen.

As most people infected with poliovirus have no signs of illness, they may never know they have been infected. However, they are still infectious and can spread the virus.

This means that as few as one case of paralysis can indicate a polio epidemic.

There is no cure for polio; it can only be prevented through immunisation.

It is estimated that 40,000 Australians contracted paralytic polio, plus a larger number of people who unknowingly had a mild, undiagnosed case.

Australia is also home to a number of younger survivors from countries where polio was more recently eradicated or is still endemic.

Polio survivors recall frightening times spent in isolation – their parents were only able to see them through a window and their siblings were often banned altogether.

There was no certainty about how well, or in fact whether, those who contracted polio would recover.

Once out of isolation, parents were only able to visit their children once a week and many had to travel long distances by public transport. Even then, visits were often curtailed because their child would become too upset once visiting time was over. This commonly led to long-lasting feelings of abandonment.

Other recurrent themes are of houses being fumigated, being strapped into splints, months or even years spent away from home undergoing treatments, working hard and long to get movement and function back, and of sounds and smells recalling vivid and often unpleasant memories of those times.

Polio survivors became resilient, driven and successful. But they would rather have been immunised.

Lessons from and threats for polio

The world has fought hard to eradicate polio, and we are 99.9 per cent of the way there but the risk remains.

Despite now only being endemic in just two countries, Afghanistan and Pakistan, polio has the potential to affect up to 200,000 people per year within 10 years if left unchecked.

The COVID-19 pandemic also poses serious threats to eradication goals, after door-to-door vaccination campaigns were paused in March because they did not comply with global physical distancing recommendations.

As a result, more than 50 million children worldwide missed their essential polio immunisations this year.

The race is now back on to recommence vaccination programs.

The world’s efforts to eradicate polio is one of the best examples of global cooperation in health responses and provides the framework for how community-based solutions can be rolled-out on such a mass-scale.

One of the key learnings from polio eradication is that surveillance and mapping of the health response are fundamental to understanding the spread of the disease and how to reach every last child. Likewise, we’ve learnt that attitudes towards vaccination and education campaigns are critical linchpins to success.

The true heart of the polio eradication initiative is its education component, with local vaccinators working in every part of the world in very dangerous locations.

The COVID-19 response will need to draw from the learnings of the polio response as it is truly one of the great success stories of our world. These initiatives take time and require confidence from the community in the vaccine, which any COVID-19 vaccine will need.

The pausing of polio vaccination programs in 55 countries and accompanying social distancing measures have reduced COVID-19 risks for communities and frontline workers in the developing world.

Meanwhile, the wealth of experience, and the resources and infrastructure of the Global Polio Eradication Initiative (GPEI) are now being utilised by national governments to help address the challenges of COVID-19 in multiple ways, including crisis response, risk communications, and disease surveillance.

But this shift in priority this year means that the polio program is now facing a major budget shortfall, and more support is needed to get back on track for polio eradication while also keeping everyone safe from COVID-19.

Sting in the tail

Australia has been an incredibly generous supporter of the Global Polio Eradication Initiative (GPEI), committing $113 million since 2011 – but there is now a need for extra funding borne out of unique and unforeseeable circumstances.

That is why we have launched a new campaign seeking further federal funding of $10 million to help bridge the funding gap. You can go to www.globalcitizen.org right now to take action and ask Australia’s Foreign Minister Marise Payne to make this new commitment.

For those for whom the vaccines came too late, there is a “sting in the tail” of the virus. Years after contracting polio, survivors can develop a range of biomechanical and neurological symptoms now recognised as the ‘late effects’ of polio.

The time lag from the initial infection to this second phase varies but is commonly around 30 years. The onset is usually slow and steady. It may occasionally develop suddenly and progress at an irregular pace. Symptoms sometimes emerge after a period of physical or emotional strain, or after a period of immobility.

The late effects cause a range of debilitating health effects. Support is therefore also crucial for polio survivors and will be needed for an estimated 90 years after the final polio case.

A federal grant provides Polio Australia with funding to educate health and medical professionals on the late effects.

This one-of-a-kind initiative bridges knowledge and generation gaps, better enabling the health management of those Australians who have been affected by polio. This is absolutely critical. We hope this will continue until the last Australian polio survivor needs it.

The hope of a polio-free world is in our grasp. We cannot stop at the final hurdle, and an increased effort now will save lives.

It should give us all hope – in a time where fear is high, that if we come together – we can beat this deadly, preventable disease.

Contact Polio Australia at www.polioaustralia.org.au for more information and support.

PrevPrevious“The genie is out of the bottle, we have to turn down the heat” – A grim milestone heralds a grim future
NextNow is the time for Queensland to invest in prevention and public health. If not this year, when?Next