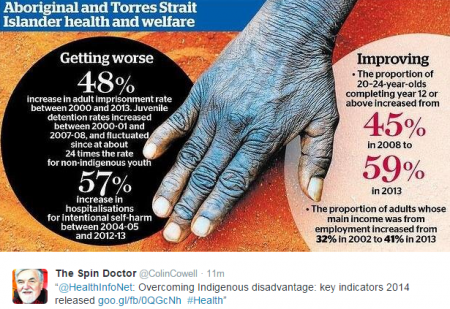 The 2014 Overcoming Indigenous Disadvantage (OID) report has been released today. Regarded as the most comprehensive report on Indigenous wellbeing in Australia. it’s the sixth in a series that emerged out of the final report of the Council for Aboriginal Reconciliation in 2000.

See the snapshot of its key points here (pic below) and in this video, which seeks to focus on issues around strength, resilience, and protecting culture as well as alarming rates of continuing disadvantage on a number of indicators. 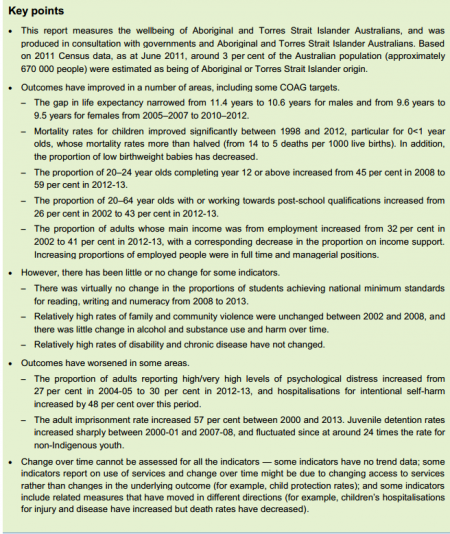 Indigenous Minister Nigel Scullion said in a statement that the report “reinforced the Abbott Government’s priorities in Indigenous Affairs”.

“This Government has established three clear priorities in Indigenous Affairs; getting children to school, adults into work and ensuring communities are safe.”

But as the National Aboriginal Community Controlled Health Organisation (NACCHO) points out in its media release (see full statement below), the report puts a spotlight on current government policies and/or gaps in policies that put Indigenous health and wellbeing at risk, including the proposed $7 GP copayment, threat by the Western Australian Government to close down remote Indigenous communities and failure to re-commit to National Partnership Agreements.

The National Aboriginal and Torres Strait Islander Legal Services (NATSILS) statement says it welcomes recognition of the report that socio-economic disadvantage and changes to laws and judicial processes “underpin” the continued rise in over-incarceration of Indigenous people in Australia.

“Higher rates of disadvantage, over-policing, more restrictive approaches to bail, mandatory sentencing, and a lack of non-custodial sentencing options in regional and remote areas are having a disproportionate impact on Aboriginal and Torres Strait Islander peoples and bringing them into contact with the criminal justice system at a greater rate.”

Aboriginal and Torres Strait Islander Social Justice Commissioner Mick Gooda and the Co-Chair of the National Congress of Australia’s First Peoples Kirstie Parker, said the report provides hard evidence of both the successes and failure of initiatives to overcome Indigenous disadvantage.

The release of the Overcoming Indigenous Disadvantage report today shows that despite some gains, we still have a long way to go, with persistently high rates of disability and chronic disease in Aboriginal people and increasing rates of self-harm and incarceration.

Incoming National Aboriginal Community Controlled Health Organisation (NACCHO) Chairperson Matthew Cooke said he was concerned about the impact of policies being proposed by state and federal governments, such as the GP co-payment and closure of remote Aboriginal communities, and a failure to re-commit to joint, coordinated efforts such as through National Partnership Agreements.

“We must celebrate the significant gains that have been made in areas such as infant mortality and life expectancy which are the result of concerted efforts across all levels of government over a number of years,” Mr Cooke said.

“We need continued investment if we are to close the gap further in these and other areas.

“National Partnership Agreements have lapsed, the COAG Reform Council has been disbanded and we don’t have anything in place of either to ensure the focus stays on improving the health and well being of Aboriginal people.

“The solution to these issues lies in building strong and resilient communities by reinforcing localised decision making, encouraging cultural identity and fostering connection to Country.

“Shutting down remote communities and forcing Aboriginal people to move to other communities, such as is being proposed in Western Australia, will only make matters worse.

“We also need greater consistency and resourcing on the ground for delivery of Social Emotional and Wellbeing (SEWB) programs. Where these are in place in our services they are reaping results as evidenced by a report from the Australian Institute of Health and Welfare into Aboriginal community controlled services.

“The fate of many of the SEWB programs currently lies with the Federal government’s Indigenous Advancement Strategy and we call on the government to make the right decisions to ensure these successful programs continue.”

Mr Cooke said the lack of progress in tackling the high levels of chronic disease and disability emphasises the importance of making primary health care as culturally appropriate and accessible as possible.

“Our sector remains very concerned about the impact of the proposed GP and PBS co-payments. We need to encourage Aboriginal people to have regular check ups and manage their health conditions properly, not add barriers to them seeking the health care they need.

“Aboriginal Community Controlled Health Services are making inroads in getting Aboriginal people in the door to see a doctor or specialist and manage their chronic health conditions.  They also employ and train large numbers of Aboriginal people – as seen in the recent NACCHO economic benefits report.

“Better support for, and expansion of, our services would help to reverse some of the poor health statistics we see in today’s report over the long term.”

PrevPreviousPM’s “Nothing but bush” & threats from WA and SA to close down remote Indigenous communities
Next“Do not turn our people into fringe dwellers once again”: Fitzroy Crossing groups on threats to close WA remote communitiesNext