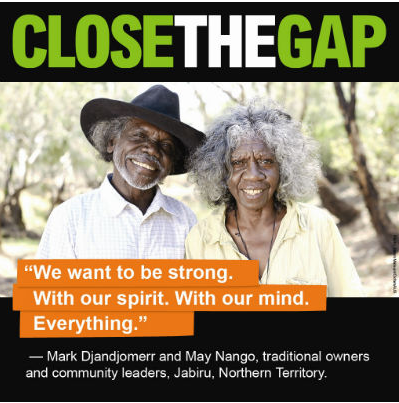 *Post updated with new statement from Close the Gap campaign

Close The Gap Campaign Co-Chairs Kirstie Parker and Mick Gooda have called on the West Australian and Federal government to properly assess the health and wellbeing impacts of closing remote communities in WA, saying decisions that are being made without consultation are “premature and damaging”. See their Op Ed published on The Drum.

In their 2015 #closethegap statement, Parker and Gooda also warned against ongoing insecurity around Indigenous funding and referred to comments like the Prime Minister’s stand that living in remote Indigenous communities was “a lifestyle choice”:

“The anxiety and uncertainty experienced by our communities because of recent funding cuts and misjudged rhetoric can only be addressed if governments work constructively with our people on long-term initiatives. Real and sustained engagement with our communities is one of the critical success factors.”

Today is the 9th National Close the Gap Day – Australia’s biggest public movement for health equality – and will see a record number of nearly 1,550 events across Australia.

A national day of action has also been called for today against the plans to close WA remote communities (see tweets, below). Twitter users can follow at #SOSBLAKAUSTRALIA #NOconsent #lifestylechoice. 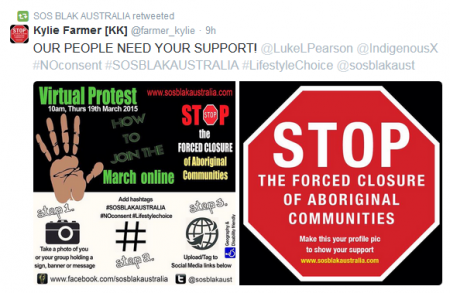 Close the Gap partner Oxfam Australia is urging Australians to write to the Prime Minister and senior Ministers to express concern over the WA remote communities plan and funding cuts.

“There is no room for complacency. Funding for anti-smoking initiatives must continue and we need to fund new initiatives that target chronic conditions such as diabetes, otherwise momentum will be lost.”

Croakey thanks Sandra Thompson, Emma Haynes, and Judy Katzenellenbogen from the Western Australian Centre for Rural Health at the University of Western Australia for sharing the findings of the timely report: Improving the Heart Health Story for Aboriginal People in WA.

Their post below highlights the many complexities involved in both detection and treatment on tackling heart disease in Indigenous people, and the benefits to be won through comprehensive and culturally-wise approaches. 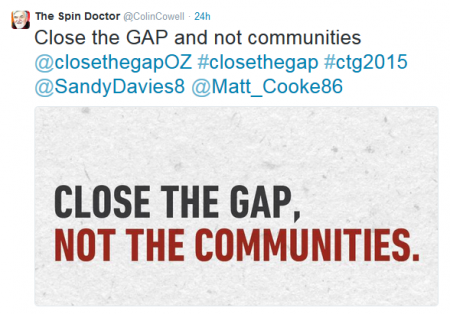 Aboriginal lifestyles could fix the hole in the heart of Australia

Tackling cardiovascular disease (CVD)for Aboriginal and Torres Strait Islander (hereafter respectfully referred to as Aboriginal) people can make a big impact on bridging the health gap. This is because CVD is the major cause of death for Aboriginal Australians and contributes 23 per cent of the excess burden. So what is the delay? Where do we start?

It was not so many years ago that the Australian Institute for Health and Welfare (AIHW) released a report which showed that Aboriginal people who were hospitalised with heart disease were not receiving cardiac revascularisation procedures at the same rate as non-Aboriginal people.

At around that time, the Heart Foundation WA convened a breakfast meeting in Perth with a small number of cardiology leaders to discuss the issue. Cardiologists who work in public hospitals proclaimed their astonishment at these findings – they thought that the data must be wrong, for Western Australia at least.

The discussion covered their certainty that they treated patients identically in relation to the level of disease, adding that of course treatment depends upon the state of a patient’s coronary vessels. Additionally, Aboriginal people may have had more diffuse disease that made them unsuitable for grafting or stenting.The message was that unpacking disparities in care is going to be a complex story.

Since that interchange, we have undertaken a large body of research investigating disparities in heart disease and medical care between Aboriginal and non-Aboriginal Western Australians. The results from this work is summarised in our recently released stakeholder report Information for Action: improving the heart health story for Aboriginal people in WA.

This report, unlike the AIHW report, analyses linked administrative data. Rather than being limited to unlinked admissions and death records where records belonging to the same person cannot be differentiated, linked data yields counts of people, avoids double counting, and can follow people up to determine outcomes. This means there is the opportunity to get a lot more information on individuals in terms of their history and what happens to them after an event that lands them in hospital.

And it turns out that the cardiologists were speaking the truth, but their own truth, and that tells only a small part of the story. So, when an Aboriginal patient is admitted to a major tertiary hospital, we did not find evidence from our data analysis that there was any systematic bias in the medical management of those patients – when you take into account characteristics like age, whether they live rurally and what other health conditions they have. And the cardiologists were right, they did have a lot more co-morbidities, particularly diabetes which is known to result in more diffuse vessel disease which may preclude revascularisation procedures.

But of course, the picture is a lot more complicated than that. If you look at the distribution of where Aboriginal people live, they are much more likely to live in rural and remote areas. So of course it is difficult for Aboriginal people to even get to a cardiologist in a Perth hospital – out of hospital deaths were not even part of the figures included in the AIHW report, but it is a part of the whole Aboriginal cardiovascular disparity story.

There is also an issue of medical staff in rural hospitals not transferring patients to Perth where they need specialist care. Even that may not be the doctors’ choice, because one part of the disparities story is that the rural hospital doctors may just not be able to find a bed for a patient in the tertiary hospital, unless they have a heart attack that unambiguously reaches a certain level of severity (ST elevation on an electrocardiogram).

This is a bit less of a problem for non-Aboriginal patients who are much more likely to have private health insurance that allows them another option for getting a bed in a private hospital where they can get treated (but still a problem for the rural uninsured).

And it isn’t even just a rural thing – the same issues are there for Aboriginal people in the metro area too. In analyses that adjust for age and sex, Aboriginal are less likely to have diagnostic angiograms which are needed before revascularisation can happen.

But hang on. In real life, Aboriginal people are generally around 15 years younger when they present with their heart attack. And they do have all those co-morbidities. And less than 3 per cent of Aboriginal people have private health insurance. And they are more likely to live in rural and remote areas where there isn’t access to such good medical care, and certainly not access to the facilities and specialists that we would want when there is a major heart problem.  So you can’t just magic all that way by adjusting for it in a statistical model and say that nothing is going on.

And there is more. When we looked at other cardiac conditions such as heart failure and atrial fibrillation, a common problem of heart rhythm, pretty much the same things apply.  So we are talking about all sorts of cardiovascular disease. And when we say more, outcomes also depend on what happens once patients leave hospital, so how do Aboriginal patients fare?

So if they make it to hospital, are treated and survive – even if they do receive the equivalent treatment in hospital –they then go back to where they live and don’t do so well. We can assume that has to be due to their lack of resources – knowledge, understanding, access, finances and so on – or that they don’t get as good care for their needs in the primary health care setting.

So where does that lead us? The building blocks of solutions to address the pyramid of Aboriginal heart disease encapsulates the way forward (see Figure, below), with efforts commensurate to the causes. 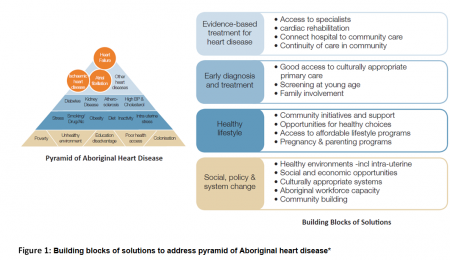 We must remember first of all that the most important thing will be for Aboriginal people to have mastery over their own lives. If we just addressed poverty, stress, racism and lack of social inclusion, Aboriginal people would be less likely to have heart disease at younger ages and to die early. And that impact will be across all health issues, not just cardiovascular disease. Inequalities in health reflect inequalities in wealth with the attendant impacts on life opportunities, exposures and stresses that result. This is an inescapable and already well understood fact.

However, while a key focus must be on addressing the social determinants of health and equity, this does not relieve us from the obligation to ensure high quality health care that meets the needs of Aboriginal people. Patient-centred care must by definition be culturally appropriate and that needs to be evident across the care continuum.

There is already good evidence of the importance of investment into effective models of primary health care, and in this instance it is essential, first for its role in primary prevention and then for the essential ongoing management of disease and secondary prevention. We need better integrated care, with all Aboriginal patients having appropriate discharge planning by clinicians who understand what is and isn’t available for the community to which they are returning and that support ongoing management in primary health care with specialist input as needed. Increasing health literacy for patients so that they understand their condition and are better supported in managing it optimally is essential.

Of course, so much of this has been said before. However, the body of the research summarised in this report gives us much better information on where enhanced efforts are needed. And what we are particularly proud of are the suggestions that come from evidence and the collective wisdom of the Aboriginal and non-Aboriginal people who have been working at the coal face to make a difference in this space. This includes practical information to support action at many levels to improve Aboriginal cardiovascular disease.