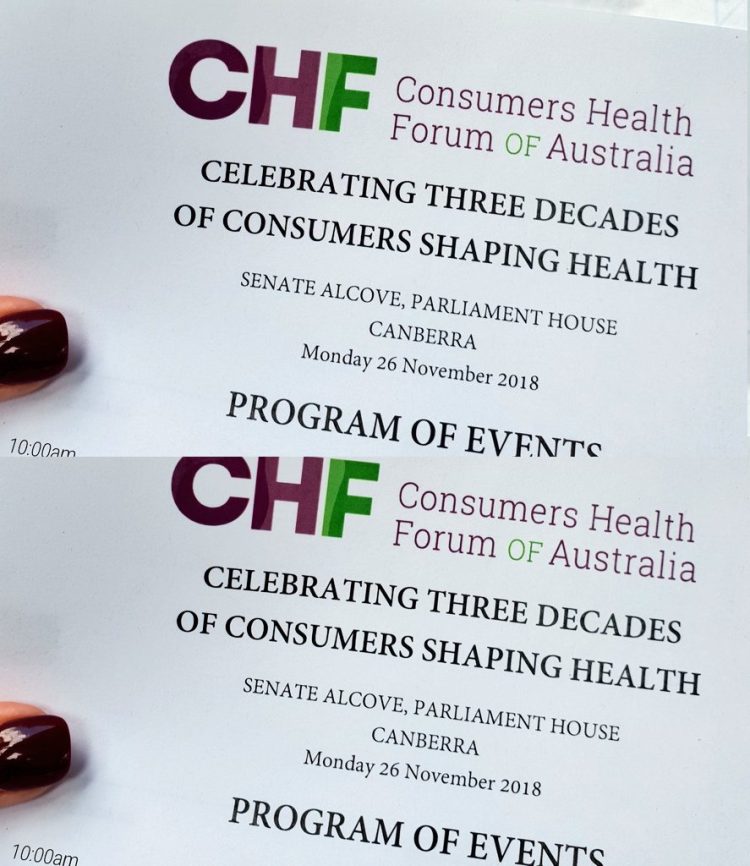 Introduction by Croakey: A trailblazing consumer health advocate, the late Sheila Rimmer, once told me about an experience from her early days as a consumer representative on a medical research committee.

At one meeting the committee was discussing a proposal for a research project into maternal deaths in childbirth. When Sheila suggested the need for consumer input into the project a male doctor leaned over the table and explained to her patiently that, sympathetic as he was to involving consumers in medical research, in this case it would SIMPLY NOT BE POSSIBLE as all the relevant consumers were ALREADY DEAD(!).

It’s been over 30 years since this exchange took place and much has changed in relation to the role of consumer advocacy in heath care.

Despite initial resistance from many health professionals, health service managers and policy makers, it would be hard to find anyone today who does not believe that consumer advocacy has overwhelmingly improved our health system.

A new white paper, Shifting Gears – Consumers Transforming Health, released by the Consumers Health Forum of Australia today, acknowledges this progress and the gains made by the pioneers of the health consumer movement in Australia, such as Sheila. It also lays out some future directions for consumer advocacy within our health system.

The paper has been developed with input from over twenty well-placed advisers to mark over three decades of advocacy by CHF on behalf of consumers and national patient organisations.

Health Minister Greg Hunt paid tribute to the leadership of his predecessor Neal Blewett during the early days of the HIV/AIDS epidemic.

Richard di Natale also expressed concern about the affordability of health care and the threat of an evolving two tier system where many Australians do not get equal access to care.

Below, CHF CEO Leanne Wells explains some of the key themes and recommendations made in the paper.

Health consumers in the 21st century are assuming new power that is giving them more influence and choice over their care and the wider health system.

Changes to health care are going to accelerate at an unprecedented pace, driven by  advances in medical knowledge, technology digitalisation, genomics and consumer expectations.

Shifting Gears sets out the transformational changes needed to deliver a person-centred health care system and a program for training and developing health consumer leaders in a range of roles which would foster more dynamic and responsive health care.

CHF has worked to bring consumer insights to national health policy for over thirty years. Despite all that CHF and others involved in consumers shaping health have achieved, there is still a way to go for the role of consumer advocate to be truly valued, and for the system to be truly person-centred.

A person-centred health system requires important shifts in policy. These include from illness to wellness to renew focus and investment in  preventative health and integrated primary care in the community.  We also need to see a shift from low to high value care which involves making smarter use of health care budgets, stripping out waste, spending less on low-value interventions and more on effective health activities.

@CHFofAustralia founding leader Phillipa Smith (with Louise Sylvan) on the genesis of the organisation in 1985 ‘Our concern was around the lack of consultation with consumers. Gaps and lack of action on important issues.’ pic.twitter.com/88G71PutvJ

Shifting from provider-centric to consumer-centric services will drive better patient outcomes, as will locally-responsive services.  Shifting Gears proposes eight key roles for consumers. The role of the consumer advocate is not one-dimensional. They can serve as change agents, policy influencers, educators, research collaborators and community mobilisers.

There is no more important investment than equipping the consumers of our health system with the means to use their knowledge and experience to drive improvement and innovation in health care.