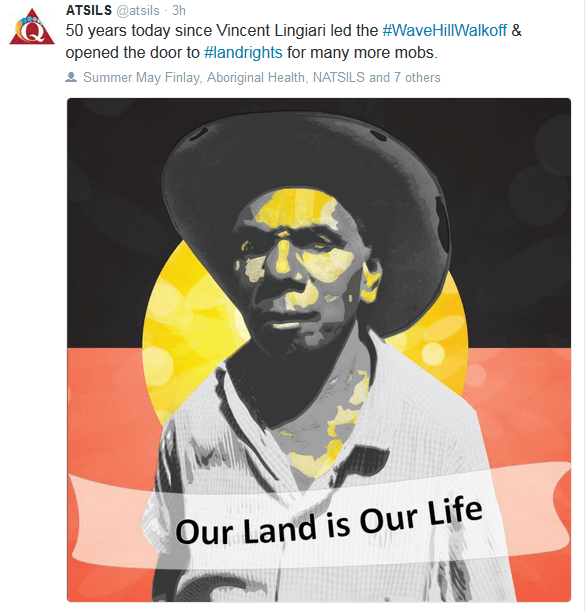 50th anniversary of the Wave Hill walk-off: “in tough country, under tough treatment, the Gurindji were tougher”

Thousands of people from across Australia, including descendants of Eddie Mabo, last week travelled to the remote Aboriginal community of Kalkarindji to mark the 50th anniversary of the legendary Wave Hill walk-off.

They paid tribute to the courage of 200 Aboriginal stockmen, house servants and their families who walked off the Wave Hill Cattle Station in protest of unequal pay and appalling living and working conditions, paving the way for Aboriginal land rights.

Among those at Kalkarindji for the re-enactment of the walk-off were Richard Weston, CEO of the Healing Foundation, and Pat Turner, CEO of the National Aboriginal Community Controlled Health Organisation (NACCHO). Croakey thanks them for sharing what it meant for them, and for health and healing, in the posts below.

This essay from The Conversation on ‘The untold story behind the 1966 Wave Hill Walk-Off’ also makes for powerful reading. And thanks to many people who tweeted stunning images from the commemoration events: we’ve included just a small selection below.

I was privileged over this last week to attend the 50th anniversary of the Wave Hill walk-off when the Gurindji people, led by Vincent Lingiari, made the decision to no longer keep working the Lord Vestey owned Wave Hill cattle station for low wages and rations.

This act by a group of peaceful, yet defiant, traditional owners is widely acknowledged as the birth of land rights movement. The Gurindji walked off in 1966, 10 years later in 1975 Gough Whitlam handed over the deeds to the land to Vincent and declared that they now owned their country in the eyes of Australian law.

This was the iconic moment when Gough, as he handed these deeds over, bent down, picked up a handful red dirt and let it pour from his hand into Vincent’s. It is one of the most powerful images in Australian history and Indigenous Affairs history, captured so powerfully (and I’m led to believe directed by) photographer Merv Bishop. It is a moving moment for many Indigenous people, myself included. If you watch the film of that moment with the Kev Carmody/Paul Kelly penned ‘From Little Things Big Things Grow’ playing in the background it can’t help but bring forth a deep emotional response.

This was my first visit to Kalkaringi and I hope it won’t be my last. I would love to bring my sons to this country one day. To immerse them in the history of this moment and to see what it means to stand up to power and greed. 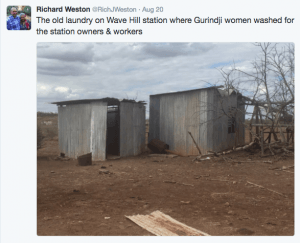 I had the opportunity to travel out to the Wave Hill station with a group that was led by Pauline Ryan who, as a 20 year old woman, walked off Wave Hill and by one of Vincent’s granddaughters who showed us where the Gurindji used to live. We began our tour under an old tree situated next to a dry creek bed that used to be the women’s camp. Pointing back towards where we had come in the women explained the two tin sheds where the women used to do the laundry for the station workers. The sheds are still standing but the Manager’s quarters are now rubble. We wandered across the creek to where the old Wave Hill Station stood, also now rubble, but where an interpretive structure now stands that tells us what used to be there.

The ladies pointed out a pair of old trees and told the group that that is where the women used to give birth to their babies. In a nostalgic throw to our traditional ways the first reaction was awe that there are some 50 year old plus men in Kalkaringi who were born under that tree. When I reflect though, I am struck by the fact that where the old homestead was is only about 50 metres from where women went through the ordeal of childbirth, whilst the bosses sat in the comfort of their homestead. They would have been able to hear the cries of the women in labour. I feel a mixture of sadness and anger about how those mothers experienced the birth of their children under a tree only stone’s throw from a comfortable bed. 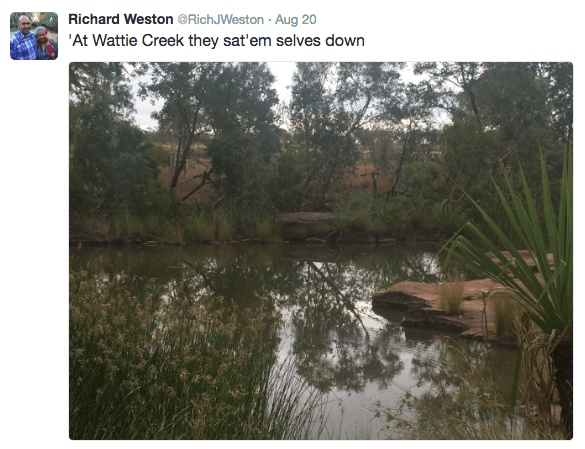 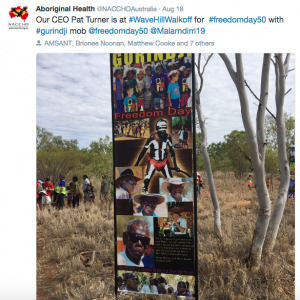 The 50th Anniversary of the Wave Hill Walk-off was proudly sponsored by NACCHO and the Central Australian Aboriginal Congress (Alice Springs). Land is central to our culture and our health and wellbeing.

We recognise the courage and strength of the late Vincent Lingiari and the Gurindji people for their determination and long suffering commitment to stand up for equal wages and land rights for all our people.

We also pay tribute to the late Daniel Dexter and Frank Hardy for their uncompromising support of the Gurindji people.

We were very honoured to be on Gurindji land and reflect on their achievements under such harsh conditions.  We will never forget their contribution to setting the scene for Land Rights in the Northern Territory first and then elsewhere around Australia.

We were also proud to meet many of our colleagues from Katherine West Health Service which provides ongoing comprehensive primary Health Care Services to the Gurindji people and all our people living in the western region communities. Katherine West Health Service staff do a great job and we take our hats off to them. Keep up the great work and we at NACCHO will support you as much as possible. 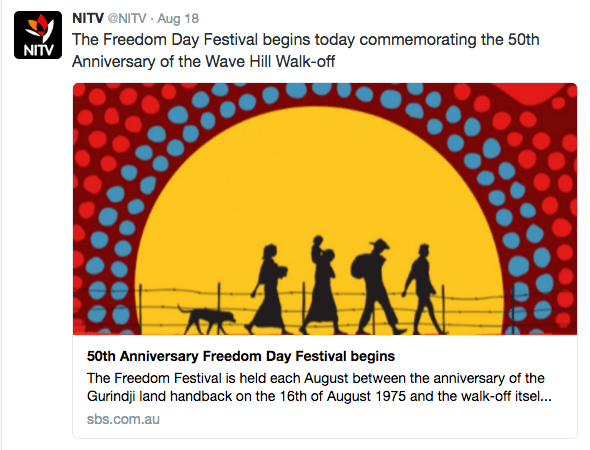 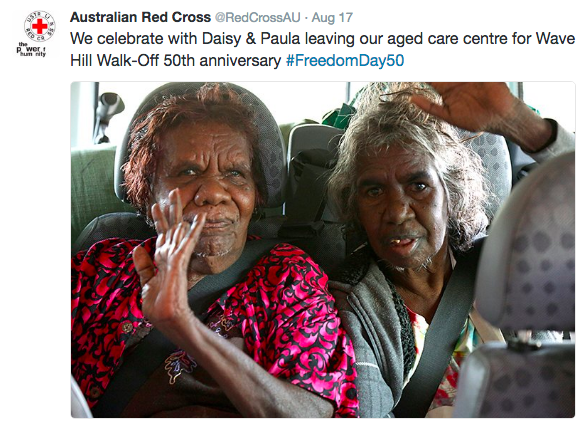 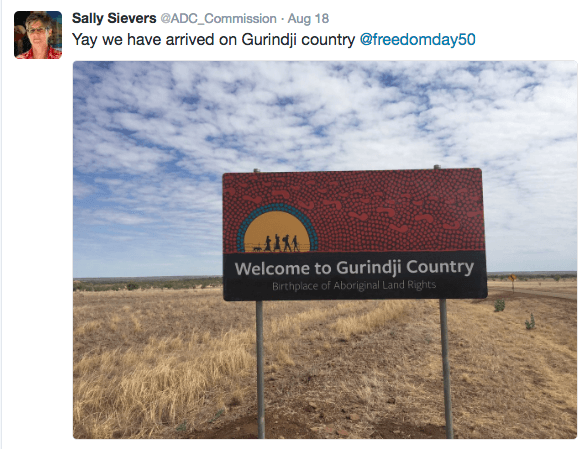 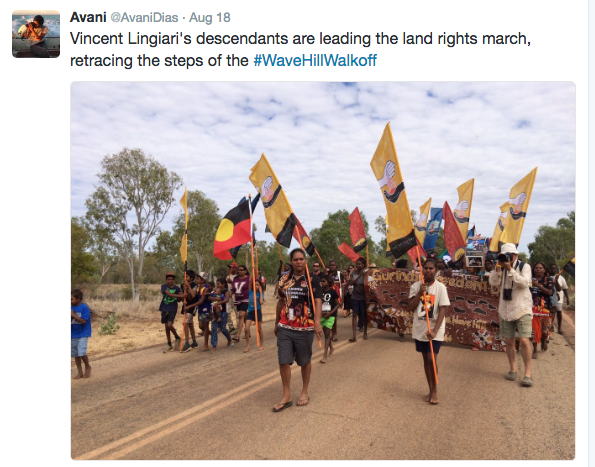 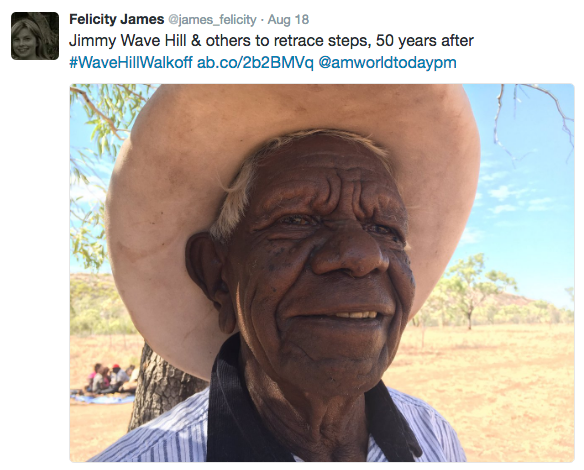 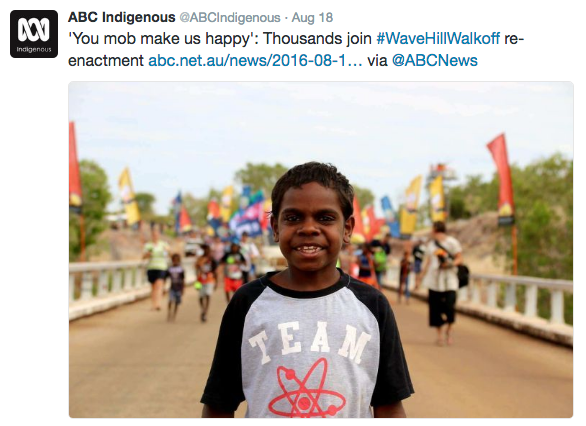 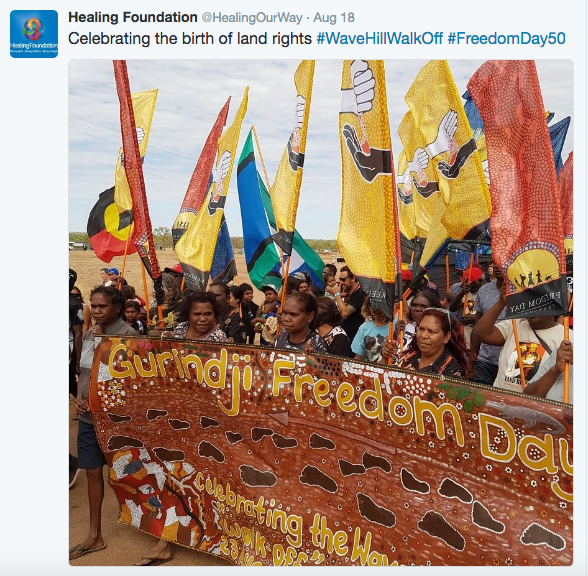 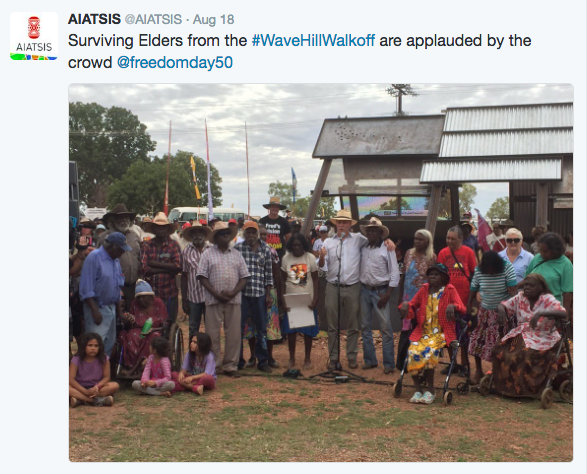 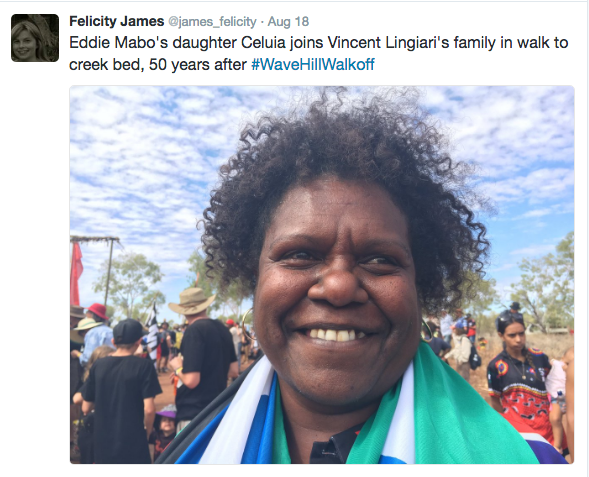 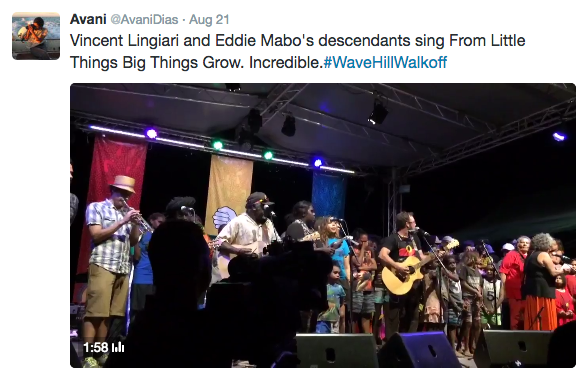 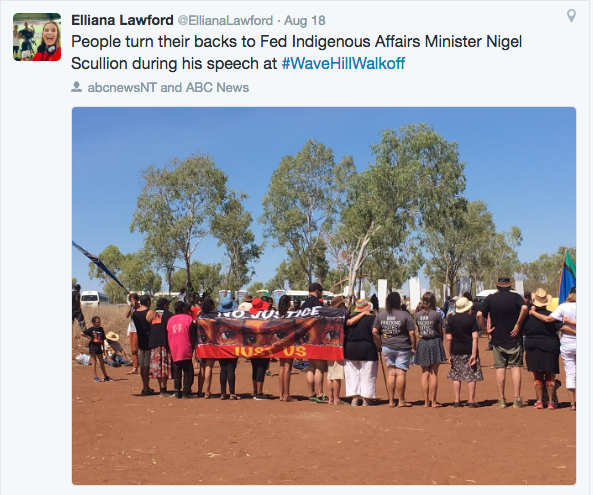 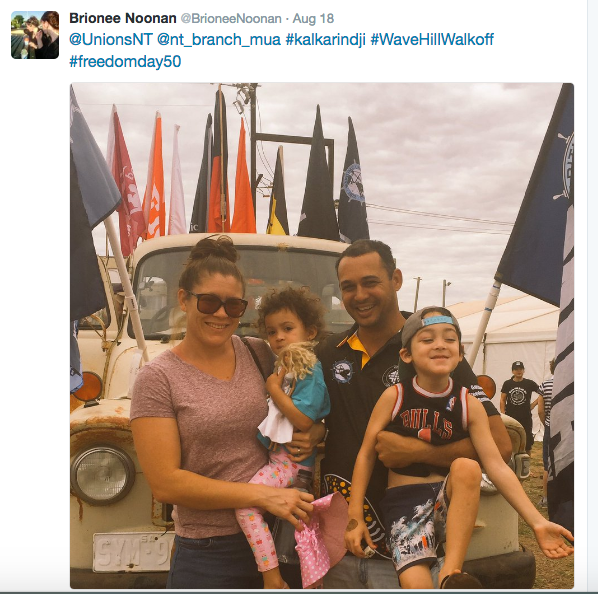 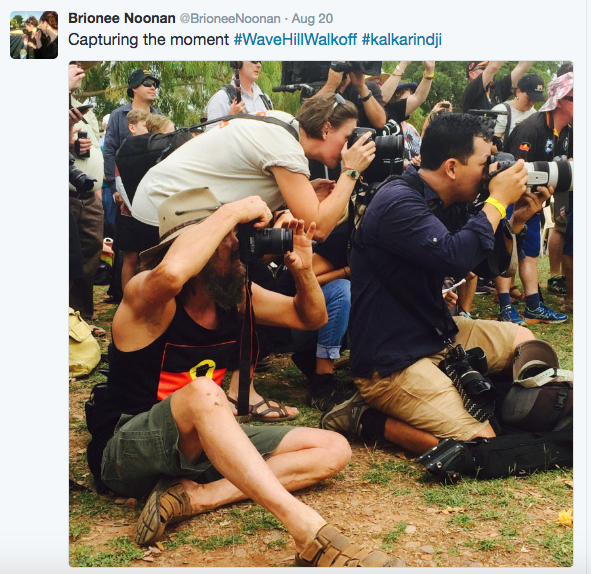 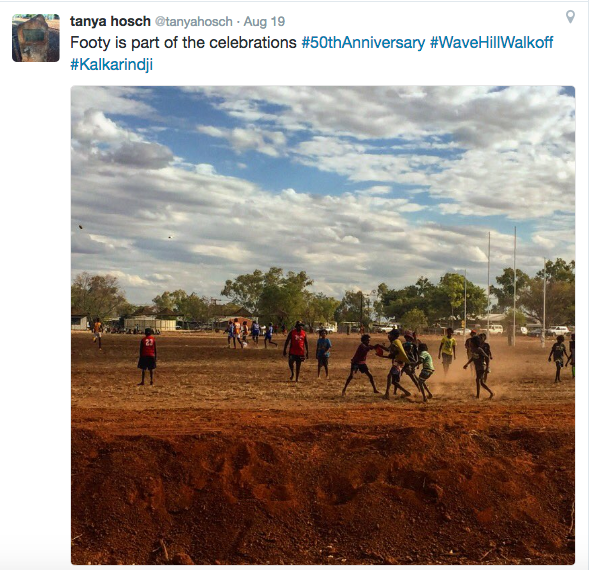 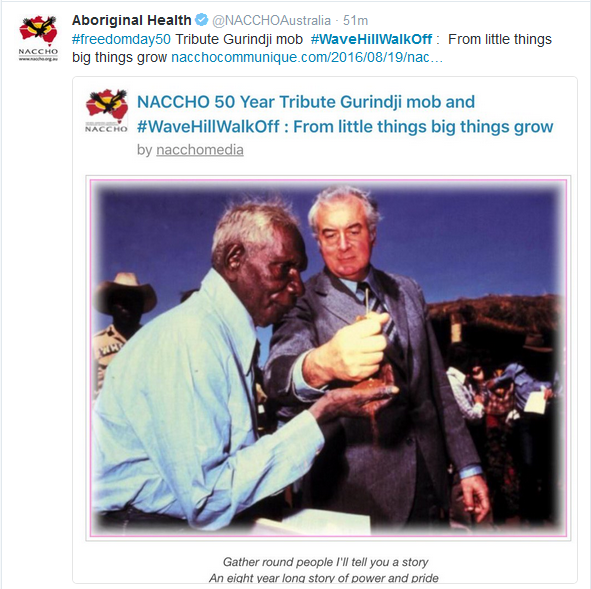 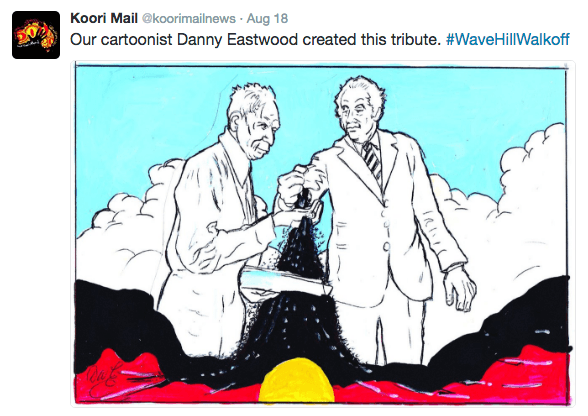 PrevPreviousResearch to look at role of community health in 21st Century wearable health technologies
NextCalls for end to ABC, Monash partnership with SwisseNext