From the NHMRC Centre of Research Excellence on the Social Determinants of Health Equity (CRE) website.

A briefing for the new government: delivering a healthy fair go for all

While political parties, candidates and MPs await their fate from the July 2 election, it might be better for their health, and the health of the country, to look away from today’s resumed count and listen instead to this Radio National Big Ideas broadcast on: ‘A fair go for all’.

At the very least, instead of being tempted to lurch to the right, they might consider the recommendation from former Coalition Opposition Leader John Hewson that all new cabinet submissions, policies and budget measures should have to address social impacts through an inequality impact assessment.

The panel discussion was recorded ahead of the election at a policy forum in Canberra presented by the NHMRC Centre for Research Excellence in the Social Determinants of Health Equity (CRE-SDHE).

Its focus was on policy areas that powerfully influence the ‘social determinants of health’ and that are addressed in the CRE-SDHE program of work including Indigenous affairs, urban environments, social protection and health systems.

This article by ANU Research Fellow Phillip Baker is the first in a three part-series leading from the forum to be published at Croakey: it summarises the panel discussion and could be a valuable briefing document for the new (or not so new ) government and MPs who are wondering how health became such a huge issue in the campaign and why it is about so much more than a ‘scare campaign’.

On 12 May more than 120 people – including politicians, government officials, non-governmental organisations, media, researchers and the general public – came together at the Australian National University to share ideas about how political and policy processes can operate more effectively so as to tackle the widening gap in the health of Australia’s most and least disadvantaged people.

Prof. Fran Baum (Co-Director of the CRE-SDHE) kicked off the day with an overview of why tackling health inequities matters for all Australians – those on the lowest income will die six years earlier than those on the highest incomes; Indigenous Australians will die 11 years before their non-Indigenous counterparts. But those in the middle are also worse off than those at the top. Tackling health inequities (or in other words: achieving a fair distribution of health in Australia), is also about addressing the gradient of health across society.

The work of the CRE-SDHE builds on the World Health Organisation’s Commission on the Social Determinants of Health. Political challenges to tackling health inequities can occur throughout the policy process – how health equity gets onto the political agenda, how policies interact to affect health, how policy is implemented, and how policy is evaluated. The CRE-SDHE brings together a multidisciplinary team of researchers to understand how government policies can work more effectively to address the social determinants of health, so as to improve health and promote the fair distribution of health in society. Ultimately, the work of the CRE-SDHE will inform policy for a healthier and fairer Australia. Click here to read more about the aims, program of work and people involved in the CRE-SDHE.

The focus of this Panel was the question: ‘how fair is the Government’s 2016 budget?’

Richard Di Natale – climate change is one of the biggest challenges for health in the 21st Century. The budget completely neglects this, and misses the opportunity to achieve economic growth through renewable energy, a ‘win-win’ for health and the economy. The underlying assumption is that ‘trickle-down economics’ works for both economy and people, when clearly it does not. The large majority of tax cut benefits goes to the top 1 per cent of earners, whereas the bottom two thirds get nothing. Good evidence shows that inequality is now putting the brakes on economic growth.

Another key challenge is how to raise the profile of prevention? Most prevention programs have a long term gain but politics is not a long term game. Often vested interests (e.g. sugar lobby and nanny-state proponents) will oppose progress. We need to take up some of the former National Preventive Health Agency’s recommendations including restrictions on the availability, marketing and pricing of highly processed foods. A sugar-sweetened beverage tax could be hypothecated and reinvested to improve health. Ultimately we need to see health spending as an investment in healthier happier people as the outcome, not just as a cost. After all what is the point of economic growth if we can’t reinvest in health systems to enable people to live healthy lives?

Andrew Leigh – how much money you have impacts considerably on your health. Reflecting on his book Battlers and Billionaires, the richest socio-economic groups have seven more teeth each than the poorest in Australia. This at least partly reflects poor access to dental services. The distribution of smoking also hurts disadvantaged Australian’s hardest. Prevention works – interventions in tobacco, road safety and others have a clear return on investment, are evidence-based and effective. The 2016 Budget cuts taxes to big corporates but hurts working families financially. It also fails to invest in prevention measures and health promotion activities so as to reduce the economic burden on our health system. This is likely to exacerbate existing health inequalities.

Prof Sharon Friel – cuts to flexible funds and frontline services, for example to alcohol and other drugs services are likely to worsen health inequities in Australia. We should acknowledge evidence that austerity measures targeting public health programmes have led to increased HIV infection rates in some countries. Cuts in the Federal budget are on top of those at State/Territory level, for example extensive cuts to public health programs in Queensland. Health is much more than health care – we need to ensure people can live lives that they value. This requires that individuals and communities are connected to resources, are enabled through healthy environments, and have a voice in the policy decisions that affect them. Health is often framed as a matter of individual choice – but this neglects opportunities to address the wider determinants of health. There is a real opportunity to pursue economic, social and health goals together in policy.

John Hewson – affirmed that the 2016 budget would have negative inter-generational effects on health equity, including the low ates for the Newstart Allowance scheme supporting youth, and through complete neglect of climate change and investments in the renewable energy sector. The pension rate also remains below the poverty line. Prevention makes good economic sense and so it is frustrating to not see it budgeted for. We need routine consideration of the economic and social impacts of government actions. All new cabinet submissions, policies and budget measures should have to address social impacts through an inequality impact assessment.

Phillip Baker is Research Fellow at the School of Regulation and Global Governance (RegNet) at the Australian National University. 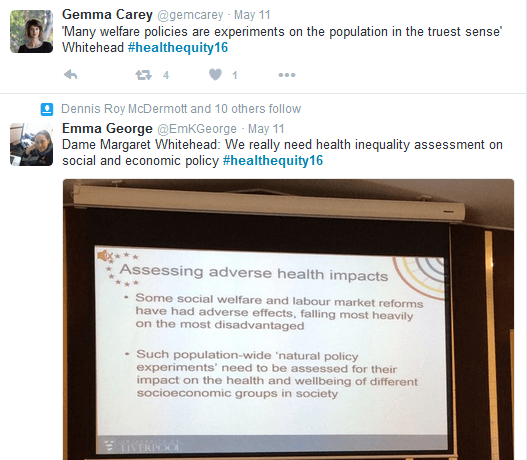 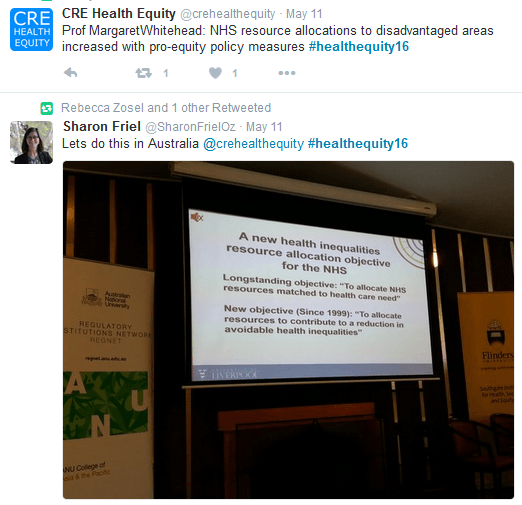 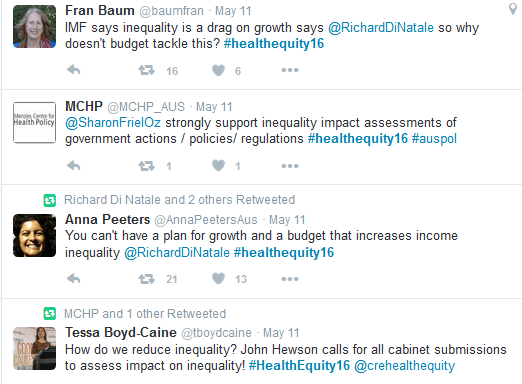 PrevPreviousEveryday Closing the Gap: “A person’s Aboriginality should not be more important than their individuality.”
NextYarning Together: a workshop on immunisation research for Aboriginal & Torres Strait Islander communitiesNext