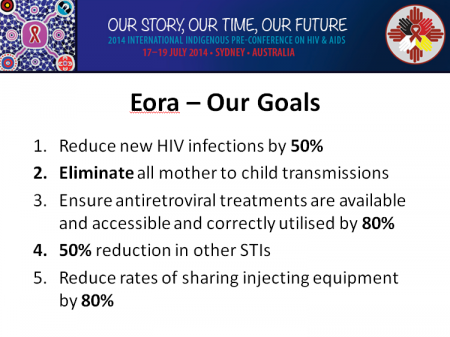 Australian organisers of an international Indigenous conference on HIV and AIDS have opened the Sydney event with the release of new data and concerns that Aboriginal and Torres Strait Islander communities are at risk of a “rapid escalation” of HIV and AIDS.

Conference co-convenor Associate Professor James Ward said Australia is at “a crossroads” in managing HIV and AIDS among the First Peoples of Australia, with concern it could follow the path of disproportionately high HIV rates among Canada’s First Peoples, who in 2013 made up 4 per cent of the total population but accounted for 23 per cent of HIV diagnoses.

However, he warned against an alarmist response, saying the focus should on the context of the figures, particularly around the failure to address high rates of STIs in many Aboriginal communities over decades, on increasing rates of injecting drug use in communities and reflecting on what is possible, such as through  primary health care programs like the eradication of donovanosis in remote northern Australia a decade ago.

Data and its context is an issue faced by many Indigenous researchers who are concerned that sensationalist media reports and unproven responses can create  distress for communities and increase stigma.

Ward is deputy program lead for Aboriginal Health at the Baker IDI in Alice Springs and co-convenor of the International Indigenous Pre-Conference on HIV & AIDS being staged in Sydney this week ahead of next week’s AIDS 2014, the 20th International AIDS Conference (IAC), in Melbourne

At the Pre-Conference, the Eora Action Plan (see slide above) will be launched to promote the adoption of more ambitious targets than laid out in this month’s 4th  National Aboriginal and Torres Strait Islander Blood-borne Viruses (BBVs) and Sexually Transmissible Infections (STIs) Strategy 2014–2017.

The action plan is shaped by the findings of a number of new reports and studies that have begun to build a better picture of HIV risks and responses, including the 2014 Annual Surveillance Report of HIV, viral hepatitis, and STIs by the University of New South Wales’ Kirby Institute (see slides below) and the Goanna report, the first Australian study of knowledge, risk practices and health service access for STIS and BBVs among young Aboriginal and Torres Strait Islander people (the final report of this study will be released at the Pre-Conference).

The 2014 Surveillance Report shows the prevalence of HIV in the Aboriginal and Torres Strait Islander community at 0.15 per cent  – similar to non-Indigenous Australians – but last year saw 26 new notifications of HIV, coming on top of 33 new notifications in the previous year, a record high. 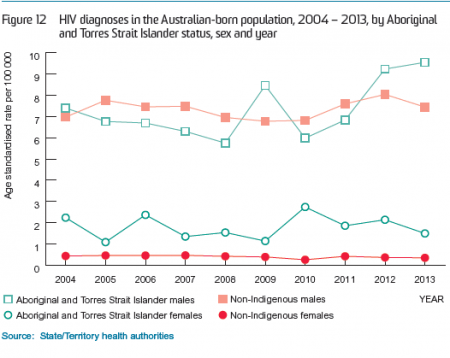 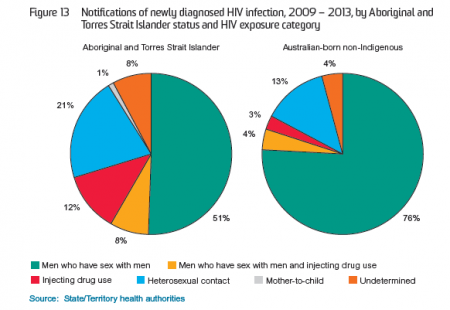 Ward said the biggest concern for Aboriginal and Torres Strait Islander communities and risk factors for HIV to escalate is that many communities have “unacceptably high” rates of other STIs – which can facilitate HIV transmission much easier.  He said a recent study found almost 40 per cent of 16-19 year olds with an STI such as Chlamydia, gonorrhoea or trichomonas, a rate found in no other population in Australia. 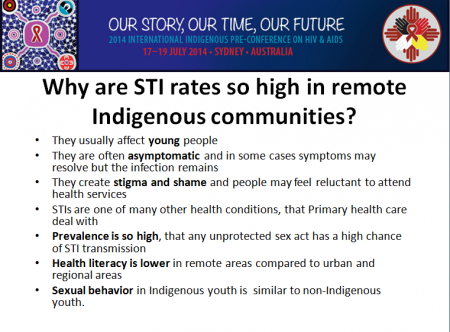 These high rates are not a question of different sexual behaviour among young Indigenous people.

“Young people are not having sex more often, not having more partners, not having sex at an earlier age, and not using condoms a great deal less than non-Indigenous people at the same ages,” he said. “It’s the very fact of them living in high prevalence settings that they are exposed to STIs. If they are going to have an unprotected sexual encounter at any point, they are very likely to end up with an STI.”

He said: “If HIV enters those communities, it would rapidly escalate because of the prevalence of these STIs.”

Ward also is concerned about the higher proportions of HIV infection among First Peoples of Australia attributed to injecting drug use – compared to non Indigenous people: 12 times higher in 2013 and 4 times higher over the last 5 years.

Ward said injecting drug use had driven the HIV epidemic among First Nations people in Canada, accounting for around 60 per cent of their HIV diagnoses.“All the signs are there that we could come down this same path as Canada. Now is the time to step up and address this area,” he said.

While there is a lack of data available on drug injection prevalence nationally among Indigenous  people, Ward said a combination of other data indicates it being “a largely underestimated and under-recognised problem within many communities and a significant risk for HIV to escalate.”

Studies show that Indigenous people made up 12 per cent of all clients in 2012 of needle syringe programs, hepatitis C rates among the population, (largely attributable to injecting drug use), continues to increase among Indigenous people while remaining  stable or even decreasing among non-Indigenous people. 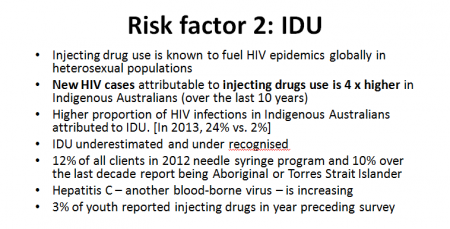 Ward said the over-representation in prison of Indigenous people, who are more than 14 times more likely to be imprisoned than non-Indigenous Australians, and the generally limited availability of strategies in Australian prisons to reduce HIV transmission also set up a major risk for HIV and AIDS escalation.

Currently Australian prisons have relatively low rates of HIV – with prevalence among prison entrants at less than 1 per cent, “but if they were to escalate, then it makes sense that  Aboriginal or Torres Strait Islander prisoners would be a population  significantly at risk.”

Ward said there is currently a lack of data about the level of treatment take-up amongst Indigenous people living with HIV. This poses a problem in terms of Treatment as Prevention (TasP) strategies, which aim to get people who are HIV infected onto antiretroviral treatments as that lessens their risk of transmitting the virus.

But he said some of the barriers to both access and adherence were likely to be shame and stigma in small communities, the costs of co-payments, and the lack of HIV specialist prescribers working in Aboriginal Medical Services.

The Eora Action Plan (named because it is meeting in the Eora nation, home of the Gadigal people of the Sydney basin) calls for responses over the next 5- 10 years that: 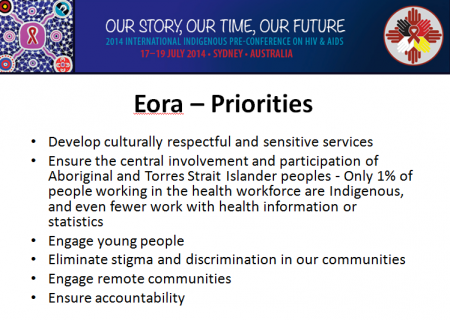 To support the plan, which will be monitored annually , the Pre-Conference will launch a national youth leadership group, ANTHYM, and an Aboriginal and Torres Strait Islander HIV Awareness Week which will occur each year around World AIDS Day (December 1).

“Over the last few years, numbers have increased and the differential between the Indigenous and non-Indigenous rate has increased. That’s how these epidemics start….slow, and then exponentially increase over a very short time. That’s the thing I really worry about now,” said Ward.

“These conferences and our actions over the next few years will be the first steps to a good news story in Indigenous health, to step up and halt the escalation of HIV.”

See also more details about the 2014 Surveillance Report on HIV and AIDS in Australia: http://kirby.unsw.edu.au/news/annual-hiv-surveillance-report-2014

•  Follow the discussions on Twitter at #IPCHIV14, and @ToddFernando will also be tweeting for @IndigenousX during the conference.

• You can follow Croakey’s coverage of the conference here.

PrevPreviousPutting Indigenous peoples on the HIV & AIDS global agenda: #IPCHIV14
Next“Bugger the planet” – health experts on the repeal of the carbon taxNext