The story of Aboriginal leader William Cooper – “the lone voice in Australia in 1938 condemning the cruel persecution of Jews in Germany” – should stand as inspiration for greater solidarity from “multicultural Australia” with Aboriginal and Torres Strait Islander people, says Race Discrimination Commissioner Dr Tim Soutphommasane.

With growing opposition to the planned repeal by the Federal Government of provisions of the Racial Discrimination Act, his address was both powerful and timely, and called for more focus on the damage of racism on our “civic health”.

Soutphommasane blamed growing reported incidents of racism and discrimination on a “deteriorating public debate” around asylum seekers that has a spill-over for all other cultural communities, including Aboriginal people, who experience significantly higher rates of racial abuse in everyday life than other Australians.

He outlined the need for action on three fronts:

His address followed an earlier conference session on Constitutional recognition, including moves to build a coalition of national health bodies in support (reported in more detail towards the bottom of this post).

Soutphommasane said the failure to build a better relationship between migrant communities and Aboriginal and Torres Strait Islander people in the past had been “one weakness in our multicultural experience”, driven in part by “a dimension of competitiveness in terms of resources or prominence”.

“Moral solidarity on matters of justice is important and we can find in our shared history some inspiration,” he said pointing to Cooper who, after reading about Kristallnacht in 1938, led a delegation of the Australian Aboriginal League to the German Consulate in Melbourne to protest persecution by the Nazi Government. In 2010 Cooper was honoured with his own memorial at the Yad Vashem Holocaust Museum in Jerusalem.

The value of that solidarity was acknowledged earlier at the conference by Warren Mundine, Chair of the Prime Minister’s Indigenous Advisory Council, who said he had been urged to take a public stand on the Federal Government’s proposed repeal of Section 18C of the Racial Discrimination Act by the Jewish Board of Deputies and Chinese community.

Noting that growing opposition to the repeal across cultural communities was now creating some “traction”, Mundine observed he did not think it would have come had it been just Indigenous groups fighting the repeal.

Soutphommasane said the Challenging Racism project at the University of New South Wales pointed to both significant experiences of everyday racism by Australians, and a “very startling disparity” in experiences of Aboriginal Australians.

The study showed about 20 per cent of Australians had experienced forms of racial hate talk, verbal abuse or racial slurs; 11 per cent experienced work or social exclusion; and more than five per cent had been physically assaulted because of their race.

The Scanlon Foundation on social cohesion, which has been looking annually since 2007, usually found that around 10-12 per cent of Australians experienced levels of racial or religious discrimination. Last year rose to nearly 19 per cent. One factor for that dramatic rise was, he believed, was the “deteriorating debate around asylum seekers”.

“The issue with that debate is not confined to those who are asylum seekers or refugees, because not every Australian can make the distinction between an asylum seeker or refugee, a skilled migrant, an international student, a second or third generation Australians, or indeed an Aboriginal Australian.”

With the changes to the Racial Discrimination Act being pursued in the name of “freedom of speech”, Soutphommasane pointed to the Australian Human Rights Commission survey of perceptions and experiences of racism and its impact on fundamental freedoms.

“It can make people feel not only that they are not able to speak up in a way they otherwise might, but inhibits their ability to go out or feel safe in public places,” he said.

“The harms of racism for an individual we know very well but I think the civic dimension is not always recognised. When someone is subject to racism, it can undermine their standing as a fellow member or citizen in our community and has a fundament impact on their freedom.”

Other key points from his speech

Soutphommasane said there’s a dangerous tendency in Australia to get “very defensive” when racism is called out and try to frame it as “a wholesale judgement on each and every Australian” or to try to focus only on full dictionary definitions of racism.

“It’s a nonsense to believe that calling out racism can be a bigger crime than racism itself.”

“Racial discrimination is as much about impact as intention. In focusing so much on intention we have lost sight of impact.”

He urges Australians to get on board the Racism: It stops with me campaign (at the very least report or record an incident, or offer support and comfort).

“The worst thing you can do is nothing,” he said noting psychological research showed people who harass or abuse others in public took lack of intervention as “endorsement or support”.

Soutphommasane explained in detail his concerns about the Federal Government’s intention to repeal provisions of the Racial Discrimination Act, and additional reports this week that it might “tinker” with other parts of the Act that “draw a clear and unambiguous line between genuine public debate and hate speech”.

He made the not often realised case that proposed changes to the Constitution go beyond recognising Aboriginal and Torres Strait Islanders as the first peoples of Australia, but also to “expunge” its ideas of racial superiority and ensure it guarantees against racial discrimination.

For reference, the recommendations by the panel on Constitutional Recognition of Aboriginal and Torres Strait Islander Peoples are:

The Health Systems Coalition project being led by Kim O’Donnell from the Department of Health Care Management at Flinders University is working to bring together national health organisations to develop a statement of support of Constitutional recognition and engage and education on the value of recognition from a health perspective.

See the statement by the Royal Australian and New Zealand College of Psychiatrists.

A number of participants in the session talked about not having been around to witness the  historic 1967 Referendum.

It was quite a moment then when Aboriginal Elder Lowitja O’Donoghue stood to declare: “I was here in ’67.”

She said the lessons of that time were: “We were a united group, black and white together”.

See below for more reflections from tweeps at the conference and why O’Donoghue always stays at the Brassey Hotel when she is in Canberra. 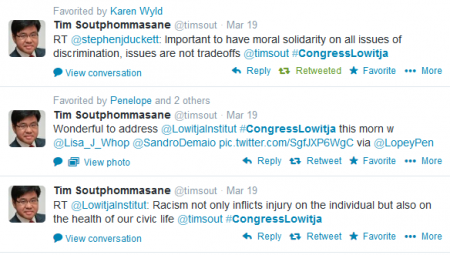 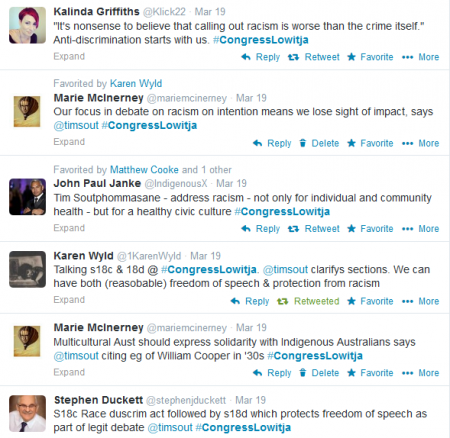 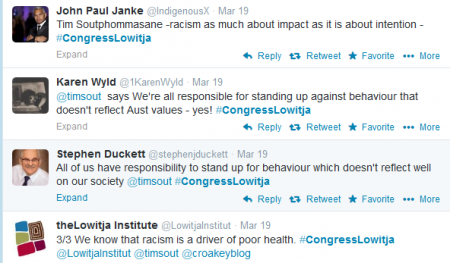 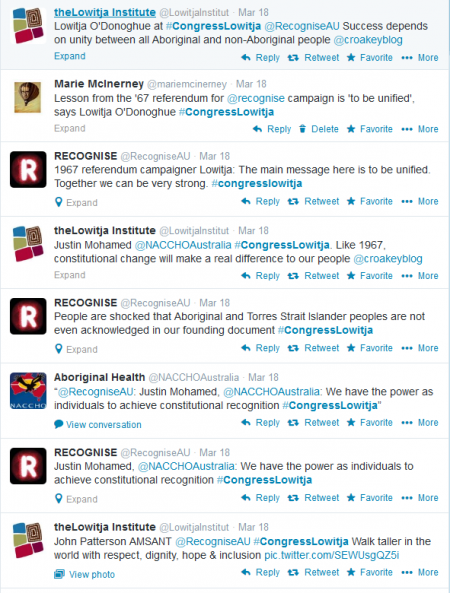 * You can track Croakey’s coverage of Congress Lowitja here.