A call to arms for #HandsOffOurABC

Introduction by Croakey: The Federal Government’s $84 million cut to the ABC over three years comes on top of cumulative cuts of $254 million since 2014, and threatens the organisation’s “survival as an effective public broadcaster”, according to Ranald Macdonald, a former senior Fairfax executive, and a Friend of the ABC.

Writing for John Menadue’s Pearls and Irritations site, Macdonald cited a recent article by the European Commissioner for Human Rights, Nils Muižnieks, stating that a “well-funded and strong public service media are a good indicator that a democracy is healthy”.

“Public service broadcasting is not only about providing information, education, culture and entertainment, it is also an essential factor of pluralistic communication, one of the main characteristics of a democratic society,” Muižnieks wrote.

These comments also underscore a key message of Croakey’s new campaign that is seeking to promote wider understanding of the importance of public interest journalism as a determinant of health.

Meanwhile, the Media Entertainment and Arts Alliance, has warned that the timing of the ABC cuts “could not be worse”, and said: “with a federal election on the horizon, it is critical that the ABC be able to continue to scrutinise policies and platforms effectively.”

In the article below, Daniel James, a Yorta Yorta man, writes that a healthy ABC is also vital for telling important health stories that otherwise may not be covered, especially those from rural, remote and regional communities.

The article, The ABC won’t survive another Coalition Government, was first published on his blog and is re-posted here with permission.

In recent years the ABC has come under constant attack by ideologues, almost exclusively on the right, that accuse it of being left leaning and biased towards the progressive side of politics.

Pauline Hanson would like to see the ABC privatised and has long wanted the salaries of high profile ABC presenters publicised as a matter of public record. Peter Dutton has declared the broadcaster dead to him, and a multitude of right-wing pundits, usually in poorly lit Sky News studios, have been hell bent for the ABC’s destruction while quietly longing for its audience share.

When asked if he wanted an apology from the ABC after being labelled the “the most destructive politician of his generation” by ABC Political Editor Andrew Probyn, Abbott responded: “now I’m not asking for an apology … because I’m not that kind of a person, but given the chronic bias in the ABC, given the incorrigible left-liberal cultural position the ABC adopts, you’d think if they wanted to encourage people to have a bit of faith in them, the very least they would do when such a finding has been made against them in respect of a conservative politician, is apologise.”

This ongoing criticism comes despite 80 per cent of ABC television news and current affairs audience’s belief that coverage is fair and balanced.

The end result of the incessant attacks is a Government that has been given the green light to diminish an already diminished broadcaster. To continue its ideological war on the national broadcaster, which has become one of the main fronts in the mind-numbing culture wars as evidenced by an additional salvo, will see $48.7 million of the savings made from the ‘indexation freeze’ redirected to a series of commemorations and monuments to celebrate the 250th anniversary of Captain Cook’s voyage to Australia!

The real losers in all this?

Us. None lose more than those in rural and remote communities. A quick look at the distribution of ABC local radio stations shows unparalleled reach in to regional and remote settings.

The ABC plays a pivotal role as a provider of independent journalism. Journalism that provides a voice for issues affecting these communities. For nearly 85 years, the ABC has played an important role in informing and educating generations of Australians.

It has become intertwined into the fabric of Australian culture.

It provides multi-platform content that caters for the needs of the community and in remote settings, can be the only window to national and international current affairs reporting.

Those of you who are familiar with my ramblings might expect me to write about the importance of the ongoing coverage of issues such as Closing the Gap, high incarceration rates of Aboriginal people, the abuse of children in youth detention and the epidemic rates of the HTLV-1 virus affecting remote Aboriginal communities. And you would be right.

The ongoing reporting of these vital issues is best done with journalism that is free from political and commercial influence.

At the moment there is an unfolding crisis as the HTLV-1 virus ravages remote Aboriginal communities, which is best reported free of prejudice. The exploration of the social determinants of health, the vast over representation of Aboriginal people in prisons, overcrowded housing and the link to hearing loss for children. These are issues that market-driven media outlets will never explore in depth. Come to think of it, market forces haven’t been a friend of Aboriginal communities, hopefully that’s changing.

The ABC provides a strong and authentic voice to issues that commercial mainstream media outlets would not go near.  Public discussion cannot be left to the Sunrises of the world to call for a new stolen generation. We can’t leave it to shock jocks to bemoan and be befuddled  by terms like cultural safety.

We need a strong and present national broadcaster that can expose the unpleasant truths about ourselves, the ABC is the mirror and the frame in which we can honestly look at our own society and sometimes it’s not a pretty sight.

In the world of ‘fake news’ we need institutions that we trust to be as strong and vibrant as ever.

The ABC, through independent journalism, tells us what we need to hear, not what we want to hear.

One of the great juxtapositions in the public debate around the ABC is its inability to defend itself. ABC journalists can’t opine on the cuts, all they can do is ask question; the Managing Director, Michelle Guthrie can advocate but largely behind closed doors.

So it’s up to us, the people that value the institution and independent journalism. Join ABC Friends and engage in Croakey’s public interest journalism campaign #PIJ. The time is right.

Read Jenna Price in the SMH: Why the government should spend $50 million on ABC rather than Capt Cook. 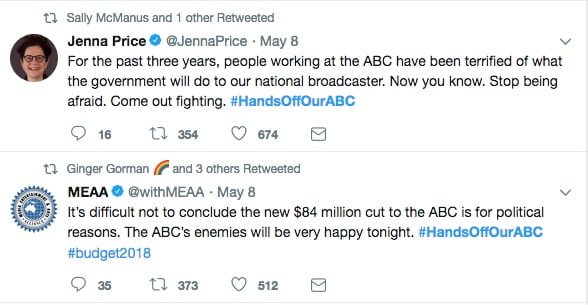 PrevPreviousMay the #Nurseforce be with you: future of primary health care nursing on the agenda
Next#ThanksMichaelMoore – and some insights into public health leadershipNext