Anyone for cricket? Or, given the avalanche of alcohol advertising hitting our World Cup screens, perhaps it’s more appropriate to ask, anyone want to get legless?

According to Danica Keric, Julia Stafford & Mike Daube from the McCusker Centre for Action on Alcohol and Youth at Curtin University in Perth, it’s also appropriate to ask: why on earth would anyone want to increase young peoples’ exposure to alcohol advertising on TV?

Anyone watching the Cricket World Cup has seen the Australian team promoting beer for hour after hour, along with regular advertisements for all manner of alcohol products and sales outlets.

Advertising through sponsorship of sport is a favoured and minimally restricted form of promotion for alcohol companies, with high exposure to children and young people.

It is well established that exposure to alcohol advertising influences young people’s beliefs and attitudes about drinking, and increases the likelihood that adolescents will start to use alcohol or will drink more if they are already using alcohol.

We also know that alcohol sponsorship increases drinking and risky drinking among those sponsored.

So we were disappointed to see the commercial television industry body Free TV Australia propose changes to its Code of Practice which would increase young people’s exposure to alcohol advertising.

These include alcohol ads being advertised from 7.30pm, an hour earlier than the current Code permits, and retaining the loophole that allows alcohol ads during sports broadcasts. Following its “public consultation”, Free TV Australia will lodge the proposed Code with the Australian Communications and Media Authority (ACMA), who hold the power to accept (or reject) it.

The McCusker Centre for Action on Alcohol and Youth is responding to the Free TV proposal both to ACMA and Free TV, and urging other health and community groups to do the same so that these proposals are not accepted and that instead there are moves to stronger, not weaker regulation.

Free TV claims that “Ratings data shows that children constitute a very small percentage of the audience for sporting events.”

Alcohol companies engage in an enormous range of sponsorship activities in Australian sport – from local teams through to major national codes.

As reported in Fairfax media, we have compiled a list of “Official” alcohol sponsors of sport – which we have designated “The Official Drinks Cabinet of Australian Sport”.

This list includes the brands designated as the ‘Official’ alcohol products for a sport, sporting team or event. It includes only those beer, wine, spirits or cider sponsors specifically designated as having an “Official” role, and does not include sponsors with other labels such as ‘gold’, ‘silver’ or ‘major’ partner, ‘official supplier’ or ‘official sponsor’.

As children form a substantial part of the viewing audience of sport, it is baffling that sports not only endorse alcohol products, but also promote them as the “Official” drinks of a team, sport or an event.

Alcohol contributes to around 30% of road crash deaths:  it is almost beyond belief that alcohol brands  seek  ‘Official’ associations with motor sports, and that motor sport organisations  consider it appropriate to have an ‘Official Spirit of V8 Supercars’ or an ‘Official Wine Partner’ of the  Formula 1 Australian Grand Prix.

Australia is not alone; there are many high-profile international  ‘Official’ alcohol sponsors of major sporting events.

The Australian public – and children – could reasonably assume that by designating the products as ‘Official’, sporting authorities are endorsing the products and recommending them for sports participants and the broader community. Their ‘Official’ product status also suggests that leading sportspeople are regular consumers of these products.

Elite athletes should be champions for health but their sports seem more interested in championing alcohol interests.

A Sydney Morning Herald infographic elegantly illustrates the extent of ‘Official’ alcohol associations with Australian sport, as well as some prominent international examples.

Given the risks associated with alcohol use among young people and the appeal of sport to children, we recommend that sporting organisations remove alcohol from their Official Drinks Cabinet.

We also urge the Government and all regulatory authorities to ensure that impressionable young people are not constantly exposed to irresponsible alcohol promotion – and that the rules protect children, not alcohol companies.

The Official Drinks Cabinet of Australian Sport can be found here.

•Danica Keric, Julia Stafford & Mike Daube are from the McCusker Centre for Action on Alcohol and Youth, Curtin University, Perth.

Meanwhile, it’s perhaps not surprising that at the Cricket World Cup 2015 website, free coolers are on offer for those buying merchandise… 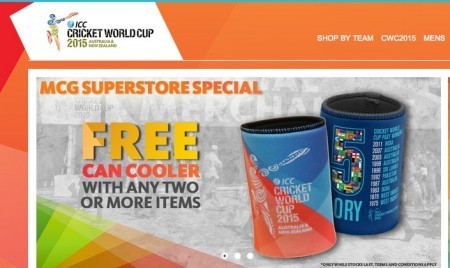 PrevPrevious#NSW Votes lacks a vision for dealing with poverty and disadvantage
NextCalling innovators and entrepreneurs: Startup Weekend for Health in BrisbaneNext