Social media and particularly Twitter had a huge impact in amplifying the discussions and reach of the NACCHO Summit in Adelaide this week.

As you can see from the tweet below, NACCHO is heading to next Tuesday’s National Press Club debate on health with an arsenal of tweeters. (Heaven help hope those politicians if they don’t focus on their plans for Aboriginal and Torres Strait Islander health – their names will be mud in the Twitterverse.)

In the article below journalist John Thompson-Mills reports on the social media impact factor – perhaps it was no coincidence that #NACCHOSummit was trending on Twitter and that a senior government official turned up for the last day of the Summit.

At the bottom of his article are some further conference tweets, showing that “pride” emerged very strongly as a Summit theme, as well as a grab of the conference’s Twitter analytics (which doesn’t include today’s tweet-coverage).

One of the foundation stones of NACCHO and Aboriginal self-determination is community control. The community provides the expertise, drives the program and controls the message.

This makes social media a perfect fit for an event like the inaugural NACCHO summit.

Experienced social media users may have been fully prepared to use Twitter to talk about the #NACCHOSummit but many, including senior NACCHO people, were taken aback by what social media managed to achieve this week.

“I think the social media coverage has been absolutely fantastic and taken the conference to places it probably wouldn’t have been able to reach, just with newspapers and radio. So I think it’s a very important and effective tool.

“The viralness (sic) of Twitter certainly surprised me, absolutely, and I think it’s the attraction and the interest. Finding peoples’ interests and them tweeting back; ‘that’s really good, can I hear more about those stories?’, and then getting in touch with others who are presenting them. I think I know more people on social media than I do face to face.”

The summit convinced a number of NACCHO staff to join the Twitterverse and, with thousands of tweets generated by the end of the conference, there was plenty to inspire the “Twitter-virgins”.

NACCHO Summit attendee Jake Byrne isn’t a Twitter virgin. He tends to observe the space rather than join in the debate. Not now though. He says:

“I’m probably going to have to get an account that’s a bit more focused and work specific. I have to try and get a bit more active in the space, promoting different programs and ideas and things that I’ve been seeing.

“I reckon the more we spread the word, the better it is for everyone in promoting those really good stories that all too often in Aboriginal communities and Aboriginal health are the ones that don’t get the spotlight shone on them.”

Lisa Briggs expected social media at the NACCHO Summit to stay within the realms it already occupied, but in the middle of an election campaign there was too much going on for it to stay contained.

A couple of times this week, the conference’s Twitter hashtag (#NACCHOSummit) was “trending” nationally (ie: the top subjects on the Twitter platform), which, along with the sheer numbers of tweets, helped convince a government bureaucrat to make a hasty trip to Adelaide from Canberra to see what was going on.

Samantha Palmer is the First Assistant Secretary, in the Office for Aboriginal & Torres Strait Islander Health and she sat in on the final day of the conference.

With the election campaign in full swing, and the Federal Government in caretaker mode, Palmer wasn’t able to speak publicly, but did spend private time with NACCHO members.

“I was impressed to see all the Tweets coming from the summit did put some pressure on the pollies and brought it to national attention, and we were “trending”. I actually got to understand what trending was and the power it has, which I wasn’t really aware of before coming here,” he said.

NACCHO CEO Lisa Briggs didn’t mind that Samantha Palmer couldn’t talk publicly at the summit. For her the coincidental timing of the election campaign and the conference was perfect.

“I think it’s been a fantastic opportunity to get the good stories and inform wider Australia what’s going on,” she said. “Through social media we’ve kept it on a political platform, asking questions about how they’re contributing to Aboriginal Community Control and health in particular.

“Today you would’ve seen more tweets directed at Tanya Plibersek (Federal Health Minister) and Peter Dutton (Shadow Health Minister). They may not be here physically but there are other ways of getting to them,” she said.

At the other end of the political scale, NACCHO conference attendee, Marlee Ramp, a 19 year-old medical student from Cairns, has now seen the potential of Twitter up close.

“…this week with all the hash tags, I started an account and followed the feed,” she said. “Obviously this week is all health focused, but it gives me a broader perspective of health and what my role may be in the future, and who I can get involved with.”

Young, active, aware people like Marlee Ramp represent the future for Aboriginal self-determination but so it seems does social media because it empowers the storytellers.

Jake Byrne is 30 and he can see the relative power social media gives him and other Aboriginal people. He says:

“If we can control our message, that’s brilliant. We’ve heard a lot in the past few days about myths that were being smashed through the evidence that’s been collected so far, but I think those myths are propagated by other people sending messages about our community. If we can get our stories out there the way we want them to be told, that’s really empowering.”

The next NACCHO Summit is scheduled for April or May next year. That means organisers and delegates will be filling social media just as budgets are being finalised by what’s anticipated to be a new Coalition Government.

No doubt we’ll get a clear idea by what’s said on social media.

Twitter stream shows up a strong theme of Pride 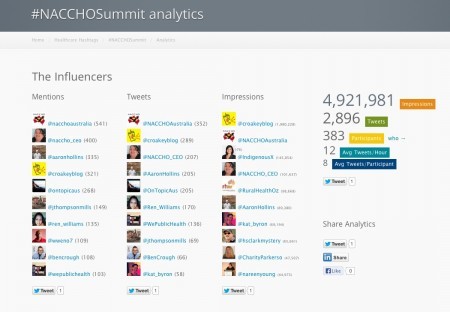 Previous Croakey posts from the Summit

• Addressing lateral violence in the workplace

• Call for action on alcohol, drugs, STIs and HIV prevention

• Stickin’ It Up the Smokes

• Getting active at Warburton and healthy catering guidelines

• Making Telehealth part of the future

• Improving the lives of disabled people in remote communities: case study from Warburton