A challenge to Australia: make sure every child has access to affordable healthy food

Here’s a challenge to Australian politicians, leading food retailers like Woolworths and Coles and perhaps consumers: make sure that every child in the country has access to affordable fruit and vegetables by 2017, “whatever their postcode”.

It was laid down last week by global health campaigner Alessandro Demaio who says Australia can’t address health inequity, nor its obesity emergency, when rural and remote communities have to pay $9 for six mushrooms or $4.50 for a small piece of broccoli.

Speaking at Congress Lowitja 2014: Many mobs, one vision: creating a healthy future, he urged Aboriginal and mainstream health services to “draw a line in the sand” and give both sides of politics till the end of this term of government to ensure:

“No matter where a child lives, in the centre of Sydney or the ‘red centre’, fresh produce will cost the same and be affordable.”

Poor diet, he said, was the biggest risk factor of disease worldwide and one that could “not be more evident” in rural and regional Australia.

Addressing poor diet should not be about “blame or the lack of sound personal choices” but a much more complex political and economic understanding.

“In short, when it comes to food and food production, we have a broken system,” he said. 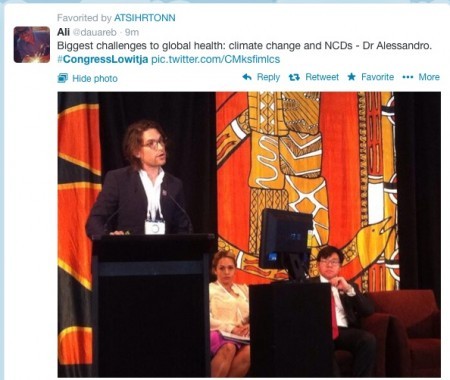 But how to make prices or access to affordable healthy food equitable?

Should the Federal Government subsidise prices?

Should major retailers be required/enticed to play a role?

If so, would those of us who live in cities happily pay more at the checkout if it meant ensuring highly disadvantaged remote Aboriginal communities might be able to afford what we take for granted?

And would that all work?

One current study led by the Menzies School of Health may point the way.

The Stores Healthy Options Project in Remote Indigenous Communities (SHOP@RIC) will test the impact on consumption of fruit and vegetables, diet drinks and water in 20 remote Northern Territory communities of a 20 per cent price discount alone, and then with an in-store education program.

“There is growing evidence that taxes and discounts on food and beverages could influence consumption patterns considerably, and thus improve health outcomes. Improved affordability has been associated with significant increases in the purchase and consumption of healthier foods.”

Demaio, a postdoctoral fellow in global health and non-communicable diseases at Harvard Medical School, recently made the case for action, noting several studies in Australia have highlighted the disparity in the cost of healthy food between urban and rural areas in South Australia, Queensland and the Northern Territory.

He told the Lowitja conference prices for healthy foods in remote areas can be more than 50 per cent higher than the cheapest available in metropolitan stores.

His co-author Kerin O’Dea, Professor of Nutrition and Public Health in the Health Sciences Division of the University of South Australia, was part of a study of food purchased in three remote Northern Territory communities over a 12-month period, which looked at food expenditure, estimated per capita intake, nutrient profile and density relative to daily requirements, and major nutrient sources. As the article noted:

The study found that one-quarter of total food expenditure was spent on non-alcoholic beverages, with 15.6 per cent spent on sugar-sweetened soft drinks. As little as 2.2 per cent of money spent went on fruit, and only 5.4 per cent on vegetables. Sugars contributed between 25.7 per cent and 34.3 per cent of energy, of which 71 per cent was refined sugar and sugar-sweetened drinks.

Further, white bread was a major source of energy and most nutrients in all three communities.

O’Dea says there have been a number of international responses to similar issues, including a promising New Zealand trial. In Canada, a new food subsidy program called Nutrition North replaced a long-established Food Mail program. According to this report, the old program subsidised shipments of most foods and some hygiene products, while Nutrition North only covers healthy foods.

A United States supplemental program for women, infants and children (known as WIC) provides vouchers for disadvantaged households to buy specific foods (including low fat milk and wholegrain bread and rice) and US insurance companies offer rewards for healthy eating.

O’Dea says the difficulty in finding ways to meet the challenge in Australia on health and equity grounds is the lack of local evidence to prove the case. There’s no questioning the higher cost of food, as the Australian Preventative Task Force said:

What’s still not known is the most effective way to change that. That should emerge, she says, from the SHOP@RIC trial, of which she is part. “Until we get data like that locally it’s very hard for us to make an argument.”

However, she notes even the 20 per cent discount being trialled will still not come close to providing city prices for remote and, generally, significantly poorer households.

“For low income people we need more than parity,” she said.

Finally, as a city-based journalist fired up from the conference, I’m obliged to point here to a previous Croakey post which makes the important point that “one sized fits all” solutions can look appealing but cause all sorts of new problems (perhaps not least that the study will be perhaps be easier to undertake because community stores now operate under a licensing regime implemented under the Northern Territory Intervention.)

Demaio, who is Melbourne born and raised, may be well known to Croakey readers and Twitter uses after his stint on @WePublicHealth last year.

Last year he co-founded NCDFREE, a global social movement against non-communicable diseases, which raised $US60,000 through crowd-funding and made three short advocacy films, one in collaboration with the World Health Organisation.

He told the conference climate change and non-communicable diseases were the biggest threats to global health – they also shared the same causative and mitigating factors, he said.

Demaio said young people are “our secret weapon in global and local health: globally connected like never before, native to technologies…driven and desperate for change…and combine traditional knowledge of health and medicine with a deep sense of social justice and appreciation of the social determinants.”

• You can track the Congress Lowitja coverage here.

PrevPreviousWhy aren’t governments tougher on private health insurers?
Next“If we built housing to suit the community’s needs, we might end up with more children at school and more people in work”Next