Kerrie Noonan and Peta Murray, from The GroundSwell Project, write:

Recently we wrote about social media resources in palliative care and how The GroundSwell Project uses social media to share our projects, connect with collaborators and promote community engagement in end-of-life related topics.

In our experience, social media is a great tool. However our latest school project on organ donation has taught us it can’t replace real life experience.

Our drama project is in its second year, and, informed by a public health approach to death, dying, and bereavement (see Allan Kellehear’s book Compassionate cities), it epitomises GroundSwell’s belief that young people –  when given the opportunity – can and will contribute significantly to community conversations about big ‘life and death’ topics such as transplant and organ donation issues (last year the topic was Motor Neurone Disease).

These young people are, after all our future carers, healthcare providers and policy makers! Why wait until children are ‘older’ to talk about death when it’s part of our everyday lives?

So for two months, GroundSwell facilitated an arts-focused encounter between Nic Bonfield’s Year 11 class of 19 students at Penrith High School and another eight people who have faced organ donation in the most intimate ways possible, as donor recipients, donor families, and health professionals. 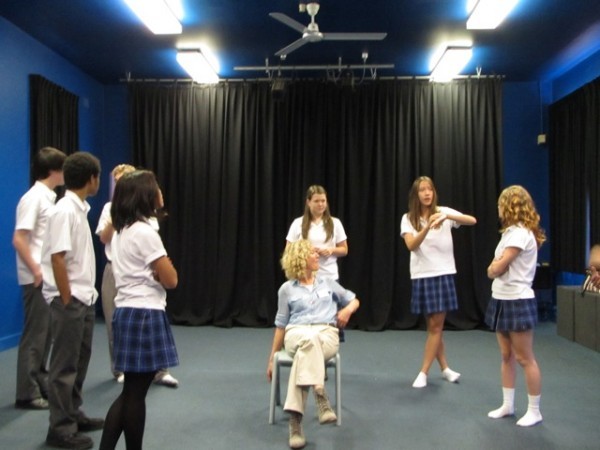 Readers may be aware that rates of organ donation have increased 51% in 2010 to 309 donors due in part to the national DonateLife community awareness campaign. Even so, according to DonateLife, 40% of people in Australia still don’t know of their family’s organ donation wishes and only 58% of families consent to donation. With 1700 people on a waiting list for an organ, it would appear there is still a way to go before Australia has rates of donation seen in other countries in the world.

Curiously, despite this social-media driven campaign, it’s young people who have the lowest levels of awareness and knowledge about organ and tissue donation. According to DonateLife, just 55 per cent of 18-29 year olds believe that their donation wishes are known by family members, compared with 71 per cent of those aged 30 and above.

Clearly, young people are particularly at risk of not having their wishes to be a donor fulfilled by family members. They may well have made the personal decision, but they are yet to have the conversations that would allow their family to consent, should the moment arise.

These tricky discussions are a point of interest here at GroundSwell, so when we started an Organ Donation-themed project with Year Eleven Drama at Penrith High School this year, we were interested to see if this kind of practical engagement would propel the young people to ‘talk the talk’.

Participating in this kind of project is a deeply intimate and intense embodied learning experience for these students, who must ultimately take their discoveries onto the stage as performers. They researched their ‘topic’ by connecting with real people and their experiences of organ donation.

Throughout the process personal stories of organ donation were enacted, myths were busted, and there were often long discussions between the students themselves about how to “empower” the audience to make-up “their own minds” about organ donation without being “preached at”.

The resulting performance From The Heart grappled, through scenes, imagery and song, with the paradoxes and complexities of the issue.

“Someone once said that artists have the ability to give people something they didn’t know they were missing. I never felt I had the need for this sort of project before I did it, but in hindsight, I can’t imagine not having done it. I feel more informed about an important issue, a lot closer to the people in my drama class and now have made a decision that, one day, will hopefully help a lot of people in need”

So what did we learn?

First, these school-based projects demonstrate the benefits of using the existing creative arts curriculum as a doorway to meaningful engagement with young people on difficult or taboo topics related to loss, death and grief.

Second, we also observed the possibilities of facilitating the exchange of “held” knowledge between experienced community members and young people, without expecting the classroom teacher to learn a new set of skills or become experts about a particular health topic. On the strength of these experiences, we are also inclined to the view that public health programs for young people may benefit from resisting the urge to introduce ever more content into the education system and would do well to explore instead the rich inter-disciplinary possibilities that already exist within the creative arts curriculum.

And finally, these 19 students talked to their families and their friends, and reported that they felt considerably more equipped to have these difficult in-real-life discussions. At the end of the performance project every student said they had had a conversation with their parents. During the project, it seems they did indeed talk-the-talk off-line, with the majority also using social media to research, discuss and share about organ donation.

This sharing is undoubtedly one of the strengths of social media. Can it replace the interpersonal experiences that happen off-line and face-to-face? Perhaps in the future it may. In regard to community engagement around issues such as organ donation social media certainly has a role to play.

However, in our experience, it is the interplay of the off-line with the on-line space that makes the learning most meaningful.

PrevPreviousShould the public purse fund a procedure that “the best available evidence does not support”?
NextIs this “cappuccino-style” health reform? Marking an anniversary…Next