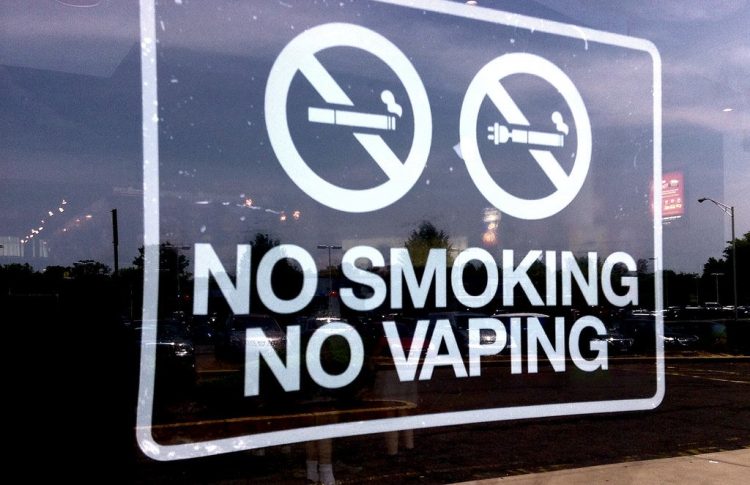 A damning review of e-cigarettes shows vaping leads to smoking, the opposite of what supporters claim

Introduction by Croakey: A 360-page systematic review of the global evidence on the health impacts of e-cigarettes, funded by the Australian Department of Health and conducted by Professor Emily Banks and colleagues from the National Centre for Epidemiology and Population Health, was recently released.

It says that “current evidence supports national and international efforts to avoid e-cigarette use in the general population, particularly in non-smokers and youth”, and that there “is limited evidence of efficacy of freebase nicotine e-cigarettes as an aid to smoking cessation in the clinical setting”.

Below, tobacco control experts Paul Grogan and Professor Guy Marks discuss the findings, in an article first published at The Conversation.

A major review on the health effects of e-cigarettes reflects what public health advocates have feared – escalating use of e-cigarettes in school-aged children, early warning signs of increased smoking rates in young Australians, and direct health harms of vaping in all ages.

The review, which was released on 7 April, was commissioned by the Federal Health Department and conducted by researchers at the Australian National University.

Overall, it found the health risks from e-cigarettes significantly outweighed any potential benefits.

The review should silence lobbyists, who have long used data selectively to promote the sale of e-cigarettes. This is despite the fact previous reports, none as comprehensive and rigorous as this latest review, have delivered similar findings.

What does the review tell us?

The review looked at the evidence behind the health impacts of e-cigarettes or “vapes” – a diverse group of devices that aerosolise a liquid for inhalation. These are touted as a safer alternative to cigarettes and an aid to quit smoking.

The review found conclusive clinical evidence e-cigarettes cause acute (short-term) lung injury, poisoning, burns, seizures, and their use leads to addiction. They also cause less serious harms, such as throat irritation and nausea.

Read more: Vaping-related lung disease now has a name – and a likely cause. 5 things you need to know about EVALI

Among evidence ranked as strong, the review confirms what has worried tobacco control experts since patterns of e-cigarette use first emerged.

This is a dream for tobacco companies and their retail allies.

Weighing up the harms and the benefits

The review found limited evidence e-cigarettes assist individuals to stop smoking. But this is no stronger than evidence showing e-cigarette use might also cause former smokers to relapse and revert to tobacco.

There is no conclusive or strong evidence in the review for any beneficial outcome from e-cigarettes.

E-cigarettes might help some individuals stop smoking. So they should only be available via a prescription from authorised medical professionals trained in helping people to quit. Any access beyond this risks serious harm for no benefit.

Of e-cigarette users who identify as smokers, the second largest user group is 14 to 17-year-olds. Dual use is starting young, from the limited Australian Institute of Health and Welfare data we have.

The Australian Institute of Health and Welfare data precedes increasingly visible use of e-cigarettes in Australian schools, reported in the media.

The review also shows young males are the leading e-cigarette user group by age and sex. Australian males aged 18-24 are also the only age group which, on the latest Australian Institute of Health and Welfare data, are smoking at greater rates than they were three years earlier.

Whatever benefits might be delivered by e-cigarettes, such as helping people to quit smoking, would, according to the review, be modest compared with the harms they are likely to cause.

Unfortunately, public policy on the regulation of e-cigarettes is at risk of influence from powerful commercial interests. In the interests of public health, these forces must be resisted.

What should governments do?

Federal, state and territory governments have enacted policies aimed at providing e-cigarette access to individuals who might benefit from them to quit smoking, while protecting everyone else.

But the evidence on how widely e-cigarettes are used shows these policies need to be more tightly enforced.

It’s still easy to buy e-cigarettes online, they are available without prescription from petrol stations, tobacconists, specialty “vape” stores and are on-sold by entrepreneurs – all of them acting unlawfully. Heavy fines will end their cash incentive.

The review shows the risks to public health posed by e-cigarettes will only grow unless governments enforce their laws.

This is to protect young Australians from becoming the first generation since trend data was collected to smoke and use nicotine at higher rates than their predecessors.

Read more: Twelve myths about e-cigarettes that failed to impress the TGA

Guy Marks is a respiratory physician, a respiratory and environmental epidemiologist and Professor of Respiratory Medicine, South Western Sydney Clinical School, UNSW Sydney. He is President and (interim) Executive Director of the International Union Against Tuberculosis and Lung Disease. This organisation implements a tobacco control program, mainly in low-middle income countries, with funding received from Bloomberg Philanthropies, via Vital Strategies.

PrevPreviousSubstandard rentals: are Australian families living the dream?
NextShining a light on aged care reform, the challenges and solutionsNext