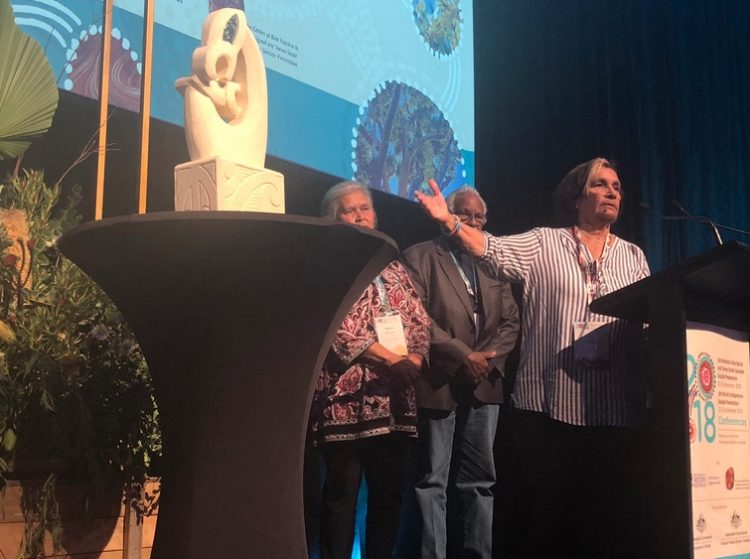 In a moving prayer ceremony at the close of the national event on Wednesday, Maori delegates presented a gift to the conference from the first World Indigenous Suicide Prevention Conference held in 2016 in Aotearoa New Zealand.

The Manaia, a guardian spirit, will in turn be passed on to Canada for when it hosts the next event in 2020.

The gift was accepted by representatives of the Nyoongar people, the Traditional Owners of the Perth area, and the ceremony can be viewed here. 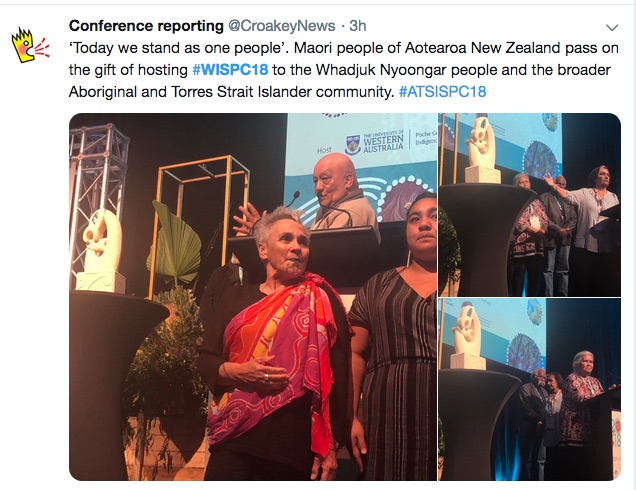 Conference patron, Professor Tom Calma AO, says organisers have been overwhelmed by interest from across Australia, and from First Nations people in other countries, particularly New Zealand, Canada, and the United States.

It will build on the work of the inaugural conference and on the powerful Turamarama Declaration from that conference that aims to foster community led and based solutions in suicide prevention and global recognition of the disproportionate rate of Indigenous peoples’ suicide as a worldwide phenomenon.

The Turamarama Declaration is a powerful and cultural call to arms on Indigenous suicide.

Its opening lines declare that its signatories weep with the pain of suicide in Indigenous communities and speak to the need for “healing our own wounds and the wounds of our lineage”.

The Declaration was overwhelmingly adopted by delegates at the first World Indigenous Suicide Prevention Conference held in Aotearoa New Zealand in 2016.

Originally drafted by eminent Maori researcher and health specialist, Emeritus Professor Sir Mason Durie, it is far from the dry declarations that so many conferences deliver to mark their work.

Durie wrote last year that the conference wanted it to be as accessible as possible, particularly for young Indigenous people, so its language purposely avoided technical, clinical and sociological terminology.

“Instead, it was couched in terms that were essentially humanistic, respectful and comprehensible”, he said.

The first three of its 14 compelling articles recognise the anguish and perplexity that frequently accompany suicide, the need to heal, and the strengths inherent in Indigenous people, community and culture.

And it puts the challenge for action to Indigenous leaders and tribal authorities, and on then national and local authorities, politicians, and global agencies like the UN.

Naera told Croakey the conference was held “at the request of our Elders”, because of the disproportionate number of Maori dying by suicide and to build on the cultural and political  insights and momentum that were emerging from the first New Zealand Maori suicide prevention conference.

Since then, said Naera, a movement has been created particularly among First Nations people in New Zealand, Australia, Canada and the US, with “huge buy-in” from Indigenous communities and community organisations around the globe, and among many non-Indigenous organisations.

Naera is part of a Global Indigenous Network Advisor Group, chaired by Sir Mason Durie, which aims to give effect to the Declaration.

Naera hopes the subsequent launch of the World Federation of Public Health Associations (WFPHA) first Indigenous Working Group will prompt global recognition by public health organisations of the Declaration, as a key step towards United Nations recognition of Indigenous suicide as a worldwide phenomenon.

He will report on progress at the conference this week in Perth. Watch an interview with Naera here.

The theme for the second World Indigenous Suicide Prevention conference in Perth this week is ‘Building a stronger tomorrow: Connecting our communities through culture’.

Conference convenor Professor Pat Dudgeon said the international event encourages Indigenous nations worldwide to “gather and validate our cultural norms and realities, whilst looking at how we contribute to reducing suicide and solutions that work and promote the strength of Indigenous led suicide prevention programs”.

Dudgeon, who is from the Bardi people of the Kimberley area in Western Australia, is a psychologist and Fellow of the Australian Psychological Society, and the Poche Research Fellow at the Centre of Best Practice in Aboriginal & Torres Strait Islander Suicide Prevention (CBPATSISP) at the University of Western Australia.

She and Professor Tom Calma were co-chairs of the National Aboriginal and Torres Strait Islander Mental Health and Suicide Prevention Advisory Group.

Speaking to Croakey in Perth ahead of the conference, Calma said the overwhelming interest from international and local delegates underscored the importance of hosting the event.

“We had to lock the door at 530 (delegates) and there’s still people knocking. There’s a big interest in this area and we need governments to understand they need to support these initiatives,” he said.

Calma said the Canadian Government, in particular, had supported a number of delegates to attend. They will be joined by the Canadian High Commissioner to Australia Paul Maddison who has been a strong supporter on issues of mental health and suicide prevention.

However, Calma said the Australian Government continued to lack long-term commitment, funding and support for Indigenous suicide prevention efforts, and was still more likely to spend significantly more on road safety when the toll of suicide was so much higher.

Although incidence and prevalence varies, recent international research shows that suicide rates are elevated in many Indigenous populations worldwide, in some places more than 20 times higher than non-Indigenous peoples.

But he warns that, in the wake of increasing suicide among Indigenous peoples, “the significance of generic understandings derived from western philosophies and experiences, has been found wanting”.

The World Indigenous Suicide Prevention conference will focus on community-based solutions, the importance of community partnerships, the role of cultural practices, lived experience and data sovereignty. Like the national conference, it will also have a strong stream of presentations on LGBTIQ+ issues and for young people.

To be MCed by Aboriginal performer and writer, Steven Oliver, of ‘Black Comedy’ fame, it will be officially opened on Thursday by Indigenous Health Minister Ken Wyatt.

We, participants  in  Turamarama  ki  te  Ora Indigenous  Suicide  Prevention  Conference, held  in Rotorua,  New  Zealand  on  1 – 3  June 2016,  are  deeply  concerned  about  the  high rates of suicide among indigenous peoples.

• Summer May Finlay and Marie McInerney are reporting from #WISPC18 for the Croakey Conference News Service.