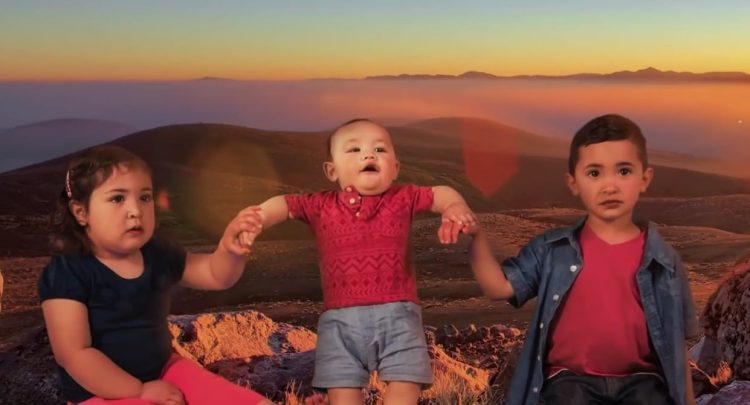 Could “reciprocal accountability” – a concept based upon a more equitable distribution of power between governments and Indigenous peoples – help to liberate Indigenous health services globally from the red tape imposed by governments (as outlined in Australia in the 2011 publication, The Overburden Report)?

These and related discussions about new models for commissioning Indigenous health services were canvassed at the recent Health Services and Policy Research Conference in Melbourne (#HSR15).

(Note, the link to the latest version of The Overburden Report has been updated).

#HSR15 provided a unique opportunity for people working in the area of Indigenous health in different countries to come together to share their experiences and learnings. Researchers working in Indigenous communities in Australia, New Zealand, Canada and South America presented a diverse range of research into the delivery of health care in colonised countries.

While clearly all countries are unique and all Indigenous peoples have different cultures, experiences of colonisation and health care needs and priorities, many of the researchers reported that they valued the experience of sharing their work with others.

It was also clear from the sessions that the learnings from research into Indigenous health issues have broader implications for the way in which we approach mainstream health care.

An issue that was discussed in a number of sessions was the concept of ‘reciprocal accountability’, particularly relevant to Indigenous health in Australia, New Zealand and Canada.

She outlined the evolution in the relationship between governments and Indigenous health organisations, starting with a system in which governments impose requirements for funding, contracting and performance on the Indigenous health sector (see this previous Croakey piece for further background).

This system has not met the needs of either governments or Indigenous communities for a number of reasons, including the fact that it constrains service providers by overly restricting the use of funding and imposing onerous reporting and administrative burdens on them.

The end result of this is an Indigenous health sector which in many areas does not perform as well as it could due to the constraints placed on it by governments, resulting in high transaction costs, poor responsiveness to communities and challenging relationships with professional staff.

This approach moves away from a hierarchical concept of accountability towards an approach that reflects a more equitable distribution of power between governments and indigenous peoples.

She identified that at the heart of this concept is the dual role that Indigenous health services play, as services providers (accountable to government for their funding) and advocates for their communities (holding the government to account).

While her research has found that there is broad acceptance of a term such as “reciprocal accountability” to describe this relationship, she also found that there was a lack of confidence in its ability to change current accountability regimes. Key barriers identified to this were the technical issues involved with measuring a more complex form of accountability and systemic racism throughout government and the health system.

Lack of trust a critical issue

These barriers were discussed in more detail in presentations from Derek Kornelsen, from the University of Manitoba and Kim O’Donnell from the Lowitja Institute and Flinders University.

Mr Kornelsen explored in more detail how a workable framework could be developed which reflects both Indigenous and Western concepts of reciprocal accountability. He found that this can be informed by using a fiduciary frame to clarify the nature of this relationship, as this entails a consideration of Indigenous perspectives on a legitimate relationship with the state.

In her presentation based on Australian research, Dr O’Donnell highlighted the importance of building strong working relationships between government departments and Aboriginal Community Controlled Health Organisations, but pointed out that there is a lack of national strategic direction to support engagement with Indigenous leaders and peak bodies.

In her consultation with stakeholders she found that there was a lack of trust between stakeholders involved in funding relationships and a lack of agreed understanding about their respective roles.

Dr O’Donnell argued that underpinning this situation is a failure among some people in a position to influence the Indigenous health sector, such as those within the bureaucracy, to admit or fully explore the reality of Australia as a colonised nation.

The presentation by Associate Professor Josée Lavoie on her work with Associate Professor Lloy Wylie in Canada expanded on the concept of “reciprocal accountability” in the context of recent changes to the funding arrangements for First Nations health services in British Colombia (BC), Canada.

A/Professor Lavoie described how in 2013 the First Nations Health Authority (FNHA) took over the responsibility for funding and service provision to all BC First Nation communities. A key component of the agreement between the FNHA and the Canadian Government was a commitment to reciprocal accountability, although this was not clearly defined.

Through stakeholder interviews and an analysis of key documents, Professor Lavoie and A/Professor Wylie found that while the details of reciprocal accountability have yet to be fully articulated, there is a shared understanding between stakeholders of a shift away from a traditional principal-agent contractual arrangement towards a more equitable partnership which paves the way towards health self-governance for First Nations people in Canada.

A New Zealand perspective was provided in the closing plenary session by Dr Tanya Allport from Te Pou Matakana.

Dr Allport described the concept of ‘whānau ora’ as being central to the provision of Māori health services in New Zealand. This term can be loosely translated into English as ‘family and community well-being’ but has a much broader and more powerful sense of ‘strength in connectedness and culture’ that is fundamental to the concept of health care within Māori culture.

The words of the Pou (patron) of Te Pou Matakana, Dame Tariana Turia, encapsulate the richness of this term:

Whānau Ora is a source of comfort, of motivation, of encouragement.

Whānau Ora is about whānau being empowered to develop a plan for our future; and to trust in our own solutions.

It is about restoring to ourselves, our confidence in our own capacity to provide for our own – to take collective responsibility to support those who need it most.

Dr Allport outlined the approach taken by Te Pou Matakana to commissioning services for Māori which reflect this concept of ‘whānau ora’. She described how Te Pou Matakana is responsible for commissioning initiatives that will drive whānau health and wellbeing by building on the strengths and assets of Māori communities in the region.

The aims of these initiatives are defined in a broad sense as enabling Māori to enjoy good health, experience economic wellbeing, be knowledgeable and well informed, be culturally secure, resilient, self-managing and able to participate fully in te ao Māori (Māori culture) and in wider society.

This involves both receiving and distributing government funding and includes active engagement with Whānau Ora Partners to help them build capacity to achieve positive outcomes as well as advocating for policy change that will benefit whānau to government and central agencies.

They included both “experts’ who are well established leaders in this field, such as Professor Judith Dwyer, and younger early career researchers, such as PhD student Angelique Ferdinand, who presented her research on the approach taken by two health services in Chile to the traditional healing practices used in their communities.

These presentations reflected the depth and diversity of this field of health services research, and highlighted both the challenges and opportunities being addressed.

Reporting via the Twittersphere 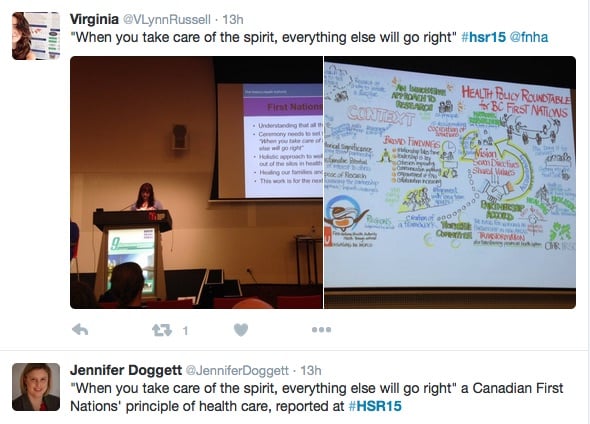 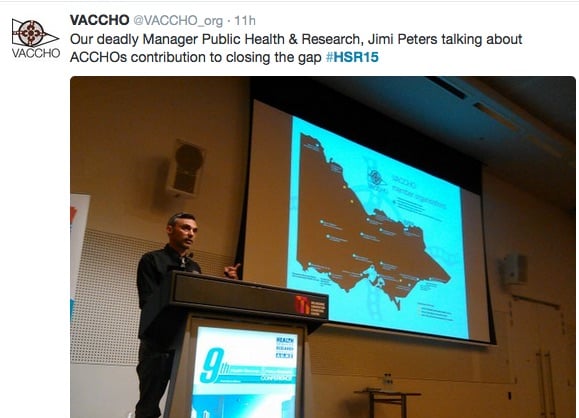 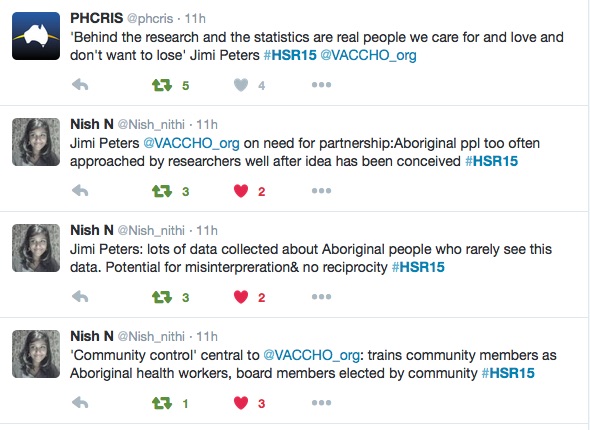 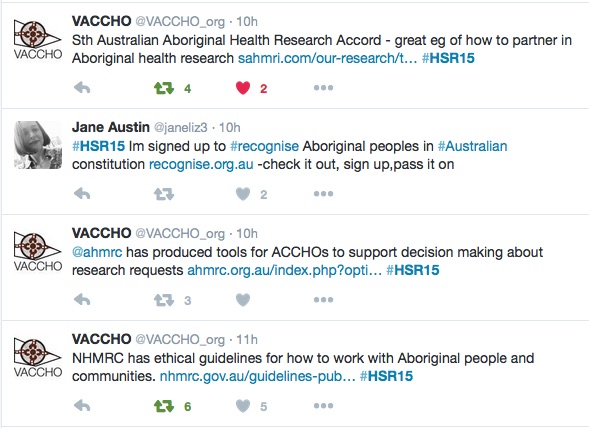 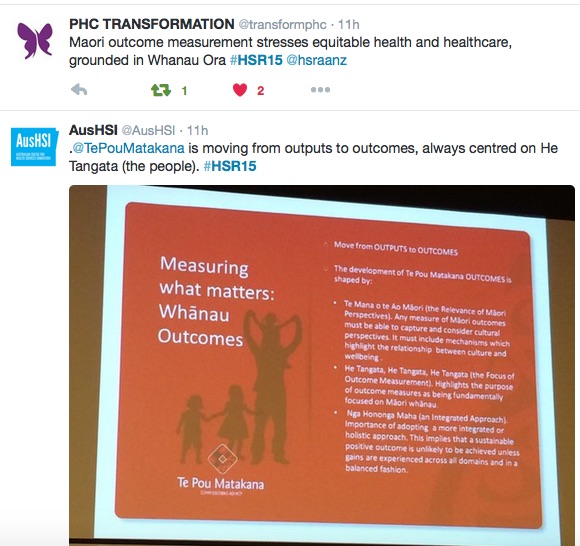 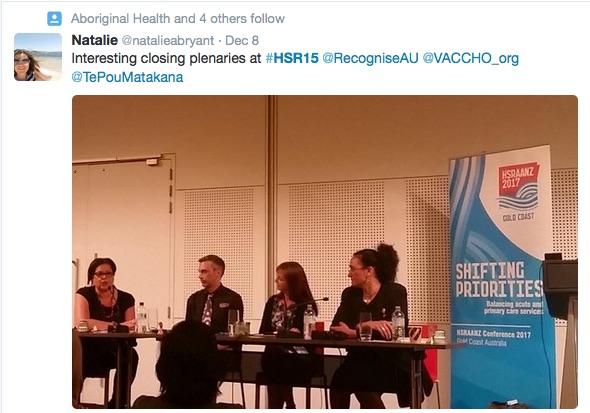 • Further reading in this report from The Lowitja Institute, A Reciprocal Relationship: Accountability for public value in the Aboriginal community sector.

• Photo credit: the feature image is taken from a clip on the website of Te Pou Matakana, which is responsible for commissioning initiatives to drive North Island whānau health and wellbeing by building on the strengths and assets of whānau and Māori communities.

***
• Jennifer Doggett is covering the conference for the Croakey Conference News Service.

PrevPreviousAnother body blow to the public health sector, and a campaign launches to SAVE AIVL
NextAll I want for Christmas is…Next