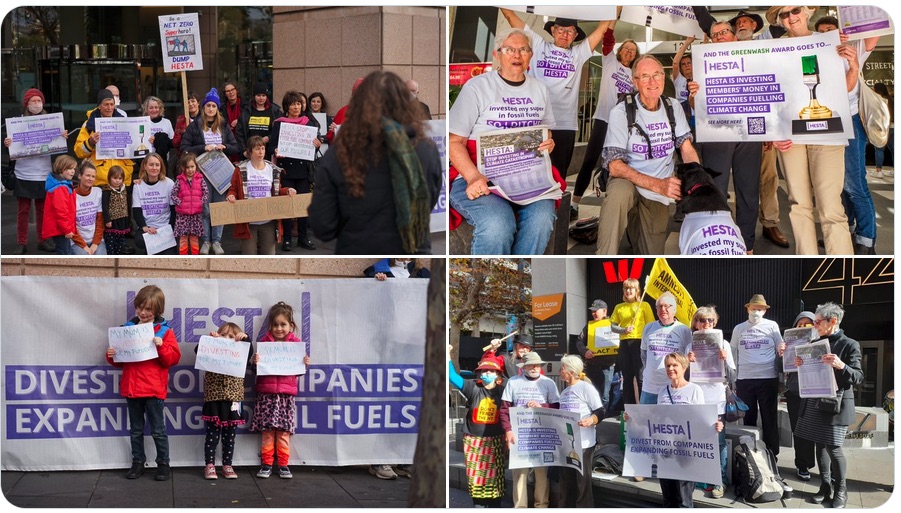 Introduction by Croakey: Twenty-one years ago, Dr Richard Barnes decided to put his superannuation with HESTA because of the fund’s proactive stance on avoiding tobacco companies.

Barnes recently joined more than 130 health and community services professionals in withdrawing their funds from HESTA to protest the fund’s investment in companies that are expanding fossil fuel projects.

On the first national superannuation divestment day on 17 June, protests were also held at HESTA offices in Melbourne, Sydney, Brisbane, Adelaide, Perth, Bendigo and Castlemaine (as pictured above).

According to a statement by campaign organiser Market Forces, the divestment was expected to result in an estimated $11.7 million worth of members’ retirement savings pulled from HESTA.

In a related article at The Guardian, a HESTA spokesperson said the fund believed active ownership of companies was more effective than divestment alone at driving change.

This is not an argument that convinces Barnes, a paediatric anaesthetist, who explains below why he took the decision to divest.

I have been a member of the HESTA superannuation fund for 21 years, but I am saying good-bye. I am a medical practitioner, passionately concerned about the world’s rapidly worsening climate crisis. Naturally, I am particularly concerned about the impact global heating is already having on the health, indeed the very lives, of millions of people in Australia and around the world.

I work with children as a paediatric anaesthetist and I am painfully aware that the children I care for today will grow up to inherit the worsening climate crisis my generation is leaving them.

HESTA is a large industry super fund, managing the retirement savings of close to a million Australians who work in healthcare and other caring professions. I believe many superannuation fund members would be shocked to learn that out of total investments of $65 billion, HESTA has $2 billion invested in companies whose primary activity is expanding the use of fossil fuels (data from Market Forces).

Those companies include Australian fossil fuel giants Woodside and Santos. Woodside is currently developing the Scarborough-Pluto gas extraction project off the coast of Western Australia, which over its lifetime will result in the emission of 1.4 billion tonnes of greenhouse gases.

To put that into context, rooftop solar energy in Australia currently prevents the release of 20 million tonnes of carbon dioxide (C02)-equivalent gases per annum, thanks to our world-leading home solar installation rate. So the efforts of an entire nation of rooftop solar owners will take 70 years to balance the impact of that single mega-project.

Santos’s Narrabri coal seam gas project in NSW, also under development, will result in the release of a further 120 million tonnes of CO2, thus, undoing another six years’ worth of Australia’s rooftop solar savings.

I joined with over 130 other HESTA members, to move my retirement savings to funds which actively exclude fossil fuel investments.

I have been asked why I don’t just choose HESTA’s “sustainable” investment option.

I already did that, many years ago, but I’ve realised that the great majority of HESTA’s members opt for the default “balanced growth” option, which has five percent of its shareholdings in companies that are worsening the climate crisis. This is not good enough.

An industry super fund whose members work in healthcare and other caring professions needs to ensure that the investments it holds on behalf of all its members are not contributing to the destruction of our precious biosphere.

There is growing evidence from the IPCC (Intergovernmental Panel on Climate Change) and scientists globally that we need urgent action to set and meet ambitious net zero targets and immediately end new fossil fuel developments. Without such urgent action the risks will be catastrophic for the health of people and the planet.

It has been claimed that HESTA could have more impact by engaging with, rather than abandoning, fossil fuel companies. I very much support engagement and activism by super funds. But engagement has not worked and cannot work with companies whose entire business and reason for existence is fossil fuels, and which are actually increasing their fossil fuel activities.

I hope that this divestment action by healthcare professionals sends a clear message to HESTA (and other super funds) that they must act in the interest of all their members by immediately divesting entirely from fossil fuel companies.

As individuals, we often feel powerless to bring about change. By taking divestment action, we can send a loud message about the seriousness of the situation and the need for urgent action.

I made the decision to place my super with HESTA 21 years ago because of the fund’s proactive stance on avoiding tobacco companies.

It is a great pity to be leaving HESTA now because it has chosen not to be so proactive in abandoning planet-destroying fossil fuel investments. 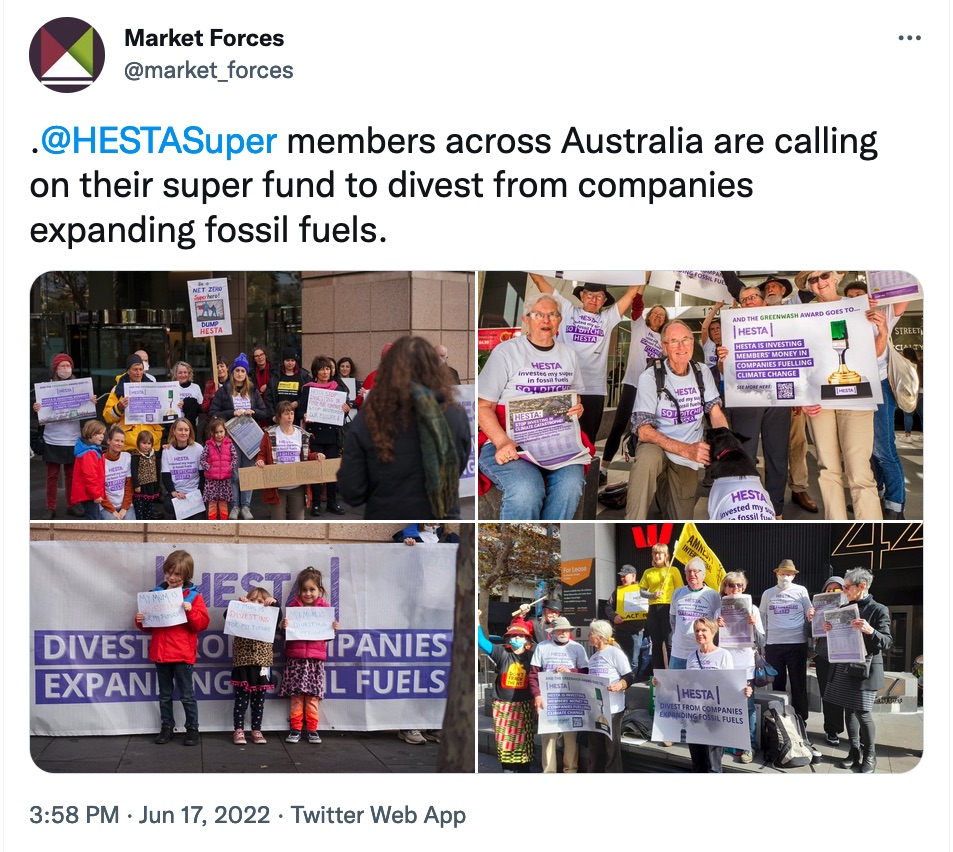 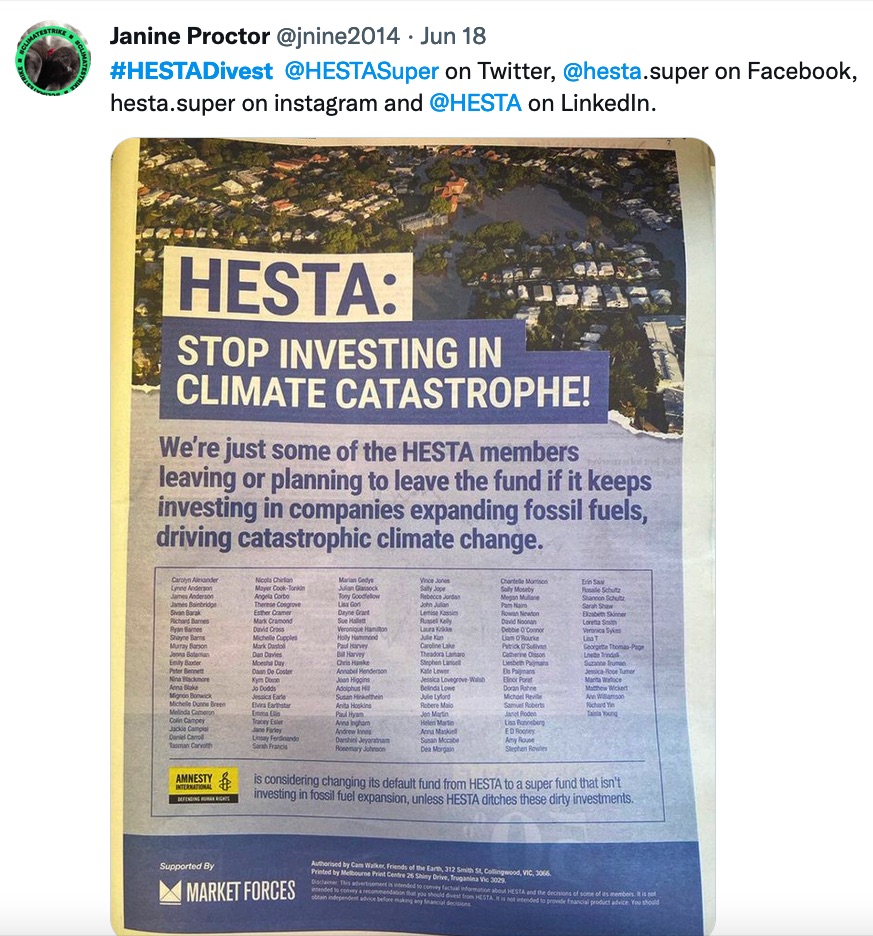 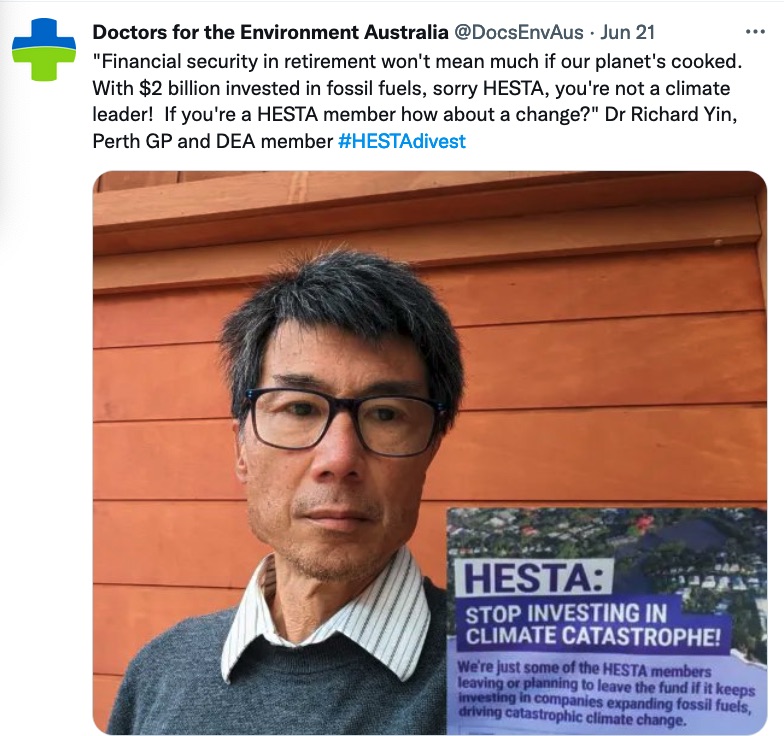 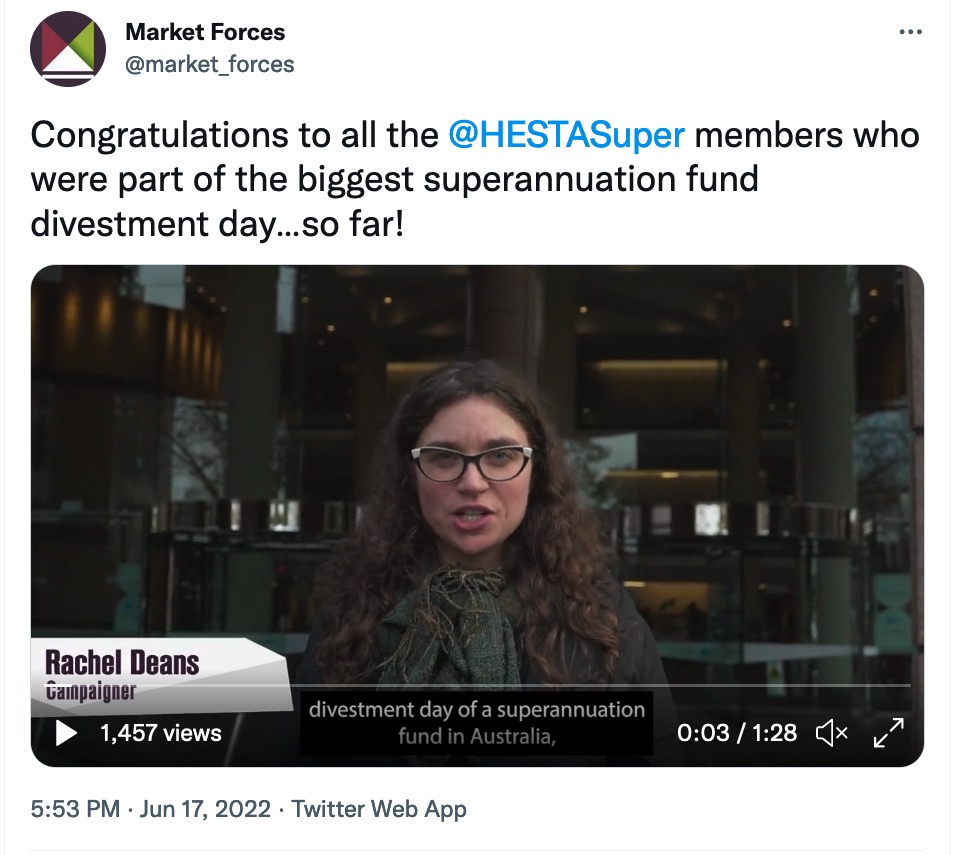 Watch the clip above here.

See Croakey’s archive of stories on the climate emergency.

PrevPreviousFirst Nations midwives’ leadership and care are central for improving outcomes
NextNow there is some commitment to national health reform, but this is not the best way forwardNext