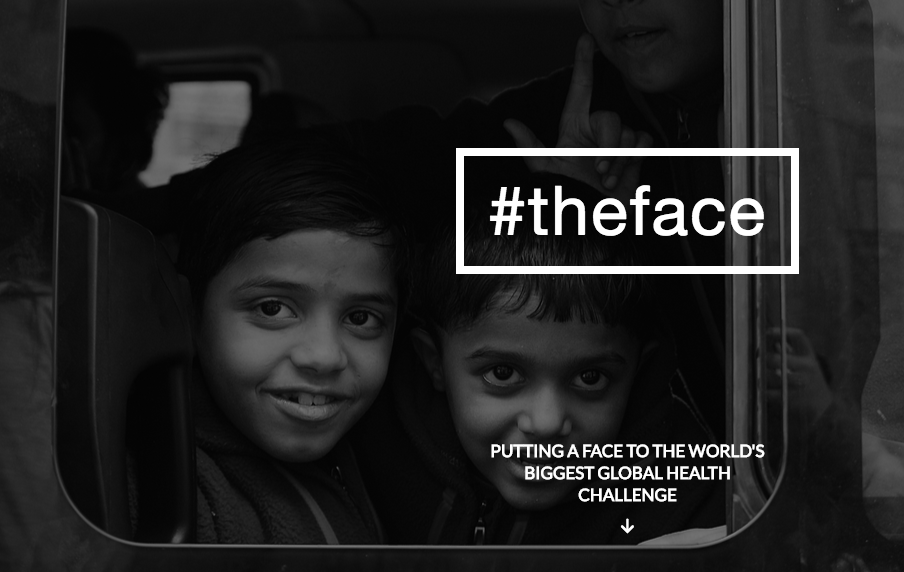 A new analysis of health risks in 188 countries has found that the greatest cumulative impact on health comes from poor diet.

A combination of 14 dietary risk factors – including low intakes of fruit, whole grains, and vegetables, and high consumption of red meat and sugar-sweetened beverages – contributes to the highest number of deaths worldwide, through ailments like ischemic heart disease, stroke, and diabetes.

The findings are from the latest publication of the Global Burden of Disease Study 2013, just published in The Lancet.

The publication was timely for delegates attending the recent Population Health Congress in Hobart, where there was a major focus on food-related concerns.

Presentations ranged from a call to rally globally against the “agile, ruthless, deep-pocketed enemies of public health”, to the effects of racism and wifi on the eating choices of Aboriginal children and young people.

Calling for a smarter food system 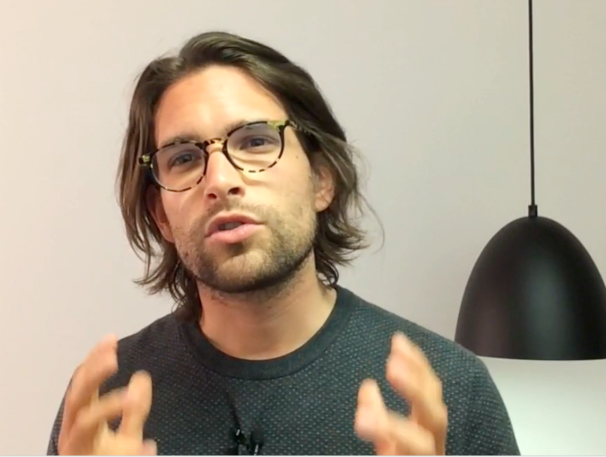 “Our enemies are many, and they’re agile, ruthless, with deep pockets and they have everything to lose.”

At the heart of all of this was food, once a catalyst for major gains in life expectancy but now a system that threatened to erode those gains.

“Deeply flawed and built for profit not health, what we grow and put in our mouths has become the single biggest health threat in our time and contributes some 30 per cent of global greenhouse gases,” he said.

“In an age where food is more processed, globalized and privately controlled, we are literally battling a war on obesity.”

But a smarter food system could also be “our silver bullet” for both planetary and human health, and a unifying factor across religion, culture and borders, he said.

He called on delegates to find ways to connect with each other across the public health sector, other sectors and the broader community, and to look to new approaches, new allies, and a new language.

“I’m here to challenge you to change to stop seeing disease and start seeing systems”, he said, inviting delegates to check out the #facetoface project and to be part of Festival 21: Our future through food event in Melbourne in December.

What was the number one thing that an Aboriginal community in South Australia wanted the government to do to promote healthier lifestyles for its children and young people?

They were certainly considerations, but what community members came up with as their first choice in a final list of priorities was “something quite different”, University of Adelaide researcher Dr Jackie Street told the conference.

They wanted more education in schools about Aboriginal and Torres Strait Islander history and culture to reduce racism.

“They said ‘that makes a huge difference for our children, on their ability to eat well and feel well’,” she said. 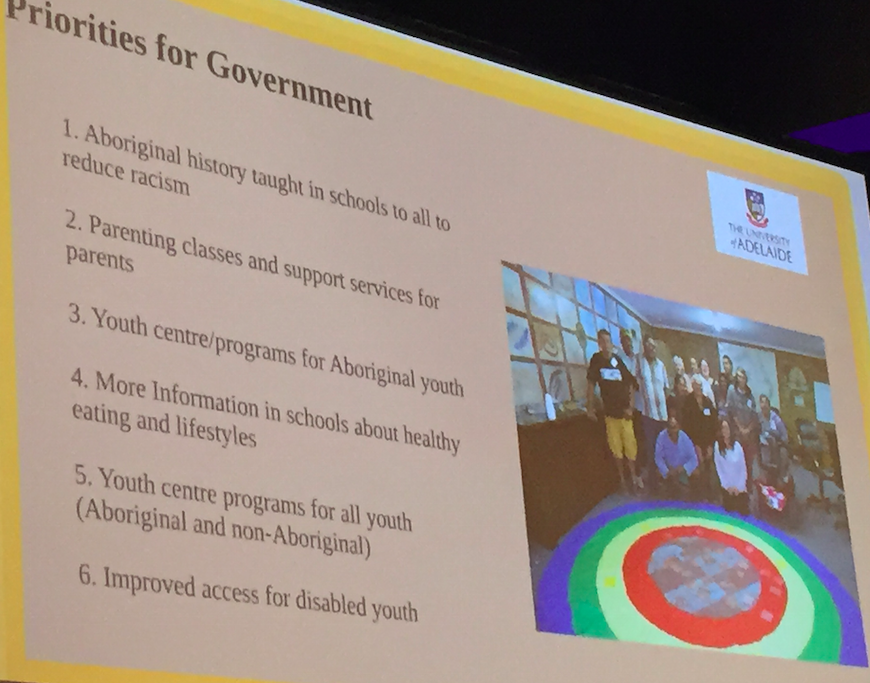 Dr Street and colleague Dr Dylan Coleman* conducted consultations with the help of local Aboriginal community organisations, including a workshop in Port Lincoln that used an Indigenous storyboard model centred on community values and knowledge. 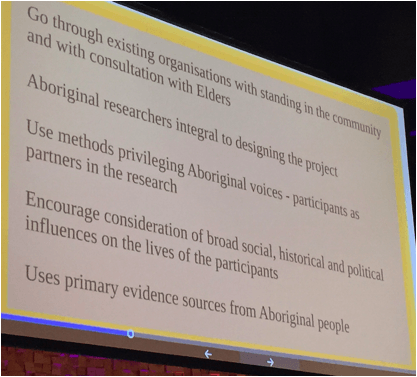 The project’s overriding question was: What should governments do in Australia to provide an environment that encourages Aboriginal children to eat healthy and be physically active?

It looked first at why people were not making healthy choices: 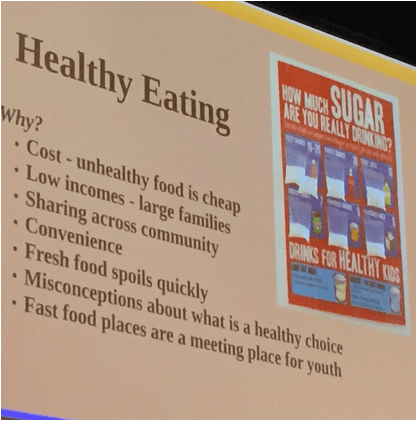 A key issue was that fresh food spoils quickly, but another was that fast food places were meeting places for young people in under-serviced communities – and also provided wifi access.

The cost of sport was also a barrier: the AFL subsidised football programs were great, but netball was often too expensive for families with girls.

And parents wanted to be rid of cartoon characters on food, saying it was too stressful to go to supermarkets with their kids because of food products marketed, for example, by Disney.

As the Healthy View abstract outlined:

“Despite encouragement to think about the potential for legislative measures to impact on health behaviours in children, participants consistently referred to the value of education, particularly nutrition, cooking and shopping skills, and the responsibility of parents.

Schools were identified as the primary vehicle for delivering programs to children but strict healthy food policies in schools were generally not supported.

There was some support for regulatory measures such as food labelling and restrictions on advertising to children but these were not seen as a priority. The forum identified broader issues, addressing social determinants particularly racism, as essential for child wellbeing.” 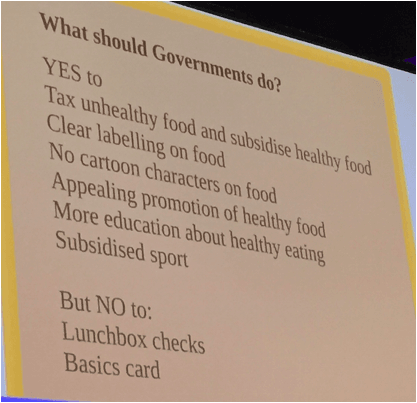 See also this insight from another presentation barriers to fruit and vegetable intake undertaken in a longitudinal study by National Centre for Epidemiology and Population Health in the ACT. 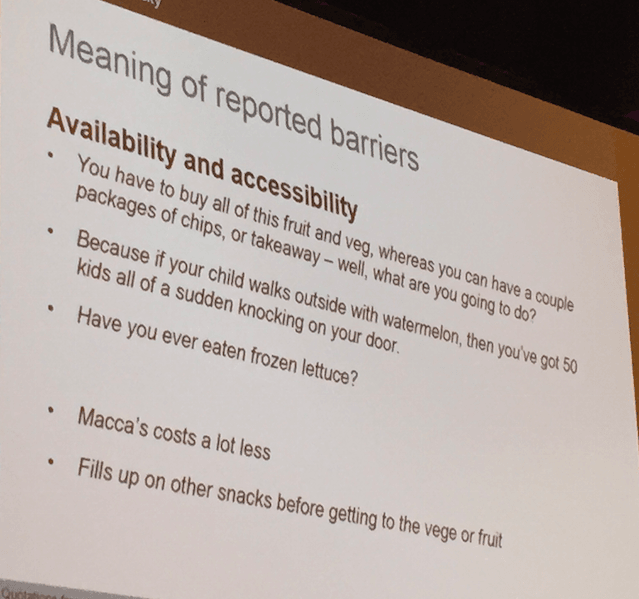 * Coleman’s story of her mother’s childhood – ‘Mazin’ Grace – took out the 2011 Arts Queensland David Unaipon Award for an unpublished Indigenous writer. See also her Walking With Us film.

The conference heard that former US President Ronald Regan believed government’s view of the economy could be summed up in a few short phrases: “If it moves, tax it. If it keeps moving, regulate it. And if it stops moving, subsidise it.”

ACT Chief Health Officer Paul Kelly told the conference that former New York City Mayor Michael Bloomberg tried all of Reagan’s nominated interventions during his time of office from 2001-2013, which saw “a great flourishing of public health interventions, starting with smoking and moving to obesity.”

Not all of Bloomberg’s efforts were successful: his bid to ban super-sized soft drinks was hit with a full onslaught from manufacturers including Coca-Cola and PepsiCo.

But Kelly said Bloomberg did succeed in ‘incentivisation, such as through the introduction of mobile fruit and vegetable ‘green carts’, cycling infrastructure and fresh food vouchers and calorie labels.

As part of his PhD, Kelly conducted a range of interviews with New York City officials (health and other portfolios), community based organisations, politicians, industry and academics to explore motivation, leadership, governance, public value, sustainability and success for the whole-of-government approach Bloomberg took.

His conclusions were that while not all of the approaches were applicable to Australia, some were: legislative reforms, policy synergy, community and industry engagement, cross-sector participation and the use of evidence are all readily adaptable.

A major driving force was of course Bloomberg’s political commitment and leadership, and that he was “driven by data”.  However, he also came up against a very diverse “coalition of the unwilling” and opponents of “nanny state-ism” – from “cupcake mums’ protesting that they couldn’t raise money for their schools, through to junk food giants like Coca-Cola.

Other lessons learnt, Kelly said, were: “seeing is believing – pilot programs do have a role” and “this stuff takes a long time”.

It was a timely insight for Australia as the Senate’s ‘nanny state’ inquiry got underway this week. (See the terms of reference and links to submissions here.) 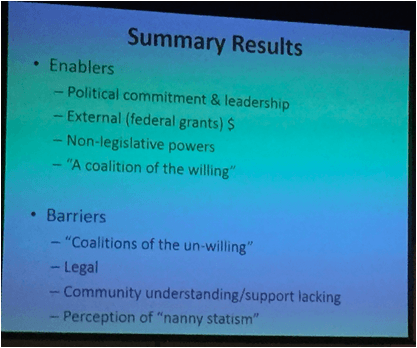 Our supermarkets trumpet their fresh food focus – but are they healthy places?

Croakey readers won’t be surprised to hear they’re not, according to Deakin University researcher Adrian Cameron. But he is part of a team testing how and whether we can make them more so.

Supermarket retailers have long known that the placement and marketing of products is a key factor for shopping decision, particularly when it comes to impulse buys.

Cameron told the conference that Deakin’s recent study of 35 Melbourne supermarkets showed that four out of every 10 end-of-aisle displays and every single checkout promoted junk food – soft drinks, chocolate, confectionery and chips. And it was greatest, he said, in disadvantaged areas.

The logic? End of aisle displays increased the sales of soft drinks by 52 per cent and alcohol by up to 46 per cent.

And compared with supermarkets from seven other countries – the US, Canada, Denmark, Sweden, Netherlands, UK and New Zealand – Australian supermarkets have been shown to be world leaders in such promotions: behind the UK only on junk food and top for soft drinks.

Supermarket catalogues, “an important indicator of the healthiness of stores because of the link between what is in them and what is placed near check-outs”, were also illuminating: over half the products advertised were unhealthy, either discretionary foods or alcohol.

And Cameron said an ecological study looking at the size of store versus obesity prevalence found “an almost perfect correlation”, with the largest stores in the US, Australia, and New Zealand.

He said: “It’s hard to say if it’s cause or association but I would argue that larger supermarkets are an indicator of food culture that’s obesogenic – that is, encourage car use, buying in bulk, less frequent shopping so less fresh food etc.”

In response, Deakin has been testing a range of in-store interventions in a number of IGA supermarkets in regional Victoria, changing end-of-aisle, checkout and island bin displays to see: 1. If it is possible to change the environment within stores and 2. If this changes what consumers buy.

The early results have been encouraging – and not just for public health, but for the supermarkets who can make higher margins from fresh food sales, though the enthusiasm of individual store managers and manufacturer placement contracts were important factors. The research team has not yet analysed the sales data, to see if there was any effect on purchases.

It’s a case of ‘watch this space’.

Thanks to those who tweeted the presentation, Who has the power in nutrition policy in Australia?, by Katherine Cullerton from the Queensland University of Technology. 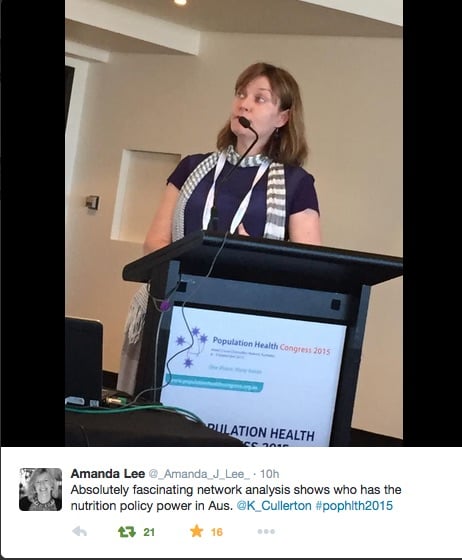 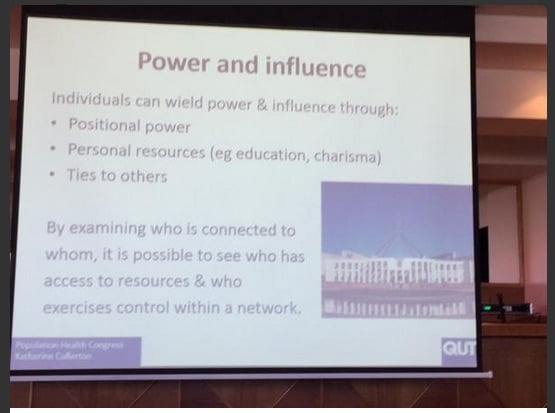 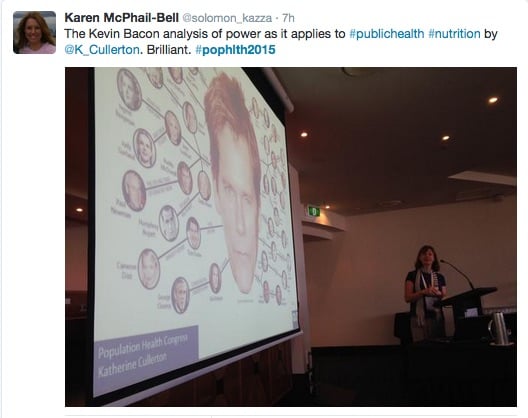 And a final telling point:

PrevPreviousWhat does #boomgate mean for health and healthcare?
NextWill a change of PM bring a change in approach to health issues?Next