A healing walk with ancestors along the Trail of Tears

An innovative program to develop wellness among people of the Choctow Nation in Oklahoma is promoting cultural strengths and ancestral teachings to enable healing from historical traumas, instead of putting the focus on health problems and Western interventions.

The program, which takes community members out to walk an historically significant trail for ten days, following their ancestors’ footsteps, was profiled in a powerful keynote address to the Lowitja Institute International Indigenous Health and Wellbeing Conference 2016 in Melbourne last week.

During the first half of the 1800s, as many as 100,000 American Indians were forcibly re-located west of the Mississippi River from their homelands in the East, along what is now known as The Trail of Tears.

They were rounded up at gunpoint, often separated from their families, many were given no time to bring their possessions, and forced to travel, by foot, horse, wagon and boat.

Now around 100 of their descendants from the Choctaw tribe have walked in their footsteps in an effort to find new cultural solutions to chronic health issues and to transcend historical trauma.

“Our ancestors did not walk that Trail of Tears for us to be dying the way we are dying,” Professor Karina Walters told the Lowitja Institute International Indigenous Health and Wellbeing Conference 2016 in Melbourne last week.

Walters, an enrolled member of the Choctaw nation of Oklahoma who directs the University of Washington’s Indigenous Wellness Research Institute, was approached by her tribe to come up with a break-through health innovation.

Choctaw people currently have high rates of obesity and are on track for one in three people to be suffering Type 2 diabetes by 2050.

For the first time in Choctaw history, Walters was told, large numbers of parents are set to outlive their children, despite the community having access to all the standard interventions, including a state of the art gym, walking paths, and healthy hospital menus.

Walters said she asked the director of the local health service that invited her to do the project why these services were seeing so little impact on chronic disease rates. He told her there was “a sadness that I can’t put my finger on”.

Walters realised she needed to “flip the script” for a health intervention, to create an innovation that was not about more services, but about the power, love and vision their ancestors expressed for future generations on the Trail of Tears, in their survival of colonisation and forced expulsion.

Instead of taking Western medical responses and adding a cultural lens, Walters sought to create a Choctaw model, with Western extras where needed.

We’ve spent too much time creating our wellness in systems of services.

They’re important, but we’ve become dependent on services to be cultural spaces for us.

We really have to move beyond static models, to recognise complex interconnections of health and wellbeing from structural inequality to epidemiological memory.

Literally our bodies, minds and spirits are inextricably linked across time and space.”

With the Choctaw community, Walters designed the Yappalli (“to walk slowly and softly”) Choctaw Road to Health program to take community members out on the trail for ten days at a time, where they could “wake up in the morning, say prayers and think about what their ancestors could teach them today.”

On the trail, people do not discuss substance abuse or suicide interventions but instead explore traditional teachings and medicines for staying healthy and well and in balance.

They are encouraged to think about the tribe’s original teachings or instructions about life and living, and to ask:

Echoing an earlier powerful presentation by Chief Wilton Littlechild about the forced removal of Canada’s Indigenous people, Walters described the violent and traumatic history of colonisation in the United States.

It manifested not just in military conflict and forced expulsion, but – like Canada, Australia and elsewhere – with many tens of thousands of American Indian children removed from family and placed in boarding schools run with militarised discipline and high rates of sexual assault.

“The whole intention was ‘to kill the Indian to save the man’,” she said of widespread policies to “civilise” American Indian people by teaching them English and converting them to Christianity.

“It was a direct spiritual assault, not just an assault on body and land,” she said. 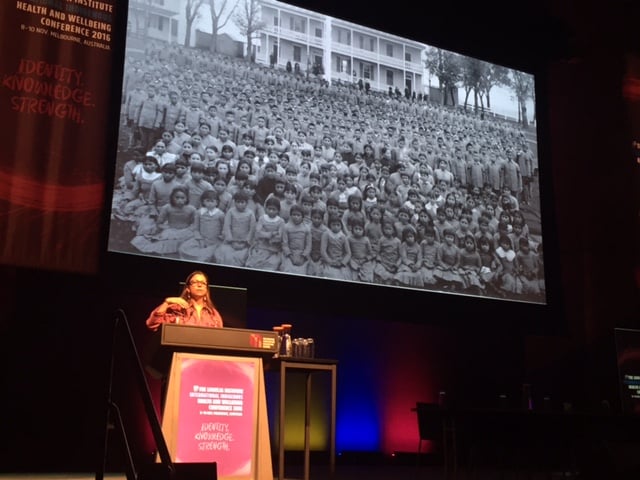 A book, Voices from the Trail of Tears, provides heart-wrenching accounts of the forced removal of many Indian tribes to make way for white settlers following the 1830 passage the Indian Removal Act. One reports squads of troops sent to search out with rifle and bayonet every small cabin for their occupants. It says:

“Families at dinner were startled by the sudden gleam of bayonets in the doorway and rose up to be driven with blows and oaths along the weary miles of trail that led to the stockade. Men were seized in their fields or going along the road, women were taken from their (weaving) wheels and children from their play.”

In the book, editor Vicki Rozema says the Trail has become “a symbol of the oppression of all native Americans in the expansion of the United States to the Pacific Ocean….The removal of the southeastern Native Americans west of the Mississippi is one of the great tragedies in United States history. While each of the five civilized tribes has shown incredible resilience in fighting back from the decimating effects of their removal, the terrible injustice of broken treaties, discriminatory laws, unenforced court rulings, land grabbing, and ethnocentric intolerance, all done in the name of western expansion, will forever be a blight on the memory of the American people.”

Walters, quoting a Choctaw proverb – “the breeze that ruffles the stream knows not the depth below” – told delegates she had made it her career mission to catalogue the impact of that history after being told in academic circles there was “no evidence” that trauma visited on American Indians early in colonisation had any generational impact.

While the term intergenerational trauma is used in Australia to refer to the historical trauma of colonisation (see, for example, the mental health text Working Together), Walters distinguishes between the two.

She says intergenerational trauma can be triggered by natural disasters like earthquakes and the flooding of homelands, and defines historical trauma as relating to “man-made events that target particular communities with the intention of committing genocide or ethnocide or epistemicide – the destruction of knowledge systems”.

Her research has found evidence of “intergenerational transmission” of post traumatic stress, depression and drug and alcohol abuse, she said.

One of its biggest impacts, she said, was to disrupt relational ways of being, including with the land, and to create “a narrative about ourselves” that is not healthy, from alcohol abuse through to shaped understandings that “bigger babies” were healthier because they were the only ones in previous generations to survive famines and dislocation.

“Health risk is not something innate to our biology, but the cumulative impact of colonisation and racism over our and our ancestors’ lifetimes,” she said.

However with the Yappalli project, Walters felt she was at a new stage in her life, with communities saying they knew about historical trauma and asking instead, “how do we transcend it?”.

They determined the project would not be defined by collective traumas and struggles and a colonial mindset, but by ancestral teachings, their “original instructions for healthful living”, the protocols for responsibilities to one another and themselves.

It has been run three times over three years, preparing and supporting nearly 100 Choctaw women plus Indigenous and non-Indigenous allies to walk a small stretch of the Trail, which was designated as a national historic trail by Congress in 1987.

Covering about 120 kilometres over ten days, it’s taken them down dirt paths and through hills, forests and swamps, camping in all sorts of places where the trail in still intact, from wildlife refuges with swamp creatures, bugs and alligators through to the downtown campus of the University of Arkansas.

In their preparation and while underway, the participants have explored Choctaw history, language and culture, chronicling daily reflections, meeting with local people and visiting museums.

The project’s goal is to graduate 150 Choctaw women health leaders from 12 tribal districts over five years – individuals who have transformed their own lives as examples for friends and families and who can then work in their communities within a deep cultural framework that also incorporates Western behavioural science, but with the foundation “always Choctaw”. 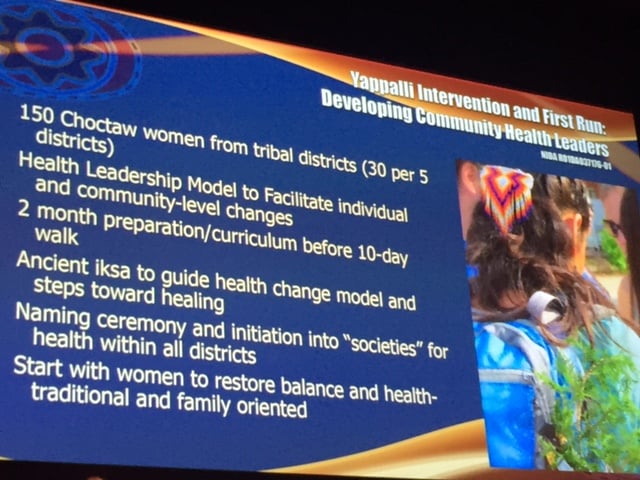 The project reported that engagement with place and experiential learning, particularly the physical and emotional challenge of the Trail, facilitated changes in health beliefs, attitudes, and behaviours, including some participants permanently losing significant weight.

As Walters said in this article:

Interventions often do a great job telling people what to do and what not to do, but what they really need to do is to remind people why we exist as Choctaw. Why are we here as a people? Why do we live? That’s the glue that holds together any interventions we do in the community.” 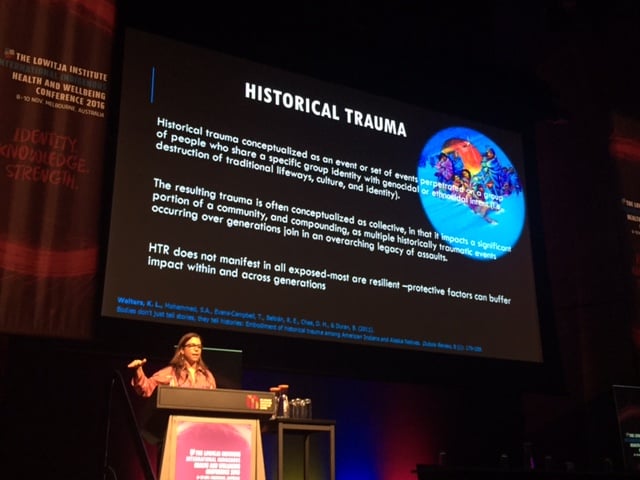 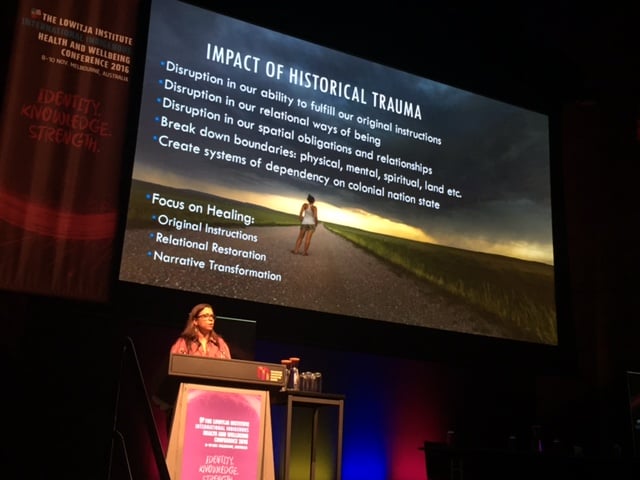 PrevPreviousPatient-centred care and staff wellbeing: everything is connected
NextRed Versus Blue – The Effect Politics can have on Public Health: JournalWatchNext