A lesson from NZ on the hazards of punitive welfare reform

The toll that structural violence takes upon disadvantaged people in NZ was highlighted in a keynote address to the Public Health Association of Australia’s annual conference in Melbourne last week.

Darrin Hodgetts, Professor of Societal Psychology at the University of Waikato, described how punitive welfare reforms exacerbate the difficulties faced by many people who are already struggling, and said that state agencies increasingly enact repression rather than care.

New Zealand social scientist Darrin Hodgetts says the diagram below maps the “chaotic landscape of despair” that defines the daily lives of an increasing number of poor New Zealanders.

It tracks all the interactions that one family had with government agencies, not-for-profit community services, and private providers, over a two week period.

As he says, it is a full-time ‘job’ for at least one family member to try to navigate such an obstacle course (Click on image for more detail). 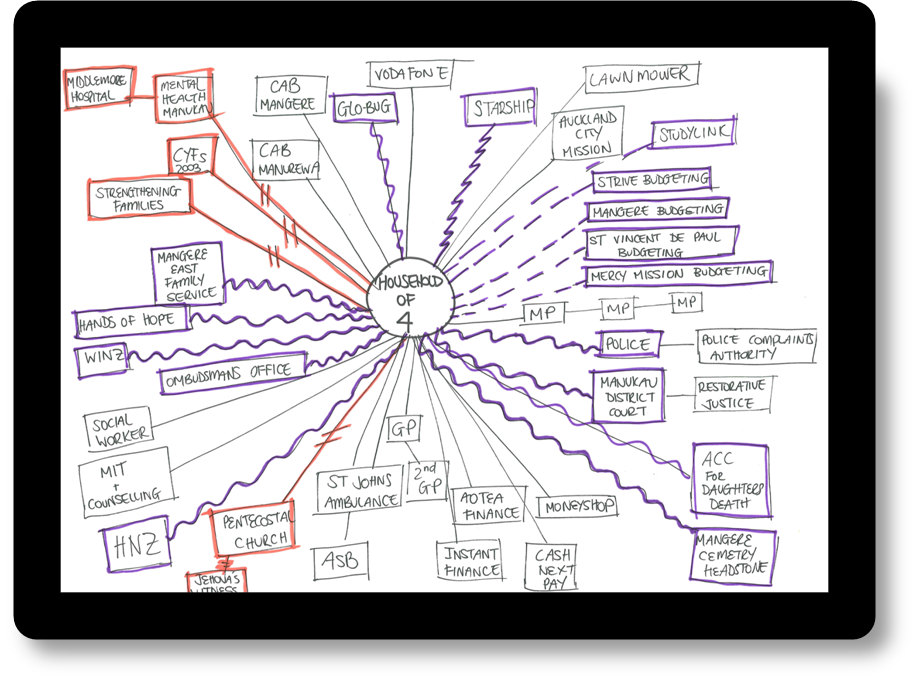 “Society says these families are chaotic and can’t manage themselves,” Professor Hodgetts told the Public Health Association of Australia’s (PHAA) annual conference. ”I’d argue it’s not the families who are chaotic, it’s a chaotic mess of public and private institutions.”

Hodgetts says the proportion of New Zealanders officially living in poverty has doubled to 12 per cent of households over the past two decades. The same period, he says, has seen the systematic dismantling and privatisation of state welfare supports.

“The current Government has embraced the principle of conditionality, the notion that support is only warranted for those who comply with regimes such as drug testing, parenting classes and external budgetary monitoring…aimed at addressing personal deficits.”

Emergency grants for food and housing can only be given with evidence of a budget audit of a family’s accounts to ensure they are not wasting money on alcohol or cigarettes.

“One simply has to look at the National Party’s website to see the celebrating of punitive approaches to welfare. The current Government in New Zealand is a health hazard…Not only do they not promote an agenda for social justice and health, they actively work against it. Poverty is the product of the inequitable distribution of resources in society more than individual deficits so government interventions to punish the poor miss the mark.”

Hodgetts, Professor of Societal Psychology at the University of Waikato, drew examples from the Auckland City Mission Family 100 project, which explores how 100 families who have been accessing the Mission’s food bank with high regularity make sense of and respond to their situations. The cohort consisted of 40 per cent Maori, 25 per cent Pacific Islander, 22 per cent European, and 13 per cent Asian and other minority groups.

He admits some researchers would have ethical concerns about the project’s decision to provide the families with regular food parcels for a year in exchange for them speaking frankly with social workers about their experiences every two weeks.

He doesn’t share the concerns: “It’s based around reciprocity. If you have people who don’t have enough to eat and you don’t reciprocate for sake of the concerns of a minority of researchers around inducements, then you’re involved in ‘poverty tourism’,” he says.

In looking at the information gathered, the project employed the concept of structural violence, which was developed to examine colonialism, but which Hodgetts believes can equally be used to look at neo-liberalism. (Click on image below for more detail). 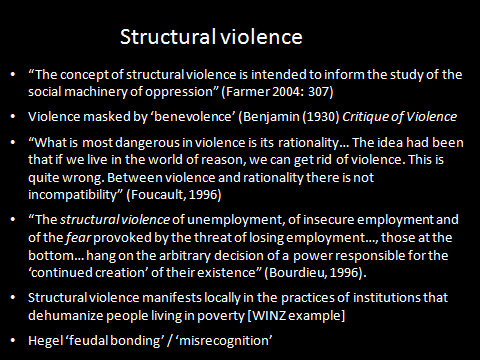 The aim was to ‘give voice’ to participants, but also to draw on theoretical knowledge and abductive reasoning to interpet family accounts. “We need to situate these accounts systemically in order to understand the everyday lives and dilemmas of families as well as the lack of care and violence of the New Zealand government towards families in need,” he said.

In reflecting on the accounts of families, Hodgetts took criteria that psychologists use for screening for abusive personal relationships to look at the families’ interactions with services, including:

The result? “Children go hungry and their parents are afraid of seeking assistance from WINZ; they don’t raise certain topics for fear of repercussions, they feel they can’t do anything right, that they deserve to be treated adversely, that it’s their problem, their fault, and they often experience helplessness,” he said.

“If you look at the characteristics of violent relationships and the criteria used to administer welfare entitlements by WINZ, you find a match; that is, ‘you do what we tell you, go to those classes, or we will take your income away and if necessary remove the kids’. It’s about standover tactics and emotional and economic control, where women have to justify buying tampons and pads.”

One woman described her experience of attending appointments at WINZ:

“They could have a little kids’ play area. Maybe those plastic screens between each cubicle where you sit because then not everyone’s gonna hear your conversation. I don’t want everyone seeing me cry. WINZ is a last resort for a lot of people. Toilet facilities, especially if you’ve got a little kid that needs to go. You could be sitting and waiting for your appointment, your kid really needs to go and you’re gonna walk out of there, across the road, go through the mall, get to the toilet then come all the way back to oh, your appointment was 10, 15 minutes ago.  I’ve had to rebook an appointment just because I needed to take my little boy to the toilet…  There’s a lot of people go [urinate] on the streets [outside]”

Another revealed her experience after her son had been hit by a car:

“After my son’s accident, we went straight from rehab to WINZ. I needed a food grant… He was all bandaged up and not quite with it. We saw a WINZ worker who asked “why do you need help?” “Look at my son”… He still had the drip in his hand. I told him what had happened to him. My son sat there listening to it all and started crying like a baby cos he got scared because I started raising my voice. I felt quite degraded to the point that this WINZ worker turned around and said, “Wasn’t he looking when he crossed the road?”… I walked out with nothing.”

Hodgetts says the stories of participants showed WINZ staff as quick to punish transgressions but unaccountable for their own errors. Nor will they volunteer information about participants’ entitlements. ‘If you don’t ask, you won’t get it,’ one participant told the project.

“Clients are reprimanded, for example if they are late for appointments, don’t produce the necessary documentation, or seek autonomy (in purchases). Conversely, WINZ staff can keep clients waiting for hours beyond their appointment times.”

State agencies, he says, are increasingly operated as agencies of repression rather than care. “This lack of care perpetuates inequities and discrimination, transforming settings for daily family life into a landscape of despair. We need to transform that into a landscape of care.”

• Read more about the project.

And from some of the conference tweeters who were reporting on the session: 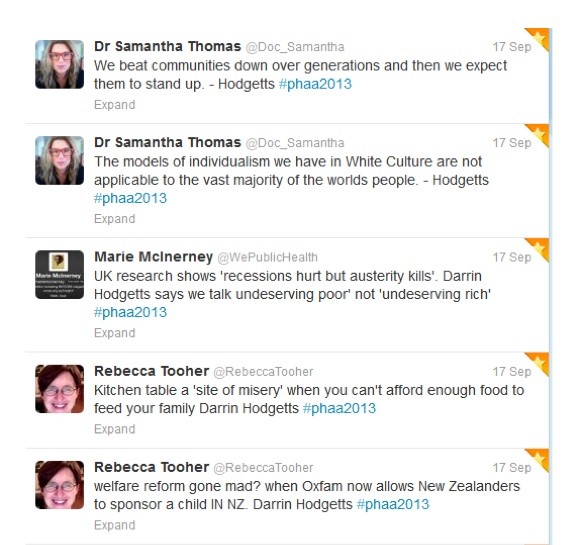 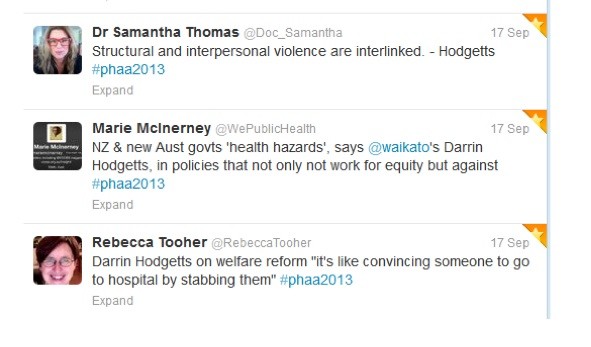