A local council takes on fast food: is this the future for improving public health?

In case you missed it, there has been an interesting development for public health at Darebin in northern Melbourne – the local council is reportedly considering hiking rates for fast food chains. 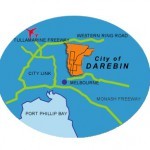 It’s part of a wider move in Victoria to improve public health through local government.

In the article below, Jane Martin, Executive Manager of the Obesity Policy Coalition, says local councils are ideally placed to make a difference to their communities’ health.

(And on related topics, there is a new HBO series, The Weight of the Nation – I haven’t had a chance to watch it yet but would be interested to hear from anyone who has.)

Victorian councils, who are being funded to address overweight and obesity, are exploring new ways to shape disincentives around the placement and operation of chain fast food outlets.

Darebin Council recently announced that they were looking at increasing the rates on chain outlets in their community, recognising the impact on the health and diets of the community. The funds raised will go into health promotion to try to reduce the rates of chronic disease in the community.

Darebin Council has high rates of overweight and obesity, with more than half of males and more than a third of females overweight or obese in 2008.

There are also low numbers of people in Darebin meeting the daily requirements for vegetable consumption. This is giving rise to huge problems with the associated chronic disease, particularly diabetes, the prevalence of which has doubled in the last ten years.

These chains are different to the local fish and chip shops and other food outlets in three ways. Firstly, they sell huge volumes of food with 44% of foods eaten out of home bought from fast food outlets. Further, a study published last month looking at sales at a number of McDonalds found that only 1% of sales were for the healthier options.

Finally, because of the volume of sales they are able to sell their products very cheaply, undercutting local businesses and healthier options.

This issue is not just something that concerns local governments; recently in South Australia we have seen community backlash around the proposed placement of a McDonalds opposite a school.

This promises to be a David and Goliath fight, with parents and health experts attempting to fight the development on health grounds finding little support in planning legislation and battling one of the biggest fast food companies on the planet.

Councils are right to look at every option available to try and encourage and support their communities to eat more healthy food, eat less unhealthy food and make the healthy options the easy options.

PrevPreviousWhen will policy catch up with the science on drug prohibition?
NextIs the post-budget “class warfare” discussion helpful for public health?Next