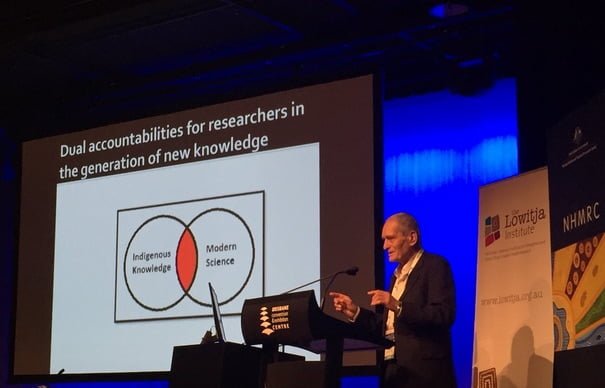 Health researchers who want to make a difference for Indigenous people must work at the interface of two knowledge systems – the Western biomedical/bioscience approach and Indigenous knowledge, according to a leading Maori researcher and health specialist.

Sir Mason Durie, one of Aotearoa New Zealand’s most highly respected health leaders, said that health systems and research also had to engage not only with education, housing and other sectors, but be part of legal, historic, land, demographic, economic and language research.

He said researchers must be driven by delivering solutions to communities, not defining their problems.

“They know what went wrong, what they want to know is how to get on a pathway that leads to flourishing community and flourishing families,” he told the 6th National Health and Medical Research Council (NHMRC) symposium on research translation last week.

Durie, a psychiatrist who was Deputy Vice-Chancellor and Professor of Māori Research and Development at Massey University in New Zealand until his retirement in 2012, delivered what one delegate described as “an impressive masterclass” to the symposium on Indigenous health translation, co-hosted with the Lowitja Institute.

His keynote address outlined Māori experience in translating health research into health gains, which he said had been shaped by four themes: 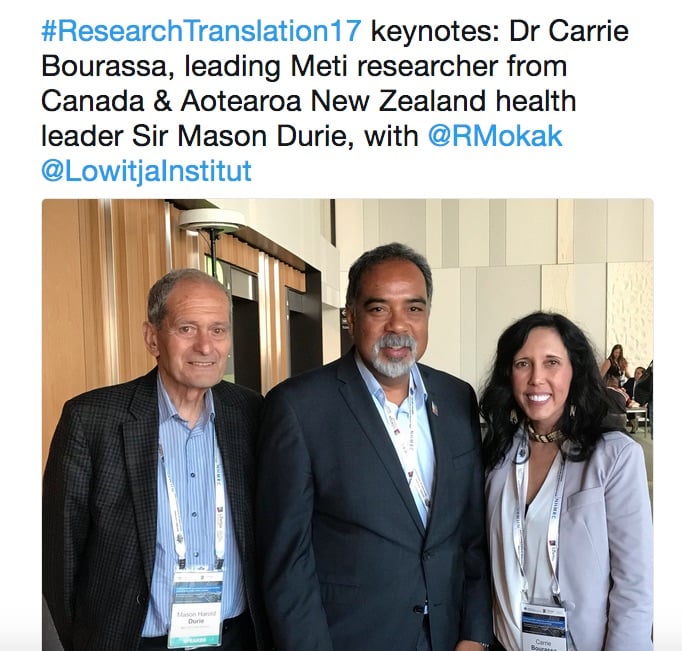 Researchers have two obligations if they are to make a difference to Māori people and thus more broadly for Indigenous people, he told delegates.

“There is an obligation to be part of a biomedical, bioscience approach, but also to be expert enough to know what underpins Māori knowledge.

“These are two bodies of knowledge which are different – you can’t explain one by using the arguments of the other.”

Durie defined Indigenous knowledge as generally tending to understand people “not by what goes on inside them but by how they relate to outside them”.

Biomedical knowledge, by contrast he said, tends to go in the other direction: “You understand things by analysing them, breaking them down into small bits, so you can work out what the DNA problem is.”

“Researchers who are going to make a difference to Māori need to be somewhere in the middle of that… to be conversant with both.”

Durie said that much research in the past had been very good at finding out “why things went wrong” but has paid less attention to what went right.

“The solution focus is really what communities are looking for,” he said.

“What’s come through at this conference is that people are not defining themselves by deficits and disparities but by the progress they’ve made, by the potential they have and by the promise of their own work,” he later told Croakey (see the video interview below). 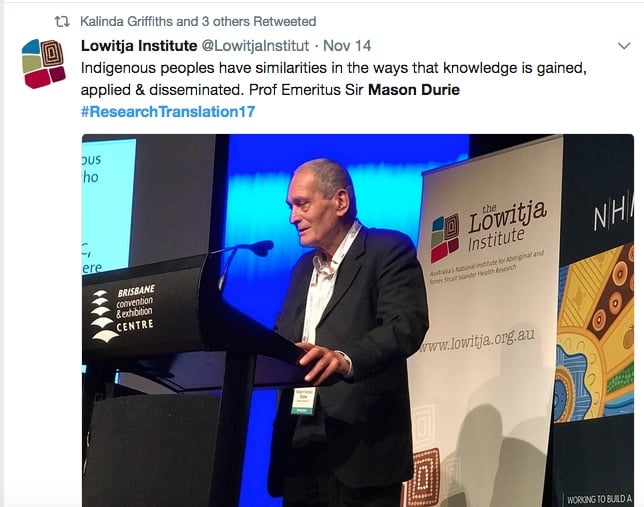 In his wide-ranging plenary address, Durie outlined a number of case studies that he has been involved in over many decades to illustrate research impact.

Their key themes, he said, were that they:

One of the most recent examples was Te Reo Hāpai – “The Language of Enrichment”, a project to update and create Māori language used in the mental health, addiction and disability sectors and published this year as a language glossary for Māori services across New Zealand.

It emerged, he said, out of concern that many of the terms used in mental health services and diagnostic categories “are often confusing, are often misleading, sometimes unintelligible, and often degrading”.

The new lexicon includes over 200 Māori words, terms and proverbs developed over two years of consultation with people with lived experience of mental health, addictions and disability issues, as well as with practitioners, clinicians and not for profit services.

Durie said Te Reo Hāpai is important for the way it uses Māori words – illustrating the capacity of one language to unlock complex descriptions used in another to better convey meaning and understanding – but also because it uses terms that don’t devalue people.

He says in the preface of the publication that it will increase knowledge and appreciation of mental health especially for those for whom Māori is a preferred language, and greatly increase understanding of mental health conditions, symptoms and consequences and in the process will lead to better engagement between whānau (family) and health services.

This vocabulary is especially welcome because it translates words that might carry stigma and discrimination into words that recognise humanity, hope and personal dignity.

Patients and ‘service users’ become people again – tāngata whai ora; people with disabilities become tāngata whaikaha with an emphasis on gaining strength and ability; the somatic effects of anxiety such as palpitations – often the most worrying symptoms – are recognised in the word manawapā.

In effect the language of mental health becomes more aligned to the people most concerned rather than to those who provide treatment and care.”

He also described the Whānau Ora (well families) project, which arose out of concern that service delivery to Māori whanau (families) was “fragmented, poorly coordinated, provider oriented, and short sighted”, with most offering crisis resolution and nothing beyond.

You might have the truancy officer, diabetes nurse, corrections officer and the housing people all parking their cars up the (one) driveway, not talking to each other and missing the main point.

The project, which had a strong research component, has led to Whānau Ora, which describes itself as “a revolutionary public sector initiative” that devolves the delivery of services to community-based commissioning agencies.

It has a dedicated Cabinet Minister and the heads of three key government departments – Health, Social Welfare and Māori Affairs – sit on its governance board (alongside Māori community representatives), with Housing and Education considering still whether to join.

Services have come together, forming 35 collectives instead of 225 individual services.

Durie said there was still much to be done to integrate sectors and government departments – “no Minister likes to share their boat with others” – but he highlighted how outcomes were assessed based on individual plans that each whaunau (family) was encouraged to make, whether it be to get a child back into school or to settle land issues.

So the results are not measured on how many people (services) were involved but the gains made by the family.

Critical to this are the whanau navigators, who can broker, mediate, be champions for whanau but all the time transferring their skills to whaunu members to provide their own leadership.

That gives much more flexibility and greater ability to focus on the needs of a particular community, a particular family than having a blanket prescription that covers everyone.”

Another case study detailed the development of the Hua Oranga tool to measure better Māori mental health service outcomes, amid concern that early measurements were capturing “the absence of symptoms” rather than any real notion of wellbeing. 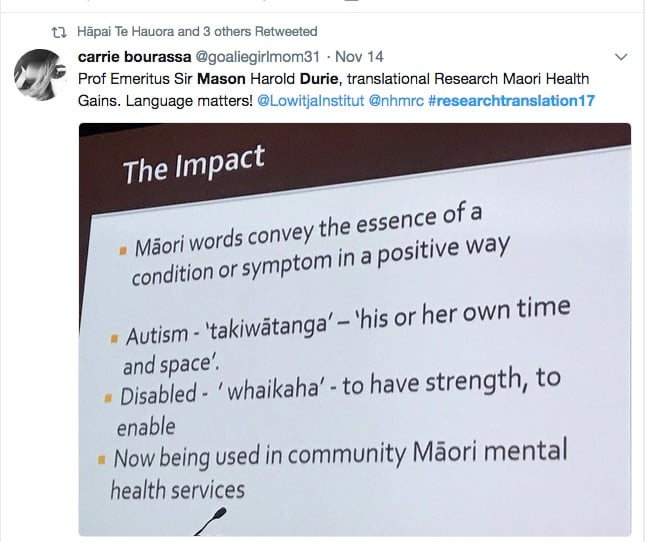 Following his address, a delegate asked for advice on how to overcome resistance in Australian governments to incorporating Indigenous ways and knowledge.

Durie said Māori people had been fortunate to have strong champions in Parliament and all eyes were now on the seven Māori Ministers – a record number ­– who are part of the new Labour Government.

It also helps, he said, “if you’ve got voting power”. Māori make up 15 per cent of the New Zealand population, and the population is young, so that power will only increase.

And the power of protest was also important, he said, recalling the leadership of Dame Whina Cooper, founding president of the Māori Women’s Welfare League, who “scared every politician she met”.

As an 80-year-old, she led the famous 1975 land march from far north New Zealand to Wellington, protesting further losses of Māori land.

Look beyond the health sector

A final message was that health services and research have to be integrated, within themselves – primary, secondary, and mental health – and with broader sectors and interests.

Most of the health issues that people face don’t depend on the health system, but on a whole range of interventions and policies, he said.

For Māori people, health is part of a wider socio-economic, environmental, and cultural advancement agenda, so a health research team might need to work alongside other Māori research teams or be part of another project involving:

“Health has got to be part of an intersectoral research program rather than expecting that health research by itself can fix the problem or develop pathways to success,” he said.

“The impacts of Māori health research have got to be felt beyond the health sector.” 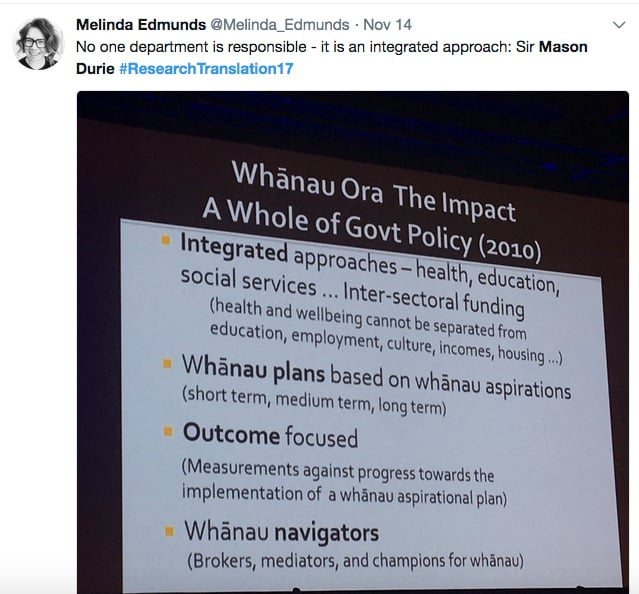 Summer May Finlay speaks with Sir Mason Durie at #ResearchTranslation17 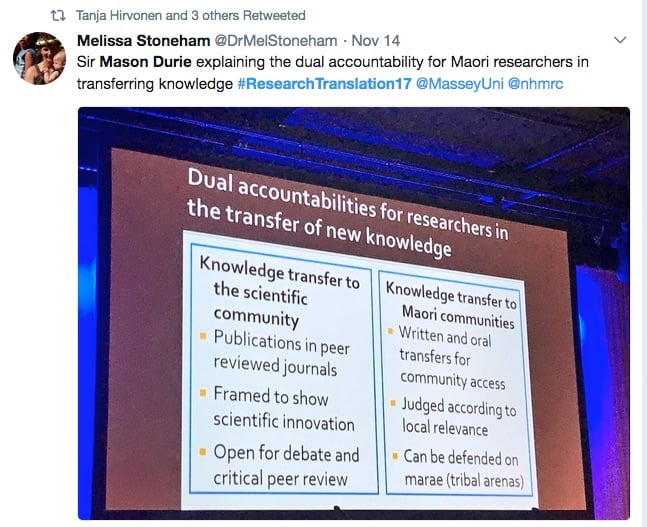 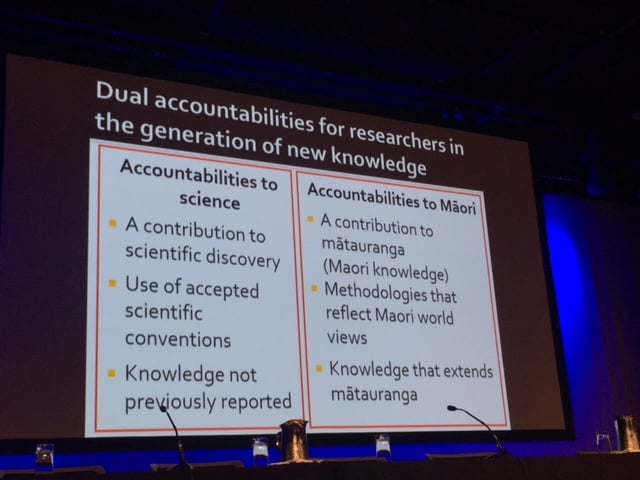 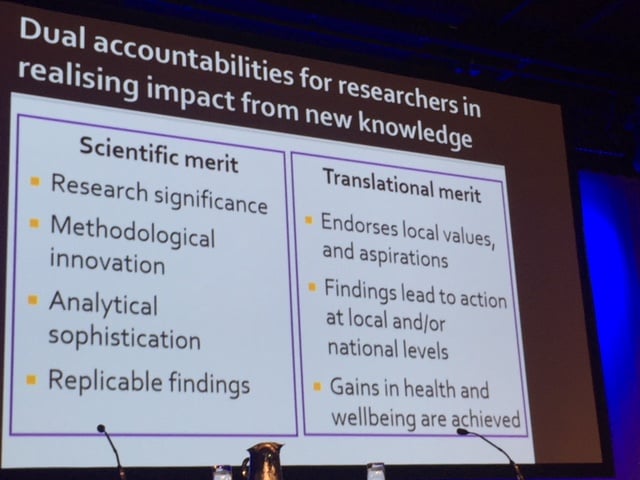 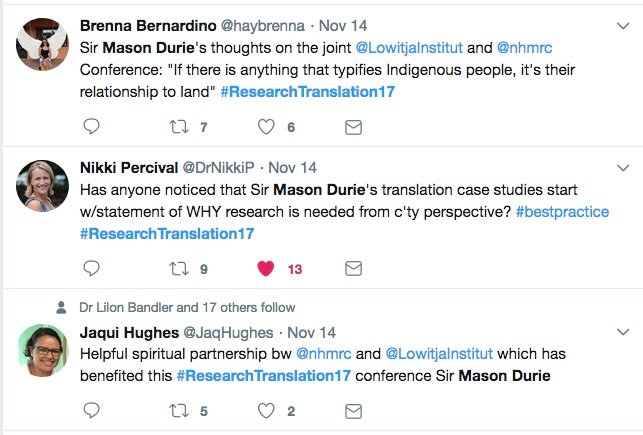 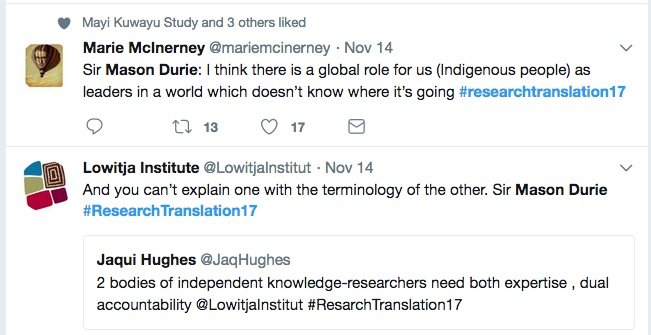 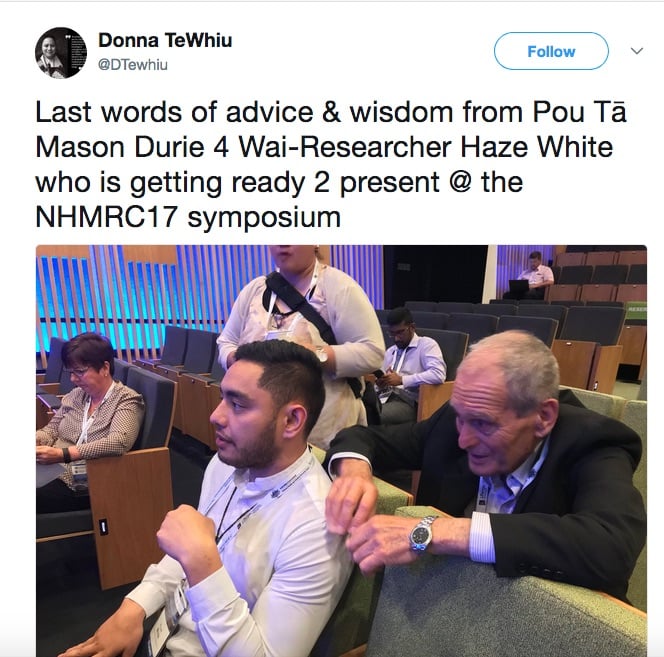