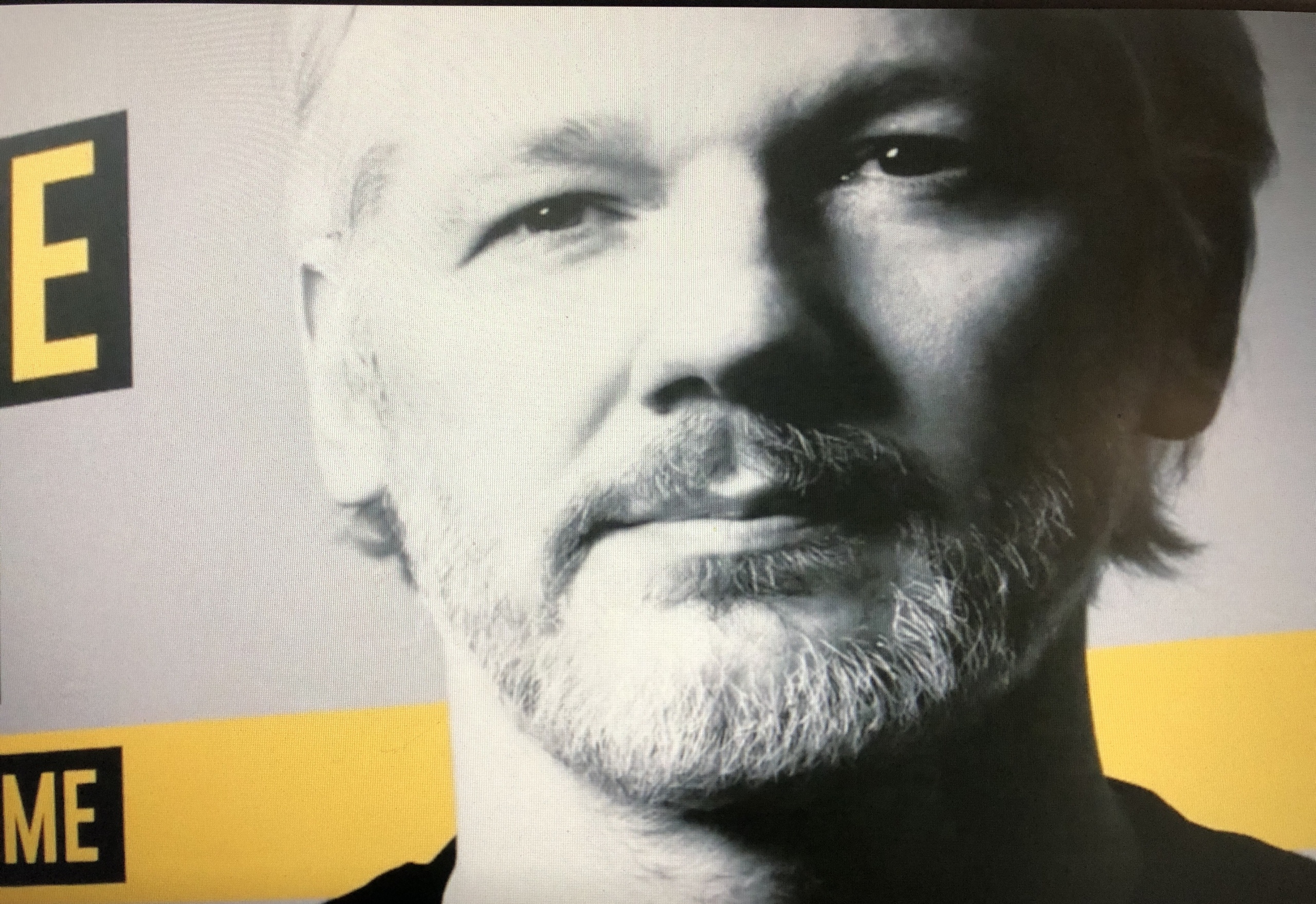 A billboard in the UK calling for Julian Assange's release. Image from Ithaka documentary.

A new book argues Julian Assange is being tortured. Will our new PM do anything about it?

Introduction by Croakey: The Albanese Government must act urgently if it is to stop the extradition of Wikileaks founder Julian Assange to the United States, as UK Home Secretary Priti Patel has until the middle of this month to decide whether to sign off on the extradition, according to lawyer Greg Barns.

Assange, who has received prestigious journalism awards and been recognised by the Sydney Peace Foundation, faces more than 170 years in a US prison for revealing US war crimes in Iraq and Afghanistan, Barns writes at Michael West Media.

“Assange’s case is an attack on freedom of speech. It also represents a dangerous development for citizens, journalists and publishers around the world because the United States is using its domestic laws to snare an individual who has no connection to the jurisdiction,” Barns says.

A new book by the United Nations Special Rapporteur on Torture, Nils Melzer, asserts that the US, the United Kingdom, Sweden and Australia have been part of a carefully orchestrated plan to ensure Assange is punished forever for revealing state secrets. The book, The Trial of Julian Assange: A Story of Persecution, says Assange has been subjected to torture.

Melzer also appears in an award-winning documentary currently showing on ABC TV and ABCiview, Ithaka: A fight to free Julian Assange, which traces a long campaign by Assange’s father, John Shipton, for his son’s freedom and safety. Also appearing are Assange’s partner Stella Moris, a lawyer, and their two young children, Gabriel and Max.

Writing for ABC, Moris says that Assange, who is in Belmarsh Prison, will turn 51 on 3 July, and that it “will be the fourth year he has spent his birthday alone in a cell, without conviction”.

“In October, he suffered a mini stroke,” she says. “There is only so much more his body can take. We wish the Australian Government would do more to assist Julian in this fight for his life.”

Below, journalist and academic Professor Matthew Ricketson gives an overview of Melzer’s new book in an article first published at The Conversation.

It is easy to forget why Julian Assange has been on trial in England for, well, seemingly forever.

Didn’t he allegedly sexually assault two women in Sweden? Isn’t that why he holed up for years in the Ecuadorian embassy in London to avoid facing charges? When the bobbies finally dragged him out of the embassy, didn’t his dishevelled appearance confirm all those stories about his lousy personal hygiene?

Didn’t he persuade Chelsea (formerly Bradley) Manning to hack into the United States military’s computers to reveal national security matters that endangered the lives of American soldiers and intelligence agents? He says he is a journalist, but hasn’t the New York Times made it clear he is just a “source” and not a publisher entitled to first amendment protection?

If you answered yes to any or all of these questions, you are not alone. But the answers are actually no. At very least, it’s more complicated than that.

To take one example, the reason Assange was dishevelled was that staff in the Ecuadorian embassy had confiscated his shaving gear three months before to ensure his appearance matched his stereotype when the arrest took place.

That is one of the findings of the United Nations Special Rapporteur on Torture, Nils Melzer, whose investigation of the case against Assange has been laid out in forensic detail in The Trial of Julian Assange.

What is the UN’s Special Rapporteur on Torture doing investigating the Assange case, you might ask? So did Melzer when Assange’s lawyers first approached him in 2018:

I had more important things to do: I had to take care of “real” torture victims!”

Melzer returned to a report he was writing about overcoming prejudice and self-deception when dealing with official corruption. “Not until a few months later,” he writes, “would I realise the striking irony of this situation.”

The 47 members of the UN Human Rights Council directly appoint special rapporteurs on torture. The position is unpaid – Melzer earns his living as a professor of international law – but they have diplomatic immunity and operate largely outside the UN’s hierarchies.

Among the many pleas for his attention, Melzer’s small office chooses between 100 and 200 each year to officially investigate. His conclusions and recommendations are not binding on states. He bleakly notes that in barely 10% of cases does he receive full co-operation from states and an adequate resolution.

He received nothing like full cooperation in investigating Assange’s case. He gathered around 10,000 pages of procedural files, but a lot of them came from leaks to journalists or from freedom-of-information requests. Many pages had been redacted. Rephrasing Carl Von Clausewitz’s maxim, Melzer wrote his book as “the continuation of diplomacy by other means”.

What he finds is stark and disturbing:

The Assange case is the story of a man who is being persecuted and abused for exposing the dirty secrets of the powerful, including war crimes, torture and corruption. It is a story of deliberate judicial arbitrariness in Western democracies that are otherwise keen to present themselves as exemplary in the area of human rights.

It is the story of wilful collusion by intelligence services behind the back of national parliaments and the general public. It is a story of manipulated and manipulative reporting in the mainstream media for the purpose of deliberately isolating, demonizing, and destroying a particular individual. It is the story of a man who has been scapegoated by all of us for our own societal failures to address government corruption and state-sanctioned crimes.” 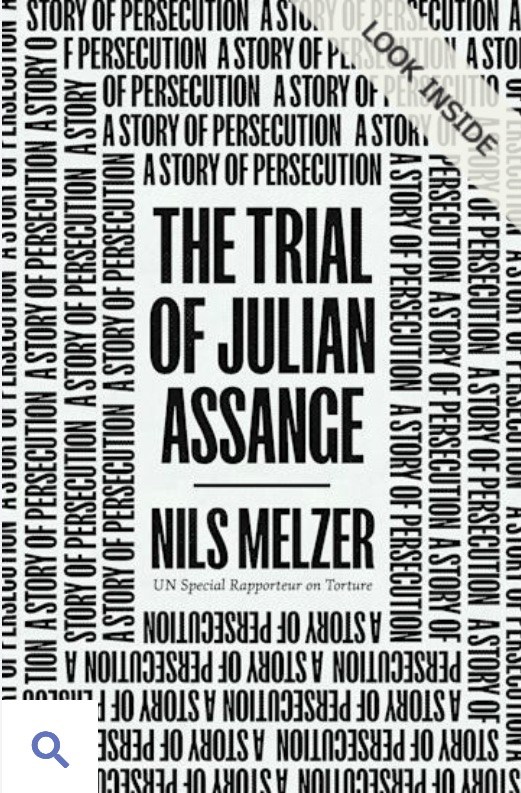 The dirty secrets of the powerful are difficult to face, which is why we – and I don’t exclude myself – swallow neatly packaged slurs and diversions of the kind listed at the beginning of this article.

Melzer rightly takes us back to April 2010, four years after the Australian-born Assange had founded WikiLeaks, a small organisation set up to publish official documents that it had received, encrypted so as to protect whistle-blowers from official retribution. Assange released video footage showing in horrifying detail how US soldiers in a helicopter had shot and killed Iraqi civilians and two Reuters journalists in 2007.

Apart from how the soldiers spoke – “Hahaha, I hit them”, “Nice”, “Good shot” – it looks like most of the victims were civilians and that the journalists’ cameras were mistaken for rifles. When one of the wounded men tried to crawl to safety, the helicopter crew, instead of allowing their comrades on the ground to take him prisoner, as required by the rules of war, seek permission to shoot him again.

As Melzer’s detailed description makes clear, the soldiers knew what they were doing:

“Come on, buddy,” the gunner comments, aiming the crosshairs at his helpless target. “All you gotta do is pick up a weapon.”

The soldiers’ request for authorisation to shoot is given. When the wounded man is carried to a nearby minibus, it is shot to pieces with the helicopter’s 30mm gun. The driver and two other rescuers are killed instantly. The driver’s two young children inside are seriously wounded.

US army command investigated the matter, concluding that the soldiers acted in accordance with the rules of war, even though they had not. Equally to the point, writes Melzer, the public would never have known a war crime had been committed without the release of what Assange called the “Collateral Murder” video.

The video footage was just one of hundreds of thousands of documents that WikiLeaks released last year in tranches known as the Afghan war logs, the Iraq war logs, and cablegate. They revealed numerous alleged war crimes and provided the raw material for a shadow history of the disastrous wars waged by the US and its allies, including Australia, in Aghanistan and Iraq.

Melzer retraces what has happened to Assange since then, from the accusations of sexual assault in Sweden to Assange taking refuge in the Ecuadorian embassy in London in an attempt to avoid the possibility of extradition to the US if he returned to Sweden. His refuge led to him being jailed in the United Kingdom for breaching his bail conditions.

Sweden eventually dropped the sexual assault charges, but the US government ramped up its request to extradite Assange. He faces charges under the 1917 Espionage Act, which, if successful, could lead to a jail term of 175 years.

The first is that there has been a carefully orchestrated plan by four countries – the United States, the United Kingdom, Sweden and, yes, Australia – to ensure Assange is punished forever for revealing state secrets.

The second is that the conditions he has been subjected to, and will continue to be subjected to if the US’s extradition request is granted, have amounted to torture.

On the first point, how else are we to interpret the continual twists and turns over nearly a decade in the official positions taken by Sweden and the UK? Contrary to the obfuscating language of official communiques, all of these have closed down Assange’s options and denied him due process.

Melzer documents the thinness of the Swedish authorities’ case for charging Assange with sexual assault. That did not prevent them from keeping it open for many years. Nor was Assange as uncooperative with police as has been suggested. Swedish police kept changing their minds about where and whether to formally interview Assange because they knew the evidence was weak.

Melzer also takes pains to show how Swedish police also overrode the interests of the two women who had made the complaints against Assange.

It is distressing to read the conditions Assange has endured over several years. A change in the political leadership of Ecuador led to a change in his living conditions in the embassy, from cramped but bearable to virtual imprisonment.

Since being taken from the embassy to Belmarsh prison in 2019, Assange has spent much of his time in solitary confinement for 22 or 23 hours a day. He has been denied all but the most limited access to his legal team, let alone family and friends. He was kept in a glass cage during his seemingly interminable extradition hearing, appeals over which could continue for several years more years, according to Melzer.

Assange’s physical and mental health have suffered to the point where he has been put on suicide watch. Again, that seems to be the point, as Melzer writes:

The primary purpose of persecuting Assange is not – and never has been – to punish him personally, but to establish a generic precedent with a global deterrent effect on other journalist, publicists and activists.

So will the new Australian prime minister, Anthony Albanese, do any more than his three Coalition and two Labor predecessors to advocate for the interests of an Australian citizen?

In December 2021, Guardian Australia reported Albanese saying he did “not see what purpose is served by the ongoing pursuit of Mr Assange” and that “enough is enough”. Since being sworn in as prime minister, he has kept his cards close to his chest.

The actions of his predecessors suggest he won’t, even though Albanese has already said on several occasions since being elected that he wants to do politics differently.

Melzer, among others, would remind him of the words of former US president Jimmy Carter, who, contrary to other presidents, said he did not deplore the WikiLeaks revelations.

They just made public what was the truth. Most often, the revelation of truth, even if it’s unpleasant, is beneficial. […] I think that, almost invariably, the secrecy is designed to conceal improper activities.

• Matthew Ricketson is Professor of Communication at Deakin University 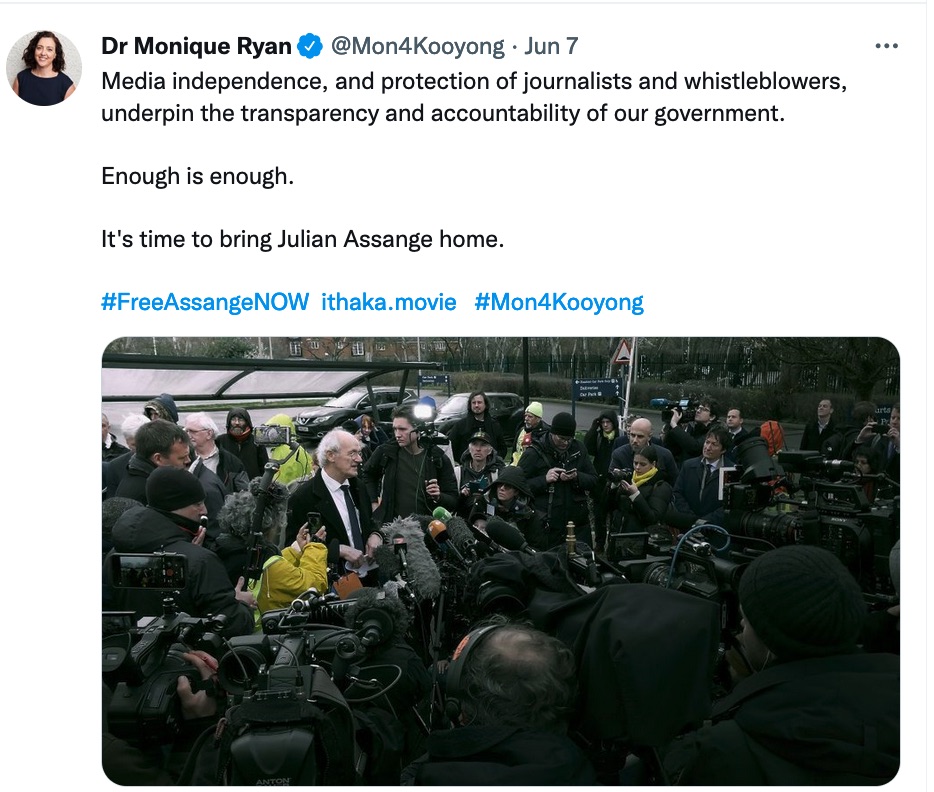 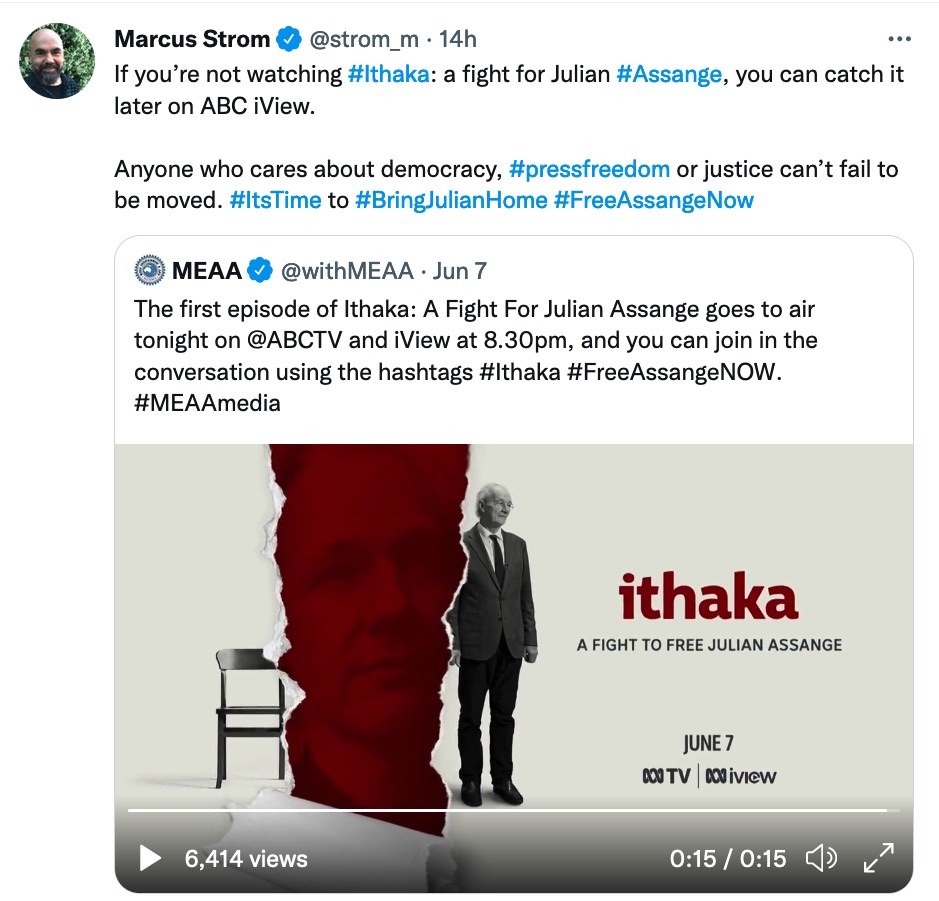 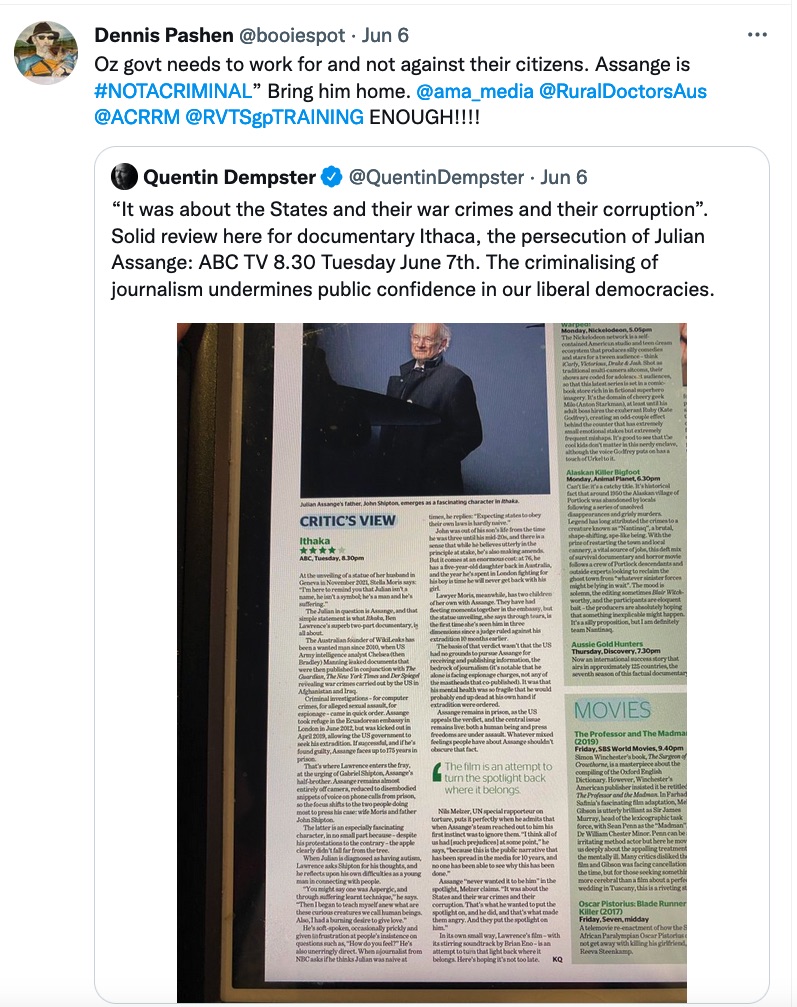 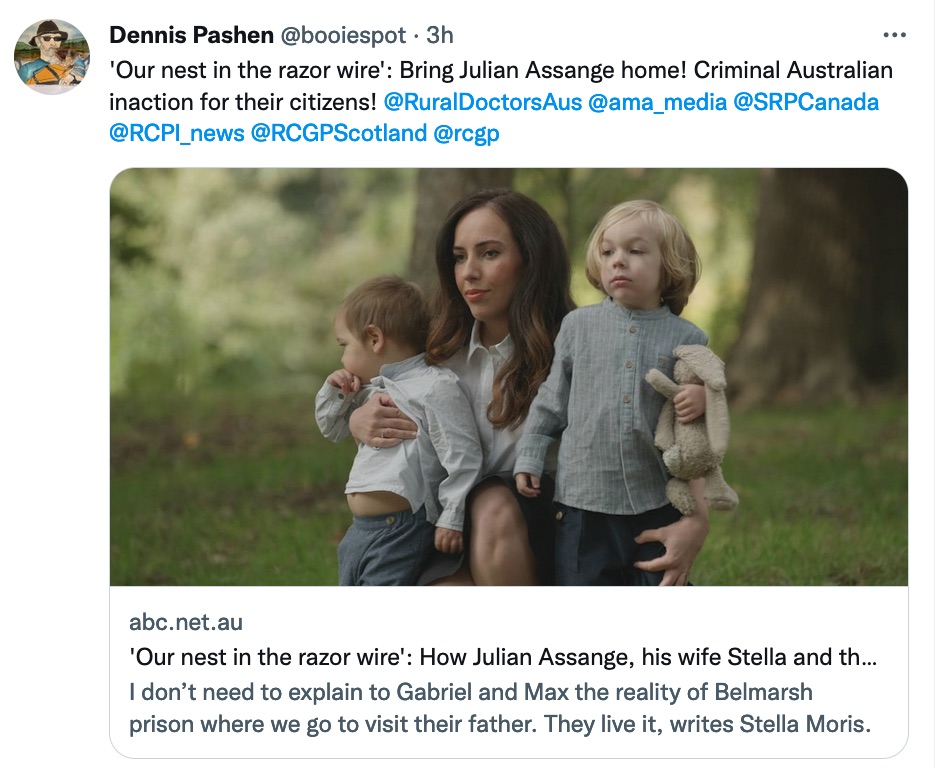 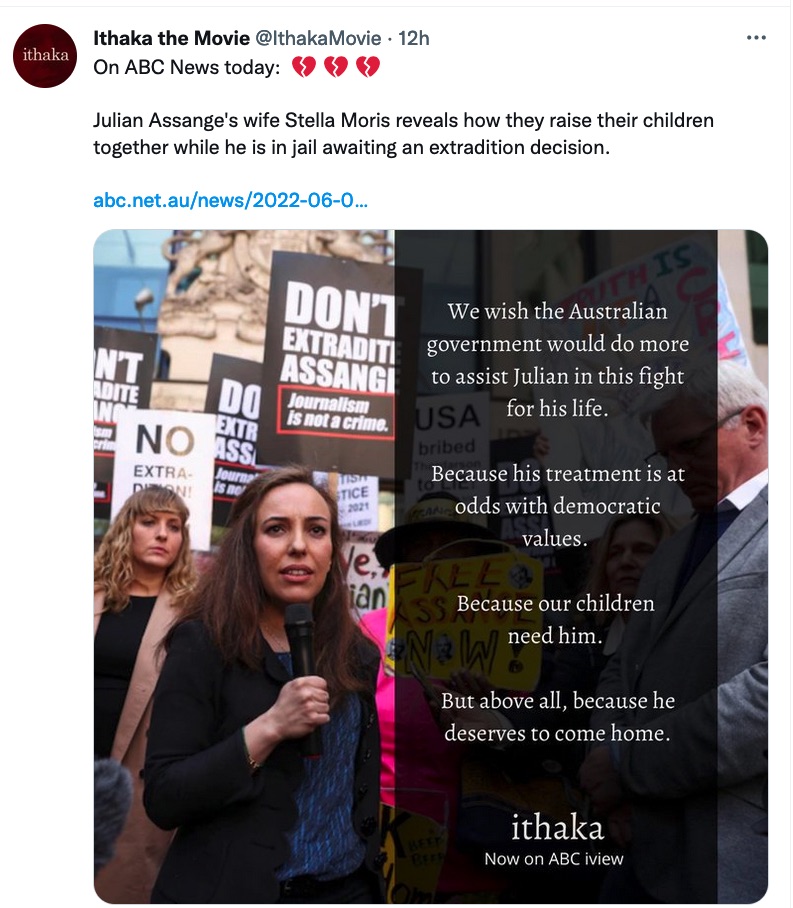