A new health book that is worth reading (and free online)

If you haven’t already caught up with it, I commend the new edition of Testing Treatments: Better research for better healthcare. The English science writer Ben Goldacre calls it a book that “should be in every school, and every medical waiting room”.

It is freely available online and is in the process of being translated into multiple languages.

The book recounts many of the salutary lessons of modern health care – featuring the stories of Vioxx, Avandia, HRT, and herceptin, amongst others – and includes suggestions for how general readers can help to improve the quality of information guiding healthcare decisions.

In the article below, one of the authors, Hazel Thornton, a patient and independent lay advocate for quality in research and healthcare, from Colchester in the UK, describes the book’s history. (The next Croakey post will cover the book’s recommendations on medical research).

The story of Testing Treatments

Another exciting chapter has just been added to the history of Testing Treatments: better research for better healthcare – the second edition of this successful book was officially launched in London by the publisher last month.

Testing Treatments is written for the public – it urges everyone to get involved in improving current research and future treatments and explains how they can do this. Or as Ben Goldacre of Bad Science puts it in his Foreword:

“Medicine shouldn`t be about authority, and the most important question anyone can ask on any claim is simple: `how do you know?` This book is about the answer to this question.”

So what is the story behind Testing Treatments, and how did I, a breast cancer patient and Independent Citizen Advocate for Quality in Research and Healthcare, become involved?

Testing Treatments was first published by the British Library in 2006 (reprinted by Pinter and Martin in 2010).  Imogen Evans, a medical doctor, had been commissioned by the British Library to write a book for the public on a topic of her choice. She chose a subject that had interested and vexed her for years in equal measure: how to ensure that research into medical treatments best meets the needs of patients. She invited two people to work with her on this exciting undertaking: Iain Chalmers, a former health services researcher who now promotes better controlled trials for better healthcare through the James Lind Initiative based in Oxford and me.

My very first encounter with Imogen had been over a decade earlier, in November 1991, when she was then an editor at The Lancet. She wrote me a letter accepting a very personal piece I had written – Breast cancer trials: a patient`s viewpoint. (Lancet 1992; vol.339;44-45).

You may imagine my delight at the prospect of being invited to work with Imogen and Iain on Testing Treatments. It ‘fitted’ perfectly with my own objective. Since my abrupt confrontation with a request to join a trial I had been intent on the need for citizens to be educated about research. This was the perfect opportunity to reach a wide public, enhanced by the combination of talents that we three could bring.

Our guiding principle in writing Testing Treatments was to promote more critical public assessment of the effects of treatments by encouraging patient-professional dialogues. We wanted to share our enthusiasm for the topic by writing an honest book that did not preach to readers.

Researching our source material re-emphasised to us the importance of reliable evidence about treatment effects and the dangers of relying on recollections – our memories were sometimes faulty too. Along the way we were greatly encouraged by the reactions of colleagues and friends, who gave their time generously, tracked down material, caused us to think and re-think many times over, and read and commented on drafts of the book.

From the outset, we thought of Testing Treatments as ‘work in progress’. There will almost always be uncertainties surrounding the effects of treatments, both new and old, so there is a constant need to ensure that all treatments are tested properly; and to visit and re-visit the evidence.

So, in order to build on the success of the first edition of Testing Treatments, we knew that it was time to extensively revise and update our book.

This time we were joined by Paul Glasziou from Bond University, a GP and researcher with a commitment to taking account of high quality research evidence in everyday clinical practice.

This Second Edition includes a thought-provoking chapter on screening, explaining why early diagnosis is not always better. Other new chapters explore how over-regulation of research can work against the best interests of patients, and how robust evidence from research can be drawn together to shape the practice of healthcare in ways that allow treatment decisions to be reached jointly by patients and clinicians.

Testing Treatments is short and easily navigable, and, although I say it myself, feels good in the hand.

It has a clear Contents page; a chapter-by-chapter Reference section at the end of the book; an organized Additional resources section; a List of Vignettes section, listing the vivid accounts that are used throughout the book to highlight real world examples; and a List of Key Point, chapter-by-chapter, of key points used to summarise content at the foot of each chapter. There is also a comprehensive Index.

The penultimate chapter ends with a reproduction of the Salzburg statement on shared decision-making.

The final chapter ends (on page 168) with An Action Plan – Things you can do, outlining practical steps that patients and doctors can take together – starting now! 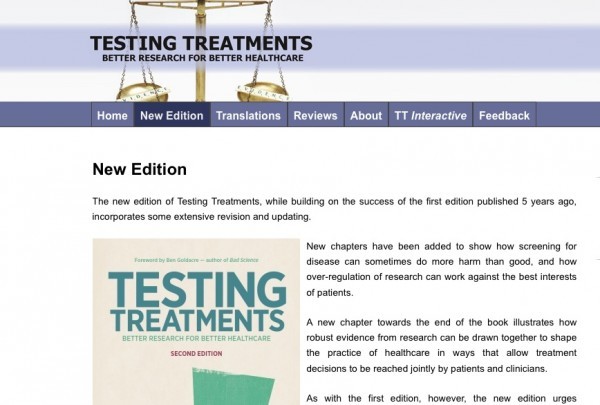 • Acknowledgement: My thanks, as ever, go to Imogen for `Imogenising` this account and checking the details.

• Stay tuned for more at Croakey on related themes.

PrevPreviousWhy Mary, Kylie and I may prefer to be known as Doctor….
NextSome suggestions for the national and NSW reviews of health and medical researchNext