Home Public health and population health public health A new publication on immunisation, with an overview from Sir Gus Nossal and others

A new publication on immunisation, with an overview from Sir Gus Nossal and others

The Australian Academy of Science has launched a publication, The Science of Immunisation, Questions and Answers, which aims to “address confusion created by contradictory information in the public domain” and to “explain the current situation in immunisation science, including where there is consensus in the scientific community and where uncertainties exist”.

In the article below, Sir Gus Nossal, who chaired the group that reviewed the publication, gives an overview of the recent history of immunisation successes.

The risk-benefit equation is overwhelmingly in favour of vaccination

The anti-vaccination lobby is wrong, dead wrong. The truth is that vaccines are undoubtedly history’s most cost-effective public health tool.

As the saying goes, prevention is better than cure and vaccination proves that in spades. In industrialized countries we have virtually vanquished most epidemic diseases and it’s largely due to vaccines.

What is particularly ironic is that resistance to childhood vaccination is largely a phenomenon of developed nations. Those who lobby against it are able to do so because of the very success of vaccination.

Because we don’t have diphtheria epidemics, because whooping cough epidemics are rare, because we don’t see tetanus and smallpox any more Australians don’t have first hand experience of how devastating such diseases can be. That means the alleged side effects of vaccines may seem more frightening than the diseases they prevent.

It is true that side effects do exist but they are generally trivial.  It is also true that serious side effects happen but they are vanishingly rare, occurring in only about one in a million vaccinations. Moreover, public health surveillance can catch problems such as the unacceptably high rate of febrile convulsions in children under age 5 who received one type of the 2010 influenza vaccine.  It was quickly withdrawn for children under 5 and was replaced by other vaccines for that age group.

While unacceptable, this was not a legitimate excuse to lobby against universal vaccination. Despite claims to the contrary, the risk-benefit equation is overwhelmingly in favour of vaccination.  Consider the relatively common symptoms of pertussis: paroxysmal cough followed by whooping (hence the common name of “whooping cough”), apnoea, pneumonia and occasionally, seizures and encephalopathy.

As recently as the 1980s, extra wards were opened in children’s and infectious diseases hospitals in Australia every two to three years to cope with regular epidemics of measles during which many children died from associated illnesses such as encephalitis and pneumonia. Measles can also cause lifelong disability, including deafness, blindness and mental disability.

When vaccination against measles, whooping cough, polio, tetanus and diphtheria was introduced to Australia the incidence of the diseases dropped precipitously to, in many cases, virtually zero.

It is clear the anti-vaccination lobby is a serious thorn in the flesh of public health. For instance, it played a major role in the outbreak of measles, mumps and rubella in the UK. Thanks to the efforts of a brilliant public health expert by the name of David Salisbury who effectively publicized the importance of immunizing children with the measles, mumps and rubella (MMR) vaccine, Britain was on the very threshold of eradicating measles from the UK. Then along came one researcher with a totally fallacious claim the vaccine causes autism.

It took nine independent studies over several years to dispel public doubt and counter the baseless but fearful assertions being peddled as a result of this single, fraudulent paper by the anti-vaccination lobby.

It turns out the incidence of autism in people who had the MMR vaccine is identical to that of people who did not have it. But the anti-vaccination lobby startled parents so much the vaccination rate, which was up to 92-93 per cent, plummeted to 60-70 per cent in different parts of the UK. What was the end result? Outbreaks of all three diseases, which are not yet under control.

That is a terrible tragedy triggered by ignorance. Measles, mumps and rubella are preventable diseases. To help parents understand the importance of getting their kids vaccinated, the Australian Academy of Science has prepared a booklet —The Science of Immunisation: Questions and Answers – which explains the basics of vaccination.

Very simply, vaccines work by stimulating the body’s natural defence system, the immune system.  When you get an infection or a vaccination – the process is similar — the white cells of the blood have the capacity to divide and fabricate precious disease-fighting molecules called antibodies. The antibodies are fashioned to exactly fit onto key molecules of the pathogen, the infections microorganism, which is then neutralised in a highly specific manner.

The beauty of immune system is its specificity. Measles vaccines act only against measles, polio only against polio. Antibodies are tailor-made to fit the particular bug.

This fundamental process is well known to science and well documented by epidemiologists and public health experts. Along with clean drinking water and public sanitation there is absolutely no doubt that vaccination dramatically reduces childhood illness and mortality.

My take-home advice for parents is pick up or download the Academy’s booklet, talk to your doctor and follow the Australian guidelines for what vaccines to give your infant and when to do so.

Remember you and your kids are benefiting from several decades of first-class research. Remember that the disease is far, far worse than vaccine side effects.

Because my family and I know vaccination is critical to the health of all Australians, every single one of my four children and nine grandchildren have been properly vaccinated.  ENDS.

• Sir Gus Nossal has been President of the International Union of Immunological Societies, Chairman of the committee overseeing the WHO’s Vaccines and Biological Program, and Chairman of the Strategic Advisory Council of the Bill and Melinda Gates Foundation Children’s Vaccine Program. 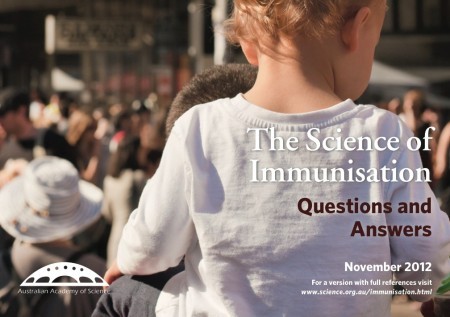 • At The Conversation, Professor Fiona Stanley says the history of myths about immunisation “demonstrate why it’s absolutely crucial that medical researchers obtain solid laboratory data about new and combination vaccines, test them rigorously and obtain very good surveillance and monitoring data. The public must have confidence that the research is done and done well.”

• At the publication’s launch, parents were encouraged to google “immunisation” rather than “vaccination” to increase their chances of finding reliable information online.