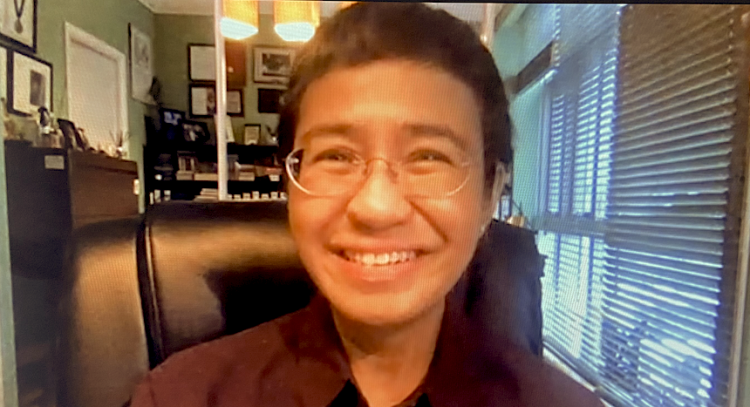 When the business models of some of the world’s most powerful companies benefit from the dissemination of lies and disinformation, what does this mean for democracy? Marie McInerney reports.

Internationally renowned journalist Maria Ressa has called for global action against Facebook and other digital platforms that allow lies to “spread faster and further than facts” — disinformation that is threatening journalists and journalism and putting democracy at grave risk.

In a keynote address to the online annual conference of the Journalism Education and Research Association of Australia (JERAA), Ressa said the defeat of US President Donald Trump would not put an end to the spread of fake news and its use by authoritarian leaders to control their critics and countries.

Ressa, a former CNN war correspondent and co-founder and CEO of acclaimed Philippine news service Rappler, has been a leading critic of Facebook’s role in supporting President Rodrigo Duterte’s murderous “war on drugs” in the Philippines and in spreading disinformation elsewhere globally.

“It doesn’t matter that US President-elect Biden won the election,” she said. “As long as the world’s largest distributor of news is biased against facts, we have a problem.”

Her comments come amid concerns about the Australian Government’s failure to tackle disinformation spread by the digital platforms, and warnings from the World Health Organization and other agencies on an infodemic that continues to undermine the global response to the COVID-19 pandemic.

Ressa said she had believed in Facebook as a tool for social good when it first emerged, but that potential remained just a dream, “because the data shows us right now that what spreads through Facebook (is) hate speech, disinformation and conspiracy theories”.

Lies “spread faster and further than the facts,” she said, warning of the ripple impact on democracy and citizenship in a world where citizens need to do “more than just vote”.

Ressa quoted Yale History Professor Tim Snyder, pictured above and the author of On Tyranny: Twenty Lessons from the Twentieth Century, saying he was speaking to the evidence of Rappler’s data and experience when he said:

If we don’t have access to facts, we can’t trust each other. Without trust, there’s no law, without law, there’s no democracy.

If you want to rip the heart out of a democracy directly, to go right out and kill it, you go after facts. That’s what modern authoritarians do.

Step one, you lie yourself all the time.

Step two, you say it’s your opponents and the journalists who lie.

Step three, everyone looks around and says what’s truth, there is no truth, then resistance is impossible and the game is over.”

Ressa is currently appealing her conviction in a “cyber libel” case that could see her sentenced to years in prison, following an arrest that has been widely criticised by the international community as the latest in a series of efforts to silence her criticism of the Duterte rule.

London-based Australian journalist and academic, Julie Posetti, the Global Director of Research at the International Center for Journalists, has written how Ressa has endured years of sustained harassment, which has been “effectively licensed” by Duterte and fueled by Facebook-facilitated disinformation networks. 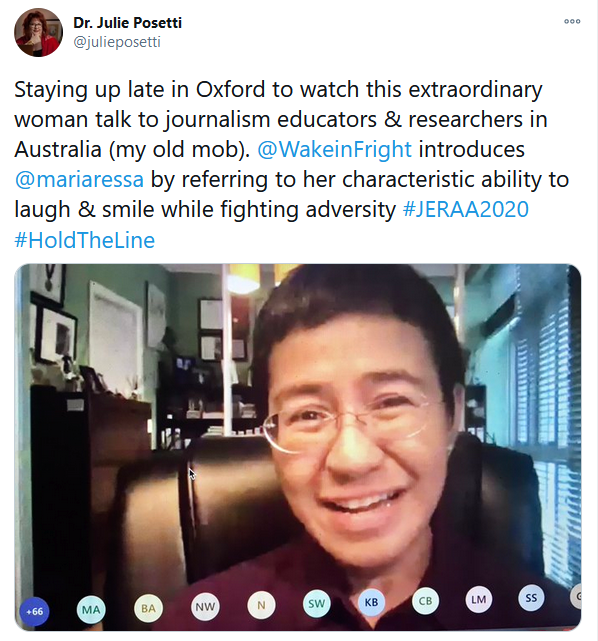 A giant in journalism

JERAA president, Dr Alex Wake, a senior lecturer at RMIT University in Melbourne, introduced Ressa to the conference as “a tiny woman who is a giant in journalism”, saying she has been honored around the world for her courageous and bold work in fighting disinformation and efforts to silence the free press, including as one of Time magazine’s 2018 Persons of the Year.

“She is a warrior of press freedom and we are grateful she has the time and has managed to stay out of jail to be with us today,” she told #JERAA2020 participants.

In a wide-ranging, 90-minute keynote and Q&A session, Ressa told the event that Rappler had been founded on three pillars – technology, journalism and community – and had in its early days embraced social media as an effective tool and platform before becoming one of its first major targets.

Rappler had challenged the impunity of two men, she said. One was Duterte, who had unleashed a brutal drug war on his own people. The second was Facebook’s Mark Zuckerberg.

She ascribed much blame for disinformation and discord on the design of the social media platforms.

For a long time, she said, journalists and news organisations had been gatekeepers, “responsible and liable for facts and liable for lies if they entered the public sphere”.

With the emergence of digital giants like Facebook and Google, journalists lost that gatekeeping power to the social media platforms that took the revenues but “abdicated the responsibility for protecting the public sphere”, she said. “If we want to stop the poison, we’ve got to look there.”

Leading journalists and human rights experts have said Ressa’s arrest last year on charges of cyber libel was “a retaliatory move” for exposing violence-inciting fake accounts on Facebook linked to Duterte’s administration and that it raises the question of the company’s culpability for her predicament because it failed to take them offline and protect her.

As part of a three-part series on Weaponizing the internet, Ressa and Rappler identified 26 fake accounts that reached more than three million Facebook users in mid-2016, and tracked how social media worked as an “insidious manipulation platform”, seeding allegations, distorted characterisations and other “propaganda techniques that have helped shift public opinion on key issues”.

“You say a lie a million times, it becomes a fact,” Ressa told the conference after detailing some of the vicious personal attacks she experienced, including getting an average of 90 hate messages per hour when the series was published.

Ressa describes the Philippines as the “first domino” that came tumbling around the world, amid the election of populist authoritarians who were able to use information to manipulate, and employ social media as a “behaviour modification system”.

Why the Philippines? Because 100 percent of its citizens who use digital technology used Facebook, she said, reporting a conversation she had with Cambridge Analytica whistle-blower Christopher Wylie in Sydney last year who said her country was used as a “petri dish” for tactics of digital manipulation which, if successful, were ‘ported’ to Western nations.

“So we are the guinea pigs, and you are the target,” she said.

While Ressa says Biden’s election alone won’t defeat disinformation, she was hopeful of pending regulation of digital platforms, and she continues to work to hold the tech giants to account.

Ressa is also a board member of the Forum on Information and Democracy, and co-chairs a steering committee which last month published a report with 250 recommendations on how to rein in infodemics that threaten democracies and human rights, including the right to health.

It urges that governance of our digital world “must be wrestled back from private companies and authoritarian states alike if democracy is to survive”.

On related matters, see this Twitter thread from an Australia Institute webinar this week about press freedom, authoritarianism, Julian Assange’s persecution and a new book, A Secret Australia. 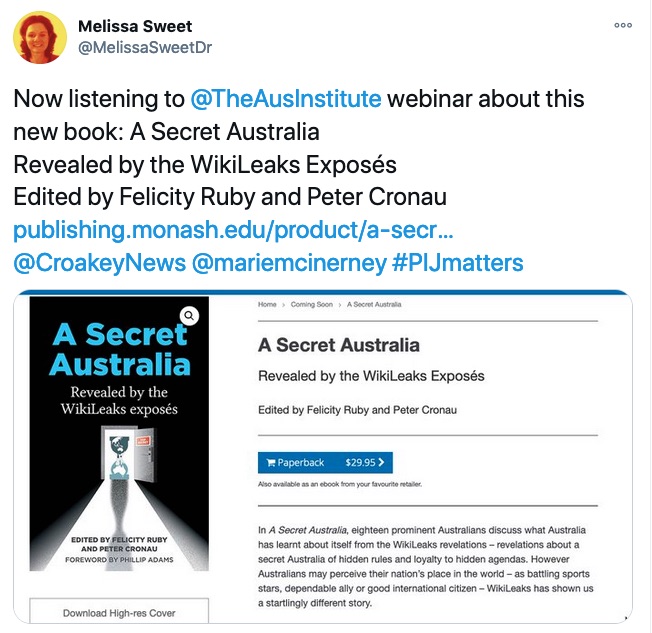 PrevPreviousAs Western Australia moves on climate and health concerns, national and global responses are under the spotlight
NextStrengths-based approaches and shared decision-making key to closing the gap: Productivity CommissionNext