One of the world’s best-read scientists on the topic of faeces – Canadian David Waltner-Toews – was a keynote speaker at a recent Eco-Health symposium in Melbourne.

Marie McInerney reports that Waltner-Toews, who has been internationally recognised for his contributions to ecosystem approaches to health, is adept at using humour to engage audiences in the serious subject of the need for some transformative thinking around excrement.

Full of cr*p: “the awesome, troubled, unexpurgated story of faeces” on our planet 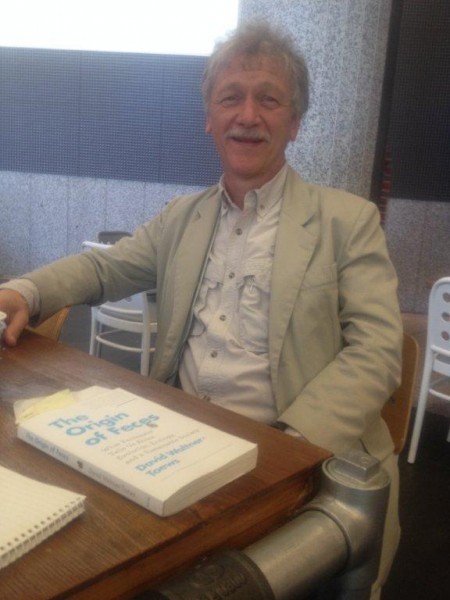 David Waltner-Toews was in Australia to talk sh*t.

And he has a lot of fun doing it. The Canadian author is a veterinarian, epidemiologist, and scientist whose 17 books to date include The chickens fight back: Pandemic panics and deadly diseases that jump from animals to people and Food, Sex and Salmonella: Why our food is making us sick.

His latest is The Origin of Faeces: What excrement tells us about evolution, ecology, and a sustainable society (though its title works slightly better with its Canadian spelling of ‘fecies’ – geddit?).

One of its chapters, which details how animals use faeces for communication, including about the presence of a potential mate, is titled ‘Turds of Endearment’.

“This isn’t in Bambi,” he laughs, “but the mother deer will eat the faeces of the newborn fawn so predators can’t smell it. I don’t know why Disney left that out of the film!”

The puns and asides are all ways to help win mainstream attention for a serious issue: what to do with the 14 billion tonnes or so of human and animal excrement produced each year.

“It’s a subject which people are queasy about,” Waltner-Toews says. “We don’t have a language that allows us to talk about it in reasonable, complex way. It’s either really technical, ‘we’re undertaking nutrient management of biosolids’ for agricultural engineers and urban sewage treatment plants or  kind of locker room style, ‘snicker snicker’.”

And the approach has worked. While most attention has still come from scientific media like National Geographic, the book’s had an airing in a range of more mainstream publications, including a financial newspaper in Israel, Canadian women’s fashion magazine (‘Does pooping in public make you squeamish?”) and a New York lifestyle magazine.

Waltner-Toews will also return to Australia next March to discuss the book as part of the 2014 Adelaide Writers’ Week.

And there is much to discuss, as the book’s blurb says:

The Origin of Feces (sic) takes an important subject out of locker-rooms, potty-training manuals, and bio-solids management boardrooms into the fresh air of everyone’s lives….Approaching the subject from a variety of perspectives — evolutionary, ecological, and cultural — (it) shows us how integral excrement is to biodiversity, agriculture, public health, food production and distribution, and global ecosystems. From the primordial ooze to dung beetles, from bug frass, cat scats, and flush toilets to global trade, pandemics, and energy, this is the awesome, troubled, unexpurgated story of feces.

Early in human culture and particularly in agricultural societies, he says, humans mimicked much animal behaviour when it came to using excrement as a resource. In South East Asia, cow pats were dried and burnt as fuel, while in the early 1700s, in Tokyo (then called Edo), homeowners and building owners sold their excrement to farmers. If there were fewer people living in an apartment, everyone’s rent went up because there would be less waste for the landlord to sell, he says.

But now, with half the planet living in crowded urban centres, “excrement is mostly seen as a threat,” he says. “You want to get it out, flush it away.”

That’s all fine, he says, until we start to consider both the necessary role of excrement in the planet’s ecosystem, and the sheer weight and numbers now involved.

As he wrote in one article:

Each person on the planet (the average one, somewhere between starving children in the Sudan and obese adults in the US) puts out 150 grams of excrement per day. That’s about 55 kilograms in a year…

By 2013, with more than 7 billion people on Earth, the total human output was close to 400 million metric tons (400 billion kilograms) of shit per year. That is about eighty million large bull elephants’ weight of crap!

The main problem, he says, is that it’s only seen as a problem. If half the livestock manure in the world was used to produce energy, he says, it could replace about 10 percent of current fossil fuels and save billions of dollars.

“It’s trying to get people to rethink this whole thing of excrement not as a problem but as a way that materials are circulated. How can we do that in such a way that we minimise (health) risk and get all the value out, because that’s what sustains life on the planet.”

Waltner-Toews, who is Professor Emeritus at the School of Population Medicine at the University of Guelph in Ontario and founding president of Veterinarians without Borders, doesn’t expect an overnight revolution that will see all of us happily drinking sewage treated water or filling up our cars with dung diesel.

But he says there are opportunities for change, particularly in large agricultural operations where using manure to generate energy is a way to save money, not a cost as it would be initially in an urban setting.

As a critic of industrial scale agriculture, this causes him some discomfort but he pragmatically points to one example of a US dairy, which has 80,000 cows and uses their manure to run 40 or more trucks.

“At that large scale, there is a good economic argument: they save on environmental regulation issues, they can run the trucks, they have energy for the farm. This is a way to use those nutrients: they’re not a problem, they’re a solution, they’re a resource in that system.”

But he also points to smaller examples that are both possible and start to change attitudes:

For the moment, he wants to turn around the way we think and speak about faeces.

He tells the story of a “righteous citizen” a few years ago in New York, who laid a public complaint about a car owner who had SHT HPPNS as a number plate.

In defence, the plate holder said it was short for: SHOUT HAPPINESS, and what on earth did the complainant think it stood for?

“We need to re-imagine this stuff because our lives will depend on it,” he says.