Such terrible, devastating news. Health economist Professor Gavin Mooney and his partner Delys Weston have been murdered in Tasmania (more details here from ABC and AAP).

Gavin will be known to regular Croakey readers as a prolific contributor since this blog’s start. Delys had recently completed her PhD in the political economy of global warming.

Gavin will be remembered for his passionate advocacy for equity and social justice at local and global levels, for his championing of citizen’s juries, and for his commitment to Indigenous health.

Since moving to Tasmania from WA, he’d become actively involved in primary health care reform, as well as pursuing advocacy for action on the social determinants of health.

A man of forthright views, Mooney was not afraid of ruffling feathers and speaking his mind, whether this meant taking on prime ministers and the medical lobby or the pharmaceutical industry.

His most recent publication at Croakey (which was actually written earlier this year) was to share some recommendations for books:

“Having recently moved to Tasmania I read The Sound of One Hand Clappingby Richard Flanagan (Picador 1999). Tells us so much about Australia (and not just Tassie) and the stories of how so many have come here … and also about longings and regrets and the horrors of war. Deeply moving. Very, very dark but quite extraordinarily beautifully written. This really moved me as few novels do.

Another world of health and another health care world are possible.

As a Scot from Glasgow – that ‘No Mean City’ – with a mother from the rural poor and a father from the slums of that city, I read The Tears that Made the Clyde by Carol Craig (Argyll 2010).

This is a book that is special for Glaswegians but it is a story for all who have a concern about the social determinants of health and who see public health as being essentially political and incapable of being fully understood outside of a class analysis.

Then Bad Samaritans, The Myth of Free Trade and the Secret History of Capitalism by Ha-Joon Chang (Bloomsbury 2008). The title says it all.”

Gavin’s own most recent book, The Health of Nations: towards a new political economy, was recently reviewed for this blog by Luke Slawomirski.

The last article that he wrote for Croakey was classic Mooney – looking at the public health and equity implications of wider political and economic debates – arguing that the recent GST review had been a missed opportunity for health.

Gavin Mooney had associations with many organisations, including the Universities of Sydney, NSW, Tasmania, Cape Town, Southern Denmark, and Aarhus.

Below are some of the early tributes from Twitter. I hope to share more memories at Croakey next week.

I am sorry not to be able to include more information about Delys here now, as I mainly knew Gavin. I know from others, however, that she cared passionately about many of the issues that also engaged Gavin’s concern and attention.

May Gavin and Delys rest in peace. 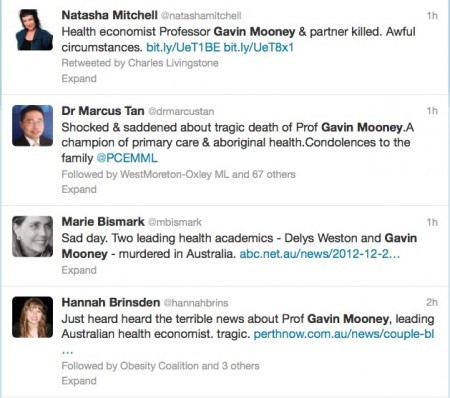 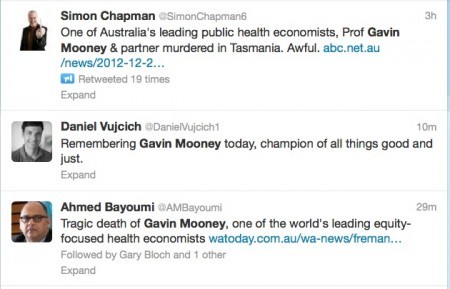 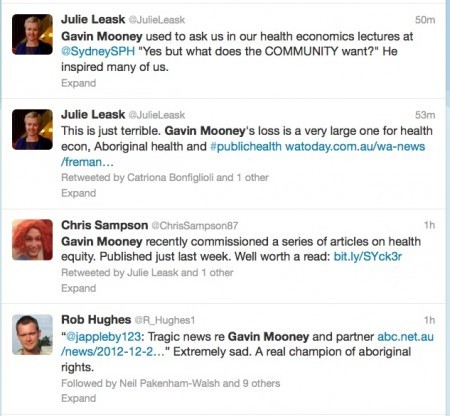 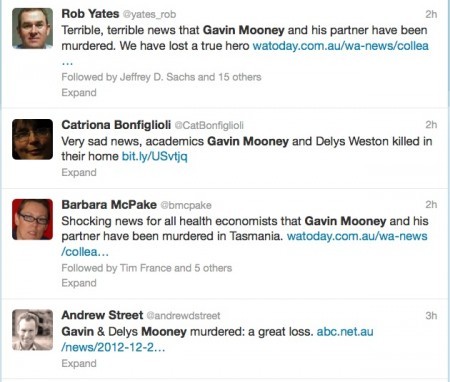 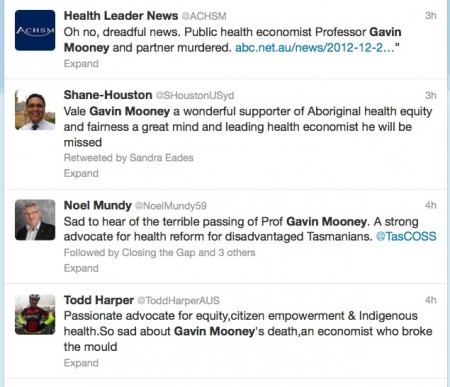