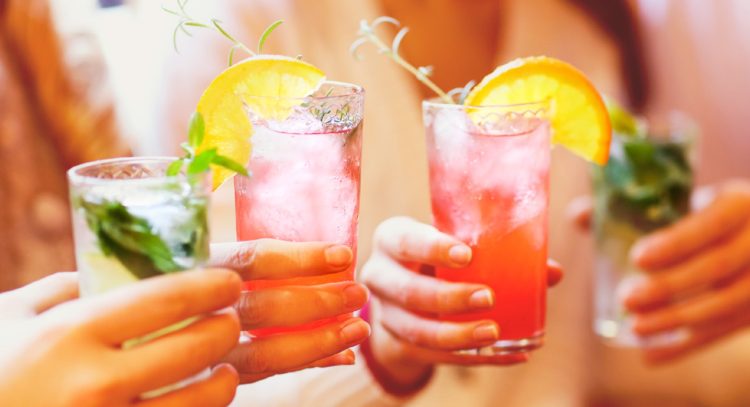 The alcohol industry in Australia is designing and promoting alcohol products specifically for women, according to a new report investigating how products are being marketed as pink, palatable and health-promoting.

Titled The ‘Instagrammability’ of pink drinks: How alcohol is marketed to women in Australia, the report is published by the Public Health Advocacy Institute of Western Australia, Cancer Council WA and the Alcohol Advertising Review Board.

Public health advocates say the report will be submitted to a Senate inquiry into Fetal Alcohol Spectrum Disorder (FASD) as evidence of the need for increased controls on alcohol marketing, especially to young women.

The use of social media influencers to promote alcohol products is just one strategy employed by alcohol manufacturers to increase their market share of the historically untapped female alcohol market – and it is working.

The gap between men and women’s alcohol use and levels of alcohol-related harm is reducing both globally and in Australia. While Australian females were 1.7 times as likely as males to have never consumed a full glass of alcohol in 2004, this had reduced to 1.2 times by 2016.

A new report by the Alcohol Programs Team at the Public Health Advocacy Institute of Western Australia (PHAIWA) and Cancer Council WA details how the development of products designed and marketed specifically for the female market is allowing alcohol companies to attract new consumers and increase their profits.

To identify industry tactics used to market alcohol to women in Australia, we searched twelve months’ worth of industry trade publications for such references as ‘female’, ‘woman’, ‘pink’, and ‘rose’, and reviewed the quotes to identify key themes and strategies, with examples in the extract from the report below. 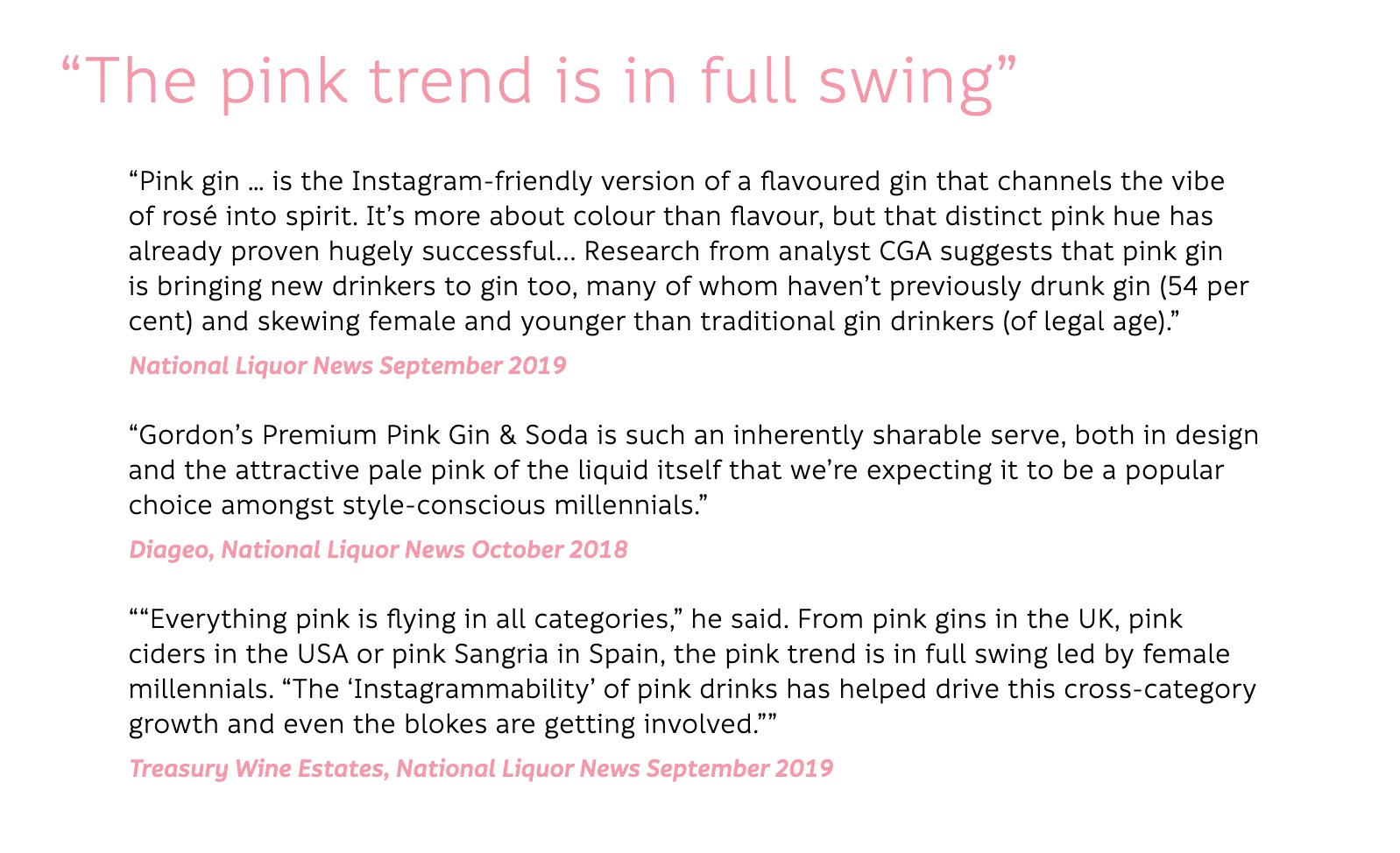 We then searched the Instagram and Facebook accounts of alcohol brands to locate examples of alcohol marketing that appeared to be aimed at women.

We found that products designed to appeal to women are often pink and palatable, use imagery that is highly likely to appeal to young women, and include health-related claims such as low sugar, low calorie, and natural ingredients.

These themes are consistent with those identified in previous research that has found the alcohol industry targets women through a number of strategies including the creation of new products, lifestyle messages underpinned by gender stereotypes, offers of stereotypical feminine accessories, and messages of empowerment.

Some of the Instagram and Facebook posts encouraged women to drink alcohol to wrap up the work week, enjoy a warm summer’s evening, bring in the new year, at summer parties, the movies, long lunches, days spent with the girls…

Given the extent of gender-based marketing that’s occurring, it should really be no surprise that the gap between men and women’s alcohol use is shrinking. 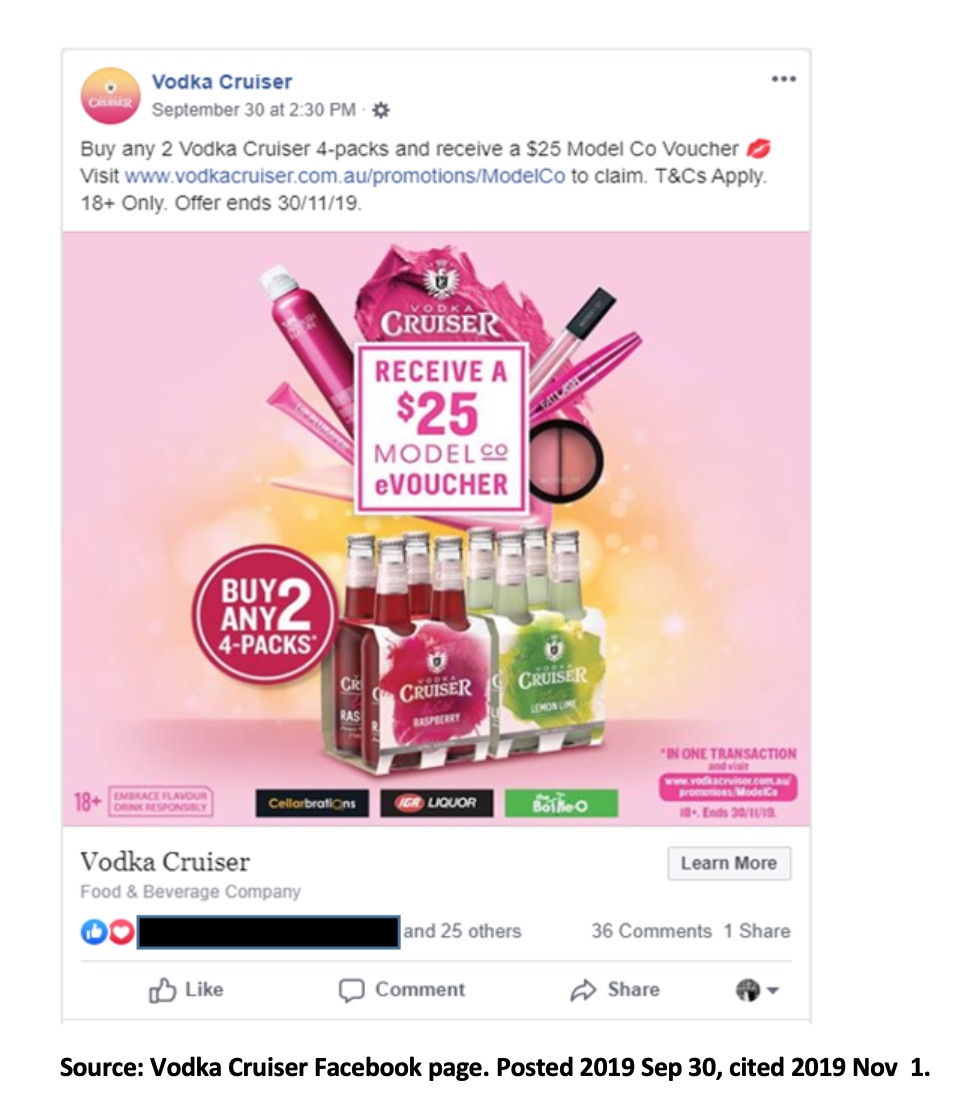 The more alcohol is consumed by Australians, the more harm individuals, families, and our broader community experience.

Thirty per cent of Australian women consume alcohol at levels that place them at risk of short-term harm, and around one in 11 women consume more than two standard drinks per day on average, increasing the risk of alcohol-related harm over their lifetime.

This is a concern due not only to the health risks that can affect anybody who consumes alcohol, but also because of the harms experienced specifically by women, including some cancers such as breast cancer. Alcohol is a risk factor for cancer of the mouth, pharynx, larynx, oesophagus, bowel, and breast, and is known to cause cancer. The link between alcohol and breast cancer is convincing and it is estimated that alcohol consumption causes one in five of all new breast cancer cases.

Alcohol use during pregnancy is another serious concern, as it is the leading cause of preventable birth defects. We know that there are still a number of Australian women who drink alcohol while pregnant.

Reducing alcohol use during pregnancy will reduce the prevalence and severity of Fetal Alcohol Spectrum Disorder (FASD), an entirely preventable but incurable condition caused by the baby’s exposure to alcohol in the womb.

Alcohol advertising, like most other unhealthy commodity advertising in Australia, is subject to an industry funded and managed scheme; in this case the Alcohol Beverages Advertising Code (ABAC) Scheme.

The ABAC Scheme sets out standards for the content of alcohol marketing in the ABAC Responsible Alcohol Marketing Code. This code does not apply specific standards to alcohol advertising that appeals to women, and as our report highlights, there is evidence of the code failing to adequately address the themes used to target women.

We know that evidence-based policies that work to reduce alcohol consumption include strong restrictions on the content, placement, and volume of alcohol marketing.

Given the evidence indicating that alcohol marketing influences drinking behaviours, there is a strong rationale to address alcohol marketing targeted at women as part of a comprehensive approach to reducing consumption among women of child‐bearing age.

The Senate Community Affairs References Committee is currently holding an inquiry into effective approaches into the prevention and diagnosis of, and support for, FASD.

We will submit our report to the Committee and recommend the introduction of strong, independent controls on alcohol marketing (especially to young women).

FASD has severe and lifelong consequences for our children, families, and communities, and serious action on alcohol marketing is needed to help give our children the best possible start to life. 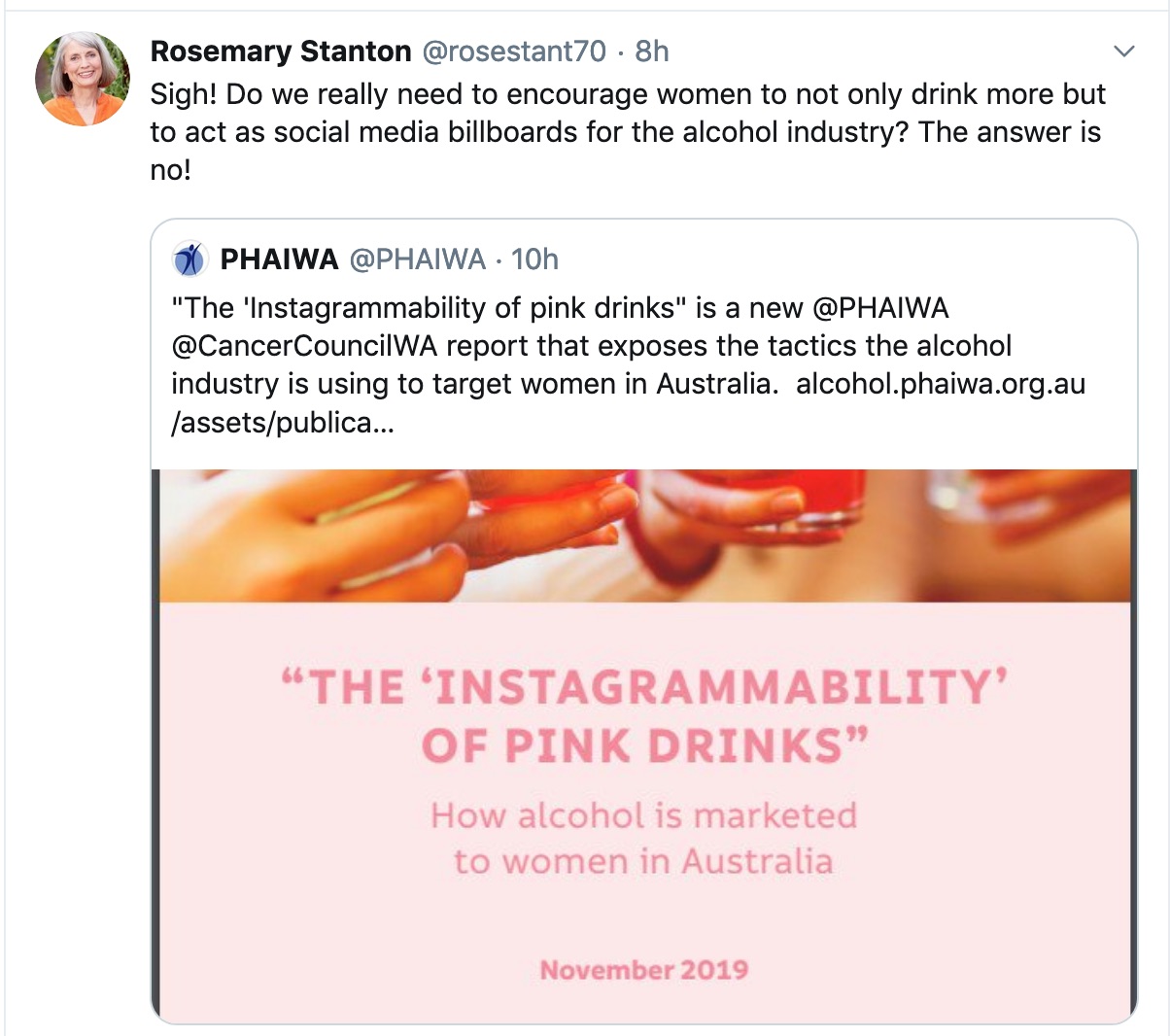 PrevPreviousCalls for alternatives to police in mental health crises
NextHow to save the world from climate catastrophe? Listen to this doctor from Tuvalu…Next