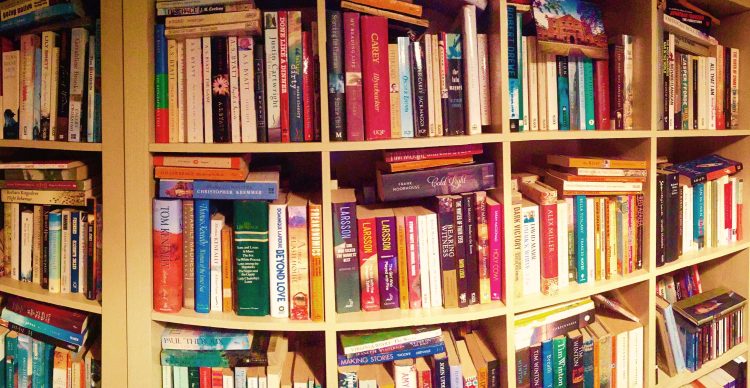 A veritable feast of healthy reading – recommending some timely LongReads

I hope you have an appetite for some wide-ranging reading.

Welcome to a compilation of some recent publications, ranging from over/under use of healthcare to criminal justice reform, acting on diabetes but upstream, and threats to global health arising from globalisation and the retreat from humanitarianism.

When is care “right”?

The Lancet has launched a “Right Care Series” (authors include a number of Australian researchers) to put the global spotlight on both the overuse and underuse of health and medical services.

Overuse is defined as “the provision of medical services that are more likely to cause harm than good”, and underuse as “the failure to use effective and affordable medical interventions”.

The series authors argue that both overuse and underuse happen side-by-side in different countries, within countries, among populations, within institutions, and even for a single person.

The series includes a profile of Dr Vikas Saini, a cardiologist, and President of the Lown Institute in Boston, who is part of a grassroots movement, the Right Care Alliance, which urges members of the public and clinicians to sign this declaration (it’s worth a read, too).

The Right Care Series is timely given the challenges presented by the election of Donald Trump, as outlined here by Bernie Sanders and here in more depth by the excellent Laurie Garrett (not to mention moves to reform the Medicare Benefits Schedule in Australia).

Read the series – or catch up via these tweets below from The Lancet’s editor-in-chief, Richard Horton, whose Twitter bio makes an art form of brevity, stating: “welcome to a permanent attack on the present”. 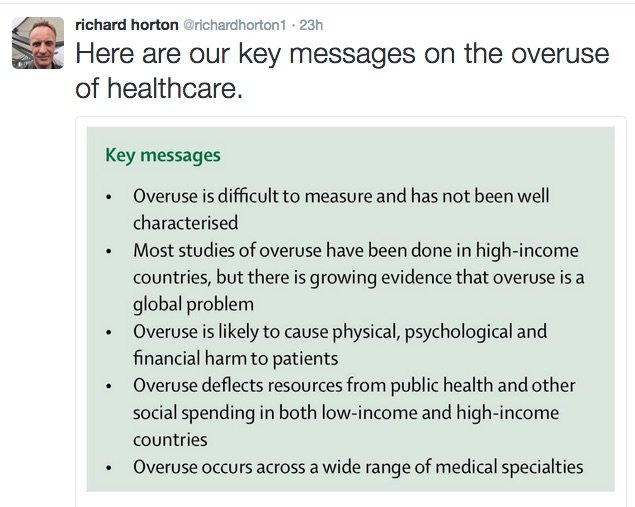 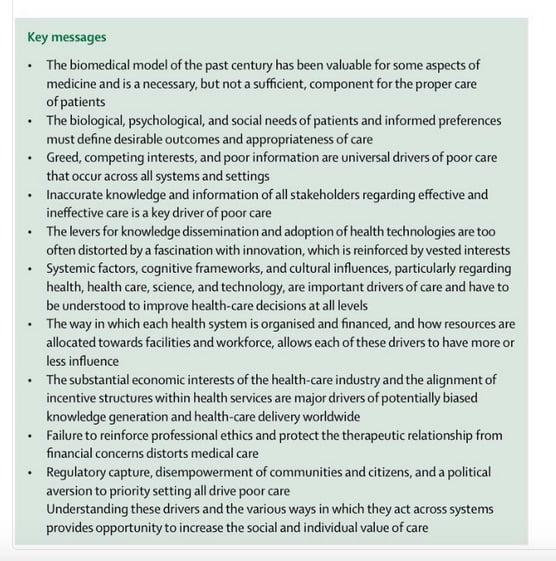 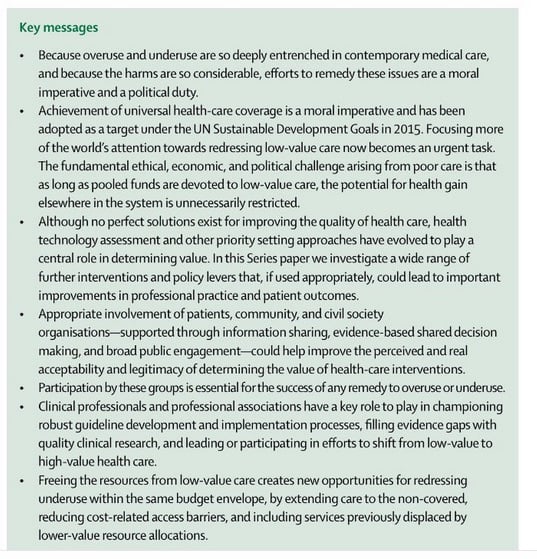 However, the topic cannot be avoided when it comes to preventing type 2 diabetes, as demonstrated by research recently published by the BMJ, Efficacy and effectiveness of screen and treat policies in prevention of type 2 diabetes: systematic review and meta-analysis of screening tests and interventions.

English researchers report that a range of problems associated with screening for diabetes – including false positive and false negative results – mean that “screen and treat” policies alone are unlikely to have substantial impact on the worsening epidemic.

In a related commentary at the CardioBrief site that is worth reading, Dr Victor Montori from the Mayo Clinic describes “screen and treat” approaches as accidentally cruel, and a waste of time, attention and resources.

…we need solutions that don’t leave the conditions that have created the epidemic intact, making the efforts of those set on improving their lifestyle often seem futile in the long run, producing more at-risk people, burdening the sick-care system with healthy people seeking wellness.”

Social policy is obviously a key site for action on the wider determinants of health, so we must all hope there will be some careful evaluation of the health impacts of Finland’s experiment with basic income, which began this month.

In this article from The Conversation, English academics say Finland is the first European country to implement a plan whereby unemployed citizens receive a basic monthly income. It is a pilot scheme in which 2,000 randomly selected unemployed people receive €560 every month in place of their existing social security payments.

Recipients will continue to be paid even if they find work or, more significantly for some, even if they choose not to look for work. The trial will last for two years and is intended to reduce high levels of unemployment.

The expectation is that basic income will make the social security system much simpler by reducing bureaucracy, resulting in a fairer and more cost effective system that should end extreme poverty. It will also reward unpaid contributions to society, such as close family carers.

Imagine trying to design systems that made life better for recipients, rather than inflicting Centrelink nightmares, and suggesting they call Lifeline.

Lessons from the US in criminal justice reform?

The criminal justice system is another critical site for acting on the determinants of health, particularly for those who currently get a raw deal.

The Harvard Law Review has just published a #LongRead by Barack Obama, The President’s Role in Advancing Criminal Justice Reform, which is well worth a read.

It includes some gob-smacking stats, including that:

On a more positive note, Obama argues that there has been quite a sea change in attitudes and policy, even in conservative states, including through use of Justice Reinvestment (an approach also highlighted in Croakey’s #JustJustice series).

“At the state level, we are increasingly seeing tough-on-crime rhetoric recede, replaced by a call for better public safety at a lower cost,” he says.

Obama also outlines wide ranging recommendations to reform policing in the wake of police shootings in Ferguson, Cleveland and elsewhere, including efforts to address implicit bias.

He also addresses the criminalisation of poverty, gun violence, and the need to tackle opioid misuse and addiction as a public health issue.

And here you can read from the journal’s editor about publishing the piece, and how it resonated with his own personal story. 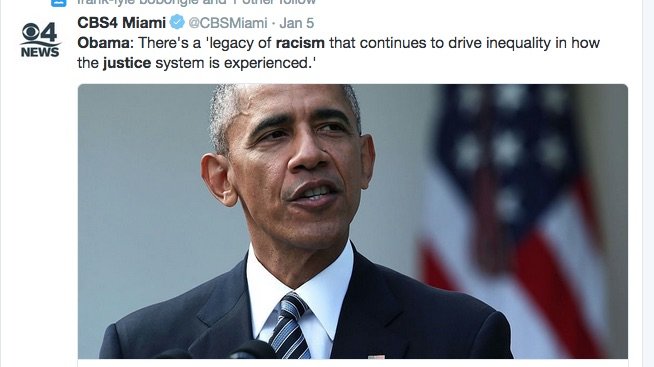 The decline of altruism and other global health challenges

Another #LongRead not to miss is the previously mentioned article by Laurie Garrett, Senior Fellow for Global Health Council on Foreign Relations in New York City.

She reflects on pressing global health challenges, including the implications of President Trump’s ascendancy, the decline of “globalized altruism” in the face of growing inequality, and the rise of war crimes.

The year 2016 witnessed the obliteration of Aleppo, Syria, including 250 acts of deliberate targeting of health care facilities and medical personnel. It was also the year when the rules of war, including the neutrality of health facilities, the Red Cross, UN personnel, and journalists, were tossed on the rubbish heap of history.

Médecins Sans Frontières (MSF, or Doctors Without Borders) and dozens of other humanitarian organizations decried the targeting of Aleppo’s White Helmet volunteers and other medical workers all over the war-torn world, but neither the UN Security Council nor any other international institution seemed capable of stopping the carnage.

The horror was not confined to Syria; conflicts in Afghanistan, Chad, Iraq, South Sudan, and Yemen saw casualties among medical personnel.

According to the United Nations, in 2015, a record 65.3 million people were forcibly relocated from their homes, forming the world’s largest movement of refugees and stateless people in known history.

Humanitarian organizations and UN agencies are overwhelmed. Donors are exhausted. Days before Christmas, the UN World Food Program announced it had run out of food and money for 150,000 war refugees stranded in the Central African Republic and would abandon that effort.

By the end of 2015, 86 percent of refugees were stranded not on an island in Greece or in an immigrant detention center in Sweden, but in poorer countries in the Middle East, Africa, and South Asia.”

Garrett cites Antonio Donini, who tracks humanitarian work worldwide and who recently wrote that “humanitarianism has reached its historical limits and is now on the cusp of retreat”.

All of which suggests the need to continue reading widely, and looking beyond the boundaries of disciplines, sectors and self interest when pondering the health challenges we face, locally and globally.

PrevPreviousAs Sussan Ley is stood aside from Ministry, what are the implications for health and aged care?
NextNew report on the economics of tobacco control highlights growing market power of Big TobaccoNext