A wealth of resources on social media, palliative care, and end-of-life experiences

In a recent Croakey post, I asked for readers’ suggestions for improving a presentation to a Palliative Care Australia forum on how social media might help palliative care.

When I came to finalise the presentation, I realised that a more appropriate title was: how can social media improve peoples’ end-of-life experiences?  (ie to focus on the person rather than the service).

At the forum (the presentations are now online), we heard how The GroundSwell Project is using social media to advance community understanding about death and dying, and innovation in palliative care.

Kerrie Noonan, the founder and director of GroundSwell, explains more about her organisation’s work below.

At the bottom of the post, you will also find some Croakey readers’ feedback to the previous blog, as well as some points of interest from the forum.

It was with great interest that I attended the Palliative Care Australia stakeholders’ forum in Canberra recently where we talked about strategies that encourage increased community awareness about palliative care.

This includes amplifying community conversation and knowledge about death and dying. Social media was a big part of this discussion, and it was wonderful to see this on the agenda because whilst there is a lively international community of palliative care tweeple and social media communicators, on a national level we have yet to fully explore the potential of new media to share our stories.

I was invited to the forum as the director of a not-for-profit health promotion organisation, The GroundSwell Project. We use both traditional arts and digital media to promote resilience and community well-being at end-of-life and through bereavement. We collaborate with schools, palliative and aged care organisations to run our arts programs and to encourage awareness about what we call ‘death literacy’ in the community.

(A grab from the online recording of the forum: Kerrie describing her work in social media)

As a health-promotion organisation our work is underpinned by a public health and social approach to death, dying and bereavement, and social media is our preferred platform for communicating about our work.

We have embraced Facebook, Flickr, Youtube, Twitter and WordPress to share stories about our projects. For instance, news about our current high school drama project on organ donation is regularly posted on our main website and can also be followed via a dedicated project website. At the same time all the participants are actively involved in sharing via a closed Facebook group. Photos and videos are also integrated across our websites thanks to Flickr and YouTube. Everyone in the project, young and old, is involved in sharing online.

Social media basically enables us to run intimate and meaningful projects and whilst at the same time sharing learning and outcomes on a broad scale, inviting others to join in on the conversations.

We also use social media for networking, sharing information and connecting with collaborators. We have connections with palliative care tweeps from all over the world, and thanks to @Renee_Berry and the #HPM hash-tag and we can keep up with major public health initiatives on palliative care internationally via key organisations and individuals including @dyingmatters in the UK,  @ScottIrwinMD and blogger @ctstclair in the USA.

We also follow @drsureshkumar at the Institute of Palliative Medicine in Calicut, India. Dr Suresh and his colleagues have pioneered the public health approach to palliative care, thereby mobilising thousands of community members to work in their communities in Kerala and using social media to share their stories. This provides exciting possibilities for collaboration in world wide press conferences and social action happening online (see Concern Without Borders).

For GroundSwell here at home, it took some time to build connections and get efficient systems in place so we sought out collaborators such as @Curiousworks and @Sarallenconsult, both experts in social media. In our experience people are very generous and will answer questions online while you are starting out. Check out blogs like this by Laurel Papworth too.

In palliative care, whether as coalface workers, researchers or community members we have such important stories to share, so my advice is to jump in and get started. Think of social media as just another form of storytelling and a way to share information about the work we do. The more we share about our work the greater the knowledge and the broader the literacy about death and dying in the community.

Let’s also look to the success stories – to campaigns such as DonateLife with one of the most active Facebook sites (almost 30,000 members) around and to the Life Before Death campaign from Singapore. Let’s also look for stories outside of our own sector. For instance, earlier this year we posted a short film (and Tropfest runner-up for 2011) ‘The Unspoken’ by Jason van Genderen, and it was shared all over the world.

If, as the research reported recently by Palliative Care Australia suggests, more of us want to talk about death and dying, and more of us want to access information about palliative care, social media provides a strong platform through which to begin this.

The key word is collaboration. The tools are there. We just need to get in there and use them…

• Kerrie Noonan and Peta Murray, from the The GroundSwell Project

Meanwhile,  Charles Leadbeater, leading authority on innovation and creativity and the co-author of the UK report Dying for Change, will be in Sydney June 13, and GroundSwell has more details here.

Notes from some of the Forum discussions

• The Productivity Commission’s draft report, Caring for Older Australians, didn’t include “dying well” as an explicit objective. This was an “unintended oversight” that has been remedied after feedback from Palliative Care Australia.

• Many people raised the need for greater awareness and discussion about advanced care planning. One suggestion was that it should be required as part of intake into residential facilities, at an appropriate time. Another comment was: “If you have got a will, you should have an advanced care plan.”

• The notion of healthy dying needs to be part of public health discussions and the health promotion agenda. As one speaker said, “healthy people die”. We all do, sooner or later…

• A barrier to people being able to choose their place of death is the lack of social capacity to care for people at home. Not everyone has people willing and able to care for them at home.

Other examples of social media’s use included:

• The Waving Not Drowning 1 blog, which is part of the Greater Western Area Health Service Palliative Care and Cancer Services Supportive Care program in NSW, provides a place where palliative patients or their carers can get information or links to resources and support in their local community (and outside their local area).  Development of this site was supported by Arts OutWest NSW Regional Arts and Health program. 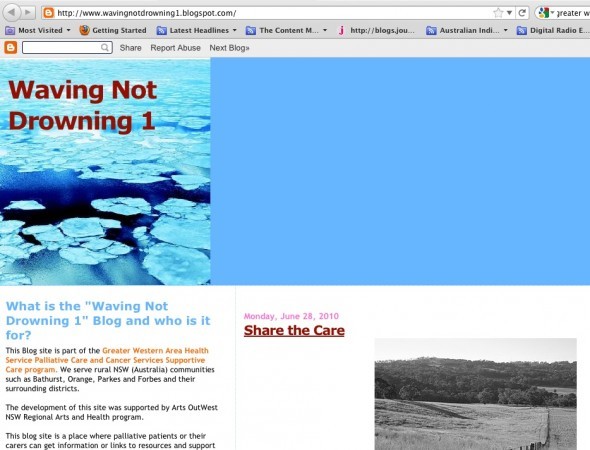 “This blog site creates an opportunity for people living with a chronic life threatening illness and the people who care for them to communicate to others in a similar situation by sending an entry which will be posted on the blog which others can read and respond too. This blog is also for people who have experienced the threat of being diagnosed with a life threatening illness, survived and would like to talk about their experience.”

Some of the feedback can be seen at the bottom of the original post but below are some extras that arrived via email and Twitter.

One reader, who wishes to remain anonymous, sent in this moving personal account:

My wife and myself read his final blog post and we wept and we had meaningful glances, expressing shared acceptance.

I’m a 3 yrs 5 months survivor of colon cancer.  My wife and I and my family live with the numbers of it returning and then consequential probable messy end.

We live with a lot of anxiety about this and our peers blogging their stories helps with this fear.

Fear when it is unknown is far worse.

PrevPreviousDisclosure of million-dollar pharma payments to health professionals: will it help?
NextAdverse events, vaccination and the case for a no-fault compo schemeNext