The conference yielded many pithy tips, including: ‘A good motto for CQI innovation: Steal shamelessly, share generously’; and ‘Tell me and I’ll forget; show me and I may remember; but include me and I’ll understand’.

And towards the bottom of this post – the final instalment of Croakey’s coverage of the conference – is a gallery of tweets and photos.

CQI for Aboriginal health: finding a better way, every day, every step of the way

“They weren’t listening, they didn’t want to hear they were sick,” said Health Promotion Team Leader Jenny Sewter of the Go Physical Be Healthier program. So Apunipima decided to involve young people in a hip hop project as a way to encourage their families to access health centres.

“They’re the ones who see their parents sick, or going to the hospital with diabetes or heart pain, getting flown out of the community and away from them,” she said. “So through the hip hop project we got them engaged on messages that their parents need to start eating healthy, exercising, going to the health clinic for regular checks.”

The results are these fantastic videos which were shown at the Lowitja Institute’s Continuous Quality Improvement conference in Melbourne. 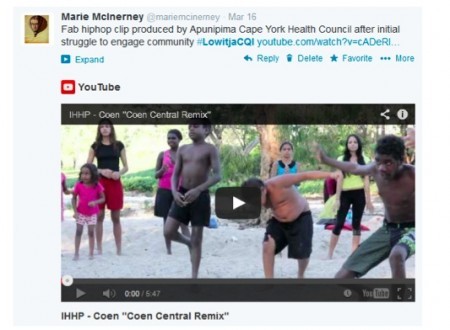 They were used to illustrate how Apunipima has embraced the concept of continuous quality improvement (CQI) across the organisation.

While Apunipima loved the content of the videos, and were seeing people in the community get more involved in local sports and at the health clinic as a result, they felt the process of making them could be improved and have a longer-term impact on both health and relationships in the community.

So they applied CQI approaches to the creation of the new round of hip videos which are being launched this year – with the first set for April 16.

“We evaluated the process after the first two videos.

That highlighted the need for a range of different improvements: allow more time in the community beforehand, better planning around the filming,  formal agreements with the producers, and that we wanted more involvement through the Council, and local groups like the ‘Mums and Bubs’ and Women’s and Men’s Health.

These improvements help us have a better process in place.” 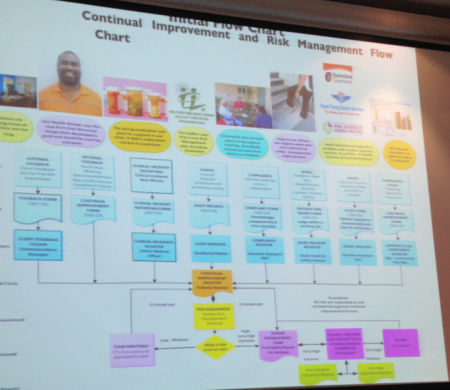 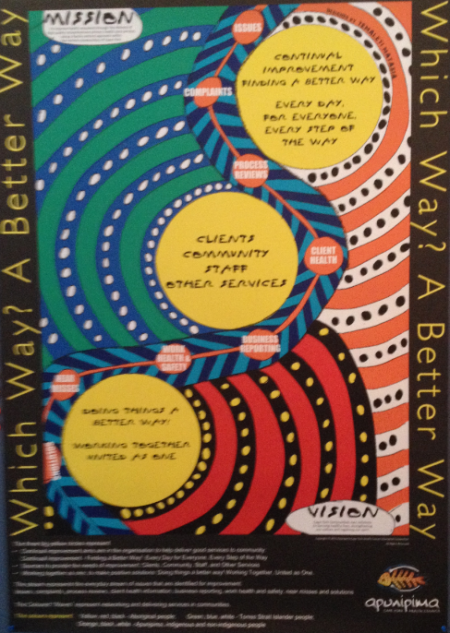 “We wanted to communicate CQI in our organisation in an inspiring, engaging, culturally appropriate way,” said Apunipima Quality and Risk Manager Roberta Newton of the poster that was designed by Temaleti Matasia through an all staff competition.

“Instead of the usual flowcharts and policies and procedures – which we do have as well – we wanted a way to communicate the concept.” 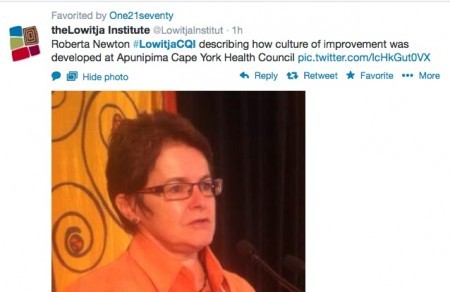 The circle at the top of the poster, which was developed as part of an internal competition, defines CQI for the organisation:

“Finding a better way, every day, for everyone, every step of the way”.

“We’ve kept the flow chart: it does have a place, but it’s not something we use to communicate CQI,” Newton said.

The poster is used for induction of new staff, it’s printed on the mouse mats on everyone’s desks, and it’s inspired “very visual” storyboards and articles in Apunipima’s newsletters which celebrate CQI case study successes.

“It’s part of developing a culture of improvement,” she said.

Apunipima is not the only Aboriginal health organisation praised for its CQI successes and using hip hop for health messages. So too is the Katherine West Health Board, which produced this: 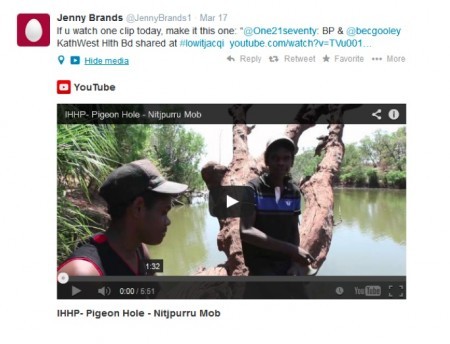 Associate Professor Barbara Nattabi from the Combined Universities Centre for Rural Health in Western Australia said there are many factors behind those figures, including: socioeconomic disadvantage, a younger and more mobile population, and poor health literacy.

But lack of accessibility to health services in general and in particular the quality of the sexual health care services provided was also an important factor, she said.

In response, the Lowitja Institute has funded the development of the first nationwide clinical audit tool that will enable Aboriginal health services to apply best practice CQI to sexual health care.

The tool will be released in the coming months and available for testing in more than 200 Aboriginal community controlled health services (ACCHOs) through the National Centre for Quality Improvement in Indigenous Primary Health Care (One21seventy).

In another initiative, Simon Graham, who is completing his PhD at the Kirby Institute of the University of New South Wales, won the Emerging Aboriginal and Torres Strait Islander Researcher Award for his work on a quality improvement program (known as SHIMMER) aimed at boosting detection rates for STIs among young people at ACCHOs in New South Wales.

“The ACCHS were able to triple sexual health testing among 15-19 year olds and detect more than double the number of asymptomatic infections,” he said. One ACCHS was able to reach a 43 per cent testing rate among 15-19 year women – four times greater than mainstream rates.

The program has now been expanded to other ACCHS in New South Wales, and has potential also, he believes, to improve the management of other conditions such as diabetes and renal disease.

Finally, the conference also heard about a project at the Goondir Health Services west of Brisbane that used staff and patient surveys to improve testing, treatment and followup.

It developed ways to address silos within the service, shame and embarrassment about dealing with sexual health issues, and for all staff – from the receptionist to the clinician – to understand “patient journeys”.

The results have been promising: with the rate of Chlamydia testing rising from zero to 15 per cent of male attendees aged 15-29 and from 5 to 47 per cent in women, with long-term sustained improvements.

“(Program evaluation) should contribute to the development of services, and not be simply a tool for distant bureaucrats to justify or decrease levels of funding.” Royal Commission into Aboriginal Deaths in Custody (1991).

A theme of the conference was the need for data to be useful and utilised.

Jason Agostino, data clinician at the National Aboriginal Community Controlled Health Organisation (NACCHO), said Aboriginal health organisations are “flooded with data” but in the past this hasn’t been useful without adding to the “enormous burden of reporting” that services already have.

Until recently the Aboriginal community controlled sector has only been able to access data at the bottom point of the slide diagram (below), that is aggregated and mixed in with other service providers, he said.

However, the way new national key performance indicators are being reported provides the opportunity to set up a more useful national data repository. 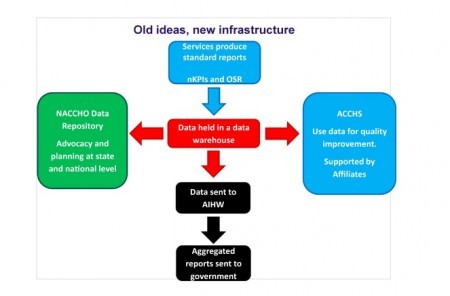 The qiConnect portal is not yet live, but here’s a mock up of the CEO Dashboard which will aim to provide services with useful planning and advocacy data. 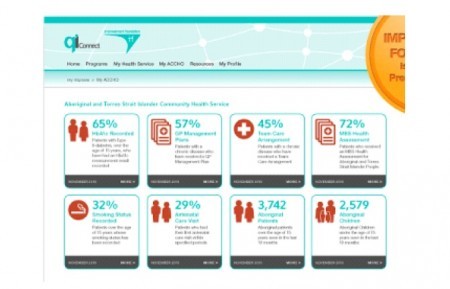 Lessons learnt in the NT

The Northern Territory has benefited from a concerted CQI Investment Strategy, which was implemented as part of the NT Intervention.

Amid calls for similar investment across the country,  Kerry Copley and Louise Patel from the Aboriginal Medical Services Alliance Northern Territory (AMSANT) outlined some of the lessons learnt:

Practical and strategic challenges still to be addressed to get the most out of CQI included:

Finally, he said, while improving quality is critical to closing the gap in Aboriginal and Torres Strait Islander health, he warned it was vital to “look up and out of organisations”, citing this Harvard blog about the lessons Japan can teach.

“You can get so involved in the process, you forget about asking where it’s all leading,” he said. 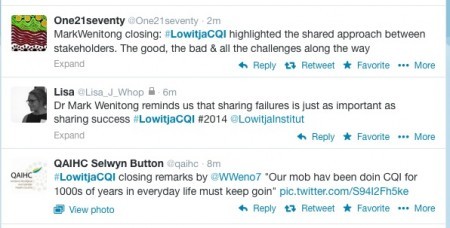 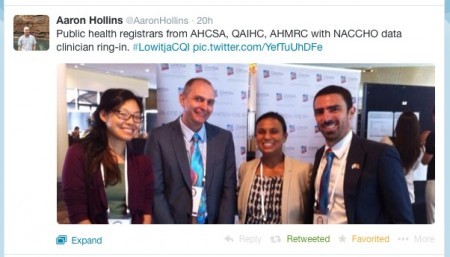 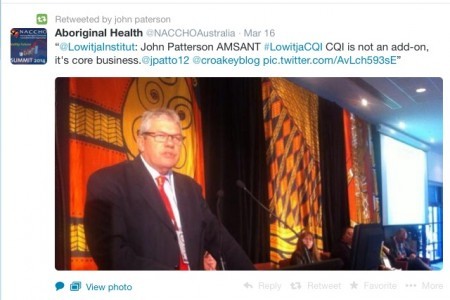 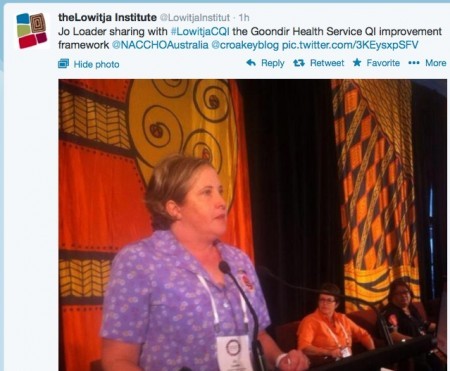 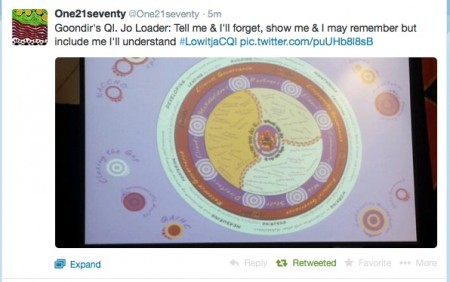 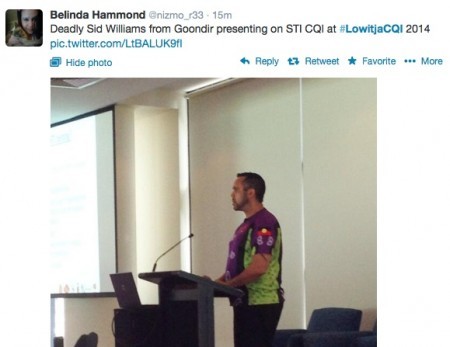 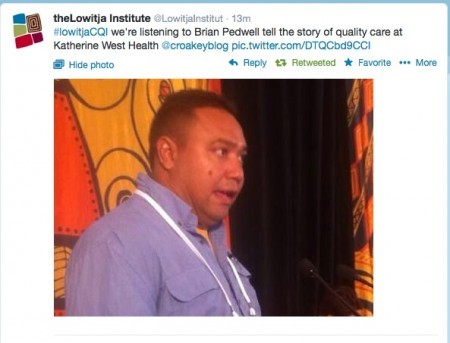 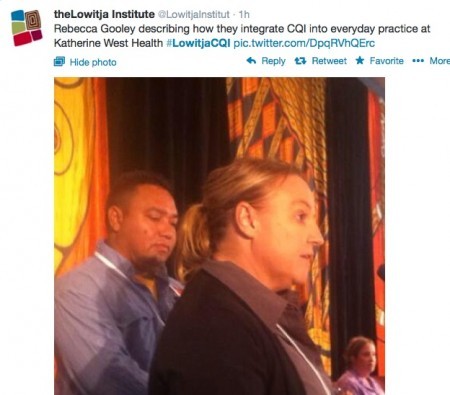 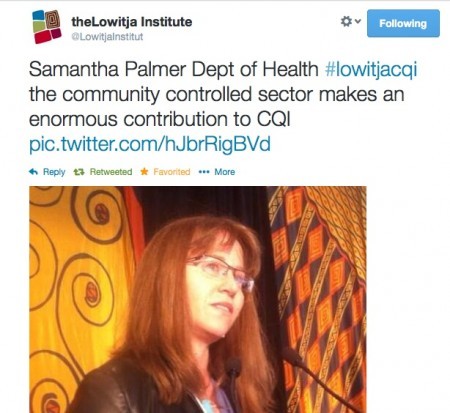 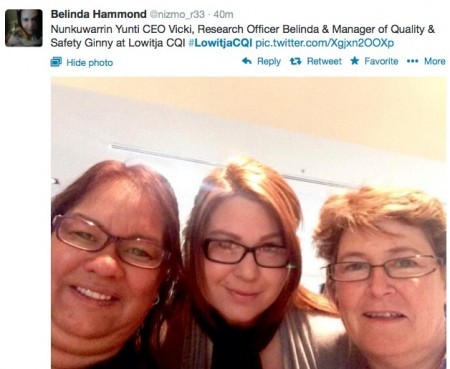 And this seems an appropriate quote for ending our coverage: 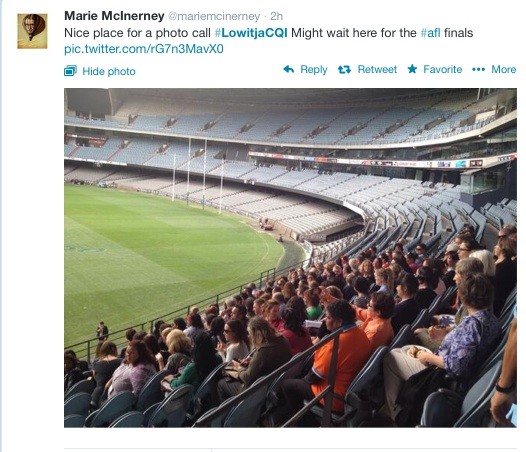 Photo credit (above) James Henry. James is a photographer, and also a musician who has performed with artists and groups such as the Black Arm Band, Archie Roach and the Skin Choir, as well as being a singer/songwriter in his own right and resident sound engineer at Songlines Aboriginal Music.

• Croakey’s coverage of the conference is compiled here.