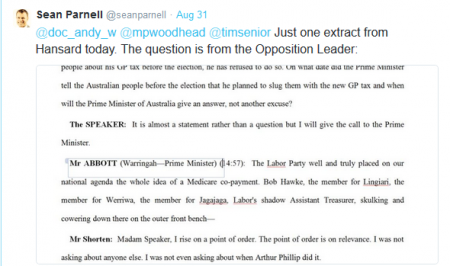 This Sunday marks the first anniversary of the election of the Abbott Government.

We’ll leave it up to Croakey readers to characterise the year in health – feel free to post (publishable) comments and we’ll share them.

This post below from The Conversation by Jim Gillespie, Deputy Director of the Menzies Centre for Health Policy & Associate Professor in Health Policy at University of Sydney provides a great wrap, noting:

Abbott’s small-target election strategy left health with few promises other than the assurance that his would be a “no surprises, no excuses government”. In practice, health has become the largest arena for apparent broken promises and unexpected surprises.

Tony Abbott is the first Australian prime minister to have previously served as minister for health. So it’s strange that his government’s forays in this complex and politically dangerous area have been so badly managed and poorly explained.

Whatever the final results of the GP co-payment battle, this political failing will make make the government’s future attempts at health reform far more difficult than necessary.

As Gillespie writes, it’s been the ‘slash and burn’ Federal Budget that’s really defined the Abbott Government on health rather than proactive health initiatives and innovative policies, although some developments, like the proposed GP co-payment and private health insurance GP trials may well prove radical to access to health care.

See the tweet above from The Australian’s Sean Parnell on the latest justification for the co-payment, a policy which does its best to ignore all the evidence.

You can also look back over  the year via Croakey’s coverage of Federal Election issues  or the 2014-15 Federal Budget.

It’s also interesting to look back on former Health Minister Nicola Roxon’s address last September to the Public Health Association of Australia’s annual conference on her predictions for health under the Abbott Government and how public health advocates might be able to attract support.

The lack of action we have seen so far from Prime Minister Abbott on improving Indigenous health must be one of the biggest lost opportunities so far – see this week’s call from Indigenous leaders for him to step in to address the Indigenous Affairs policy and funding environment, which they say is “descending into chaos”.

The Coalition entered the 2013 federal election without a health policy. After a year in government, it remains without one. While there has been activity in the health arena, there’s been little coherent direction.

The government’s first month was spent on an ideological campaign against agencies identified with the “nanny state”. The Alcohol and Other Drugs Council of Australia (established by the Holt government in 1966), for instance, was axed.

The Australian National Preventive Health Agency, which had long been a target for conservative critics, was a more expected casualty. It lost its funding in the Abbott government’s first budget, its functions disappearing within the Department of Health.

The National Partnership Agreement on Prevention with the states was also discarded.

Abbott’s small-target election strategy left health with few promises other than the assurance that his would be a “no surprises, no excuses government”. In practice, health has become the largest arena for apparent broken promises and unexpected surprises.

In a debate nine days before the election, Abbott declared:

We are not shutting any Medicare Locals.

A review of Medicare Locals straight after the election, led by the former Commonwealth chief medical officer, Dr John Horvath, found little more than teething problems in the very new program. Yet despite limited and vaguely stated criticisms, Horvath recommended the abolition of the program. And the budget duly announced the end of the Medicare Locals from July 2015.

The largest changes came with the budget, although the main measure – the $7 co-payment for visits to general practitioners – hasn’t made it through parliament yet (and, indeed, may not).

The ground for the measure had been prepared by the Commission of Audit’s proposal for a $15 GP co-payment for general patients, with reductions for concession card holders and those who fell into a safety net.

The budget halved this amount, and coupled it with a hastily cobbled together and ill-explained Medical Research Future Fund. Two of the budget’s larger savings measures – the GP co-payment and savings from changes to hospital funding – were steered towards this fund.

The defence of the measures hasn’t been helped by the confusion the Fund spawned – are they for ameliorating the budget emergency or expanding expenditure on medical research? Especially since promised medical discoveries could increase future health costs.

The presentation of the co-payments has been equally confused. The Commission of Audit had justified co-payments as price signals that would make consumers hesitate before demanding unnecessary services.

But they’re being added to a health system already littered with co-payments and out-of-pocket costs. And existing co-payments show few signs of the efficiency and health-seeking behaviour that treasury and finance department economists apparently believe follow from price signals.

Other changes are purely cost saving – but with an eye to repudiating the key policies of the previous government.

Labor’s hospital funding agreement with the states had promised the commonwealth would increase its share to 50% of growth in the cost of running public hospitals. These costs were to be restrained through a new “efficient” price set by the national Independent Hospital Pricing Authority.

The Abbott government withdrew from the agreement, keeping its payments at the existing level of 45% until mid-2017. The National Partnership Agreement (with the states) on Improving Hospital Services was also repudiated in the budget.

This shrinking of the Commonwealth’s hospital role is in stark contrast with Abbott’s declaration when he was health minister:

… the only big reform worth considering is giving one level of government – inevitably the federal government – responsibility for the entire health system.

Many of these cuts, especially the axing of the former government’s programs, could be seen as a new government clearing the way for a bold reform agenda. If this is the case, the shape of the new direction remains shrouded in mystery.

Still, policy need not be spelt out. Government action often enables new funding and service arrangements to emerge, leaving markets to shape the details. The Howard government’s expansion of private health insurance, for instance, opened the way for a vast market of for-profit hospitals services.

We may now be seeing a similar shift as the government turns a blind eye to private health insurers moving into primary health care. Coalition as well as Labor governments have previously supported a ban on private insurance for GP services, mainly because of fears this would lead to a cost explosion.

The funds, led by Medibank Private, have chafed at this ban. They argue that members with chronic illnesses are ill-served by health-care funding that only allows them to pay for treatment when it’s serious enough to require hospitalisation.

The audit commission had argued for a relaxation, and now Medibank Private has entered into contracts with GP clinics to pay an administration fee to exempt its members from gap payments. The Abbott government has stood by silently.

Tony Abbott is the first Australian prime minister to have previously served as minister for health. So it’s strange that his government’s forays in this complex and politically dangerous area have been so badly managed and poorly explained. Whatever the final results of the GP co-payment battle, this political failing will make make the government’s future attempts at health reform far more difficult than necessary.

Read the other articles in The Conversation’s Remaking Australia series here.

PrevPreviousAre privacy concerns holding back research that could benefit people in rural and remote areas?
NextClimate change & health: three days at a WHO event in Geneva while the RET sky fell in hereNext