Prime Minister Tony Abbott today announced a reshuffle of his Ministry, that has seen Peter Dutton move from Health to Immigration and replaced by Sussan Ley, former Assistant Minister for Education, who becomes the second woman in Cabinet (alongside Foreign Minister Julie Bishop).

His statement announcing the moves said:

The Hon Peter Dutton MP will be appointed as Minister for Immigration and Border Protection. A senior experienced minister and former police detective, the Australian people can be confident that Mr Dutton will be resolute in protecting Australia’s borders. He will join the National Security Committee of Cabinet.

The Hon Sussan Ley MP will be promoted into Cabinet and become the Minister for Health and the Minister for Sport. I have been impressed with Minister Ley’s transition into government and her excellent policy work in the education portfolio. Based in regional NSW with a varied life before entering politics that included stints as an air-traffic controller, farmer and a career with the Australian Tax Office, Sussan is a strong addition to my Cabinet team.

In other major moves, hardline Immigration Minister Scott Morrison – who has led the charge on the government’s brutal ‘stop the boats’ policies – has been promoted to Social Services Minister, while Kevin Andrews moves on to Defence.

On those moves, Abbott said:

Mr Morrison will devote all of his energy, policy skill and determination to this new portfolio which will have a renewed focus on families. In addition to responsibility for welfare, family support, seniors, aged care and the National Disability Insurance Scheme (NDIS), childcare will also be added to his portfolio.

Importantly, Mr Morrison will have carriage of the families package the Government will release next year to help ease the cost of living for Australian families by improving the affordability and accessibility of childcare.

I can think of no stronger advocate than Scott Morrison. His movement into an economic portfolio will see him join the Expenditure Review Committee of Cabinet, replacing the Hon Peter Dutton MP.

Asked whether the Social Services portfolio needed a strong dash of compassion, Abbott told journalists that Morrison was not only a tough operator but an “extremely decent human being”, adding that he “knows what it’s like” to struggle with a mortgage, to look for child care, schools, and health services.

On whether or not the reshuffle meant Morrison might now look fresh at some of former Minister Kevin Andrews’ toughest proposals, such as six month suspensions of the dole for young unemployed people which have been rejected so far by the Senate, Abbott said the new Minister would be talking to Senators in the coming weeks “to ensure we get the best possible result.”

“Let’s see where where those discussions go,” he said, adding he worked on the philosophy of “get what you can today, get what remains to be got tomorrow” (or words to that effect).

Abbott hailed Andrews’ recent crackdown on the disability support pension that will see government-contracted doctors assess new claims from next year as “very important” and said he believed “fit working age people should be working, preferably for a wage but if not, then for the dole”.

In other moves, following the resignation of Arthur Sinodinos late last week, Josh Frydenberg has been appointed Assistant Treasurer,  Education Minister Christopher Pyne will take on added responsibility of skills and training, and Ian Macfarlane gets Science added to his porfolio: the latter would “state in words what I always thought was obvious”, Abbott said. 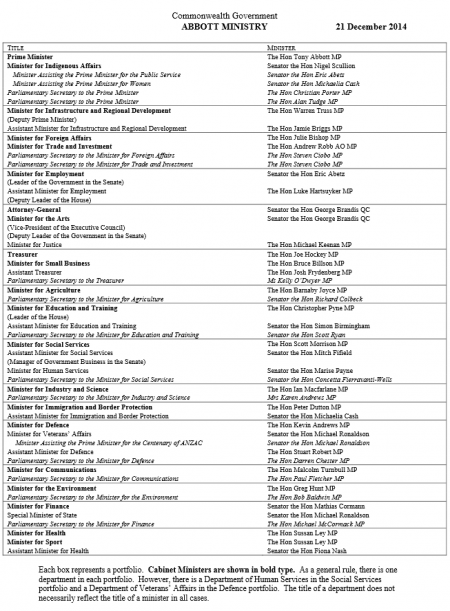 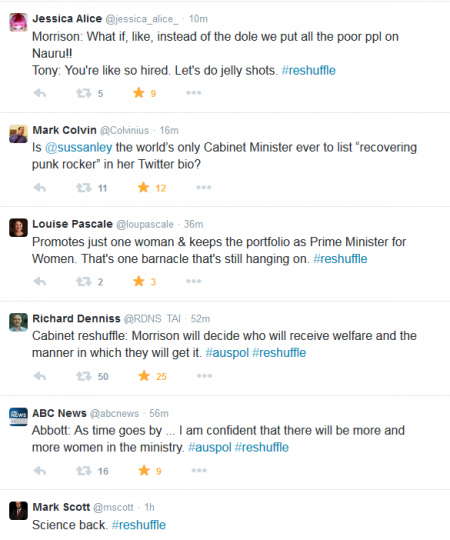 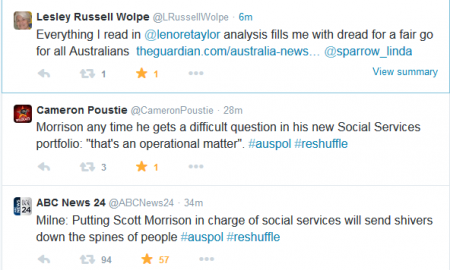 PrevPrevious“I’m a Health Worker, student & am homeless, by choice”: insight into the lives of Darwin’s street people.
NextPublic Health education: making it realNext