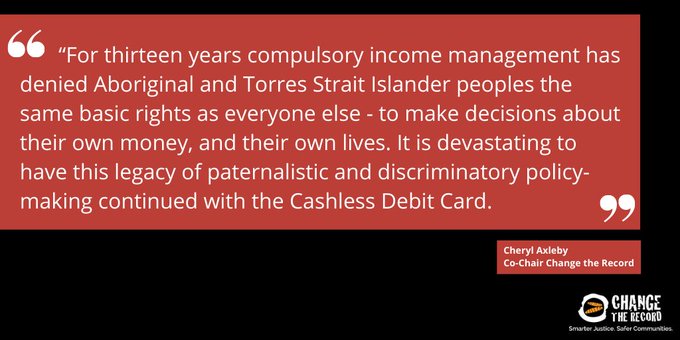 Aboriginal and Torres Strait Islander groups and advocates have condemned moves by the conservative Morrison government to extend by another two years the “punitive, discriminatory and harmful” cashless debit scheme, saying it was a regressive step in efforts to close the gap.

Legislation to continue the widely-condemned income management scheme for Aboriginal and Torres Strait Islander communities passed the Senate in the early hours of Thursday morning after Centre Alliance abstained from voting, giving Morrison and Pauline Hanson’s One Nation the numbers to get it over the line.

The government had originally been pushing to make the scheme — which is currently in trial form across a number of sites in three states — permanent, but was forced to amend this to an extension of the pilot period after Centre Alliance indicated it would vote the original bill down.

Under the amendments, Northern Territory populations who were to be grandfathered onto the card from the parallel Basics Card scheme started during the Intervention will remain under that scheme, a development the Change the Record coalition said would “only create confusion and continue paternalistic compulsory income control”.

The midnight passage of the watered-down legislation was denounced by Aboriginal and Torres Strait Islander peak organisations, legal services and human rights groups and many others who have campaigned for years against the discriminatory policy.

“We collectively condemn the decision as a step backwards when it comes to aspirations of Closing the Gap, and a disappointing reflection of the long way we have to go before First Nations voices and the wishes and experiences of Aboriginal and Torres Strait Islander communities are heard by decision-makers in Parliament House,” Change the Record said in a statement, describing the scheme as “punitive, discriminatory and harmful”. 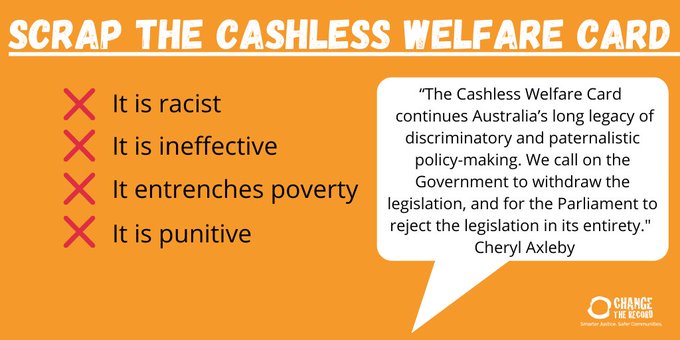 Labor MP Linda Burney, a Wiradjuri woman and shadow minister for Indigenous Australians, said the amendments were an acknowledgment of “significant community anxiety” about the scheme.

Not only had the card caused “significant hardship” to those who had been mandated to use it, preventing them “purchasing basics and essentials at affordable prices”, it was also “structurally racist”, with two thirds of people using it Aboriginal or Torres Strait Islanders.

Burney said it was clear that the government intended to roll out the scheme nationally, in defiance of community sentiment and a lack of evidence about its efficacy.

Yanyuwa woman Senator Malarndirri McCarthy from Labor condemned as “disgraceful” Centre Alliance’s Stirling Griff’s decision to abstain, while Greens Senator Rachael Siewert said it was a “shameful, dirty deal” and “heartbreaking and unforgivable” for Griff to dodge the vote.

“The Protection Acts were used to control our people, and now they’re back again with this Bill,” said Thorpe. “Our people need strong, culturally safe, self-determined supports and services. Instead we get the 21st century equivalent of rations and this new Protection Act.”

We have rounded up some of the other reaction to the decision below:

The fact that the racially discriminatory Cashless Debit Card Bill was continued without conclusive evidence of its effectiveness, following a completely inadequate consultation process is deeply concerning. This Bill will have harmful and damaging consequences for our people, is in direct conflict with the Closing the Gap agreement and should have been abolished in favour of Aboriginal community-controlled and led solutions and services.”

For thirteen years compulsory income management has denied Aboriginal and Torres Strait Islander peoples the same basic rights as everyone else – to make decisions about their own money, and their own lives. It is devastating to have this legacy of paternalistic and discriminatory policy-making continued with the Cashless Debit Card. We call on the Morrison Government, Centre Alliance and all members of Parliament to start walking the walk if they are genuine about Closing the Gap, and start listening to First Nations peoples and our communities.”

It’s hard to understand how we will ever get closer to First Nations people having their human rights respected when governments continue to treat us like second-class citizens. The CDC is dehumanising and attempts, unsuccessfully, to treat the symptoms of colonialism and dispossession.

This is punitive, a policy that disproportionately targets First Nations communities and has been repeatedly shown not to work. The existence of the Cashless Debit Card undermines the Government’s stated objective to partner with Aboriginal and Torres Strait Islander peoples to close the gap.”

In the midst of the worst recession in a century, the government has decided to subject people to the punitive and demeaning cashless debit card on a permanent basis. This card discriminates against Aboriginal and Torres Strait Islander peoples, is impractical, demeaning, unproven and expensive.

Instead of punishing people for being on a low income, the government should be working with First Nations People to deliver community-led solutions as well as permanently lifting income support payments so everyone can cover the basics.”

The Morrison Government has failed Aboriginal and Torres Strait Islander people once again. After completely disregarding the views of First Nations people, the Morrison Government has rammed through laws to extend the cashless debit card trials yet again, and introduce two different systems of income management in the Northern Territory. Compulsory income control in any form only serves to make life harder for people and families who have already experienced over 10 years of discriminatory social security policies.”