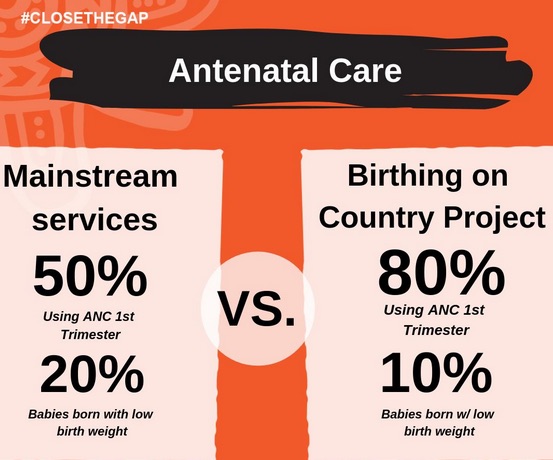 An infographic on Birthing on Country, shared by CATSINaM for Close The Gap Day.

More than 68,000 people have signed an online petition calling on the Victorian Government to protect Djab Wurrung birthing trees, as a longstanding blockade in south-west Victoria steps up efforts to stop the trees’ destruction by a VicRoads highway expansion.

The Congress of Aboriginal and Torres Strait Islander Nurses and Midwives (CATSINaM) has joined calls for the cultural site to be protected, noting the importance of birthing on country for the health and wellbeing of communities – an issue that will also be highlighted during Close the Gap Day on Thursday, 21 March.

“Continued desecration of culture and tradition will only result in increasing the gap in health outcomes,” writes Marni Tuala, president of the CATSINaM board.

We stand united with the Djab Wurrung Heritage Protection Embassy and all people fighting for our culture and traditions at #DjabWurrung.

Culture is at the centre of health and well-being for Aboriginal and Torres Strait Islander Peoples and communities. CATSINaM and other peak National organisations gave directive in the development of the ATSIHP that culture be central to the plan.

It is widely recognised and acknowledged that the cultural determinants of health are equally as important as the social determinants when addressing the health needs of Aboriginal and Torres Strait Islander peoples.

It is this holistic, all-encompassing definition of health that best relates to our people and communities. Not recognising and acknowledging the significance of culture and traditional practices perpetuates the systems and practices that are responsible for the disparities we see in health outcomes for our people.

Continued desecration of culture and tradition will only result in increasing the gap in health outcomes. If we as a Nation are serious about closing the gap and improving health outcomes for Aboriginal and Torres Strait Islander Peoples, our culture must be recognised and protected.

Birth is a sacred time, the beginning of our story, for women, for babies and for communities, birth is ceremonious. Countless generations of #Djabwurrung stories have begun under the protection of this tree and all that it holds and represents.

To disregard the significance of this birth site would be a continuation of the ethnocentric practices that were the foundation of colonisation and the catastrophic policy eras that have followed.

The last two years have seen momentous shift in the development and implementation of Birthing on Country models of care for our women – a practice undertaken by our people and communities for more than 60,000 years.

The evidence is clear, birthing on country improves outcomes for mothers, babies and communities.

Thus, it is hypocritical to support birthing on country in some regions and then destroy a traditional birthing site in another. This indicates complete lack of understanding of the underlying principles of birthing on country and what it means to our people and communities.

Systemic change requires better understanding and acknowledgment of the impact of historical practices on modern day health outcomes for Aboriginal and Torres Strait Islander people’s. This includes not only acknowledging the importance of culture to our health and wellbeing but making decisions based on this.

• See the Birthing on Country position statement jointly endorsed by CATSINaM, the Australian College of Midwives and CRANAplus. 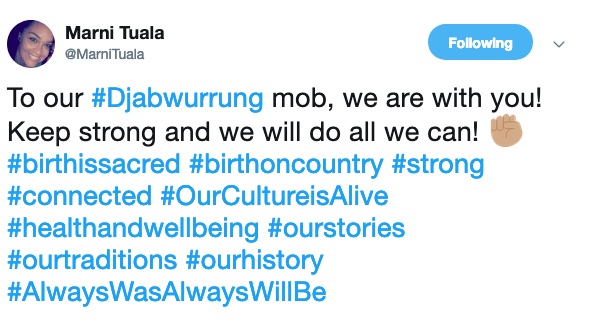 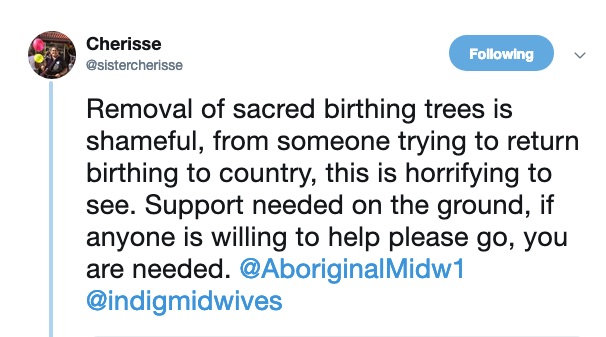 PrevPreviousThe NSW election – what’s health got to do with it?
NextFollow #HealthAdvocacyWIM for news from women in medicine panelNext