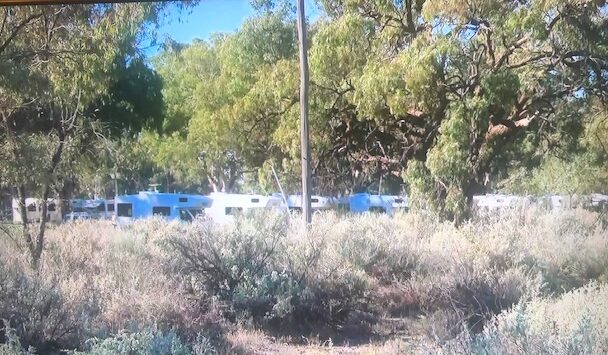 Thirty motorhomes have been set up in Wilcannia to enable COVID-positive members of the small community to isolate. Screen grab from ABC TV, 13 September, 2021.

Aboriginal and Torres Strait Islander leaders are calling for a seat at the table to guide the public health response to the NSW COVID outbreak, with current strategies in the state’s west labelled as “heavy-footed”.

The call came ahead of yesterday’s announcement of a vaccination boost for 30 communities.

Greater engagement with Aboriginal and Torres Strait Islander groups and improved communication about vaccines are critical to help contain the current COVID outbreak in western NSW and better support communities, a NSW Parliamentary inquiry has been told.

Speaking at an Inquiry into the NSW Government’s Management of the COVID-19 Pandemic earlier this week, Dr Peter Malouf, Executive Director of Operations at the Aboriginal Health and Medical Research Council of NSW, called for an urgent meeting with the NSW Health Minister and Chief Health Officer to improve engagement with the public health response to the COVID outbreak in the state’s west.

“This Government … is very lacking in engagement, particularly in listening to the voices of Aboriginal people in communities,” Malouf said. “I urgently request that we have a meeting with the [NSW Health] Minister as well as the Chief Health Officer to work through these critical issues.”

Malouf said greater engagement with Local Health Districts (LHDs) was also key to improving the COVID response in western and far western NSW. He said it was critical for LHDs to work with Aboriginal Community Controlled Organisations (ACCHOs) as well as other organisations, like Aboriginal Land Councils, to ensure a “holistic” approach to keeping communities safe.

“We can’t just focus on the virus, the virus mutates based on environmental factors, so it’s important that you have those other parties that are critical to the public health response at the table,” Malouf said.

At present, he said the public health response, particularly in western NSW, had been “very heavy footed” and “government-centric”.

“You now have the [Australian Defence Force] at the table, you have got police at the table. Communities don’t want this kind of military-type policing with the public health response, what we want is a localised response with community groups, Elders and those key partners to help with the growing infection rates.”

“They just want to be heard. That is the problem with this current outbreak is that Aboriginal voices are silent, particularly in communities where they are so vital to the response.”

Malouf said there had been “strong communication channels” between LHDs and the ACCHO sector at the beginning of the pandemic, but these had fallen away in the “chaotic environment” of the current crisis.

He said LHDs in western NSW were managing the crisis without consultation with key groups.

Also speaking to the Inquiry, Aunty Monica Kerwin, a Wilcannia Elder and community spokesperson, said calls were made 12 months ago to develop a “foolproof plan” to the protect the community in the likely event of a COVID outbreak.

“One of the things that we spoke [about in meetings with government agencies last year], was that we need a foolproof plan put in place to protect our people,” she said. “We needed to find somewhere to put our people who are living in over-crowded situations.”

Aunty Monica said that she felt at the time that no one was listening. “Nobody really cared what our opinion was. Personally, I felt that my opinion wasn’t valued at that level, and we only ever wanted to be part of the solution here.”

Susan Pearce, Controller, State Health Emergency Operations Centre, NSW Health, noted in the Inquiry that it was just over two weeks from when the first COVID case in Wilcannia was notified (18 August) to when 30 motorhomes were set up in the town on 6 September to ensure COVID-positive people who were living in crowded housing were able to safely isolate.

“Would we have liked that to be sooner? Certainly,” she said, noting that other accommodation options had been sourced outside the town, but there were concerns that this could dislocate families.

The Inquiry was held before yesterday’s Federal Government announcement that it would accelerate vaccination rollouts for Aboriginal and Torres Strait Islander people in 30 “priority areas”.

The announcement was made in partnership with the National Community Controlled Health Organisatioin (NACCHO), and states and territories. The areas are:

The vaccine push came after it was revealed yesterday that a software error had inflated Victoria’s vaccination rates for its Aboriginal and Torres Strait Islander population. 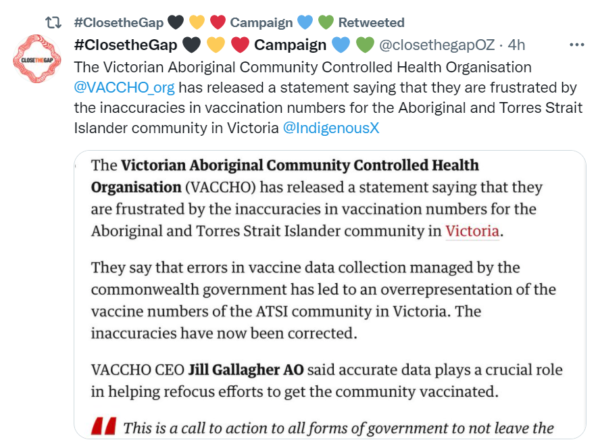 Local Aboriginal and Torres Strait Islander organisations have expressed frustration at the error.

Speaking to ABC Sydney after the blunder, Linda Burney, Shadow Minister for Indigenous Australians, she was “cross” with the narrative that vaccination rates in Indigenous communities were about hesitancy.

“Let me assure you, it’s about supply, and it’s especially about messaging,” Burney said.

“There are a number of Aboriginal communities, the Hunter being one, where vaccination rates are really high and there is no hesitancy. And I’ll tell you why … because the way in which the Aboriginal medical services in the Awabakal Aboriginal Corporation has gone about encouraging and demonstrating to people that they should get the vaccine is been kind of fantastic.”

She said this had been achieved by prominent families in the community getting vaccinated, encouraging wider uptake.

“It sends an incredible message to the whole community,” she said. 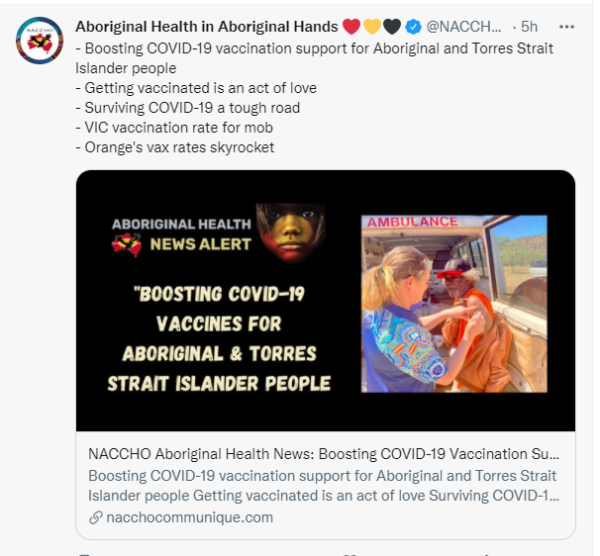 “Since the start of the year, [we have seen] poor communication and information around the vaccine rollout and it needs to be improved. And our ACCHOs are not resourced appropriately for the communications that is required to rollout the vaccinations,” Malouf told the Inquiry.

“We have to acknowledge that Aboriginal people have historical issues with the health system, so it’s about the health system trying to respond quickly to make sure they are delivering messages and obviously delivering vaccination in a culturally safe and respectful manner.”

Malouf added that there were concerns about burnout among Aboriginal health workers at this challenging time. He said there was not capacity in the workforce to provide relief for workers and prevent burnout.

“I would like to see a stronger relationship with our LHDs to ensure that we are able to provide relief work for our Aboriginal Community Controllers service staff so they don’t burn out,” he said.

Wendy Spencer, CEO of the Dharriwaa Elders Group in Walgett, said a recent team of volunteer nurses from the University of Newcastle, as well as some Royal Flying Doctor Service nurses, had recently provided some welcome relief in the town.

“It allowed the [Walgett Aboriginal Medical Service] to continue their vaccinations at their base but also to go mobile, which was terrific,” she said.

The additional capacity also enabled doctors to spend time with Elders in the town who had concerns about the vaccines.

“Those Elders … subsequently got vaccinated by the mobile teams,” Spencer said, noting that had only been possible due to the extra capacity provided by the volunteers.

At the NSW Inquiry, Malouf also called for greater engagement with Corrective Services NSW, particularly given that it was a COVID-positive man who had sparked the western NSW outbreak after being bailed from Bathurst jail.

“Our ACCHOs don’t have a foot  in corrective [services],” he said. “If we were to have access to the health facilities, then we know that the continuum of health for our mob in the correction centres would be continued back to the ACCHO sector,” he said.

Malouf said it was also unclear who was in charge of the vaccine rollout in prisons, and said ACCHOs would be “more than happy to step up to the plate”.

“But again, it would be important for the Health Minister as well as the Corrective Services Minister to sit down with us to have those meaningful conversations.”

Aboriginal communities across Australia must be safe before we open up

See our stories about Aboriginal and Torres Strait Islander health.

PrevPreviousWhy we should be concerned about a secretive National Cabinet
NextHow data detectives, wastewater sleuths, and mystery trackers are aiding Victoria’s COVID battleNext