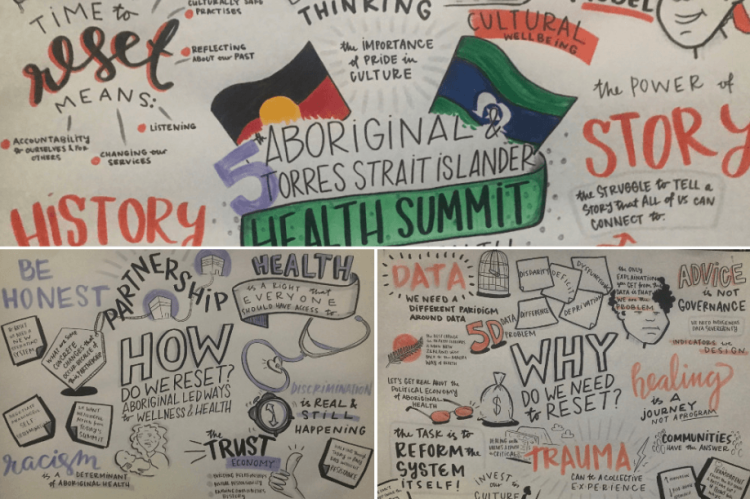 Aboriginal health is a story of Truth, Power and Love – but it’s no fairy tale

Co-hosted by the NSW Ministry of Health’s Centre for Aboriginal Health and the Aboriginal Health & Medical Research Council of NSW (AH&MRC), the event brought together Indigenous and non-Indigenous leaders, from government and non-government sectors, and from policy, research and practice areas across health and health care. 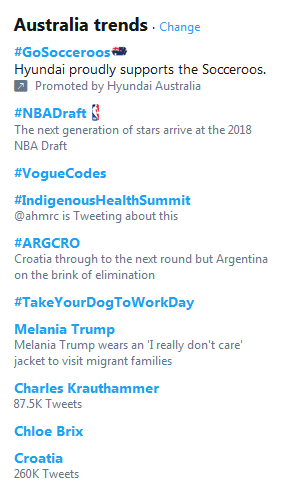 Its focus on finding the ways to “reset” Aboriginal and Torres Strait Islander health through self-determination and privileging Indigenous voices had the event hashtag #IndigenousHealthSummit trending nationally throughout the day.

In this comprehensive wrap below, Summer May Finlay – a Yorta Yorta woman, public health researcher and Croakey contributing editor – reports for the Croakey Conference News Service on the main themes that emerged and the ways ahead.

Don’t miss also this post (to come) of her video interviews with presenters and panellists from the Summit, plus some Twitter highlights (and selfies). See more tweets at the bottom of this post too.

What’s required to reset the approach to Aboriginal health? 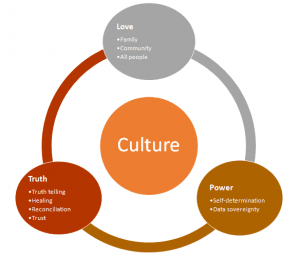 Through varying keynotes and panel presentations, power, truth and love were all discussed through an Aboriginal and Torres Strait Islander lens.

Power was a persistent and dominant theme. Power of the majority to maintain the status quo. Power where people other than Aboriginal and Torres Strait Islander people made and make decisions affecting us and we are merely consulted. Power in deciding what information is collected about us and how it’s used.

We heard how that power plays out in the health system and in individual people’s lives daily. Throughout the day, Aboriginal and Torres Strait Islander people, many working at senior levels in the health and research sectors, recounted personal experiences of poor treatment and care in the health story or those of people they know. They all agreed that the sub-standard care and treatment was driven by racism: individual and institutionalised.

Federal Indigenous Health Minster Ken Wyatt‘s announcement at the Summit of an expert panel to “investigate and identify barriers faced by First Nations people needing kidney donations” was a powerful illustration of how the system is skewed against us.

This national inquiry is driven by the evidence that Aboriginal and Torres Strait Islander people with chronic kidney disease are more than three times less likely to receive a donor kidney than non-Indigenous patients, and nine times more likely to be reliant on dialysis. 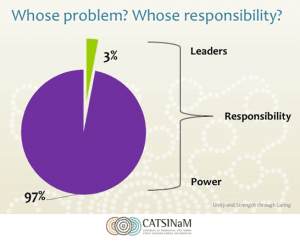 The responsibility lies with them to share power so Aboriginal and Torres Strait Islander people can lead, she said.

Mohamed described the current decision-making systems, i.e. Governments and other bodies which are the current “operating system” as “a colonial apparatus”, in which we are constantly described in deficit and therefore viewed as the problem.

It’s a system and perspective that was famously rejected by Rosalie Kunoth-Monks on ABC TV’s Q&A, when she declared: “I am not the problem”, a sentiment echoed through the Summit discussions.

“The  system needs to reflect on itself; it needs to problematise itself, not us,” Mohamed said, calling for recognition from those in power that the current system is the problem and that there is s a “fundamental need to redistribute power”. 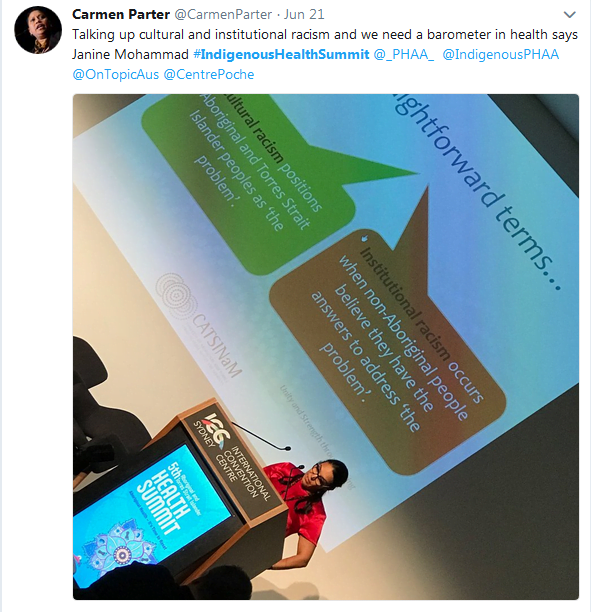 He said the voices of Aboriginal and Torres Strait Islander people are often ignored or drowned out by the weight of the 97 per cent of non-Indigenous people. This is either intentional or unintentional but both are products of past and ongoing colonisation, he said.

Self-determination is what is needed, and is not something that government “do for us” but rather something they should “give us”, he said. “Government’s role is to get out of the way”, he said.

Phillips said Aboriginal and Torres Strait Islander people should not be playing the role of consultants in these processes – which only served to maintain the power imbalance – but should be in the decision-making seat, directing how and where the money is spent.

Pro Vice Chancellor Maggie Walter from the University of Tasmania agreed, saying she no longer agrees to be on advisory committees because “that’s not voice” and it also maintains the power of “the 97 per cent”.

She believes that advisory committees are “so 1980s” – stemming from the mentality that things should be  done “for” or “to” Aboriginal and Torres Strait Islander people rather them being led by us or at least done “with” us.

Walter is a champion of Indigenous data sovereignty, a growing international movement which calls for Indigenous people to determine what data needs to be collected, how it’s analysed and how it’s used.

She said Aboriginal and Torres Strait Islander people are conflicted by a “data paradox”, where there is both “too much and not enough (data) at the same time”. We are “saturated” with studies looking at the “prevalence of disease”, but have little data on other issues, such as how many people are from each Aboriginal nation or the extent to which racism impacts our health, she said.

What’s needed to address that, she said, is to have Aboriginal and Torres Strait Islander people leading the research so they can determine what data needs to be collected to assist our communities and how it will be used. 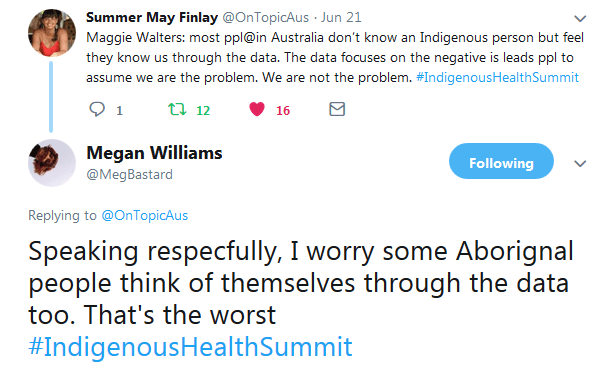 Pat Turner, CEO of the National Aboriginal Community Controlled Health Organisation, was unable to attend the event due to ill health but has subsequently published her speech. She also called for self-determination.

“Why are the Aboriginal self-determination concepts accepted only by parts of our machinery of federal government rather than as a whole of government planning principle? The Feds pick and choose what they like, what they fund and how they access our Indigenous data!” she said.

He said he knows this can be done because 87 per cent of projects funded by the Lowitja Institute are led by Aboriginal and Torres Strait Islander researchers, compared to a fraction of that from National Health and Medical Research Institute funded projects on Indigenous health.

“I don’t buy the ‘reset’, we need a new operating system,” he said.

There was universal support from presenters on the call in the Uluru Statement of the Heart for a Makarrata truth telling commission, underscoring growing calls in mainstream health for the Federal Government to reverse its rejection of the Uluru Statement, on health grounds alone.

The Summit heard from multiple speakers that truth-telling is a process where individuals, families and communities can share how the actions of governments and non-state actors have negatively affected them. It is a process many colonised countries, including Canada and South Africa, have opened up to with their Truth and Reconciliation Commissions.

Truth-telling would be an opportunity for this country to recognise and acknowledge past wrongs so all Australian can heal and build trust.

Walter  said it’s not just Aboriginal and Torres Strait Islander people who need to heal. She believes that non-Indigenous people have been sold a lie, that the impacts of colonisation don’t affect them but they do. Phillips agreed:

In relation to healing, it’s always talked about as if the mistreatment has happened in the past. It’s also happening now. It’s not only Aboriginal people who need healing. We have a system and a history which affects us all.”

Indigenous Health Minister Wyatt talked about the role of family, love and culture and how they must be at the forefront of the early years of learning and acquisition of knowledge .

“Our mothers and fathers, uncles, aunts and grandparents – our families are the first protectors of our children, the warriors for their welfare and their future,” he said.

As children – love, certainty and protection nourish our bodies, brains and cultural souls.”

Wyatt said these imperatives were at the heart of the First 1000 Days project led by Professor Kerry Arabena from the University of Melbourne, who facilitated the Summit. Arabena told the event:

From the audience, Rod Little, Co-Chair of National Congress of Australia’s First Peoples, said love is never mentioned or even considered in government policies, and yet love was the critical reason Aboriginal and Torres Strait Islander people seek to work with and advocate for our mob.

A panel on how to reset the agenda provided a case study on how Aboriginal and Torres Strait Islander people and organisations can and do lead the way, and work well in partnerships with non-Indigenous health agencies and leaders that recognise that need and can act with honesty and integrity.

Watch this interview with them about what makes their partnership successful.

Non-Indigenous journalist Dr Jeff McMullen, who helped close the day’s discussions, spoke of how he came to realise that the health system was actually hurting Aboriginal and Torres Strait Islander people. He would see the same story of sub-par treatment and care being repeated, and recognised that it wasn’t our people who were the problem but the health care system.

The day ended with a call for more than a reset. It called for a significant update of the operating system. An operating system which relinquishes power to Aboriginal and Torres Strait Islander people, communities and organisations.

And there was a call for the Uluru Statement from the Heart  – which is all about power, truth and love – to be supported by all organisations present.

The way ahead: some pointers and pathways 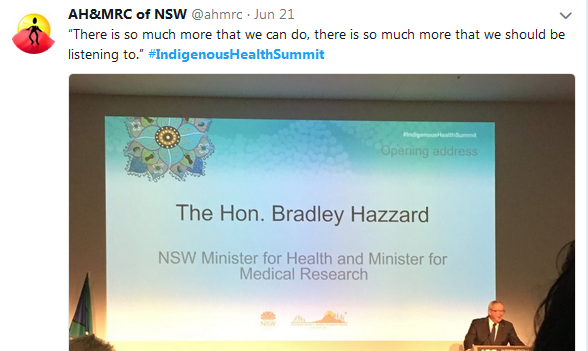 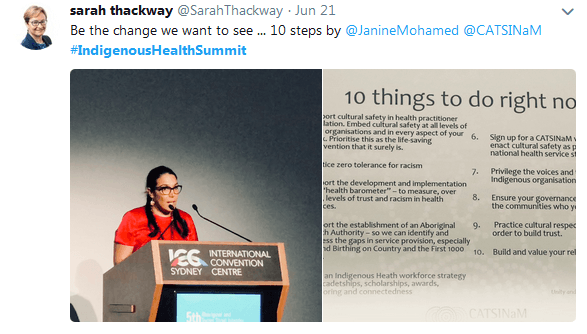 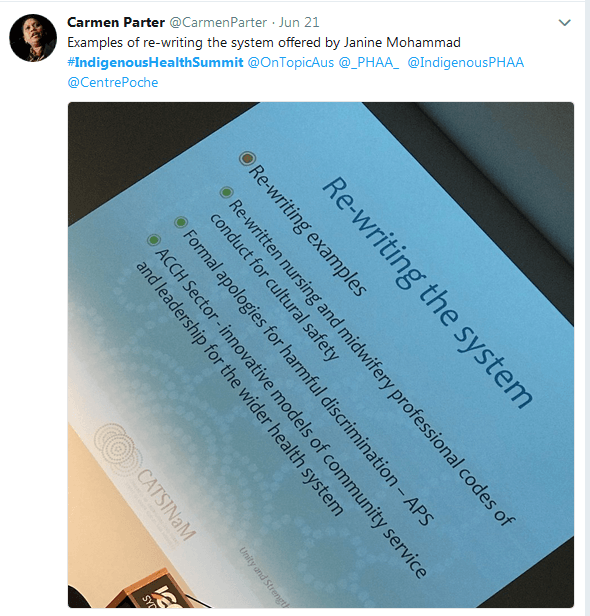 You can bookmark this link to follow Summer May Finlay’s coverage of the Summit.

PrevPreviousFunding to end this week for acclaimed Indigenous-led resilience program in Perth
NextGains, gaps and goals: taking stock and building momentum at the National Immunisation ConferenceNext