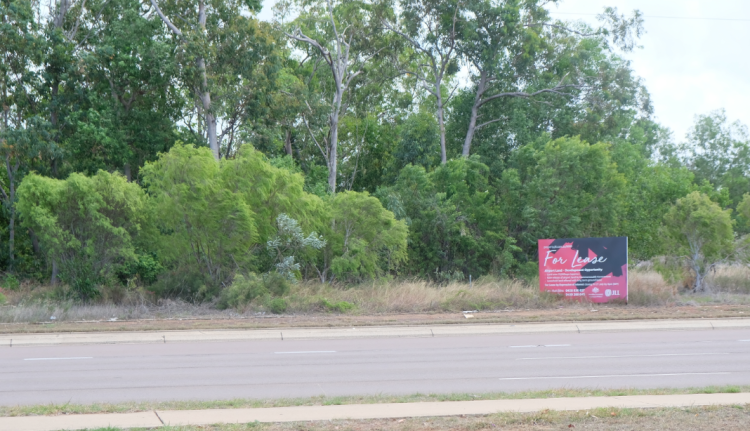 In a statement, the groups express their fear that new laws being debated this week will open up the possibility for Woolworths, the owner of Dan Murphy’s, to build one of the largest bottle shops in the country within walking distance of three dry Aboriginal communities — Bagot, Kulaluk and Minmarama.

Earlier this year Croakey published a plea from Helen Fejo-Frith, a Bagot Aboriginal Community Elder, urging the Chairman of Woolworths to “have a heart” and stop trying to build the store close to her dry community.

The NT Government announced on Tuesday it would introduce legislation this week “to cut red tape and speed up the decision making” on liquor licences.

In the article below, AMSANT CEO John Paterson warns on the health and social costs of the move, which risks reversing big efforts to date to tackle the many harms from alcohol.

When the Liquor Commission knocked back the Woolworths-owned Endeavour Drinks Group’s application to build one in 2019 because the proposed location was too close to three Aboriginal communities, he called it a ‘kick in the guts,’ declaring: “Territorians want a Dan Murphy’s. I want to see a Dan Murphy’s in Darwin.”

In order to – once again –  help the multi-billion dollar corporate entity to achieve its aim of building a huge bottle shop in the Top End city, the Chief Minister now seems prepared to undermine the institutions and processes set up as part of his own government’s extensive and progressive alcohol reforms, although he’s now toned down his enthusiasm a little, saying all he wants is a quick decision one way or the other.

Since it was initially elected in 2016, Gunner’s Labor administration has implemented a large number of very good alcohol policy and legislative reforms.

These include:  a re-introduced Banned Drinker Register (previously dumped by the Country Liberals), a Minimum Unit Price or floor price, of $1.30 per standard drink, and Police Auxiliary Licensing Inspectors (PALIs) who check ID at bottle shops in the regional towns of Alice Springs, Tennant Creek and Katherine – but not in Darwin  –  to ensure that people from alcohol restricted, or ‘dry’ areas do not buy take-away grog.

We have consequently seen very significant reductions in alcohol-related assaults and emergency department presentations. But it’s a long, hard road to success in population health.

The Government also commissioned an independent review of alcohol-related policy and legislation, headed by the respected former NT Chief Justice Trevor Riley, and has implemented almost all of its recommendations.

As a result, and following community and business consultation, the Territory now has, among other things, a new, modernised Liquor Act, and an independent Liquor Commission, chaired by long-time Territory lawyer and former head of the DPP, Richard Coates.  Other Commission members include experienced legal, health and community representatives.

So, things have generally been looking up on the grog front, with the Minister for Health and for Alcohol Policy, and former Attorney-General Natasha Fyles leading the charge – at least until this week.

The Government had rightly done away with the old Country Liberal’s system of decisions being made by the Director of Licensing, whose job is now to deal with complaints and monitor compliance with the Liquor Act.

To now reinstate the Director of Licensing’s decision-making powers to rush through two applications appears desperate and cynical.

The fact that the Chief Minister has tried to justify it on the basis of the Territory Economic Reconstruction Commission’s recommendation that all NT Government decisions should be made within 30 days or less, undermines any claim to be acting on the basis of evidence or concern for proper process or the welfare of the community.

There is five-year moratorium on new take-away liquor licences in the NT, due to the high density of such licences. This will continue until at least August 2023, and may go for longer, depending on a review.

Woolworths wants to build an enormous Dan Murphy’s close to the Darwin Airport, using its existing BWS licence from a small Stuart Park outlet.  The location is also near three local Aboriginal communities: Bagot, Kulaluk and Minmarama, separated by a busy, six-lane arterial road.  It started looking at sites in 2015.

In late 2016, the NT Government decided to restrict the sales floor space for take-away liquor stores to 400 metres, and Woolworths commenced court action against this move.  This ceased when the NT Government repealed the relevant legislation the following year.

Woolworths applied to substitute the (as yet unbuilt) new premises in 2018. There were 17 objectors, including AMSANT, the three communities, Danila Dilba Health Service, the NT Council of Social Service, the Public Health Association of Australia’s NT Chapter, and the Foundation for Alcohol Research and Education (FARE).

In September 2019, the Liquor Commission rejected Woolworths’ application on the basis that it was too close to the three Aboriginal communities. It also calculated that the new outlet would sell 48 times as much liquor as the old BWS. There is credible research about the deleterious effects of what are known as ‘big box’ liquor outlets.

Woolworths appealed to the NT Civil and Administrative Tribunal (NTCAT). It found that there could be no substitution to premises that did not exist. The location argument was not the issue for NTCAT, so Woolworths lost again, albeit on a different point.

Not wanting to see Woolworths stymied, the Gunner Government offered the corporate giant some relief. Early this year, it amended the still relatively new Liquor Act to permit the substitution of premises even if not yet constructed, and also allowed for the application to go back to the NTCAT for a review on the merits, and not to the Liquor Commission.

This was to happen in June. The hearing has been delayed partly by COVID 19, but also largely by Woolworths, which recently sought an adjournment to 2021.

Coming to the corporate rescue

After indicating earlier this week that there might be more assistance for Woolworths, the Chief Minister kept his word and produced it on Wednesday in the form of rushed amendments to the Liquor Act. Once passed, these will effectively instruct the Director of Licensing to make a decision on the Dan Murphy’s application within 30 days.

There need be no hearing and there can be no new objections.  The current NTCAT hearings are terminated and NTCAT may not review decisions made under these new amendments. There is no role for the Liquor Commission in this determination.

The Director will not even have to satisfy himself that the applicant has met the usual public interest and community impact objectives listed in s49 of the Liquor Act in order to grant the licence.

And as a further bonus for Woolworths, it will be allowed to propose another location for its Dan’s mega-store. No doubt it has an alternative block of land in its sights.

So, with the stroke of a pen, the way is paved, proper process is ignored, the Liquor Commission and the NTCAT are disregarded, and the decision-making power is handed temporarily to a bureaucrat who would normally have nothing to do with considering complex licence applications.

The amendments were introduced, somewhat ironically, by the Minister for Small Business, Paul Kirby. What Woolworths has to do with small business is not apparent apart from a business model designed to destroy small competitors. Remaining on the sidelines have been Minister Fyles, and the recently-appointed Attorney-General and Minister for Aboriginal Affairs, the Member for Arnhem, Selena Uibo.

The cost of these amendments could be high.

During COVID, with the increase in Centrelink payments, NT police had to ask the Director of Licensing to use his emergency powers to disallow sales to people from remote Top End communities because of large amounts of sly grog being sold at extortionate prices. We don’t need a ‘big box grog barn’ in Darwin, wherever it is located.

We are still battling high levels of consumption and its consequences, despite the very good reforms to date. These problems have a long history, and we still have a fair way to go.

The Labor Government’s use of rushed, circumventing legislation degrades the integrity of the NT Government, and risks setting an appalling precedent.

It creates a perception that if big corporations don’t like your laws and the institutions set up to administer them, they can enlist a willing government to temporarily, or maybe even permanently, cast them aside. 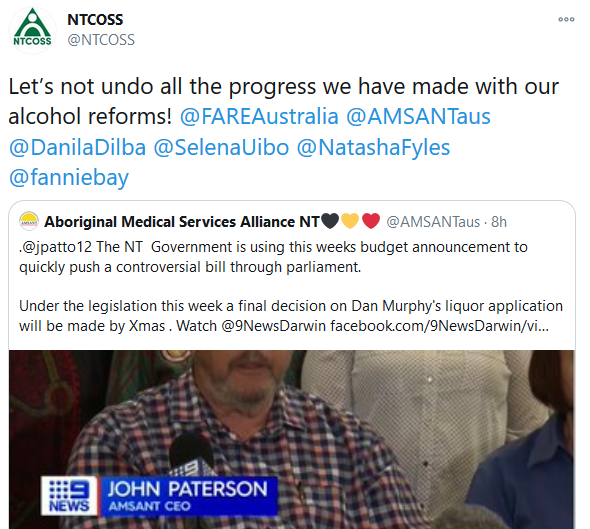 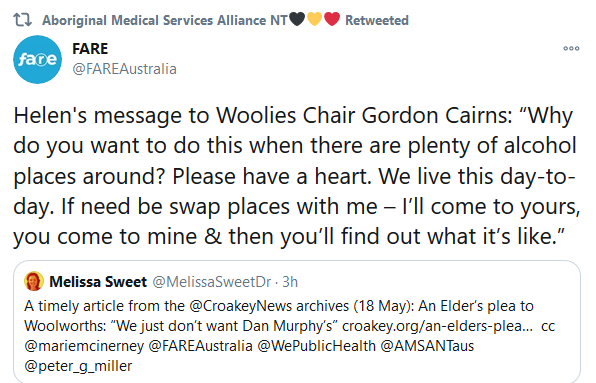