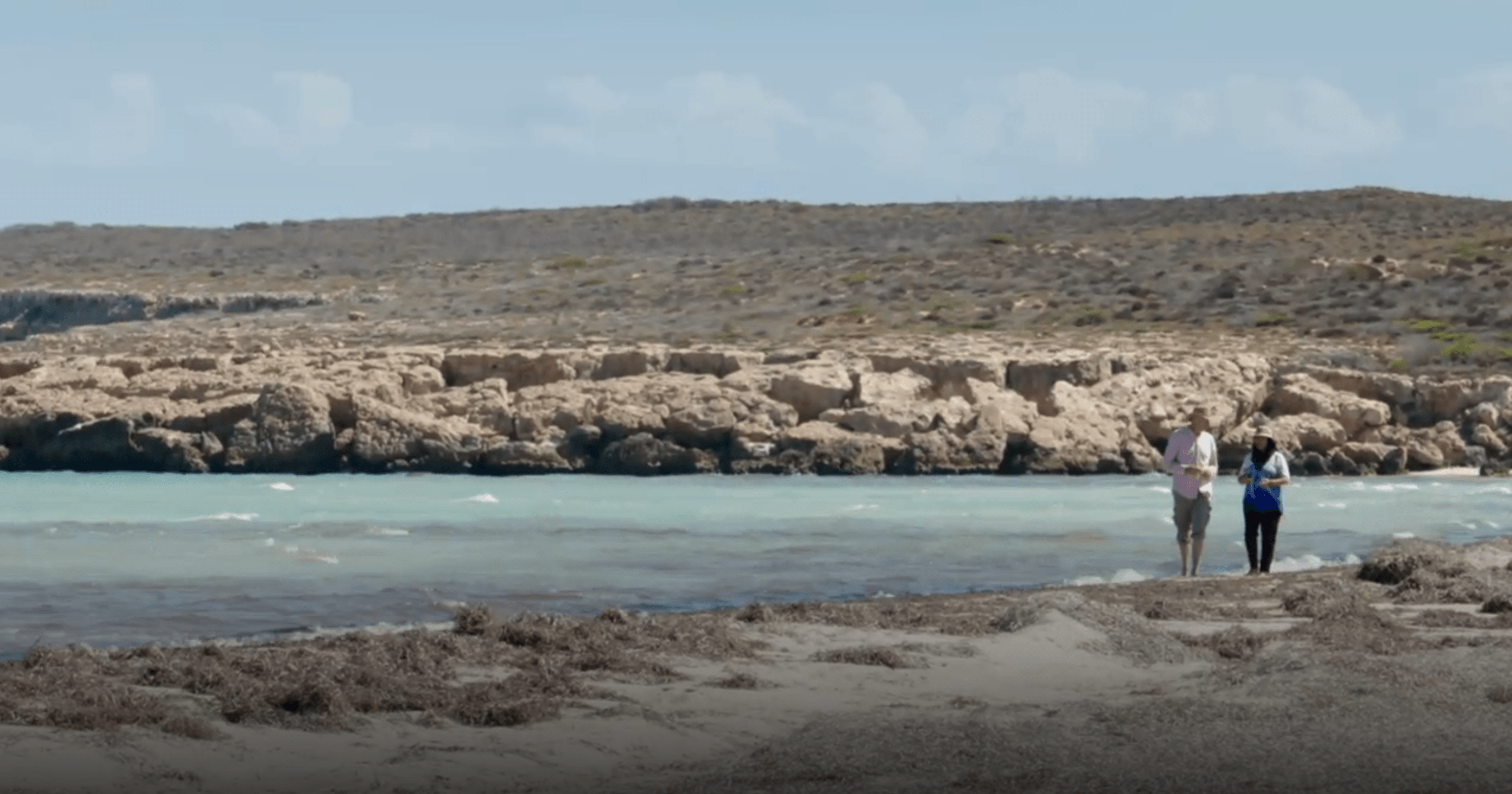 Acknowledge the brutal history of Indigenous health care – for healing

In March, a small group of people joined the musician, environmentalist and former politician Peter Garrett on a deeply moving journey to a remote island, about 58 kilometres off the coast from the Western Australian town of Carnarvon.

For Garrett, the boat ride was retracing travels that his grandmother had made almost a century earlier, en route to Dorre and Bernier islands, where Aboriginal people were incarcerated on medical grounds between 1908 and 1919.

Part of the journey was filmed for the SBS documentary series, Who Do You Think You Are?, which screened on Tuesday night. The episode revealed some of the history of Garrett’s grandmother, who worked on the islands as a nurse. Peter Garret retraces the trip his grandmother made. (Screenshot/Who Do You Think You Are/ SBS)

For Kathleen Musulin, a Malgana/Yawuru woman living in Carnarvon and a member of the Carnarvon Shire Council lock hospital memorial working group (and co-author of this article), the trip to Dorre with Garrett was also an opportunity to connect with ancestors, particularly her great grandmother, who was one of hundreds of Aboriginal people imprisoned on the islands, many of whom died there.

The stated reason for the removal of Aboriginal people to “lock hospitals” on Bernier and Dorre islands was “venereal disease”, though many questions surround this non-specific diagnosis, particularly given the role of police and non-medical people in diagnosing and removing people, often in chains and using force. A plaque remembering those who were imprisoned and who died on the islands. (Memorial at Dorre Island, Author provided)

Lock hospitals were an invention of the British Empire. In the 1800s, they were used to confine women in English garrison towns who were thought to be engaged in sex work and to have venereal disease, under a series of Contagious Diseases Acts designed to protect the health of soldiers rather than the prisoner-patients.

Following vocal opposition, lock hospitals were abandoned in Britain, although similar measures continued elsewhere in the British Empire into the 20th century. In Australia, lock hospitals for “common prostitutes” existed in Melbourne and Brisbane into the 1900s. In the early years of the Bernier and Dorre lock hospitals, inmates were subjected to invasive interventions, while in latter years there was little medical care. The facilities recorded extremely high death rates, as did a lock hospital that operated from 1928 to 1945 on Fantome or Eumilli Island in the Palm Island group near Townsville in Queensland.

The removal of people to Bernier and Dorre islands was occurring at a time when authorities sought to prevent sexual relationships between Aboriginal women and white men as well as so-called “Asiatics”, as enacted in the WA Aborigines Act of 1905. As historian Dr Mary Anne Jebb has observed in an unpublished manuscript, this legislation:

…institutionalised Aboriginal women as immoral and intimacy between races as a problem which needed to be stamped out.

The lock hospitals were also interlinked with other traumas of colonisation, including the removal of Aboriginal people as prisoners or witnesses (mainly to do with the killing of stock), and the removal of children (some of the travelling inspectors who took away people with disease also took children). It was a time when senior doctors considered neck-chaining of Aboriginal people, often for prolonged periods, to be “humane”. The lock hospitals were interlinked with other traumas of colonisation. (Library of Western Australia)

Around the time of the lock hospitals, Aboriginal people in WA were active in drawing public and political attention to wide-ranging injustices, including police brutality, their exclusion from schools and general health services, and other policies of segregation.

While the early decades of the 20th century were marked by concern about venereal diseases in the wider population, the policies and practices for non-Indigenous people stood in stark contrast to treatment of Aboriginal and Torres Strait Islander people. In 1911, a meeting of Australasian doctors recommended that general hospitals and dispensaries, rather than lock hospitals, “should provide the necessary accommodation for venereal cases”. When many states introduced compulsory notification and treatment for venereal diseases for the general population following the first world war, non-Indigenous patients were provided with education and free treatment. By contrast, the lock hospitals of Queensland and WA provided penal rather than therapeutic conditions.

As a Yamaji researcher Dr Robin Barrington has observed of the Bernier and Dorre lock hospitals, they were:

At the time, even authorities acknowledged that Aboriginal people saw the Bernier and Dorre lock hospitals as penal institutions. In 1909, newspapers reported WA’s Chief Protector of Aborigines, Charles Gale, stating they were seen “as a sort of gaol”.

It was not only the island confinement that was punitive; people often faced traumatic long journeys, on foot and by ship, as well as long periods in prisons or other lock-ups awaiting transport to the islands. Garrett says it would have been terrifying to be sent to to Dorre Island. (Screenshot/Who Do You Think You Are/ SBS)

In an interview some weeks after his visit to Dorre Island, Garrett told me (Melissa Sweet) that it had made him appreciate how terrifying it would have been for those Aboriginal people taken there. He compared the lock hospitals to a form of “gulag”, and described the island’s harsh landscape.

Even by Australian standards, it is remarkably barren, remote, inhospitable and, to be there for weeks on end, never mind years on end, yes, it really brings you up with a start… You can’t fail but to come away with a very strong feeling of loss and of unhappiness and of confusion.

During his short visit to Carnarvon, Garrett was struck by the lack of local acknowledgement for this internationally significant history. He noted, for example, its absence from a large new historical display at the town’s landmark One Mile Jetty, from where many inmates and staff departed for the islands. For Kathleen Musulin, visiting Dorre was a deeply moving and spiritual experience, which is part of a bigger journey to increase public awareness and understanding of the lock hospitals’ histories. Many Aboriginal and Torres Strait Islander people want greater public acknowledgement of the Bernier, Dorre and Fantome island lock hospitals and their traumatic impacts, according to findings from my (Melissa Sweet’s) PhD research.

This is seen as important for healing and justice, with interviewees wanting the wider Australian community to know “what Aboriginal people went through”. Efforts are now underway, through a Carnarvon Shire Council working group, to develop memorials to pay respects to those taken to the islands. Peter Garrett and Kathleen Musulin on Dorre island. (Screenshot/Who Do You Think You Are/ SBS)

Knowing and acknowledging this history is particularly important for health systems and professionals, given that current Australian health dialogue supports the development of culturally safe services and practices, and this requires an understanding of one’s own profession’s historical complicity in such events.

Learning from history opens the way to moving forward with respect in health professions, to provide services that will ensure better health outcomes for Aboriginal and Torres Strait Islander people, many of whom continue to experience adverse and traumatising experiences with health care.

The lock hospitals are part of a wider history of medical incarceration, as exemplified by Fantome Island, which also housed a leprosarium for Aboriginal and Torres Strait Island people from 1940-73. These histories remain very present in the memories and lives of many families on Palm Island.

These and other episodes of medical incarceration of Aboriginal and Torres Strait Islander peoples can be seen as archetypal examples of the role of health care professionals and systems in colonisation, contributing to intergenerational traumas.

The Australian Psychological Society recently issued an apology for the profession’s role in contributing to the mistreatment of Aboriginal and Torres Strait Islander people, including its failure to advocate on important matters such as the policy of forced removal, which resulted in the Stolen Generations.

Far more could be done across health systems to acknowledge the wider histories of harmful health care policies, systems and practices that institutionalised, excluded, segregated and harmed Aboriginal and Torres Strait Islander people. Acknowledgement is one important step towards healing and reparation.

* Our next article will investigate what can be learnt from the extensive newspaper coverage of the lock hospitals.

It is re-published at Croakey as part of our Acknowledgement series – read the other articles in the series here.