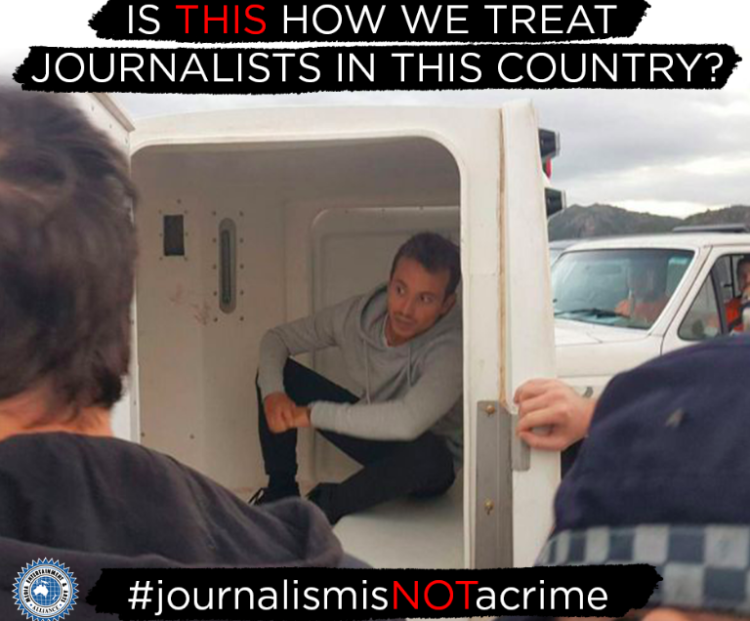 From the MEAA's Facebook page ahead of the charges being dropped by Queensland police. Photo supplied by Frontline Action on Coal

Queensland police have decided to drop charges against four French journalists for trespass while they were filming an anti-Adani protest for a documentary for French TV.

The case has raised major concerns for public interest journalism, with the Media Entertainment and Arts Alliance (MEAA) describing the police action as “heavy‐handed and unworthy of a healthy functioning democracy that upholds press freedom”.

The arrests came on top of recent raids on the ABC and a News Corporation journalist that have also attracted international attention and prompted urgent calls for law reform to end the criminalisation of public interest journalism in Australia.

In response, the Senate this week voted in favour of an inquiry into the freedom of the press and whistle-blower protection to be chaired by Greens Senator Sarah Hanson-Young.

It’s the second parliamentary inquiry into media freedom underway after Labor and the Greens argued that an investigation by the Liberal-dominated Parliamentary Joint Committee on Intelligence and Security does not go far enough.

“This week’s arrest of four French journalists highlights how badly we need to rethink press freedom in Australia,” Hanson-Young said.

“The ability of citizens to speak truth to power must be maintained and that is why whistle blowers must be protected and journalists allowed to do their job,” she said.

The Senate agreed that the following matters be referred to the Environment and Communications References Committee for inquiry and report by December 2019:

Journalist Hugo Clément, his crew and several protesters were arrested on the railway line at the entrance to Adani’s Abbot Point coal-loading facility while filming a protest on Monday.

Remarkably, their bail conditions banned them from being within 20 kilometres of Adani’s Carmichael mine site and less than 100 metres from any other Adani site.

In a letter to Queensland Premier Annastacia Palaszczuk before the charges were dropped, the MEAA urged her intervention, saying the arrest, detention, charges and bail conditions were “an outrageous assault on press freedom”.

It was “egregious” for journalists to be subject to a total exclusion zone that curtailed their right to report and infringed on the public’s right to know, it said.

At a time when Australia’s reputation as a nation that upholds press freedom is already damaged, the actions of Queensland Police have only gone to attract more unwelcome attention.

The actions of Queensland Police were heavy‐handed and unworthy of a healthy functioning democracy that upholds press freedom.”

Queensland Police confirmed the decision to drop the charges on Thursday in a statement, saying they had “reviewed the circumstances” surrounding the arrests of the four French nationals, and a 28 year old Victorian man.

“As a result, the QPS will withdraw all charges,” it said, although noted that charges would still proceed against two Victorian women involved in the protest.

Guardian Australia reported that the breakthrough followed the intervention of the French Ambassador to Australia, who had made direct representations to Queensland officials on behalf of the four men.

With the arrests raising serious concerns about over-reach by police, the MEAA said journalists should be allowed to carry out their duties reporting on a matter of public interest without being arrested and charged.

It said it understood the crew did not know they were trespassing on a railway line that was private property while they were filming the protest, and when approached by police had duly presented their French Government‐issued Carte d’identité des journalistes professionnels that clearly identifies them as professional journalists.

According to the MEAA, their press cards were ignored, with one of the police saying to them: ‘Journalists should know better.’.

They were told they were obstructing the railway and were then arrested, placed in handcuffs and put into police vehicles.

The French journalists say they were not asked to move on. They say they did not refuse to comply with any requests made by the police… because the police made no requests. They were then detained for seven hours and were subsequently charged with trespass.”

As one of the French journalists has subsequently explained: “In France you have right to film in the streets … even though you film the protests you are not part of the protest yourself, you are a journalist, you do your job and make the report, that’s just life.”