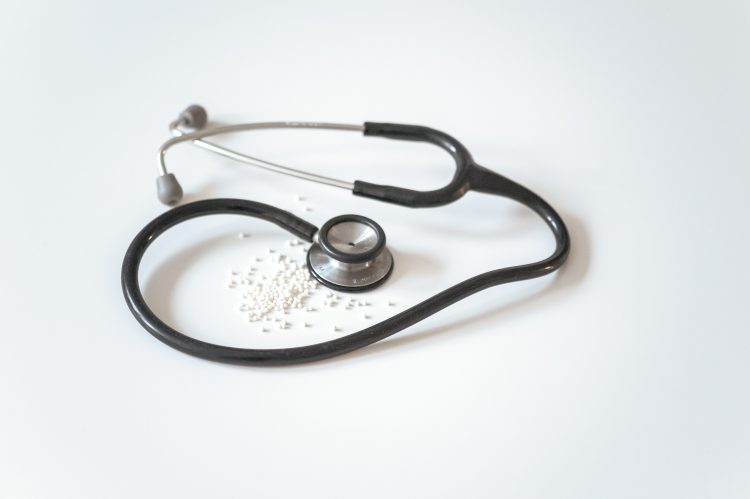 The Voice of Australian Consumers Report provides a timely and comprehensive look at Australians’ interaction with the health system over 12 months during the pandemic – a time when resources were stretched and the health workforce under incredible pressure.

It’s a great credit to the health workforce that the survey found consumer satisafaction with the system has soared.

But, as Cate Carrigan reports below, many Australians are still struggling to afford healthcare and we need person-centred and value-based care, access without financial hardship, and a workforce trained for the future that is digitally-enabled.

Affordability, discrimination and other barriers for people with chronic illness and those from disadvantaged backgrounds remain hurdles to healthcare access, despite a big boost in confidence in the Australian health system, according to the latest health consumer sentiment survey.

It found: 14 percent of Australians with chronic conditions could not pay for healthcare or medicine because of cost; 24 percent of respondents did not fill a prescription or omitted doses of medicine – with over a third citing cost as the reason; and nearly a third felt discriminated against or disrespected in healthcare settings. 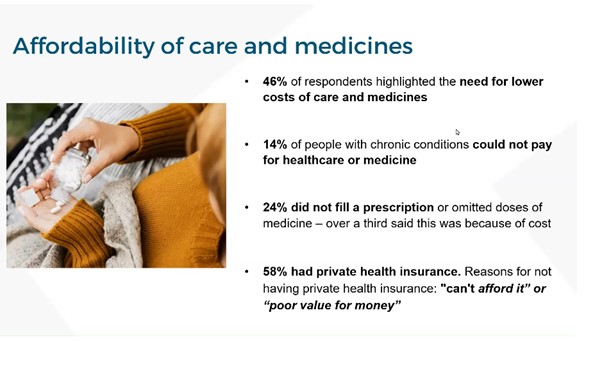 Many in regional and remote Australia wanted more medical professionals in their communities, with 55 percent saying they needed more doctors, nurses and health workers.

Other key findings included high levels of satisfaction with telehealth services, with 71 percent of users saying it was as good or better than face-to-face; high approval for COVID-19 testing and vaccination services; and concern with residential aged care facilities, with 23 percent of respondents believed RACFs were bad or very bad – up from 17 percent in 2018.

More than 5,000 Australians aged 18 and over were included in the October 2021 survey – conducted at the height of the COVID-19 outbreak – which gauges opinions on the health system across the country and offers a unique resource to inform policy and practice.

CHF Chief Executive Officer Leanne Wells said the latest results show consumer confidence in Australia’s healthcare system has risen by 30 percent since the last survey in 2018 despite the massive pressures placed on the system by the COVID-19 pandemic.

But the survey also showed that more must be done to ensure the system remains affordable and accessible, particularly for disadvantaged cohorts and those with chronic health conditions, she said.

“It is crucial that consumers are central in the design of health policies and programs,” she said in a statement.

“As the largest survey of its kind in Australia the findings are an important tool for all governments, policy makers and healthcare providers as they build on learnings from the pandemic and address systemic gaps in the healthcare system.”

Federal Health Minister Greg Hunt said the single most important result was the growth in the level of satisfaction with the health system – from 67 to 84 percent, saying it was a testament to the hard work of health workers during the pandemic.

But he said the job’s not done, with more work needed in rural and remote regions and also to address the number of Australians saying they had been disrespected or discriminated while receiving healthcare.

Co-chair of the NSW Clinical Excellence Commission Consumer Council, Laila Hallam, wasn’t surprised at the growth in confidence during the pandemic, saying the country’s health departments provided much needed leadership over the last two years.

Hallam told a webinar to launch the report that gaps found in waiting times, availability, and upfront and out-of-pocket expenses had been exacerbated over the past two years by a health system distracted by COVID-19.

It would be some time before the true impact on people who’d missed out on timely care or was known, she said.

AIHI founding director Professor Jeffrey Braithwaite said the results showed that while many are satisfied with the health system, it’s not helping those that need it most.

The survey found that accessing needed care during the evening, on the weekend or during holidays without going to a hospital emergency department was difficult for a significantly higher proportion of respondents in 2021 (34.3 percent) compared with 2018 (23.7 percent).

An even greater proportion of people with chronic conditions found accessing care out of hours difficult (36.0% in 2021 and 28.1 percent in 2018).

Another issue highlighted was discrimination and disrespect in healthcare settings, with 81 percent of Aboriginal and Torres Strait Islander people, 50 percent of those from non-English speaking backgrounds, 33 percent of people with chronic conditions, and 23 percent of people overall reporting such incidents in the last 12 months.

Associate Professor Yvonne Zurynski, from the AIHI and the PCHSS, who co-designed the survey with consumer researchers from CHF, said the results raised important issues about equitable treatment.

“With 23 percent of Australians experiencing discrimination or disrespect when accessing healthcare, it’s time to ensure we implement effective cultural competency training for all who work in the system.” 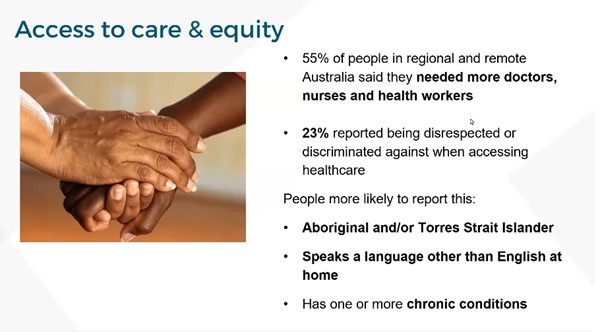 The report also found rates of psychological distress rose from pre-pandemic levels, with 24 percent of people experiencing serious psychological distress, and rates higher for those with previous mental illness and those under 44 years of age living in NSW and Victoria – the states hardest hit by COVID-19.

It further found that most experiencing psychological distress accessed received healthcare via telehealth and videoconferencing, with 85 percent reporting satisfaction with the care received.

Professor Ian Hickie, the Co-Director, Health and Policy, Brain and Mind Centre, said COVID-19 had exacerbated mental health conditions and had a particularly hard impact on women and young people, especially those in insecure work or unemployed.

“The out-of-pocket costs in our area, which were very high already, have now got much higher. So we have faced a crisis in surge in demand, and a crisis in inequity,” he said.

There were fundamental structural issues that needed to be resolved: the coordination of care across the country; appropriate use of digital technology – not just telehealth; and the financing to make this happen, he said.

Professor of Health Policy at the Mitchell Institute, Rosemary Calder, said the Australian health system was built on funding through the door activity but not so good at providing care that reached out to those who don’t engage with the system – “those who don’t access it and can’t afford it”.

“Despite the intentions of Medicare we have maintained a financial divide: if you can’t pay you don’t get, and we really have to be blunt about this … we don’t provide universal, equitable, affordable access,” she said.

Looking at challenges for the future, Professor Jeffrey Braithwaite said while Australia prided itself on having a universal health system it was either “treading water or going backwards” on that.

Braithwaite said while the Australia health system was one of the best in the world, it needed structural change to ensure a cohesive system with person-centred and value rather than volume-based care, access without financial hardship, and a workforce trained for the future that is digitally-enabled. 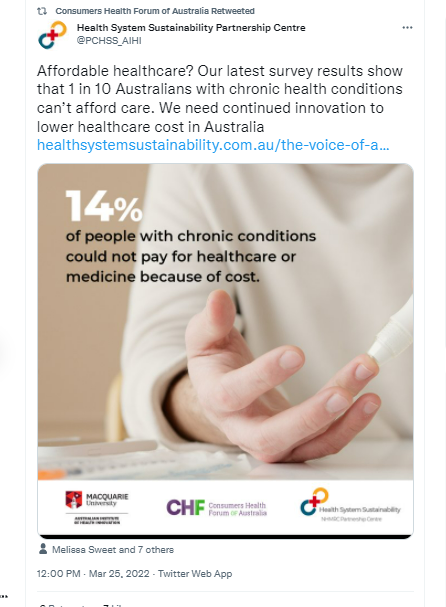 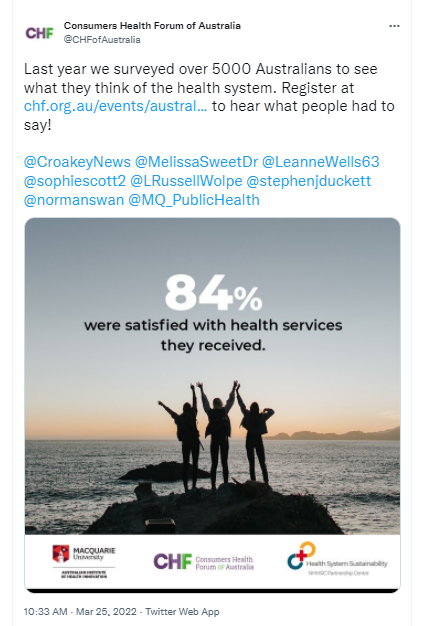 PrevPreviousThe Health Wrap: on budget day, and with an election looming, it’s time to get out the calculators
NextImproving the physical health of people with mental illnessNext