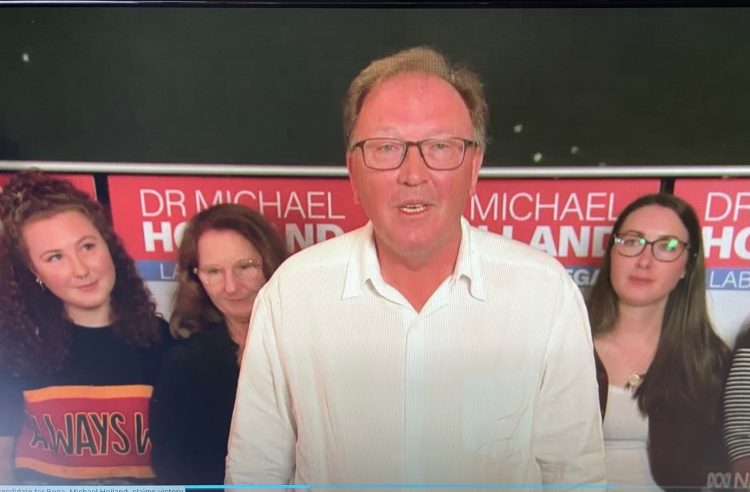 Introduction by Croakey: Dr Michael Holland, a 64-year-old obstetrician and gynaecologist who is set to become the first Labor MP for the New South Wales south coast seat of Bega, has a long history of fighting for better rural health services.

He is also an advocate for fairer housing policy and climate action, having witnessed the impact of 2019-2020 bushfire emergency upon local communities and health services.

Holland brings lived experience of mental health problems to his new role, and has written about his own experiences in a local newspaper (article is behind paywall). He describes having grown up in an environment with family violence and alcoholism. 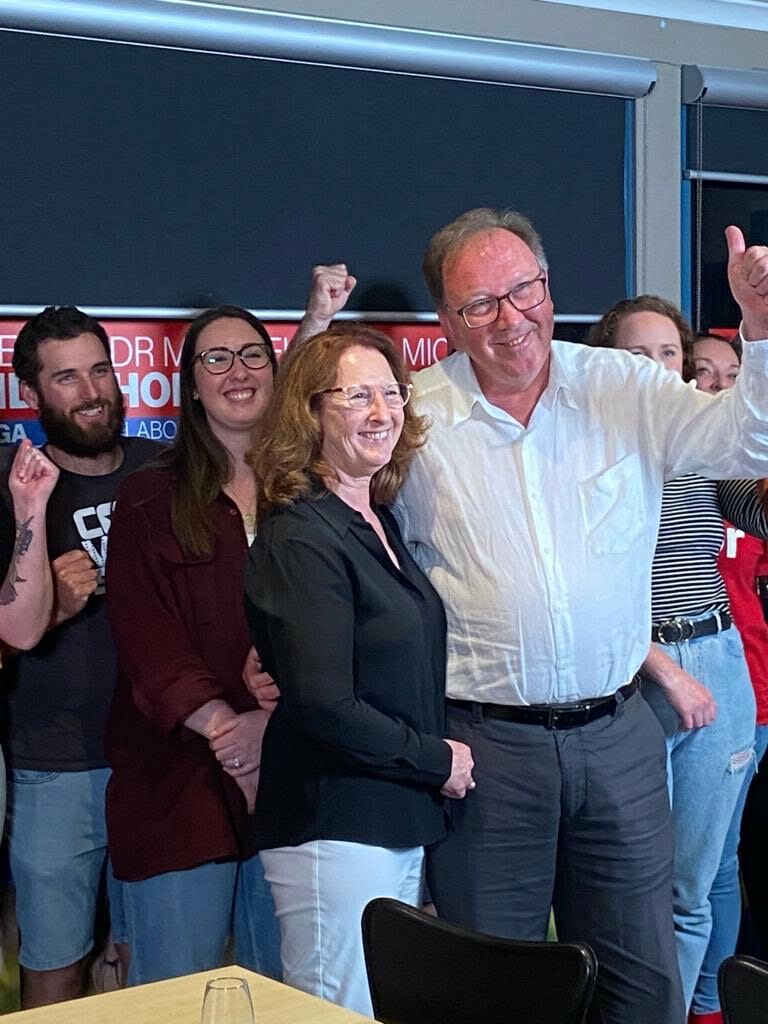 Born and raised in Sydney, he trained in Newcastle and had a private obstetric practice there for ten years before moving to Yuin Country 19 years ago. He and Lyn Holland, a nurse and midwife, have been married for 36 years and have five daughters aged 26 to 36 (one of whom is a nurse), one grand-daughter and another grandchild on the way.

Below is a Q and A with Croakey, conducted early yesterday morning while driving from his home at Turlinjah, south of Moruya, to Bega, “to show solidarity” to nurses and midwives who were rallying as part of state-wide protests.

The phone dropped out several times during the conversation – a reminder, he said, of the importance of better telecommunications infrastructure for rural communities.

We evacuated because we wouldn’t have been able to defend our property. There weren’t enough rural fire services to come to our cluster of homes. I also had to provide a clinical service to the hospital because it was the Christmas/school holiday period and the locum cover had to leave.

So I slept for five nights on the floor of my practice with my wife. We had neighbours bunking in the waiting room for safety, including a neighbour who was paraplegic and in a wheel chair.

The generator didn’t have enough energy to power a CT scanner, we could do an X-ray; we all had to adopt different roles. I had to go to the local hardware store to pick up electrician’s tape to use as coding for triage.

I did a ward round looking for potential vulnerabilities for fire or sparks. We had a very good emergency specialist in the hospital who was familiar with emergency response. She established a very good plan for the hospital; apart from the potential for an outbreak of gastro [due to the conditions where evacuees were camping], a simple multi-vehicle accident would have overwhelmed our hospital.

Q: What health impacts have you seen?

The amount of pollution produced during that bushfire. There is a lingering mental health issue in the community following that trauma. We’re going to be faced with those repeated threats of fire and we’ve had something like seven floods in the two years since the bushfires ended, which I’m sure is a consequence of climate change. The increased number of days of very high temperatures affect the most vulnerable members of our community, the oldest and the youngest. There aren’t good systems for any of those concerns.

Q: What are the key lessons out of the bushfires?

We need to have a plan for dealing with potential disasters, from the health service to public health. These problems will happen again; we have to have plans for coping with them when they occur, including safe community areas. I remember going to the evacuation centre at the Moruya showground during the bushfires and there was no plan, no handwashing facilities.

I’m driving into Cobargo at the moment, one of the hardest hit areas during the fires; they plan to build a multi-purpose community centre that can be used also during disasters as a secure and safe evacuation point, and as a community centre the rest of the time.

We need a response to help the victims of these disasters. A thousand homes were destroyed. It’s two years now, and people are still doing it rough. We need investment to get these people rehoused; so once they’ve got housing they go back to work and education.

A lot of the delays in rebuilding are due to COVID. Even builders in cities have problems with supply. But need should be [the determining factor]. A person in a metro area who wants to build a McMansion is different to a person who has lost their home and is living in a container or a tent.

Q: You said that after health, housing affordability was the most common issue raised with you during the election campaign?

People were finding it almost impossible to have either long term rental accommodation or to buy or build homes. The ultimate expression of lack of housing availability is homelessness. We have significant numbers of people living in their cars, camping rough, people still not re-housed after losing their properties in the bushfires.

In the longer picture of providing accommodation, we need to look at the whole spectrum from long term rental to single occupancy alternatives, smaller homes for older people, and to be building communities with a combination of these, and to have the infrastructure that goes with housing – transport, renewables and telecommunications.

In this area, there are about 600 people on the social housing list, who are waiting up to ten years. Social housing should be incorporated into all our different villages and communities. And it would help to bring small towns alive again.

Q: You’ve described resigning from the Southern NSW Local Health District when you decided that politics was the only way to achieve what you sought for the Eurobodalla Hospital and local health services.  What is your political backstory, when did you become interested in politics?

I’ve always been professionally too busy to look at politics. I wasn’t interested in politics at university [though] I did have a “Shame, Fraser, Shame” sticker across the back of my car; my mother’s partner scraped it off the back of my car. I’m eternally gratefully that Gough Whitlam gave me a free university education.

Anyone who practises in health sees the social determinants of health. In obstetrics, you see the generational effects of the social determinants. In the 19 years, I’ve been at Eurobodalla, I’ve tried to advocate strongly for women’s health services because I think they’re neglected. I support self-determination in Aboriginal and Torres Strait Islander health services, and have advocated for the hospital design to enable Birthing on Country.

Some years ago I started a social media platform called ONE – One new Eurobodalla Hospital, advocating for one new, level 4 hospital.

[The page has 3,100 followers and on 20 January, Holland posted on the page, after announcing his plans contest the by-election, that: “This group was established as a non-partisan, grass roots campaign and in respect of this, I will not post directly until after the election. Remember that good physical and mental health is based on a healthy early start to life, secure housing & food, a good education, access to employment and income, respect for race, gender and sexuality, and an environment secure from further climate change. I will fight for that.”]

I align with Labor principles; that’s what’s in my heart. I was asked by [NSW Labor leader] Chris Minns whether I would stand; it was a pretty big decision personally and professionally. [During the campaign], I was very well supported by the party and the community.

I’ve been reminded by my colleagues not to forget my roots; I’m a very strong advocate for general practice. Rural generalists and rural proceduralists are the doctors that keep these rural hospitals running, providing general medical and surgical, obstetric skills, anaesthetic skills.

The bigger picture, which was really a catalyst to political action, is seeing the state-wide dysfunction in rural health. I’d like to be able to work initially in Opposition – but that doesn’t mean you don’t work with Government – and eventually in Government to try to resolve these problems.

Q: What have you learnt from the campaign?

The NSW by-election result was a reflection on politics in general, both federal and state. People are tired of discontinuous policy; they’re tired of the intermittent promises; people are seeing through pork barrelling; people want to see governments that make policy and follow it through during the term of their government.

I’m on the board of a social enterprise foundation that is looking at a multidisciplinary services for people with chronic health issues, The Circle Foundation, based on the Bromley By Bow Centre in London.

Q: What are your political ambitions?

I have to go to the polls again in March next year, so it’s a trial run. My aim is to be a good local MP over the next 12 months, get a foundation for what I need to achieve following the general election next year, my aim would be to be in Government and then to have a five-year plan.

• The interview transcript was edited. Photographs within the story were provided by Michael Holland.

See Croakey’s archive of stories about rural and remote health.