After the flash flooding; how one remote community recovered (and previewing the CRANAplus conference)

Hundreds of people were evacuated and their homes were devastated when flash flooding struck the small remote East Kimberley community of Warmun (also known as Turkey Creek) in March, 2011.

Two years later, the community has almost finished the rebuild. The experience, while traumatic, has also brought many positives, according to Monica Frain, a remote area health expert.

When I caught up with Monica for a quick chat last week, she had just returned from visiting Warmun, which lies about 860 kms east of her office in Broome (and about 3,000 km north-east of Perth).

Monica, Remote Area Health Services Manager of the Kimberley Population Health Unit, was speaking ahead of the CRANAplus conference, which will be officially opened tonight in Darwin.

She and her team of Remote Area Nurses and Population Health staff have worked with the Warmun community and other service providers over the past few years, and she says it has been an immensely satisfying experience.

It was important the community moved back on country as soon as possible after the flooding had passed, she says, and their involvement in the reconstruction has been “a good news story”.

Strong leaders had helped pull the community together, with a renewed focus on events like the mighty Warmun Eagles football team, a rodeo and a “Gija day”, celebrating their culture and community.

“The vision that they created for the community right from the word go was a really positive one,” says Monica. The taskforce charged with the rebuilding of the community, the Western Australia Natural Disaster Relief Arrangements (WANDRA) and WA country Health Service provided funds to ensure that the health service was established on site prior to any return to community – albeit in a couple of dongas and then a refurbished staff house.

The 19/2 Medicare exemption enabled more funds to be sourced for local health services with visiting doctors and specialists generating funding for the local community via Medicare billing.  One priority of the health service providers was to fund the coordinator of the community-based Gija Total Health committee.

The community’s new health clinic is due to be finished in December, and Monica is optimistic the community’s rebuild will have enduring health benefits.

“It’s one of the more satisfying things I’ve been involved with,” she says. “I can see it’s going to be long term. Situations can change rapidly in the world, so you have to grab these opportunities.”

For Monica, the Warmun story exemplifies how remote area nursing incorporates a dual clinical and population health focus that is not available in many jobs – and that the remote are workforce needs to be a skilled and diversified group.

Monica, who originally trained in psychiatric nursing and then worked in hospital nursing in Sydney, was first lured into remote practice in north Queensland almost 30 years ago because of her love of sailing. Then some further studies, combined with the experience of working on Palm Island, had her hooked.

“I had that holistic and psychosocial bent, as well as the clinical skills,” she says. “Remote area practice was something I could really get my teeth into.”

In 1995, she moved to Townsville, then onto Broome in 2005, and loves the diversity of the cultures and landscapes of the Kimberley.

She speaks warmly about working with the Kimberley Population Health Unit because of its wide-ranging focus on prevention, education and community development, as well as the provision of best practice acute care and chronic disease management.

“I know we’re not a huge organisation, and we face lots of challenges in remote service delivery but we’re providing a high level of service that’s got the right bent on quality and client participation, where the staff are obviously the most important resource. We really try to look after our staff and listen to them,” she says.

And, yes, Monica will be looking to recruit staff while at CRANAplus…“It is about spreading the word that the Kimberley is a great place to come and work,” she says.

“We’re always looking for people. If they’re thinking about remote area work or would like to put their toes in the water, then we try very hard to be supportive of that.”

As well as putting out the word about job opportunities in the Kimberley, Monica is looking forward to catching up with colleagues – and says that perhaps next year’s conference will feature a presentation about Warmun’s recovery.

And here is Monica at a previous CRANAplus conference (on R). 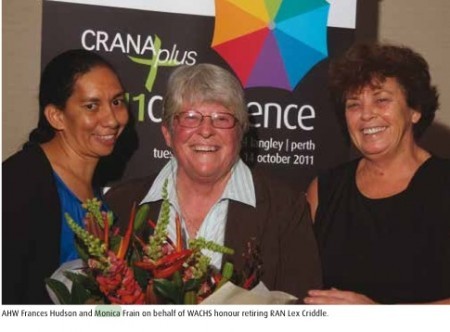 • Freelance journalist Rosemary Cadden and editor of the quarterly CRANAplus magazine will cover the conference for Croakey readers.