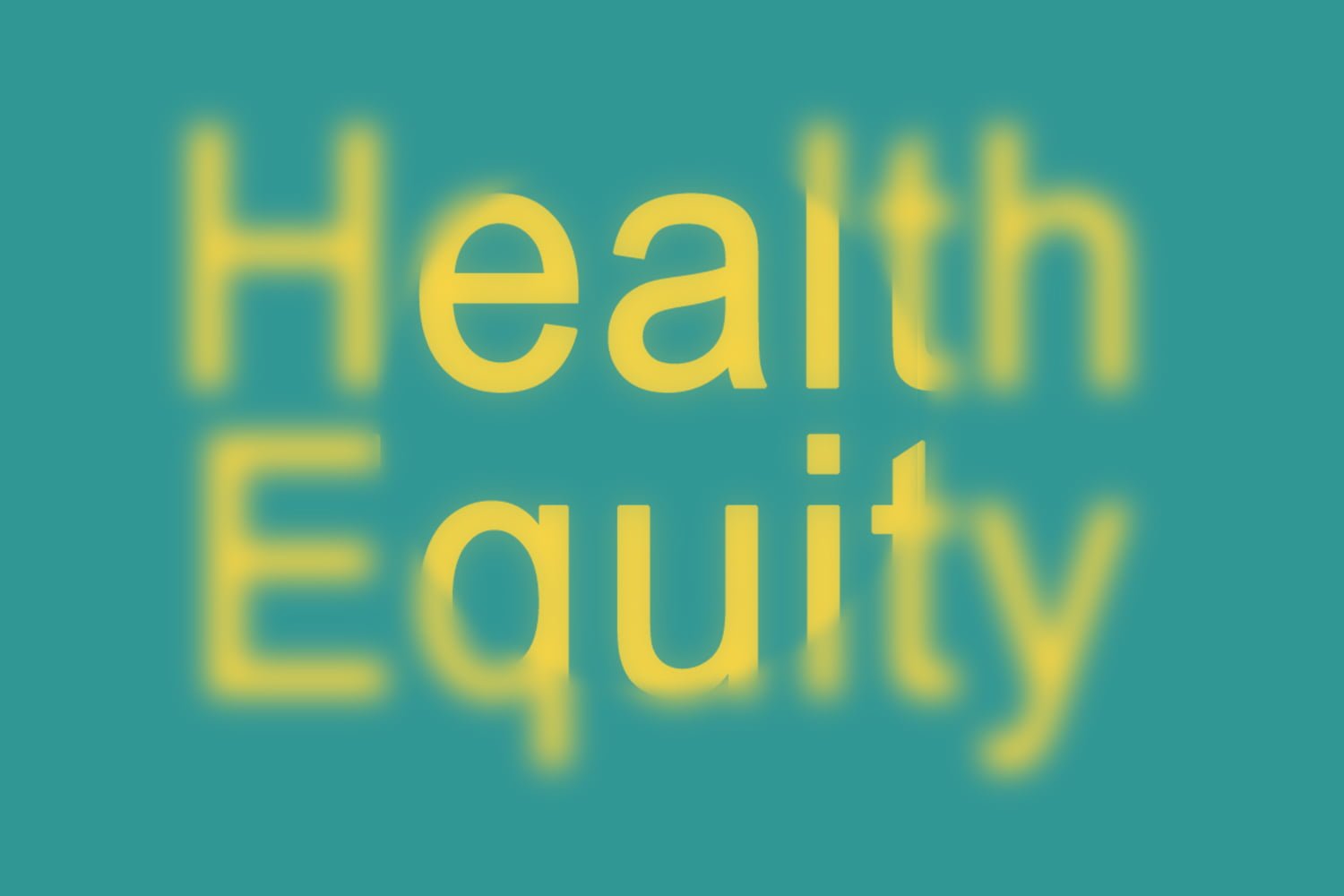 Ahead of 8th National Health Reform Summit, where is the focus on health equity in national policy debate?

As Croakey has previously reported, the Australian Healthcare and Hospitals Association (AHHA) has released a document suggesting some fundamental changes to the organisation, governance and funding of the health system.

The AHHA says health leaders, clinicians and patient representatives from around the nation, across the hospital, primary care and community sectors, informed development of the Healthy People, Healthy Systems,  Strategies for outcomes-focused and value-based healthcare:  a Blueprint for a post-2020 National Health Agreement.

While commending many elements of the document, Jennifer Doggett, chair of the Australian Health Care Reform Alliance (AHCRA), is disappointed it does not pay more attention to equity, access, and affordability. AHCRA is instead proposing a national dialogue on the future of healthcare.

No doubt there will be plenty of related debate at AHCRA’s forthcoming 8th National Health Reform Summit. Follow the discussions – they’ve already begun – at #AHCRA2018. 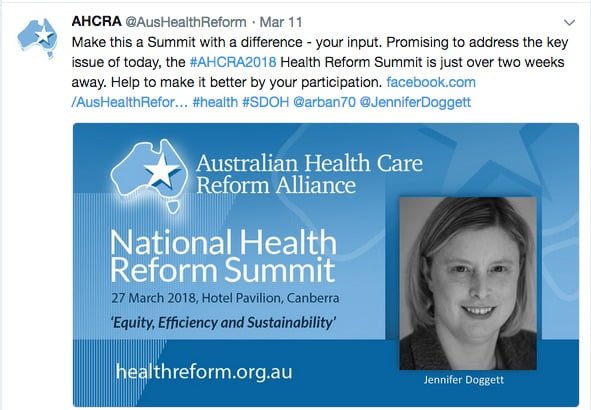 AHCRA understands the Blueprint was prepared by AHHA, with input from peak health groups and health leaders but without widespread community consultation.

While we appreciate that this type of consultation is outside of the scope of AHHA, we strongly feel that community engagement is an essential component of any future planning for our health system.

AHCRA has argued extensively for the need to engage stakeholders and the community in planning for the future of our health system.

In fact, one of our key policy objectives is for a ‘Conversation with Australia’, i.e. a broad and multi-faceted consultation process with the community in order to obtain their views on key aspects of our health system, such as the balance between public and private funding.

This process has taken place in other countries – notably Canada via the Romanow Commission– with useful and informative results. Without this type of input from the community AHCRA believes that discussions about the future of our health system will necessary be limited.

Despite this, we believe that the Blueprint is an impressive document. AHCRA strongly supports the focus on outcomes and the emphasis on data as central to improving outcomes. We also endorse the integration of services and regional funding as clear priorities for health system reform.

We would, however, like to challenge one key statement made in the Blueprint: ‘Australians have had access to universal healthcare for more than 30 years,’ (Page 10)

AHCRA strongly believes that the starting point for developing a future plan for our health system should be an acknowledgement that Medicare, including the Pharmaceutical Benefits Scheme (PBS) and public hospital funding, is not universal healthcare.

What these programs deliver, in our view, is universal health insurance (rather than universal health care) which delivers access to a (often inadequate) Medicare rebate for doctors’ services (particularly for specialist services) and a limited range of allied health services and child dental services. It also delivers access to prescription pharmaceuticals, dependent on a co-payment (in most cases) and free at the point of service access to public hospitals.

As Croakey readers would be aware, public hospital access is often not timely, with some people having to wait years to receive common elective surgery procedures. Co-payments, whether imposed by government (PBS) or at the discretion of providers, combined by geographical and cultural barriers to access result in 14% of Australians having access barriers due to cost.

Thus Australia rates 4th on access (out of 11 high income countries) but also only 7th on equity This is despite an overall ranking of 2 – meaning that while at the population level our health system performs relatively well, this result hides the inequities which exist across our system.

AHCRA acknowledges that with respect to outcomes Australia’s health system is second to none. However, this does not mean we shouldn’t improve. All the health systems to which we are being compared also have some significant flaws, including inequities of access across their populations.

Also, it is important to note that the outcome measure in this assessment looks at population figures for mortality and morbidity across different age groups but tells us nothing about distribution across socio-economic groups, geographical location, or cultural or gender background.

AHCRA appreciates that the Blueprint does state concerns regarding equity, access, and affordability, e.g.

‘to ensure high quality care that is equitable, accessible and affordable. Health budget sustainability must include the concept of affordability for individuals and communities while acknowledging capacity to pay and individual/family/community health vulnerability.’ Page 11

‘to ensure high quality care that is equitable, accessible and affordable.’ Page 12

We welcome the recognition that racism is an important issue affecting health outcomes as this is often not mentioned as a barrier to achieving greater equity and improved health outcomes in our health system.

We also note that in the recommendations the Blueprint does indicate the My Hospitals data and the Australian Atlas of Healthcare Variation as measures which address some of these issues.

However, overall we feel that there is an insufficient focus in the document on inequity as a major problem with our health system. For example, there are no specific recommendations on the need for more data on equity, access, and affordability in order to guide future planning.

Similarly, regional funding to address areas of need is supported in the Blueprint but the fundamental inequities associated with fee-for-service funding systems and other forms of funding, such as private health insurance subsidies, are not addressed.

The political context is important. The Blueprint has been prepared in answer to a request by a Federal Government which has demonstrated a lack of concern for equity. Indeed, it has affirmed the need for copayments to reduce service use irrespective of any information on the need for such services.

Similarly the Opposition has indicated its support for ongoing PBS copayments despite the evidence that copayments impact most on the most needy. In addition, both major parties support ongoing taxpayer-funded subsidies for private health insurance, despite the long public hospital waiting lists.

Seen in this light, with both major political parties less than enthusiastic about equity in our health system, the Blueprint may take us a little further towards an improved health system. However, AHCRA is disappointed that ‘the voice of public healthcare’ has not given more attention to equity, access, and affordability.

• Jennifer Doggett is chair of AHCRA, and an editor at Croakey. Make sure to follow @JenniferDoggett for previews and coverage of the AHCRA conference, as per below. 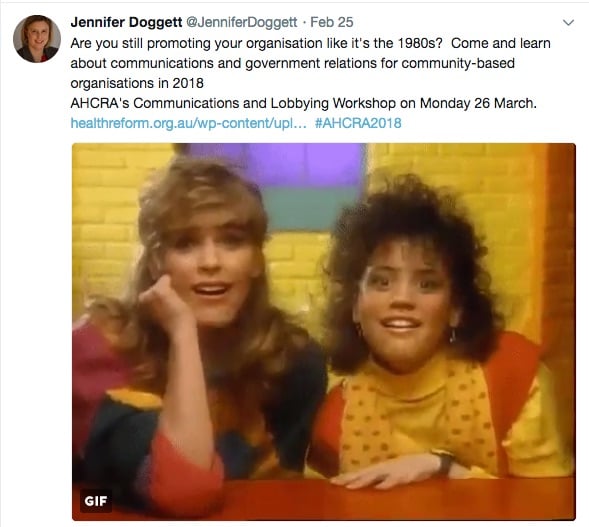