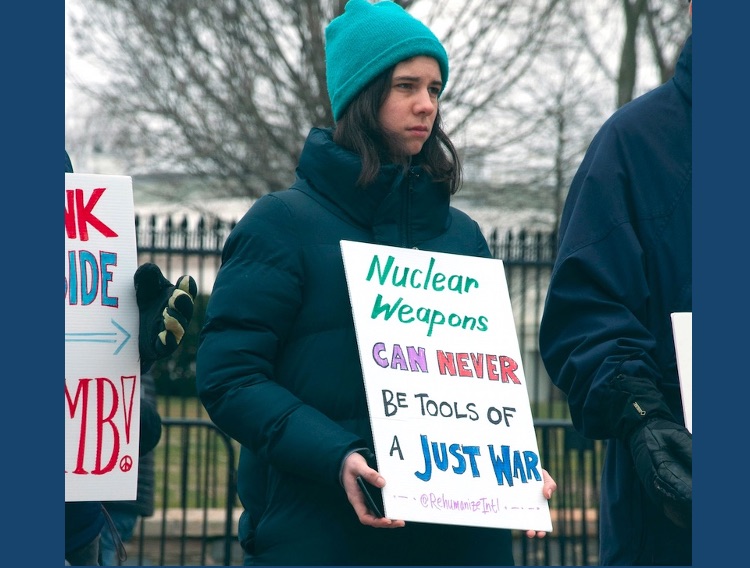 Photographed outside White House, Washington, DC, US, 2019. Photo by Maria Oswalt on Unsplash

Ahead of critical global talks on nuclear weapons ban, health and community leaders urge the Albanese Government to act

Introduction by Croakey: At a time when experts warn the world has not been this close to nuclear war since the Cuban Missile Crisis of 1962, more than 100 governments will participate in landmark talks in Vienna this week that aim to progress the eradication of nuclear weapons.

The Australian Government will send a delegation as observers to the first United Nations Meeting of States Parties of the Treaty on the Prohibition of Nuclear Weapons (TPNW), from 21-23 June. The treaty came into force on 22 January 2021.

The International Campaign to Abolish Nuclear Weapons, Australia (ICAN Australia) has welcomed the Albanese Government’s decision to engage with this critical meeting – as a step towards signature and ratification.

“Australia’s decision to attend the meeting heralds a new era in our approach to nuclear disarmament and non-proliferation,” said Gem Romuld, Australian Director for ICAN.

“We hope this will lead to early action by the new Labor Australian Government to sign and ratify the Treaty, in line with its pre-election commitments. We know that 76 percent of the Australian public want Australia to join the nuclear weapon ban, with only six percent opposed.”

NSW Labor MP Susan Templeman, Federal Member for Macquarie, who last year said Australia “can and should lead international efforts to rid the world of nuclear weapons”, will lead the Australian delegation.

Dr Sue Wareham OAM, President of the Medical Association for Prevention of War (Australia), writes below that despite the perilous state of the world, there are grounds for optimism.

Let’s have some good news, of governments working together – along with civil society – for a more secure and healthy future for us all, fighting back against pressure from those who are complicit in creating our biggest health threats.

This coming week, from 21 to 23 June, such an event will be taking place in Vienna.  It is expected that over 100 governments, and many campaigners, will be gathered to ramp up the momentum to advance the abolition of nuclear weapons.

Thus the “good news” comes in response to a dire threat to global health.  But we must celebrate progress.

The occasion will be the first Meeting of States Parties (MSP) of the Treaty on the Prohibition of Nuclear Weapons (TPNW). It will be the first intergovernmental conference on nuclear weapons since the start of the Ukraine war, in which Russian President Putin has threatened to use these weapons.

Putin is not alone in issuing such threats, the US having done so on multiple occasions; in addition, the ever-present risk of accidental launch is still with us. Without a change of course, one day our luck – for that is all that has saved us thus far – will run out.

The TPNW came into effect in January 2021 and is ground-breaking in its significance.

It is the first and only global legal instrument to prohibit all aspects of the development, testing, production, transfer, encouragement or any other act that gives legitimacy to these weapons, as well as, of course, their use or threat of use.  There are currently 62 states parties, with more expected very soon.

A primary purpose of the Treaty is to stigmatise the weapons and those nations that keep them. Nations can choose to be associated with threats of global destruction or with getting rid of such threats.

For health, the stakes are high.

The detonation of nuclear weapons produces incinerating heat, powerful shock waves and overpressures, ionizing radiation, an intense electromagnetic pulse, and massive amounts of smoke and soot that can alter the Earth’s climate. …[They] instantaneously wipe out entire populations, level cities, and devastate the environment…

Moreover, the environmental consequences of nuclear war, including severe climate disruption, can lead to global famine…”

Underlining our current dangers, the paper stated that, “The world has not been this close to nuclear war since the Cuban Missile Crisis of 1962”.

Further medical evidence was provided in 2021, in the publication by ICAN, the International Campaign to Abolish Nuclear Weapons, titled “No place to hide: nuclear weapons and the collapse of health care systems”.

It modelled the detonation of a single 100-kiloton airburst nuclear explosion (“small” by today’s standards) over each of nine major cities around the world, and examined how many hospital beds, doctors and nurses would be left to treat hundreds of thousands or more injured people. As the paper’s title suggests, no health service could respond in either the short or long term.

While Australian cities were not included in the study, our cities are not necessarily safe from the big power rivalry in which our major ally, the US, is engaging.

Such is the success of the awareness-raising that has taken place about the health and humanitarian impacts of nuclear weapons, that the very same leaders who publicly hold fast to these weapons paradoxically recognise that they must never be used.

In January this year, the five major nuclear-armed nations (the US, Russia, China, France and the UK) affirmed in a statement that “a nuclear war cannot be won and must never be fought”.

However, the statement attempted to justify possession of the weapons on the grounds that they “deter aggression, and prevent war.”

If that dangerously false claim needed any further debunking, then the invasion the following month of Ukraine by Russia ­– triggering a proxy war between the world’s two most heavily nuclear-armed nations – provided it.

The nuclear armed nations are now on notice that their policies fail on every ground – morally, legally, strategically and as an overwhelming threat to global health.

The stranglehold of these nine nations (the above five, plus India, Pakistan, Israel and North Korea) over nuclear weapons discourse has disappeared.  US allies – not themselves nuclear-armed but complicit with nuclear weapons policies – are starting to realise that they can no longer ignore and boycott the TPNW as they have done to date.

In a very significant move, several NATO members and other European nations (Sweden, Finland, Switzerland, Norway and Germany) have indicated that they intend to attend the MSP this week as observer states.

Even more significantly, Australia – which has also been complicit with nuclear weapons policies thus far – has just elected a Government committed to nuclear disarmament action.

In 2018, the ALP resolved that when in government they would sign and ratify the Ban Treaty (TPNW), after taking account of three factors (see here). The policy was reaffirmed in March 2021. Prime Minister Albanese is a strong supporter.

An Australian Government representative will attend the MSP as an observer, contrasting with the hostility of the previous government towards the Treaty.

For those of us not in Vienna, there will be opportunities to connect with those who are. ICAN is hosting several “hubs”– a mix of online and in-person gatherings – in Port Augusta, Fremantle, Brisbane and Melbourne, to which all readers are warmly invited. (Details are here.)

The challenges ahead are huge, but progress is indeed cause for celebration.

Events in Vienna and Australia 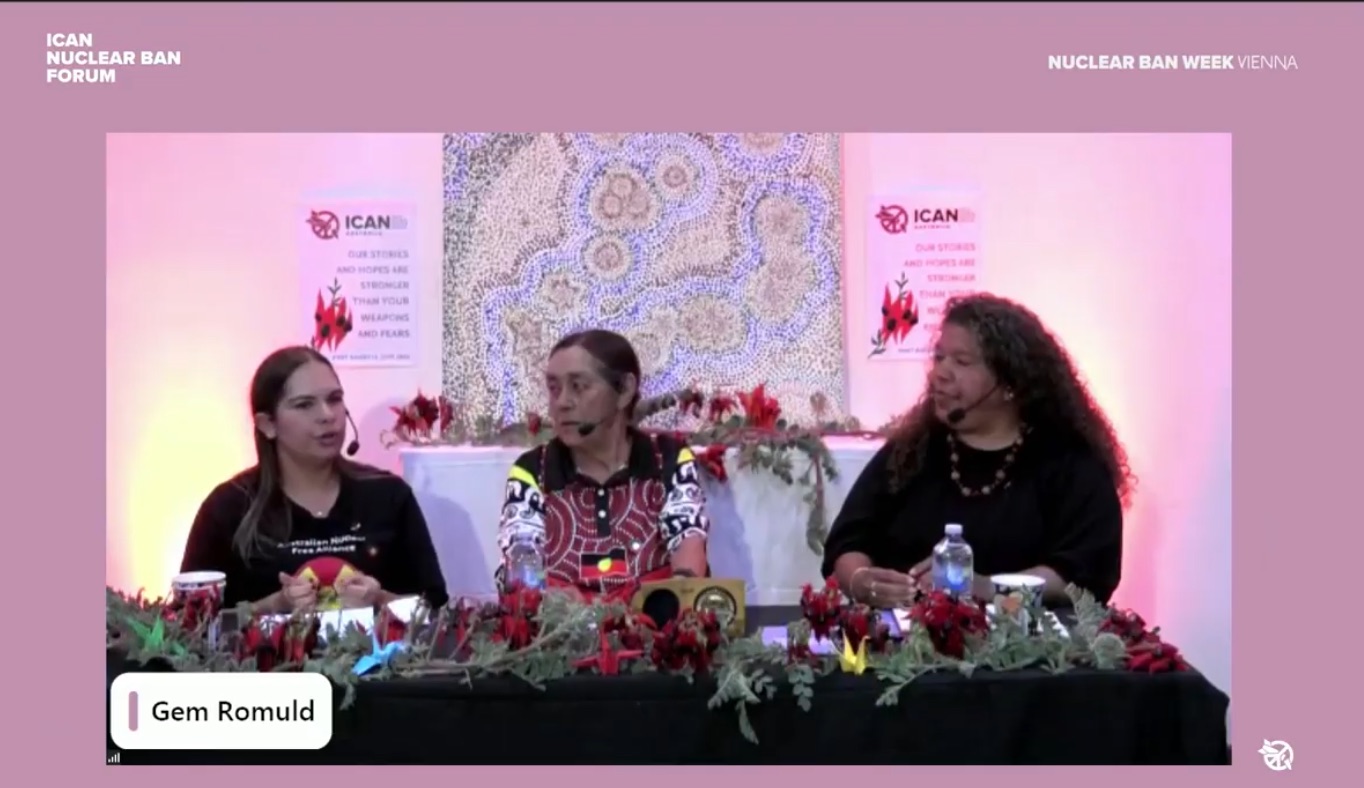 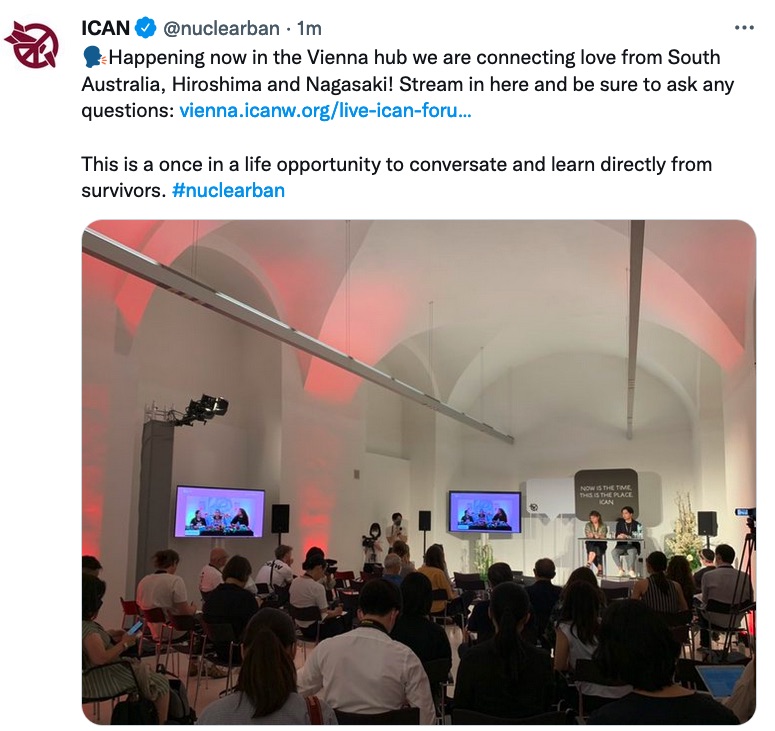 Monday, 20 June: Conference on the Humanitarian Impact of Nuclear Weapons, hosted by the Austrian Government, to hear updated expert analysis of nuclear risks and consequences, including what the effect of detonating nuclear weapons in Europe would be.

Tuesday to Thursday 21-23 June: first UN Meeting of States Parties to the Treaty on the Prohibition of Nuclear Weapons, in Vienna 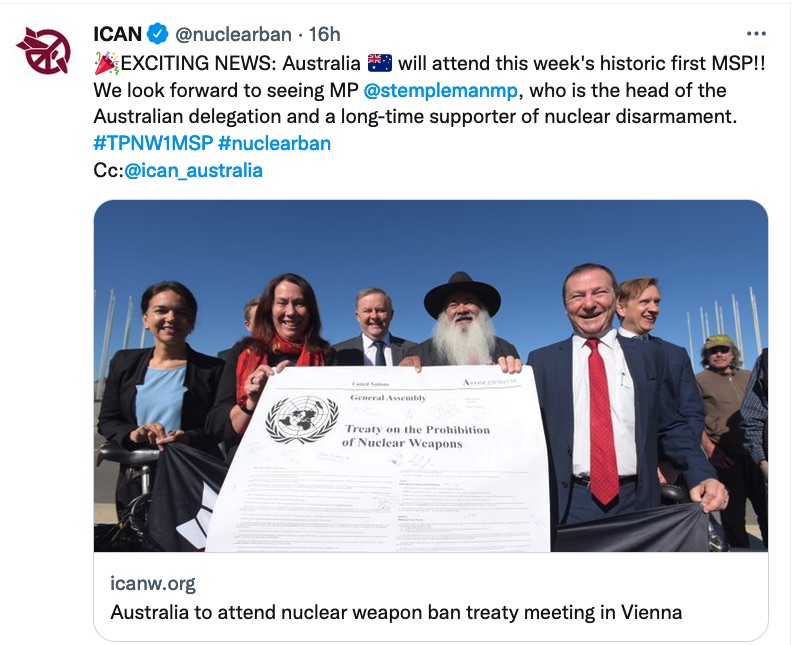 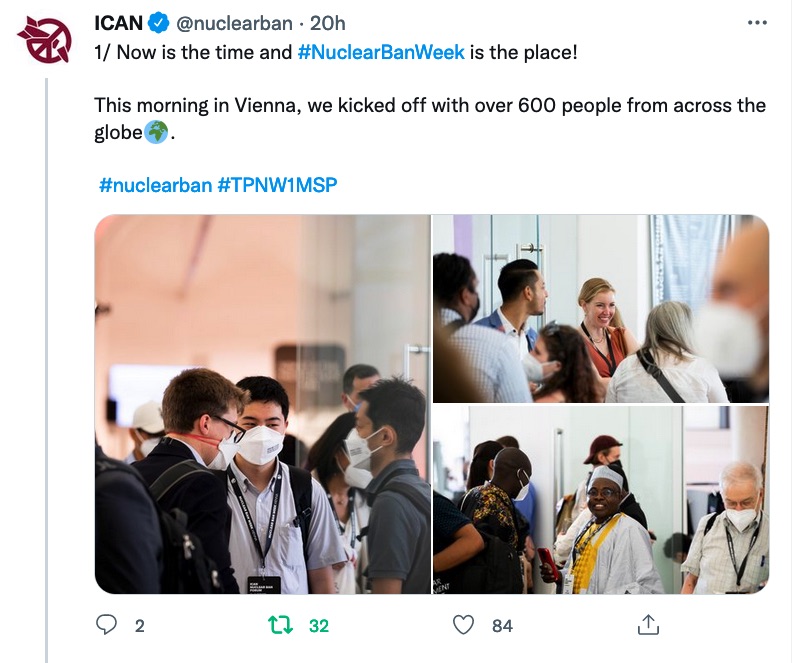 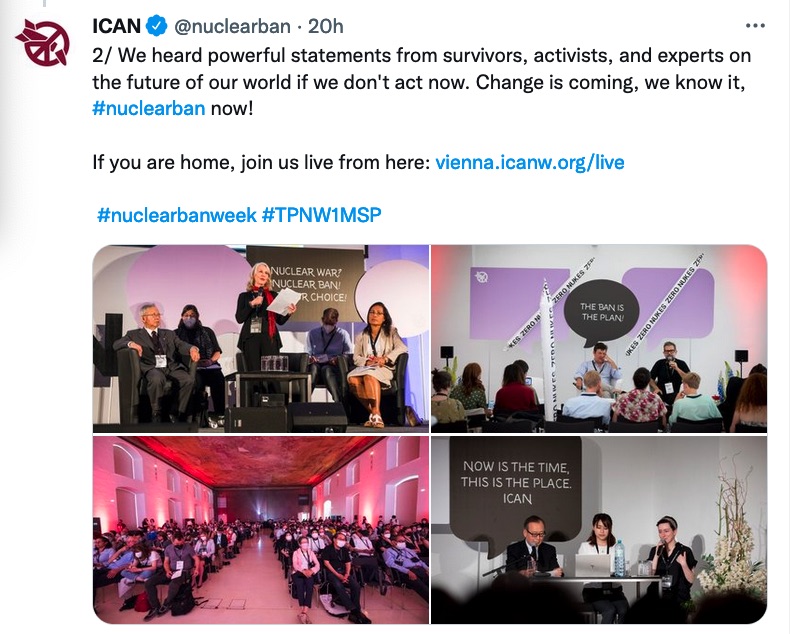 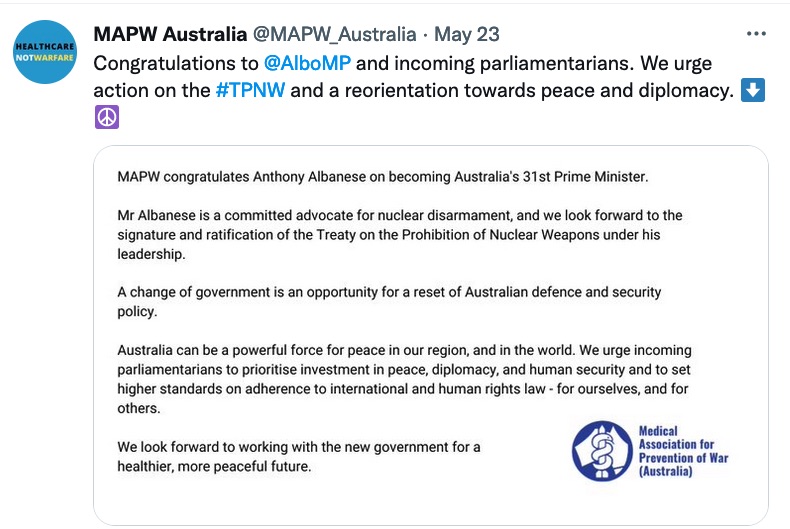 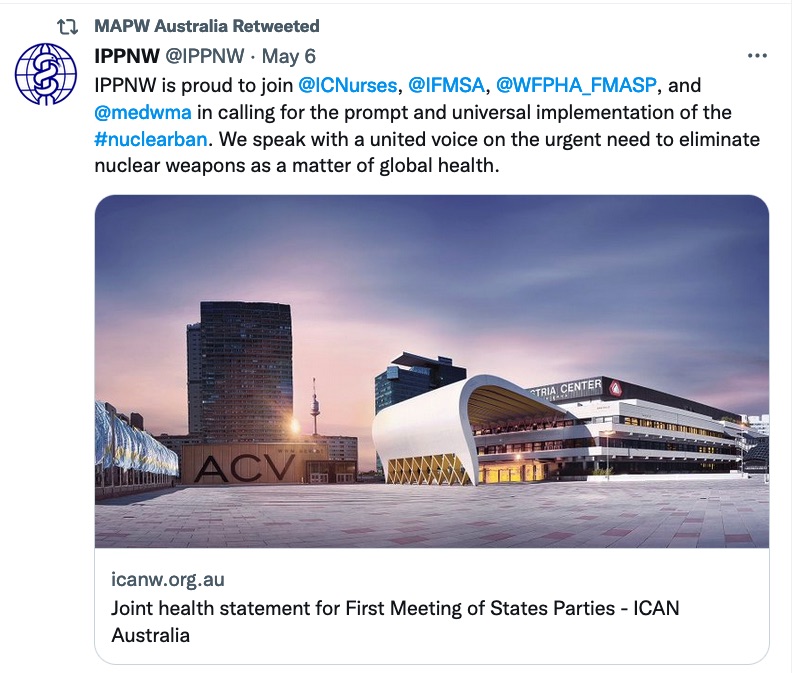 Read the statement from International Physicians for the Prevention of Nuclear War.