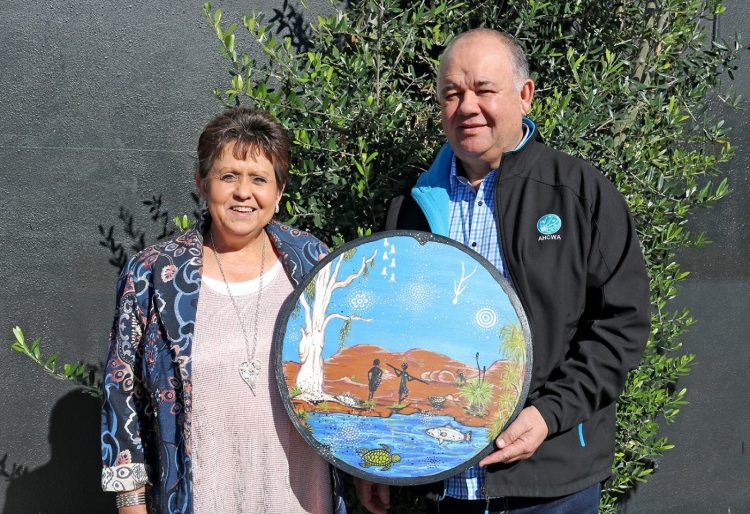 Ronda Clarke and Des Martin with the artwork. Photograph by Natasha Gillespie from AHCWA

Ahead of landmark climate and health report, an artwork tells of the harmful impacts

The Western Australian Government is expected to release a landmark investigation into climate change and health in WA later this month.

One of the submissions to the Climate Health WA Inquiry came in the form of a deeply meaningful artwork, reports Jade Bradford, a proud Ballardong Noongar freelance journalist based in WA.

This article is published as part of Croakey’s contribution to the #CoveringClimateNow collaboration.

White dots come down from the sky, they rise from the bottom and are in the waterways. The waterways are home to species of fish and turtles which are swimming around. On the banks near the water’s edge are the turtle’s nests.

Two First Nations people are standing nearby on the land – a man and a woman, under a shady tree. The woman is pregnant. Behind them in the background, a kangaroo hops through the plants used for bush tucker and traditional medicines. The white dots affect every living thing in the painting.

The white dots symbolise climate change as a disease.

The painting, the visual view of climate change was inputted [and the story] from the 23 Aboriginal Community Controlled Health Services [across WA], and it was just me putting the paint to canvas.

It was the ACCHS’s and their communities’ story to be told, not mine and this is how they wanted it told.”

First Nations people are increasingly aware of the impacts of climate change on their communities and surroundings. AHCWA and ACCHS work hard to ensure First Nation’s people have the same level of healthcare available to them as all Western Australians.

The artwork was created to include in AHCWA’s submission to the WA Department of Health’s Climate Health Inquiry.

The inquiry was announced in March 2019 in response to the State Government’s Sustainable Health Review. The inquiry reviewed the health system’s capacity to respond to the health impacts of climate change and will make recommendations for improvement.

Ronda Clarke said CEOs from the ACCHS wanted to present a visual to communicate their concerns to governing bodies in a more powerful way. She said AHCWA and ACCHS workshopped the topic ‘climate change’.

From the workshop, the painting and a submission were provided to the inquiry on behalf of the ACCHS and AHCWA.

Clarke explained it was important to the ACCHS that the direct effects of climate change on First Nations’ people were heard and understood by the WA Government.

“Words sometimes get blurred and you only pick up what you want to see. Whereas if a picture is in front of you, you are getting the whole view,” she said.

From climate change to COVID-19

Clarke’s artwork and AHCWA’s opening statement to the inquiry poses the question: if we were to call climate change a disease, would more people take notice?

Climate change has had a big impact on the social and emotional well-being of our people. I’ll use the Kimberley region as an example; the roads get cut off, things get washed away, the fish in the waterways have changed.

There are lots of waterways that have dried up, rivers have changed paths, and grown wider, these events have cut off sacred areas, and the land in some areas across WA have changed.

Where people could access bush tucker and bush medicines, which are traditional to our mob, some of these things are gone, or you can’t see anymore.” 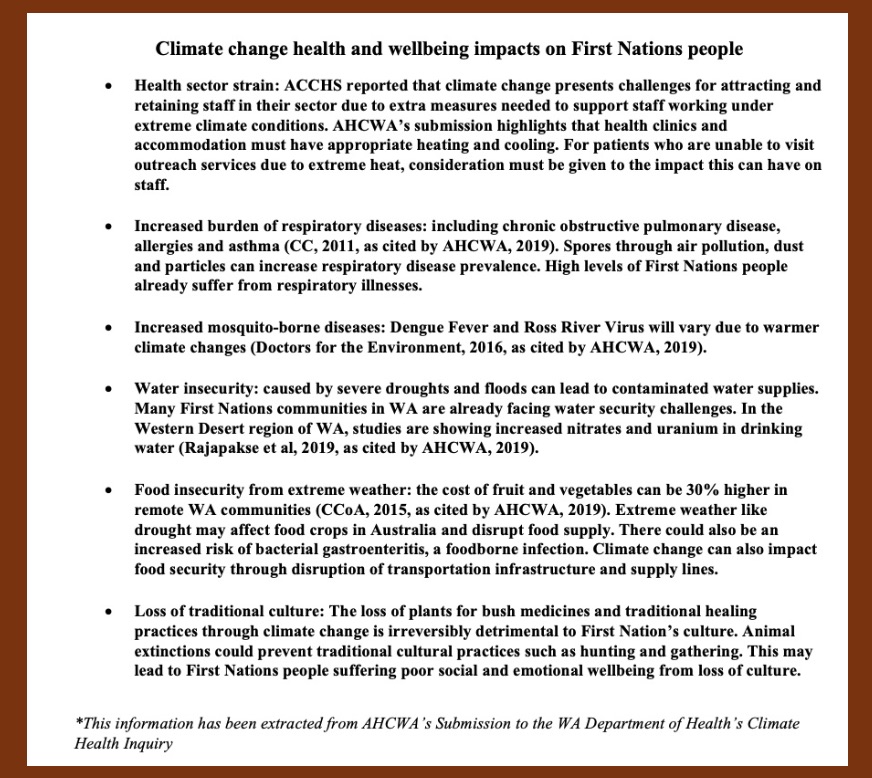 The CEO of AHCWA, Des Martin, said similar responses and investments to the Government’s response to the COVID-19 pandemic were needed to address climate change.

“AHCWA and its members are very mindful of the threat and impact that climate change is having on land, country and the ecosystem, and more so to the overall health and wellbeing of Aboriginal people, their communities, culture, and traditional customs and practices,” he said.

Both Clarke and Martin agreed the work undertaken by AHCWA and ACCHS in the fight against COVID-19 has shown mainstream services that First Nations people have the systems in place to deal with complex issues.

ACCHS expressed in their submission that the WA health system needed to take on more responsibility and consult with First Nations communities when making decisions.

Martin said AHCWA and ACCHS had welcomed the opportunity to provide a submission to the inquiry and acknowledged former Chief Health Officer, Professor Tarun Weeramanthri, for including the ACCHO sector as part of the feedback process.

“Tarun has been a driver for the last few years. We have done a fair bit of work alongside Tarun in his role,” Martin said. “It’s people like Tarun that have ensured the Aboriginal voice has been considered and factored into the various discussions.”

Ronda Clarke agreed, saying it was important governments acknowledge First Nations people with a place at the table.

“The Elders are out there and it’s about respecting them, they’re the ones who notice the changes and it’s those stories that are passed on from family to family and this is a part of our heritage and history,” she said.

Clarke said AHCWA and ACCHS are proud they were asked to present to the inquiry and have the opportunity to explain how climate change is affecting First Nations health services across WA.

“To actually be acknowledged, this was a huge achievement and honour,” she said.

AHCWA is now waiting for the WA Government’s response to the report, which is expected later this month.

Jade Bradford is a proud Ballardong Noongar freelance journalist based in WA. She has been taking part in The First Nations Messaging and Narrative Shifting Project, which aims to identify the most effective language and messaging to support First Nations self-determination and empowerment. On Twitter, follow @Jade_Braddy 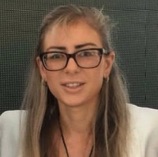 Correction (25 August): When first published, the feature image was incorrectly attributed to Jade Bradford. It was taken by Natasha Gillespie from AHCWA.

This article was funded by Croakey’s crowdfunding campaign at Patreon. We acknowledge and thank all supporters. If you value our climate and health coverage, please consider supporting the campaign.

It is published as part of the Covering Climate Now initiative, an unprecedented global media collaboration launched last year to put the spotlight on the climate crisis in the leadup to a Climate Action Summit at the United Nations General Assembly in New York. It is co-founded by The Nation and the Columbia Journalism Review (CJR), in partnership with The Guardian.