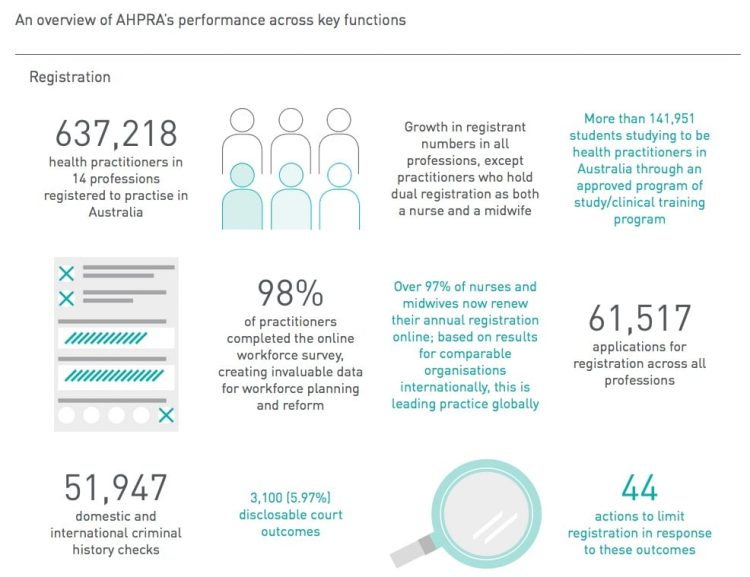 Croakey recently reported on a critique of the first five years of the national registration scheme for the health professions that had been published by the Australian Health Review.

We then ran an article by the author of that critique, Dr Kerry Breen, a physician, and a past President of the Australian Medical Council and of the Medical Practitioners Board of Victoria, in which he called for a major overhaul of the “flawed” system.

Martin Fletcher, Chief Executive Officer of the Australian Health Practitioner Regulation Agency (AHPRA), responds to these articles below, stating that while there remains room for improvement in the national scheme, “it would be unwise to ‘turn the clock back’ on the system of medical regulation in Australia, create more upheaval and risk the benefits of what has been achieved to date”.

In his recent comments, Dr Kerry Breen criticises the National Scheme regulating health practitioners and refers to the Independent Review of the scheme carried out for Health Ministers.

He doesn’t mention that Health ministers agreed with the assessment of the Independent Reviewer that while some changes will improve things, the National Scheme is acknowledged as among the most significant and effective reforms of health profession regulation in Australia and internationally.

Ministers highlighted that the community can have confidence that health professionals providing treatment and care in Australia meet a national standard based on safe practice; that there is increased mobility for individual practitioners because they no longer need to be separately registered in each jurisdiction, and; the public is better protected because health practitioners who have committed misconduct and faced regulatory action can no longer practise undetected in other states or territories. There is now a national public register that shows if a practitioner has restrictions on their registration.

The national regulation of more than 630,000 health practitioners – including 100,000 medical practitioners – is undoubtedly a large and complex undertaking. I would be the first to say the National Registration and Accreditation Scheme is not perfect and that there continue to be areas to improve. However, I am also confident that we have taken major strides over the past six years and it is getting better all the time.

Dr Breen also highlights the findings of the NRAS Review in relation to the need to improve our response to complaints about medical practitioners. This is an important area in which we have worked very hard to reduce time-frames, improve communications and ensure good regulatory decision-making.

While Dr Breen has not discussed his recent “review” of our work with me, I understand he made an enormous contribution to the regulation of medical practitioners in Victoria some time ago. I respect his views and understand the temptation to look back on the past fondly.

Not everyone understands how the National Scheme works. Let me start with AHPRA. We are a national organisation with a local focus and a local presence in every state and territory with direct accountability to all health ministers.

We administer the day-to-day work of national registration in partnership with boards. We have clear lines of accountability and reporting to Health Ministers both individually and collectively and to state and territory parliaments. See our latest annual report.

So how are we trying to achieve that goal?

Let me take the example of the regulation of doctors in Victoria, Dr Breen’s home state. On a day-to-day basis, it is not that different from what happened before the National Scheme. There is a local Victorian Medical Board. It is appointed by the Victorian Health Minister. It is made up of both Victorian doctors and community members. It makes all of the regulatory decisions about medical practitioners in Victoria, who are assessed against national standards. These decisions draw on the careful judgement of Board members, based on the issues before them and their deep understanding of the Victorian health context.

The Victorian Board is supported by a local team of AHPRA staff in our Victorian office. A number of our staff worked with regulatory boards in the previous system. The Board and AHPRA work closely with the local Health Services Commissioner, the Victorian Department of Health and Human Services and deal with the local Tribunal (VCAT) for serious matters.

Similar arrangements are replicated in most other states and territories, noting differing arrangements for co-regulation in NSW and Queensland. This is how the National Scheme strikes a balance between the benefits of a national approach, and the strength of local arrangements for dealing with individual medical practitioners.

Dr Breen argues that our move towards national regulation has seen us drop behind our international counterparts such as Canada, where he argues different medical boards across the provinces and territories continue to drive competition and improvements.

This opinion stands in stark contrast to a report on health care quality released by the OECD last year, which found that Australia’s ‘national system for regulating 14 health professions makes Australia a leader among OECD countries’.

The National Scheme is something of which to be proud. We need to keep building on the opportunities it creates to serve the Australian community better.

I am always open to ideas for improvement, but believe it would be unwise to ‘turn the clock back’ on the system of medical regulation in Australia, create more upheaval and risk the benefits of what has been achieved to date.

• The feature image is taken from the AHPRA annual report.

PrevPreviousWatch the latest research news on preventing violence against women & children
NextWhose problem is it anyway? Transforming the public health narrative to stem the tide of “lifestyle drift”.Next