Yesterday the Australian Institute of Health and Welfare (AIHW) released its Health expenditure Australia 2016–17 report. This report contains detailed data on expenditure throughout our health system and is a valuable resource for governments, policy makers and health stakeholders.

1. We need to spend more on public health.

As this tweet from the Heart Foundation’s Rohan Greenland highlights, Australia spends only 1.5% of total public expenditure on public health.

Given AIHW’s previous finding that 31% of Australia’s disease burden is preventable, the case for a greater investment into public health and prevention seems clear.

This view is also supported by the 2017 report Preventive health: How much does Australia spend and is it enough? by Hannah Jackson and Alan Shiell  found that Australia’s spending on prevention is considerably less than countries such as Canada, the United Kingdom and New Zealand.  Jackson and Shiell argued that Australia could and probably should spend more on preventive health, not based on a comparison of  spending levels among jurisdictions in Australia, or between Australia and equivalent OECD countries. But because of the cost-effectiveness of many preventive health interventions.  One strategy they propose to improve Australia’s approach to prevention is to establish institutional structures to evaluate the cost-effectiveness of preventive health interventions and monitor their outcomes.

Out-of-pocket health care costs (OOPs) remain the third largest source of funding for health care, after Federal and state/territory governments, and contribute around twice as much as private health insurance to overall spending. The impact these payments have on consumers is massive. Yet the policy attention given to this significant source of health funding is minimal.  We don’t even systematically collect data on OOPs, which would be, at the very least, a starting point for the development of a coherent policy.  Compared with the policy attention, political concern and regulatory infrastructure dedicated to private health insurance the efforts given to protecting Australian consumers from hardship due to large or unreasonable OOPs is woeful.  The one Government committee set-up to look at this issue is heavily weighted with medical practitioners, has very minimal consumer representation and has yet to produce any tangible solutions to this complex issue. According to the four communiques it has issued since its formation, it appears to be focussing primary on improving transparency of specialist fees – an important issue but only one small part of the overall OOP problem. 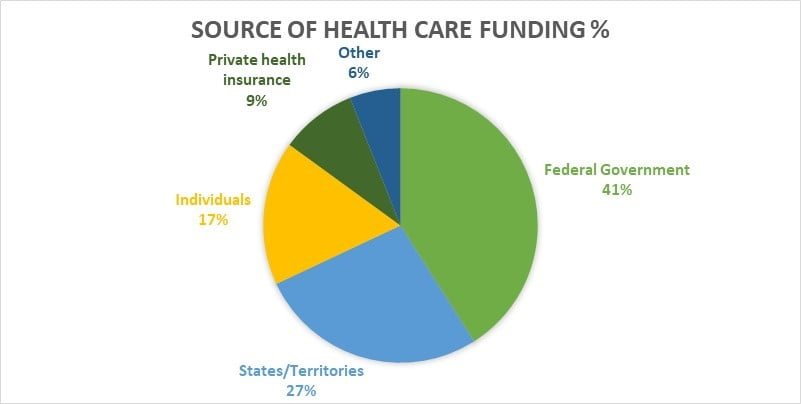 3. We need to redress the imbalance between GPs and specialists

Clearly all doctors in the health system have an important role to play and it is unproductive to play one specialty off against another, given their different and unique contributions and challenges.  However, in the case of general practitioners (GPs) it’s fair to argue that they receive less than their fair share of the health funding pie compared to their specialist colleagues.  This is a tricky area for governments as most of the disparate growth in funding to these two areas is in the area of OOPs, an area of spending not under government control.

As John Goss, Adjunct Associate Professor, Health Research Institute, University of Canberra writes in The Conversation, the average OOP for specialists, is now an average of A$155 per person, up 43% since 2011-12. In contrast, out-of-pocket payments for general practitioners were only A$31 per person, up just 4% since 2011-12.  This difference in growth does not reflect the increasing complexity of general practice and the higher demands faced by GPs today due to rising levels of chronic disease and multi-morbidity.   Given these major health care challenges, we should be investing in a primary health care workforce with the skills and resources to deliver high quality preventive, multidisciplinary, coordinated and integrated care.  This means shifting the balance of funding growth away from specialists and towards GPs and other primary health care providers.

As the graph below shows, dental costs made up the second highest single component of the average $1 221 spent on OOPs per person in 2016/17.  While it is less than the largest area of expenditure (non-PBS meds) it is arguably a more significant health issue as the non-PBS meds category includes expenditure on non-evidence-based products, such as many alternative and complementary medicines.  OOPs for dental services also had relatively high levels of growth since 2015/16 compared with other areas of health care. 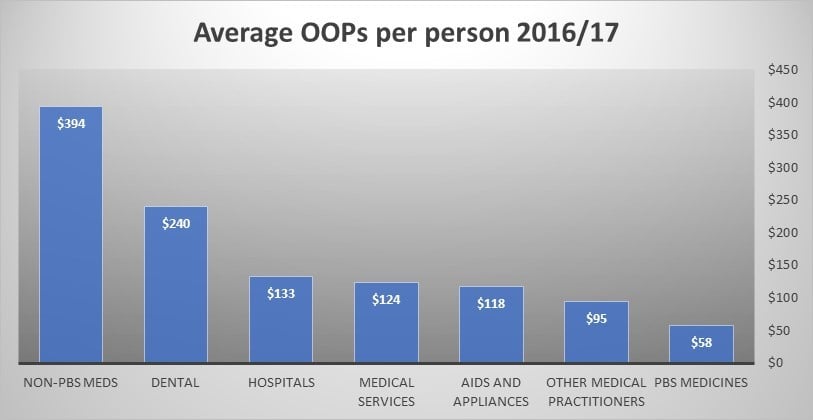 Successive governments have reduced funding for public dental programs and focussed on reining in the rising costs of private health insurance in order to reduce individual health care costs.  However, while some slow down in premiums has been achieved, this does not improve affordability if the OOPs associated with using PHI are high and continue to grow.   Professor Goss notes that even people with PHI still contributed 46% of their total dental costs – meaning that health fund members can only expect their funds to pay for around half of their dental care.  This undermines the capacity of PHI to influence overall dental costs and means that governments cannot continue to rely on PHI to provide affordable dental care to the community, even to those with PHI.

Professor Goss also points out, there is robust evidence that a significant proportion of the population is struggling to afford dental care.  A recent Australian Bureau of Statistics survey found that around 27% of the bottom fifth of the population, who are most disadvantaged, delayed or did not see a dentist when they should have in 2016-17 due to the cost.  Also relevant for a government which thinks PHI is the solution to affordable dental care, is the findings of another AIHW report that even among those with PHI, 20 per cent of them  delay or avoid going to the dentist.

5) Private health insurance is a bad deal for most people, most of the time (but particularly if you live in the Northern Territory)

The general public is way in front of governments when it comes to PHI and has been determinedly demonstrating its lack of enthusiasm by steadily dropping private health cover.

New figures from the AIHW report may help explain why.  In 2016–17, the report shows that net health expenditure by private health insurance providers averaged $1,399 per person covered.  There was some variation between the states and territories with residents of Tasmania ($1,520) and South Australia ($1,526) receiving the highest level of expenditure, almost twice the per person amount received by people in the Northern Territory ($820).

Compare this to the annual cost of an average PHI policy, and it’s easy to see why so many people think PHI is poor value.  PHI policy costs vary, but as an indicative figure, Medibank Private’s website quotes a basic hospital and extras policy for a single 40 year old woman as costing $1,853 per year.  This is a policy that has a $500 excess and which excludes many common health care services (obstetrics/pregnancy, fertility treatment, eye surgery and cataracts, hip, knee and other joint replacements, renal dialysis) and offers only limited coverage for palliative care, psychiatric care and rehabilitation.

It’s not difficult for many consumers to see why spending $1,853 a year on insurance premiums with the expectation of getting back $1,399 doesn’t seem like good value. Particularly when the health funds themselves are raking in record profits, BUPA’s half-yearly financial report showed that it made a net profit of $277m from its Australian and New Zealand operations and Medibank Private reported a half-year profit of $245.6m.  Perhaps these figures will finally convince the Government that when it comes to paying for their health care, consumers have got it right.